The review Naša reč (‘Our word’) was published in Paris from 1948 to 1958, then in London until 1990. Naša reč was printed in Serbian, initially every six weeks and from 1951 ten times a year. Democratically-oriented Yugoslav emigrants produced this journal for like-minded fellow emigrants in Western Europe and North America who opposed communism at home.

Although Naša reč advocated strongly against the communist political system imposed in 1945, it did not argue for a return to the pre-1941 regime in the Kingdom of Yugoslavia. Instead, it pleaded for a new democratic country as a community of free nations willing to live together in a federal state which would guarantee human rights and civil, social and religious freedoms to all citizens. Naša reč strongly believed in a western model of parliamentarian multi-party political system with a free press and free vote at its core. Its editors thought that the one-party system could be replaced by compromise and reform in a peaceful democratic transition. Naša reč provided a platform for political debate not only for Serbs but also for all Yugoslavs, and welcomed contributions from outside émigré communities.

As an open, independent, democratic and liberal, often unapologetically Serbian and yet genuinely Yugoslav phenomenon, Naša reč was unique among other South Slavonic emigrant publications published in Britain and in the west in this period. 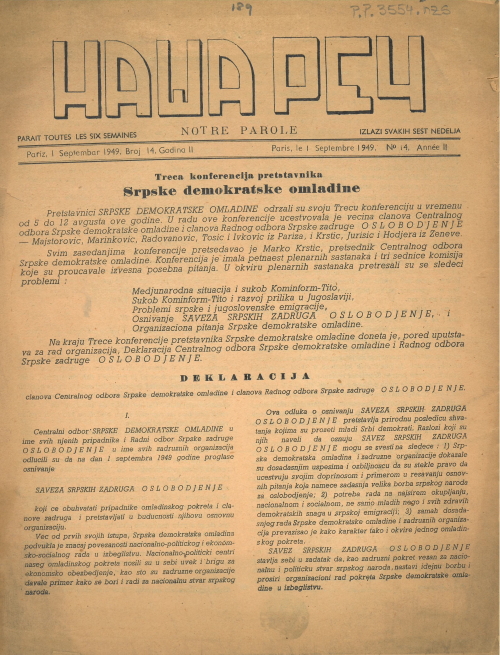 Permanent columns in Naša reč besides the editorial were Yugoslav and international politics, history and current affairs, topics from emigré life, book reviews, opinions and polemics, and letters to the editorial board as well as useful information about the review and its contributors over time. The review was open to political and cultural contributions in general. 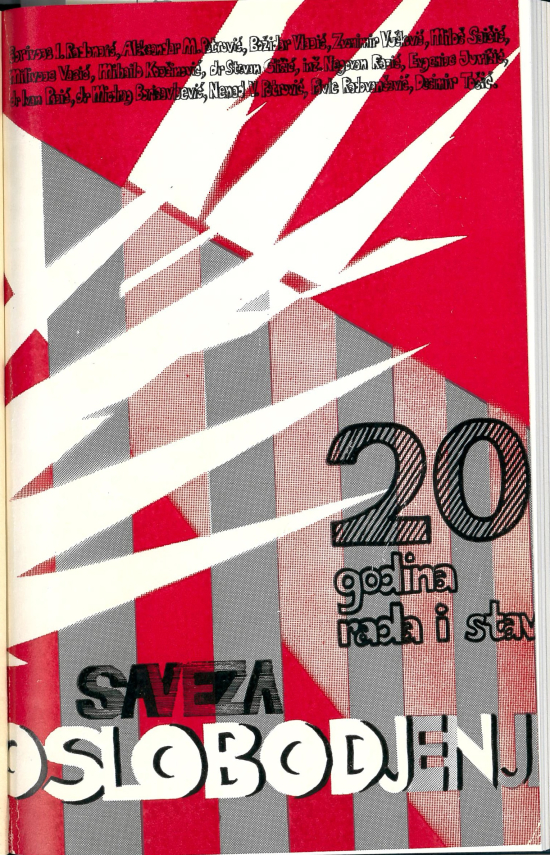 Naša reč was published by an alliance of Serbian political, social and cultural emigrant organisations in Western Europe called cooperatives. The membership of these cooperatives included the Young Democrats, the youth section of the Democratic Party, a major party in the Kingdom of Yugoslavia. The Union Oslobođenje (‘Liberation’) was founded in 1949 as an umbrella organisation for the Western European and North American cooperatives. Naša reč was its official newspaper, funded mainly by the membership, but also by subscriptions, sales and donations. 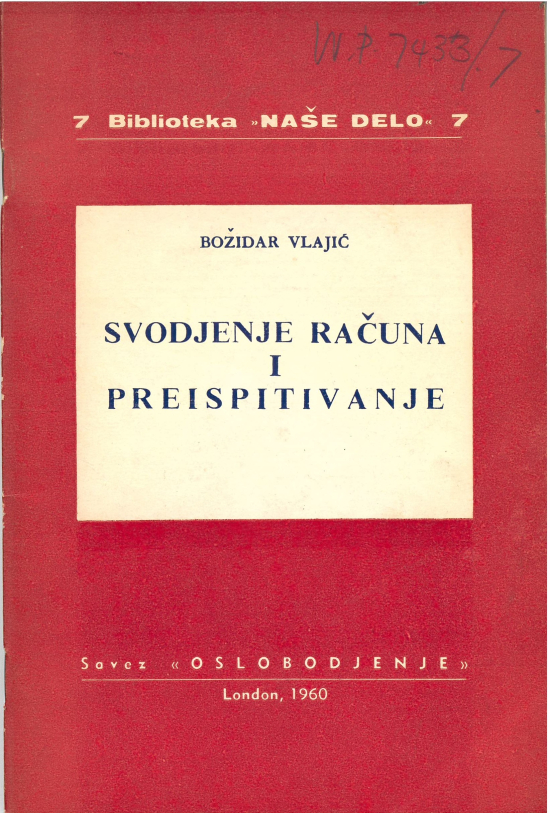 The majority of Oslobođenje’s members were young people born in the 1920s and 1930s. They belonged to the generation traumatised by enemy occupation and the ensuing civil war in Yugoslavia during the Second World War. Oslobođenje organised biannual conferences and published political programmes abroad, but its ideas, ideology and plans were designed for the country it intended to change. Oslobođenje wholeheartedly supported Yugoslav dissidents and gave them a voice in Naša reč, and over time collaboration was extended to democratically-minded people in Yugoslavia. After the death of the Yugoslav communist leader Tito in 1980, Naša reč began receiving contributions from that country, and by the late 1980s it was being discreetly distributed in Belgrade. 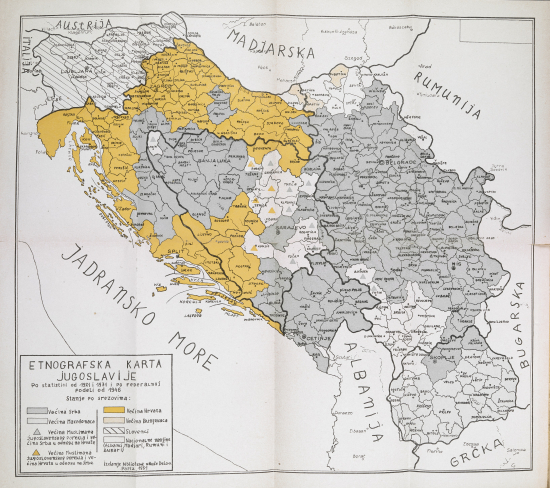 By creating a political model for a future multi-party system in the country, contributors to Naša reč were drawing on free thought, independent information, experience of public debate and critical media reporting in Britain. Between 1952 and 1988 the Union Oslobođenje published 17 books on Yugoslav political, historical, cultural and literary topics in the series Naše delo (Our work). While the review Naša reč was published solely in Roman script, giving the newspaper a Yugoslav character, the series Naše delo enabled authors to publish in both Roman and Cyrillic scripts. 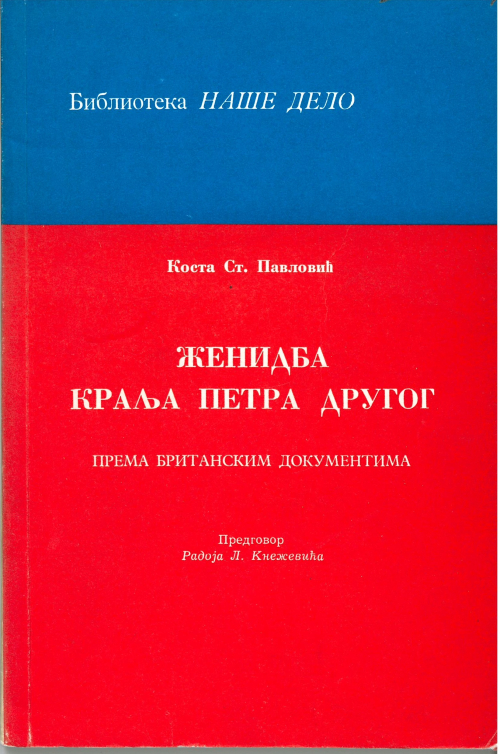 In addition to the review and the series, Naša reč printed 15 special editions as offprints or separate publications between 1964 and 1990. These were mainly works and pamphlets by Yugoslav dissidents and writers such as Milovan Đilas, Mihajlo Mihajlov, Miodrag Ilić, Gojko Đogo and others.

Leading figures of the Union Oslobođenje were behind all its publishing activities. Desimir Tošić was the sole editor of Naša reč and the chief writer of editorials together with Božidar Vlajić, a pre-war politician and prominent member of the Democratic Party.

A major permanent subject of political debate in Naša reč was the national question in Yugoslavia. Naša reč advocated a compromise and sought a solution that would command the support of the majority in each of the Yugoslav nations. The preferred option for Naša reč was a federal multi-party parliamentary state such as Switzerland, but it was also open to a Yugoslav confederation, self-rule or independence for the Yugoslav nations. The standpoint of Naša reč and the Union Oslobođenje in this matter was that the nations of Yugoslavia, not its constituent republics, should decide on the future form of government and state.

In the end Naša reč didn’t find an answer to the key question of the first and the second Yugoslavia, but believed in the future of the ‘Third Yugoslavia’, a democratic country of free and equal nations and citizens. With the renewal of the multi-party system in Yugoslavia in 1990 Naša reč ceased publication, and the Union Oslobođenje was able to transfer its ideas and experiences into the newly-founded Democratic Party in Serbia. In his last editorial Tošić declared that the journal had completed its mission but the struggle for democracy continued at home. 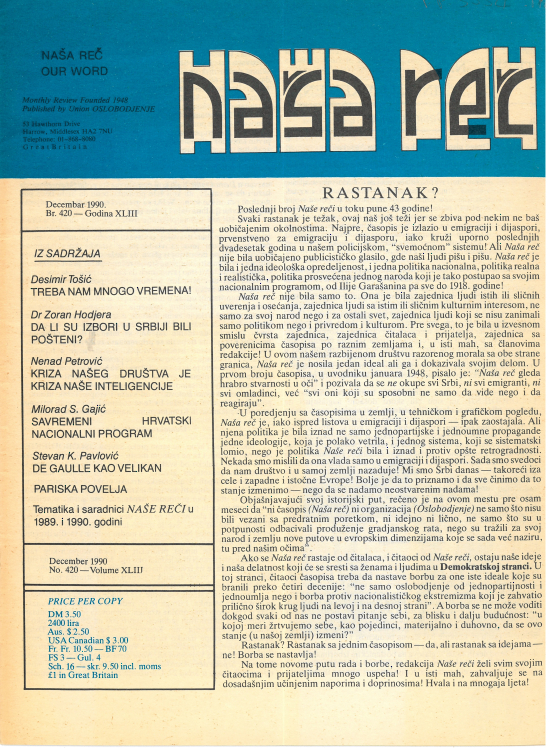 The last issue of Naša reč. (No. 420, December 1990) with a header in Roman type against a stylized Cyrillic backdrop

Naša reč is an indispensable source for studying the questions of liberal and totalitarian ideologies during the Cold War, the problems of interwar and post-war politics in Yugoslavia, and the topic of nationalism in general. In 43 years, Naša reč had over 300 hundred contributors and published a total of over 6,000 pages. The British Library holds an almost complete set of Naša reč in 420 issues; the missing issues are 1-3 (1948) and 137 (1963).

Posted by Olga Kerziouk at 3:34 PM