In most cases, literary works which have marked a turning point, a watershed moment in the history of literature, are new and original creations. However, in some cases, a similar literary outburst has come from a translation rather than the original text. It will suffice to recall the Latin version of the Bible by St. Jerome at the end of the 4th century, the so-called Vulgate and the enormous historical and cultural impact it had on Western Europe at the time.

A less known case, but no less historically important in its impact on the formation of the European Renaissance culture, is the vulgarization of the Naturalis Historia by Pliny the Elder published in 1476 by the Florentine humanist Cristoforo Landino, on which new light has been shed from the recent study of the Italian philologist Antonino Antonazzo in his Il volgarizzamento pliniano di Cristoforo Landino. (Messina, 2018; YF.2019.b.21). In a period which witnessed the rediscovery of classical literature, through the revival of Greek and Latin authors fallen into oblivion during the Middle Ages, the translation of Pliny’s text truly marked an epochal event: Landino’s great historical merit was to make a grandiose 37-volume encyclopedia of Greek-Roman antiquity accessible in the vernacular for the first time: the editio princeps of the translation is a monumental 830-page folio volume. 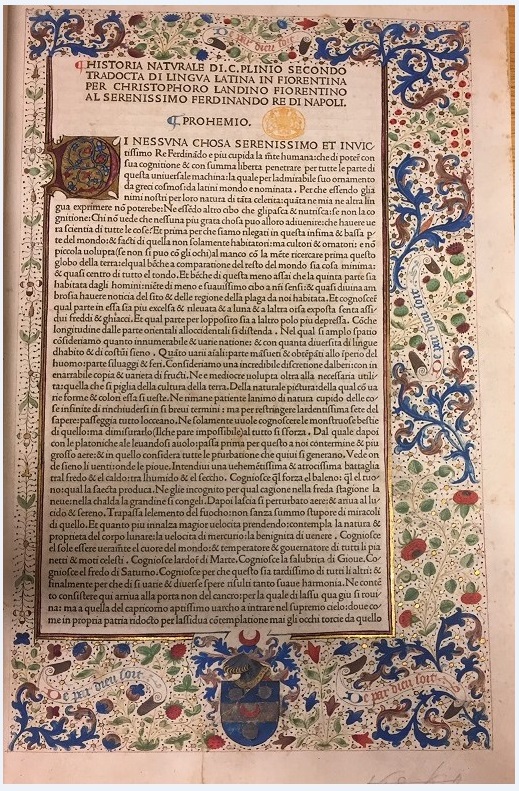 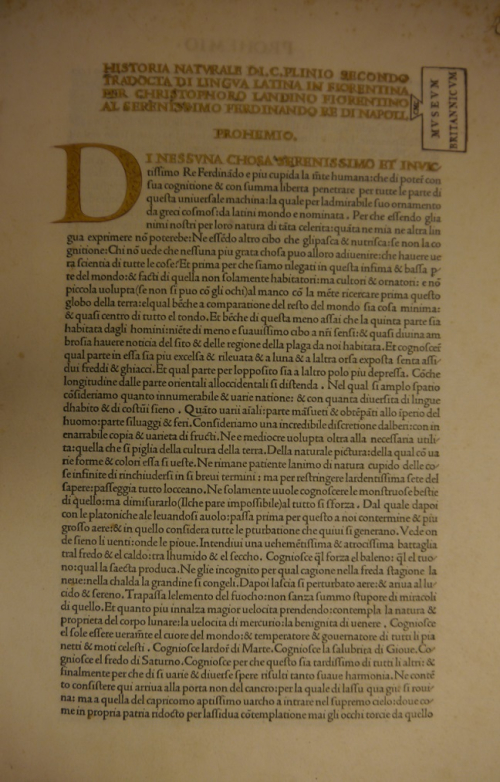 Landino’s laborious work filled an important cultural void that could no longer wait. Many readers from different backgrounds benefited from it: poets, such as Luigi Pulci; artists – to name one, Leonardo da Vinci; and even explorers such as Christopher Columbus. The aftermath was so great throughout Europe, that Landino’s translation remained the only vernacular translation of Naturalis historia for almost a century: the first French translation was published in 1562 (Antoine du Pinet), the English was published in 1601 (Philemon Holland ), the Spanish in 1624 (Gerónimo de Huerta) and a complete German translation as late as 1764 (Johann Daniel Denso). 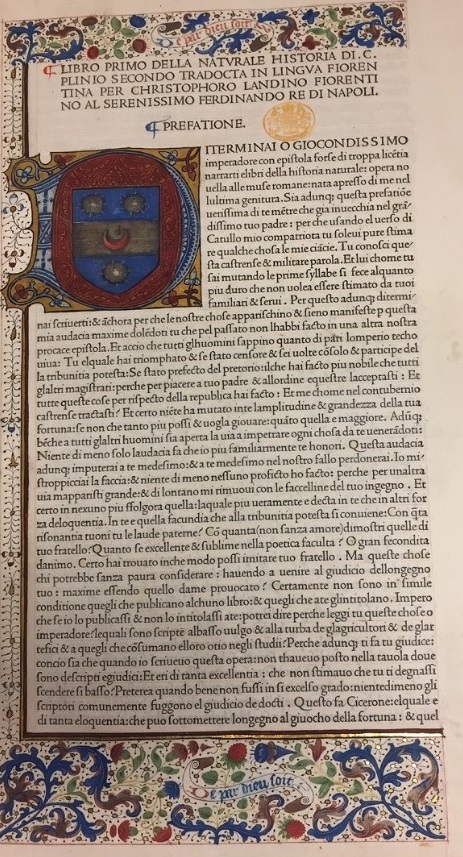 The Florentine vernacularization became a key work because it placed itself at the confluence of many questions until then unanswered: was it acceptable to translate classical literary works into the very vernacular used in everyday life by common people? How to translate a peculiar lexicon of scientific disciplines, such as astronomy, meteorology, zoology, botany, medicine and mineralogy?

And, among the many vernaculars spoken in the regions of Italy, which one was the most suitable? The debate around this last question was in fact now centuries old: it had been a burning one since the origins of Italian literature in the 13th century and had left many conflicting theories; Dante Alighieri in his unfinished De Vulgari Eloquentia (1303-04) reviewed 14 Italian vernaculars in order to identify the most ‘illustrious’ and suitable for poetry, and ended up discarding them all, including the Florentine itself – which is the reason why scholars believe he interrupted the work, the theory conflicting with the practice, as the Divine Comedy would demonstrate. 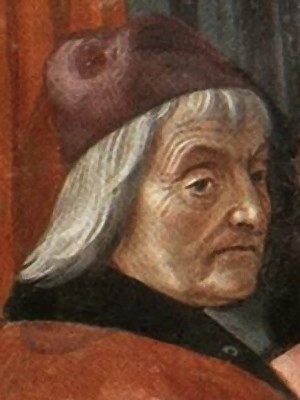 Portrait of Cristoforo Landino from a fresco by Domenico Ghirlandaio in the Tornabuoni Chapel, Santa Maria Novella, Florence, ca 1486-90. (Image from Wikimedia Commons)

Landino’s translation answered all these questions, and even though it did not please some humanists, it was received with enthusiasm by the general public. A significant example of this is its success with a female public, as we read in Giovanni Sabadino degli Arienti’s description of his wife with her books in Gynevera de le clare donne.

The relevance of this testimony is reinforced by the reaction of Francesco Florido Sabino, who, 60 years later, in his Apologia in Marci Actii Plauti aliorumque poetarum et linguae Latinae calumniatores, cursed Landino for allowing not just anybody access to Pliny’s work, but even to women. (See Antonazzo’s study p. 50)

Landino’s intention to reach a wide audicence is expressed in his dedicatory letter to the King of Naples Ferrante d’Aragona, which begins with these words:

Essendo gli animi nostri per loro natura di tanta celerità quanta né mia né altra lingua exprimere non poterebbe, né essendo altro cibo che gli pasca et nutrisca se non la cognitione, chi non vede che nessuna più grata chosa può alloro adivenire che havere vera scientia di tutte le cose?
[Our soul in its nature being as rapid as neither mine nor any other language can express, and there being no other nourishment that satisfies and feeds as cognition does, how can anyone not see that there is nothing that makes it happier than the true knowledge of all things?]