“I only wish my works to be known”. Faddei Bellinsgauzen: The Voyages.

Some of our readers might remember visiting a wonderful exhibition James Cook: The Voyages , which was on show at the British Library last summer. Recently, I have come across a book that will I think would be an interesting continuation of Cook’s story.

Several months before captain James Cook was killed at Kealakekua Bay on 14 February 1779, Fabian Gottlieb Thaddeus von Bellingshausen was born on the opposite side of the globe, on Saaremaa Island (now in Estonia). Ethnically a Baltic German, Bellingshausen was a subject of the Russian Empire, which had owned the island since 1710. At the age of ten the boy was sent to study at the Naval Cadet Corps in Kronstadt and soon started using the Russified version of his name and became Faddei Faddeevich Bellinsgauzen.

His career in the Russian Imperial Navy was progressing as expected, until in 1803 lieutenant Bellinsgauzen was recommended by his commander as an officer and cartographer to participate in the first Russian circumnavigation of the Earth. The expedition headed by Adam Johann von Krusenstern took place from August 1803 to August 1806. Having established himself as a prominent cartographer, 13 years later Bellinsgauzen was appointed a leader of another circumnavigation expedition that discovered the continent of Antarctica. On his return, he became Counter Admiral, and later was promoted to Vice-Admiral after the Russo-Turkish Wars of 1828-1829. 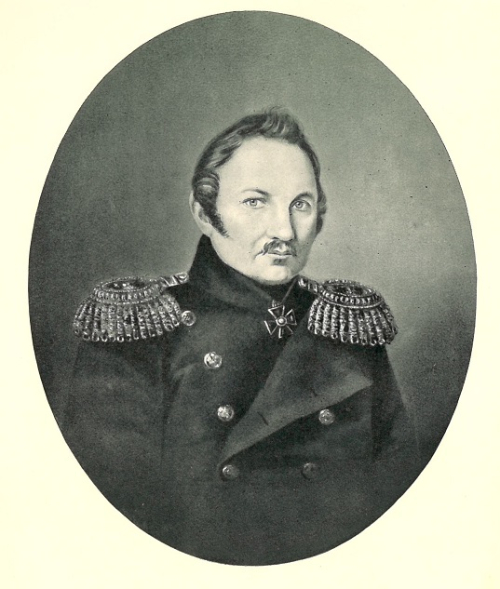 Portrait of Bellinsgauzen from around the time of his expedition to the Antarctic. From The Voyage of Captain Bellingshausen to the Anatarctic Seas (London, 1945) Ac.6172/139

Cook had categorically denied the existence of the mythical fertile great Southern Continent. He thought that there was nothing beyond the ice, which blocked the way for his ships. As a result of Cook’s authoritative opinion, further attempts to find a new continent were put on hold for the next 50 years. In July 1819 the two ships Vostok and Mirny, led by Captain Faddei Bellinsgauzen and Captain Mikhail Lazarev, travelled from Kronstadt to Copenhagen, and then on 29 July arrived in Portsmouth. During their one month’s stay there, the expedition obtained chronometers, sextants, telescopes and other nautical instruments, which at that time had not been manufactured in Russia. The supply of provisions with canned food and some special products was also replenished. Thus, the two explorers were preparing for their circumnavigation expedition and heading to the Southern hemisphere. Bellinsgauzen and his second-in-command Lazarev became the first explorers to see the land of Antarctica on 27 January 1820. They circumnavigated the continent twice, disproving James Cook's assertion that it was impossible to find land in the southern ice-fields. 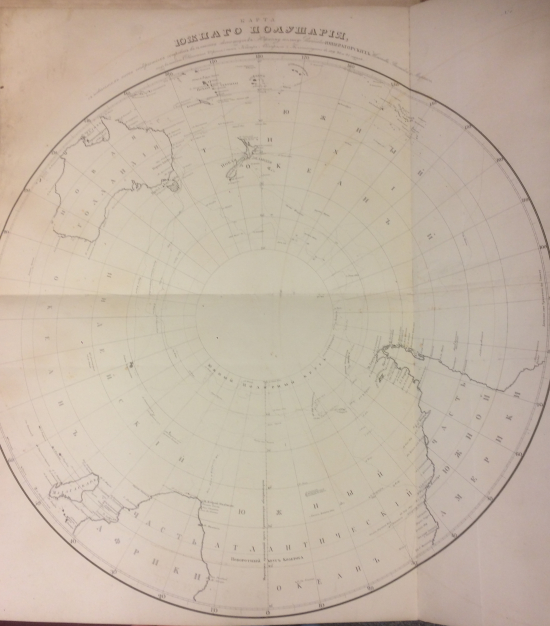 The map of Southern hemisphere showing the islands discovered by Captain Bellingshausen, from the Atlas. 14000.h.9

The expedition collected many ethnographic, zoological and botanical specimens that later found their way into major museum collections in Russia. Pavel Nikolaevich Mikhailov (1786-1840), an artist and draughtsman, travelled on board one of the ships, documenting the voyages. In his scrap albums, he recorded the newly discovered islands, views of cities and settlements, portraits of aboriginal peoples, and carefully depicted samples of exotic flora and fauna. Mikhailov's watercolours and drawings are seem quite reliable. He faithfully followed the instructions received from both the Maritime Office and the Academy of Arts, demanding that “everything that was represented on paper ... was the true image of an object.” 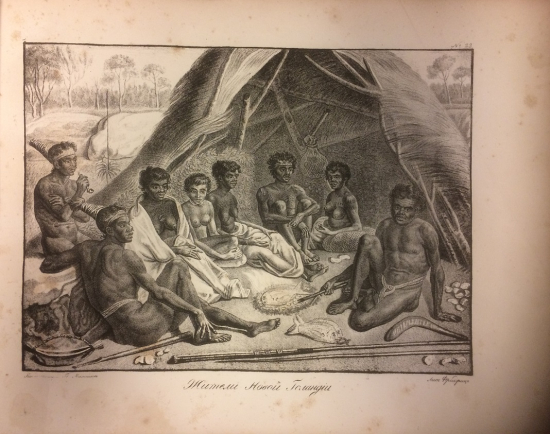 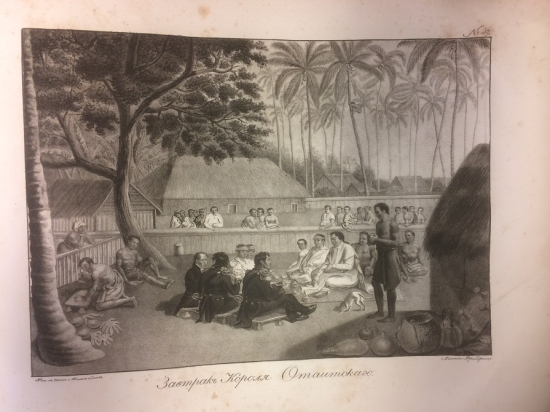 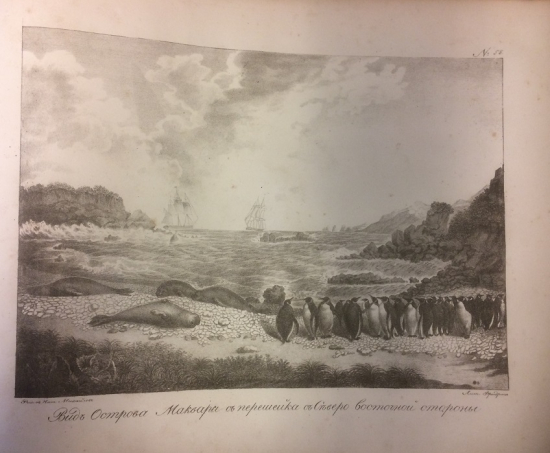 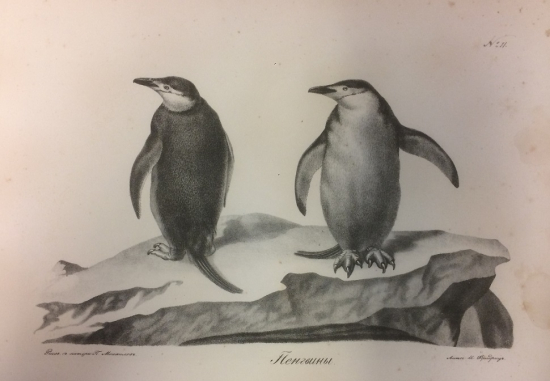 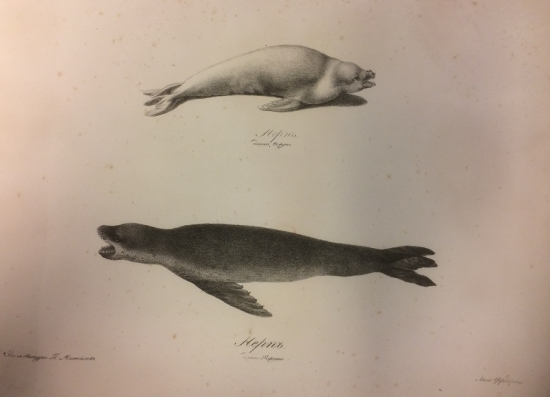 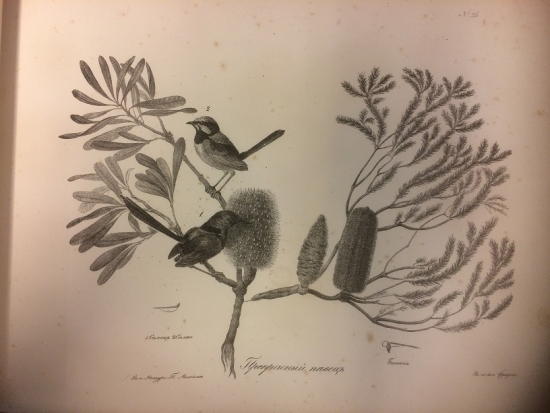 On his return from the trip, Bellinsgauzen tried to publish a book about the expedition and its findings, supplemented by plentiful images and drawings. The publication was meant to be dedicated to the Emperor Alexander I and published ‘by the highest order’. Bellingsgauzen took a considerable effort to achieve this publication as soon as possible, but it was carried out only ten years after the return of the expedition, when he received the rank of vice-admiral. It took him three years to complete the two-volume Dvukratnye izyskaniia v IUzhnom Ledovitom okeane i plavanie vorkug sveta, v prodolzhenii 1819, 20 i 21 godov (‘Double Studies of the Southern Ocean and circumnavigation, in 1819, 20 and 21’). The manuscript was delivered to the Admiralty Department in 1824. Bellinsgauzen asked for 1,200 copies to be printed, but no decision was made about it. In 1827, he resumed his request, proposing to reduce costs by printing only 600 copies. By the way of explaining his desire to get his work published, Bellinsgauzen wrote that he did not see any benefit in this publication, “but only wished [his] works to be known”. The Science Committee at the Naval Headquarters allocated 38,052 Rubles for the publication of 600 copies of the book, making it a collector’s item from the very beginning. The British Library acquired two copies of this rare and wonderful publication (shelfmarks 1047.m.1. and 10496.w.3.).

Posted by Olga Kerziouk at 9:55 AM