Fairytales on trial: the Good and the Beautiful in early Soviet children’s literature

“Education means evoking a revolutionary spirit” wrote Maxim Gorky in 1933 – an uncompromising statement uttered in an uncompromising environment. The 1920s in the newly-born Soviet Union, however, were still quite different. There still seemed to be room for discussion, to explain and convince people. Only two years after the October Revolution, Gorky had expressed his opinion on children’s education more elaborately in a well-known programmatic statement ‘Slovo k vzroslym’ (‘A word to grown-ups’) in the first issue of the first Soviet journal for children, Severnoe Siianie (The Northern Lights), founded by Gorky himself. There he advanced the importance of exploiting children’s stories to shape the new Socialist Man, by instilling “an active spirit, an interest in and respect for the power of reason, the discoveries of science, and the great mission of art, which is to make man strong and beautiful”. 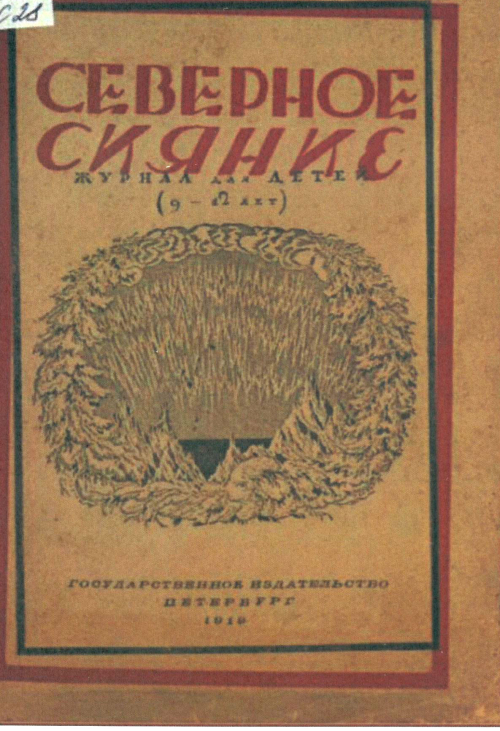 Sadly, the artistic quality of the journal was far from being able to fulfil such an ambition. Grey social realism always prevailed. It was mostly concerned with instructing children of the proletariat in basic practical scientific and technical knowledge, or about the harsh living conditions in Russia before that glorious October of 1917. In a regular section called ‘Klub liuboznatel’nykh’ (‘Club of the Curious’) one can, ironically, find some of the most uninspiring titles. In the October-December 1919 issue, for instance, ‘Club of the Curious’ opens with a brief piece of ‘fiction’, entitled ‘Polchasa v sutke’ (‘Half an hour a day’), aimed at raising awareness of the importance of chewing one’s food thoroughly for at least the stated period to aid healthy digestion for a healthy and strong body. This provided what the Narkompros sought in terms of acceptable educational methods: useful, practical knowledge that contributes to raising stronger citizens. 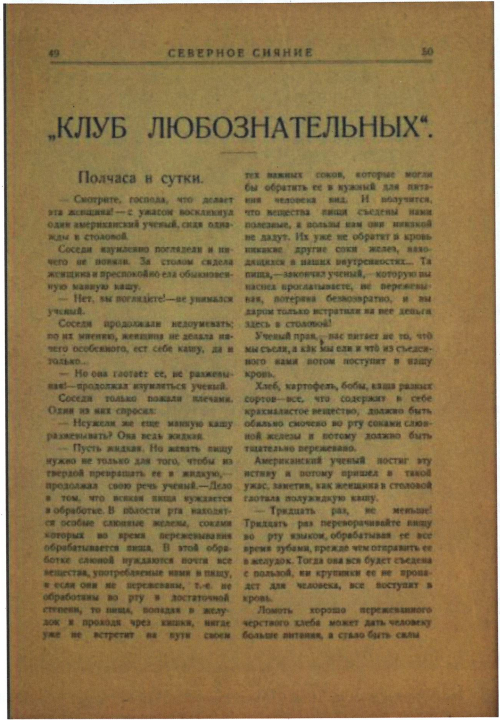 The fact that a culturally influential figure like Gorky was behind such publications as Severnoe Siianie does not mean that the early Soviet era was devoid of fine literary works addressed to the smaller ones. On the contrary, it was an extraordinarily rich age for children’s literature in terms of experimentation. While the endeavours of Gorky and his circle contributed to a surge in literacy in the first decades after the Revolution, the efforts of talented authors such as Korney Chukovsky and Samuil Marshak resulted in the creation of a distinct artistic and literary current, a true Golden Age of Russian children’s literature. 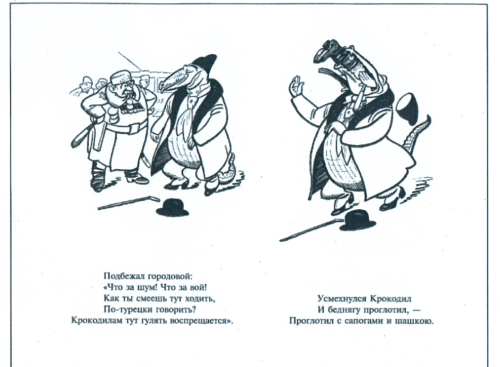 A passage from Korney Chukovsky’s Krokodil illustrated by Re-Mi (Nikolai Remizov). ([Petrograd, 1916-1919?]) 12833.dd.27. Krokodil Krokodilovich swallows up a policeman who tried to get in his way.

Chukovsky’s famous Krokodil (Crocodile) is one of the most exhilarating pieces of literature ever written for children. In this old, very old fairytale (as the subtitle ironically goes) traditional fairytale anthropomorphism is reenacted in a typical Futurist setting. Krokodil was one of the most discussed pieces of children’s literature in the 1920s and 1930s. In a 1928 article in the newspaper Pravda, Lenin’s widow, Nadezhda Krupskaia, discouraged parents from reading the story to children, “not because it is a fairytale, but because it is a bourgeois nonsense [‘burzhuaznaia mut’]”. Obviously, it was not Chukovsky’s artistic audacity and mind-blowing stylistic virtuosity that were under attack. Quite simply, there was no acceptable educational content in the poem: a cigar-smoking, Turkish-speaking crocodile called by his first name and patronymic was certainly funny, but had nothing to teach about crocodiles as a species. 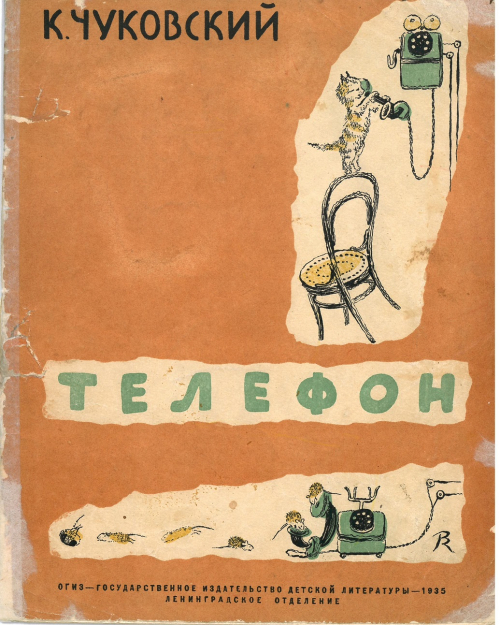 Korney Chukovsky, Telefon, illustrated by Vladimir Konaschevich. (Leningrad, 1935) Cup.410.e.89.
It was first published in 1926 with drawings by Konstantin Rudakov.

Chukovsky’s Telefon (‘Telephone’) takes anthropomorphism to the extreme: the narrator’s telephone keeps ringing and an elephant, crocodile, gazelle and hippo each call to tell him about their needs and problems. Although this tale can be said to “teach children the art of communication” or telephone etiquette, as а scholar pointed out, its central features are the overwhelmingly nonsensical, whimsical plot and absurd humour. 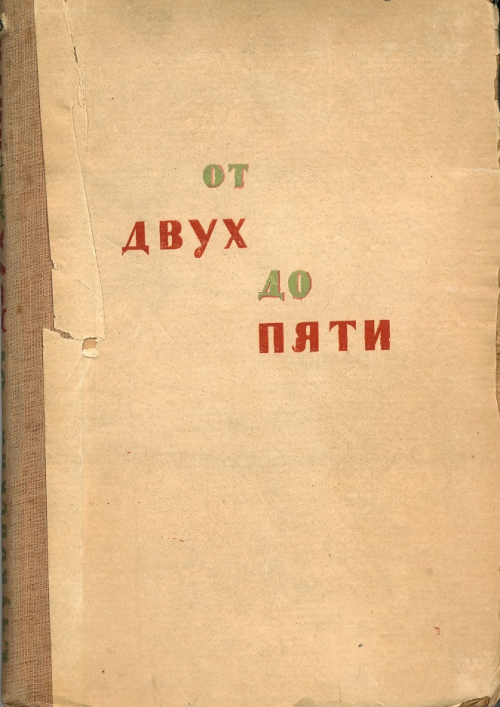 An ideologically more suitable work by Chukovsky, and one fully appreciated by Krupskaia, is the collection of articles, observations and reflections on pre-school age children’s communication, Malen’kie deti (‘Young children’). Every passage in this book oozes Chukovsky’s sincere marvel at and interest in children’s psychology and his effort to unveil the complexity behind a child’s apparent simple-mindedness to adults (to whom the book is addressed). 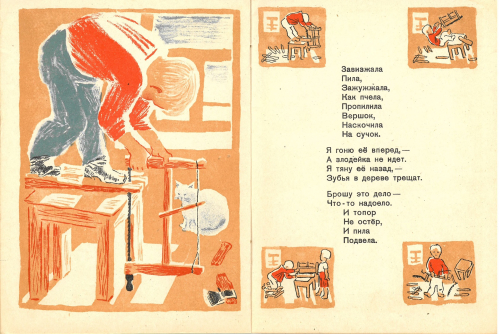 The British Library also holds many early editions of Samuil Marshak’s works. Master-Lomaster is a poem satirizing the disastrous consequences of self-confidence and self-reliance in an individual’s work attitude, instructing children to grow up collective-minded instead. The title, an untranslatable pun, often rendered as ‘Master of disaster’, is also an example of Marshak’s skillful wordplay. Above: Cover of Samuil Marshak, Pozhar 3rd edition (Leningrad, 1925) Cup.408.r.18. Below: Kuzma and the fire brigade fighting their way through the flames 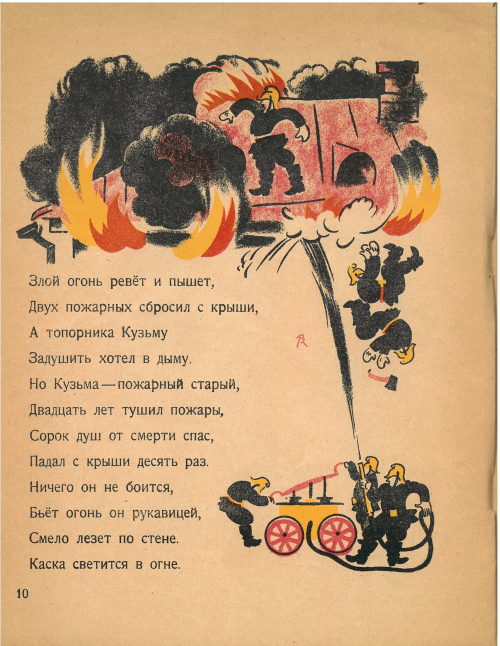 In Pozhar (‘Fire’) the main theme is again one’s attitude to work, but this time Marshak provides a positive example in the heroic fireman Kuzma and the team spirit of the fire brigade. Kuzma, like the Soviet version of an Old Russian bogatyr is outstanding for his courage and collective-mindedness, which lead him to save little Lena, allured and trapped by the evil fire. 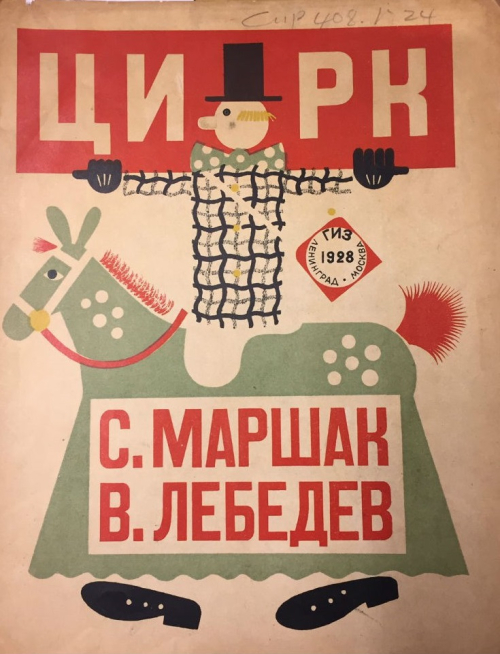 Marshak’s collaboration with the talented graphic artist Vladimir Lebedev fuelled what was to become the trademark of children’s poetry in the early Soviet Union: a balance between drawing and text, so that the former was not a mere illustration of the latter. Their works often resemble the Soviet propaganda posters that people were familiar with, making each individual page a potential artistic object in itself. 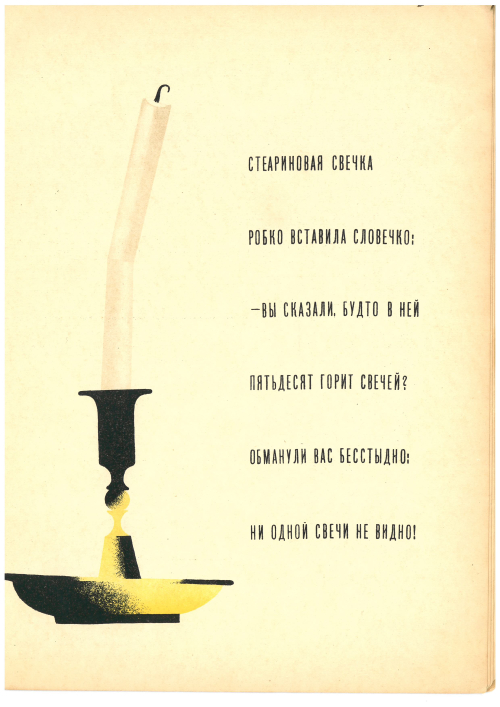 In Vchera i Segodnia (‘Yesterday and Today’) Marshak and Lebedev introduce children to new technologies. A kerosene lamp, candle, bucket and quill pen lie unused in their old home, faced with intruders from the new world: a cheap electric lightbulb, water pipes, and a typewriter. This short fairytale enables the reader to see how the new inventions have made the old ones redundant, while also sympathizing with the old objects’ baffled and nostalgic sense of loss. 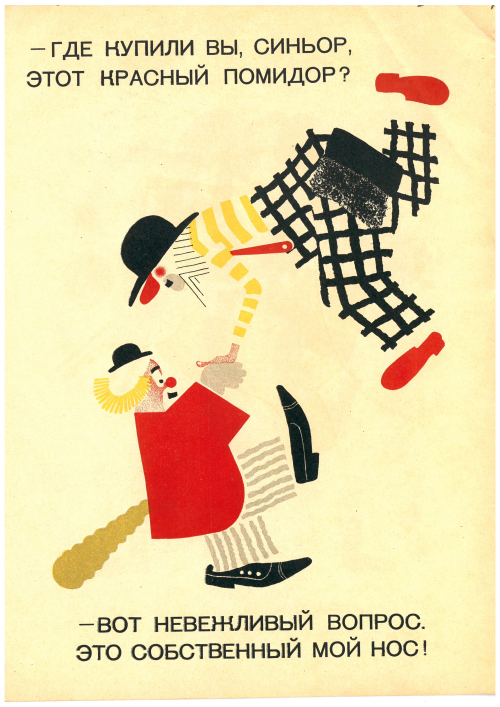 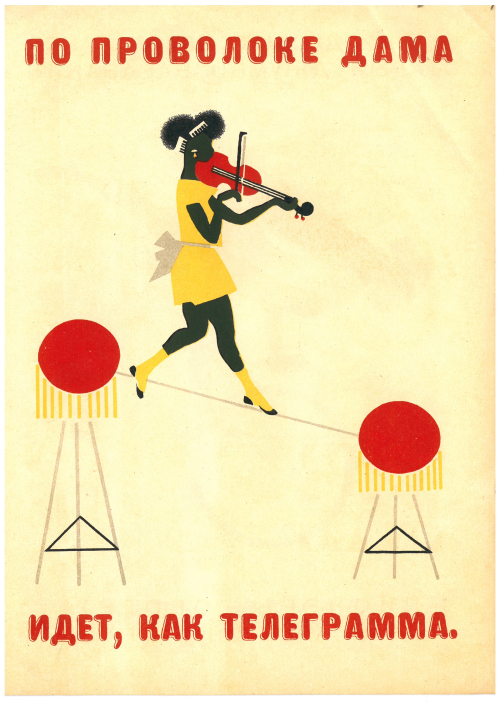 With Tsirk (‘Circus’), Marshak and Lebedev produced one of the most outstanding picture books, appealing not only to children. The poster-like layout of each page, the short and memorable text and the clever rhymes make it one of the most representative and original of their works. Futurist poet Vladimir Mayakovsky was reportedly impressed by the line “po provoloke dama | idet, kak telegramma” (“along the wire the lady | goes like a telegram”). 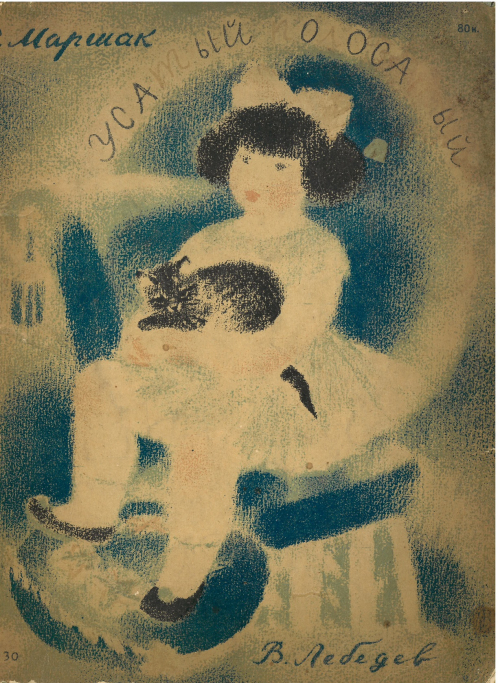 Usatyi-Polosatyi (‘The Whiskered-Tabby’), is the clear product of a long-standing oral composition process. It is a simple, humorous story about a tabby kitten and its child owner who repeatedly tries (and fails) to make it behave like a human – hence the repeated line “Vot kakoi glupyi kotenok!” (“What a stupid kitten!”). The story ends with the child growing up and the cat “becoming” clever – a subtle move which children would likely only understand and laugh at when looking back at it as adults. This edition contains drawings by a different Lebedev. 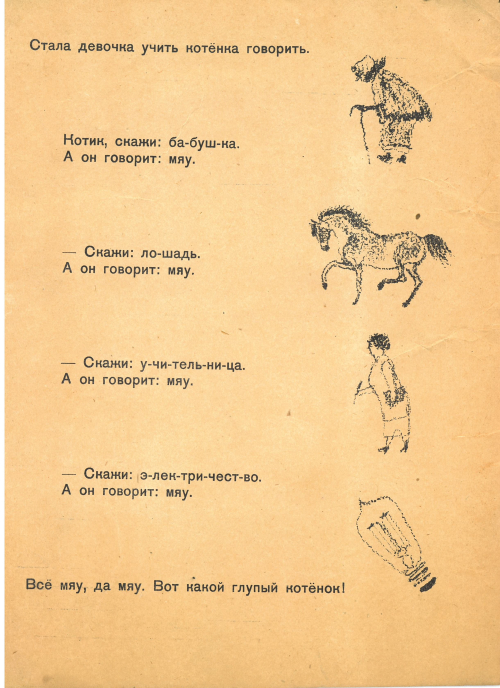 Images from Usaty-Polosaty. Above: The child wants the kitten to say ‘grandma’, ‘horse’, ‘teacher’, ‘electricity’, but the kitten only replies ‘meow’. Below: The kitten has “become a clever cat” 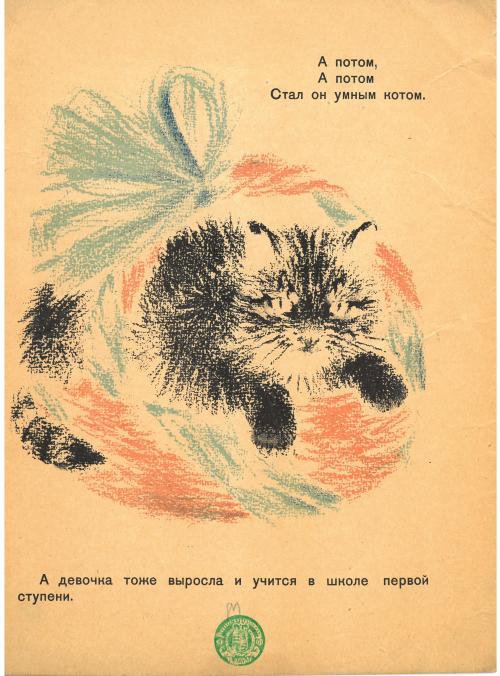 These publications represent only a small portion of Marshak’s great contribution to Soviet children’s literature in the 1920s and 30s. But, like Chukovsky’s works, they were far from immune to ideological criticism. Master-Lomaster, for instance, lacked propaganda value. In Pozhar, Lena’s fear of death was a private not a collective concern. While Chukovsky’s creative force was soon to be crushed by constant ideological attacks, Marshak turned to editing work and became the chief editor of the children’s journals Ëzh (1928-) and Chizh (1930-). These were for many years virtually the only magnet for talented writers, first and foremost Daniil Kharms and the Oberiuty, who would not have been able to publish freely elsewhere, due to the stricter censorship imposed on adults’ literature. 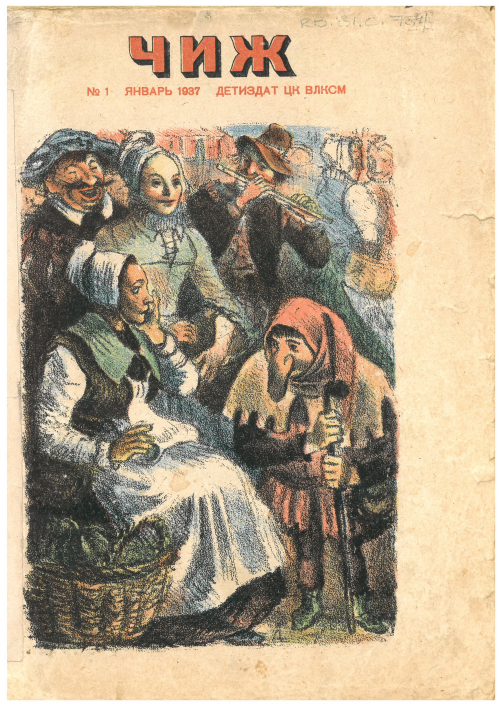 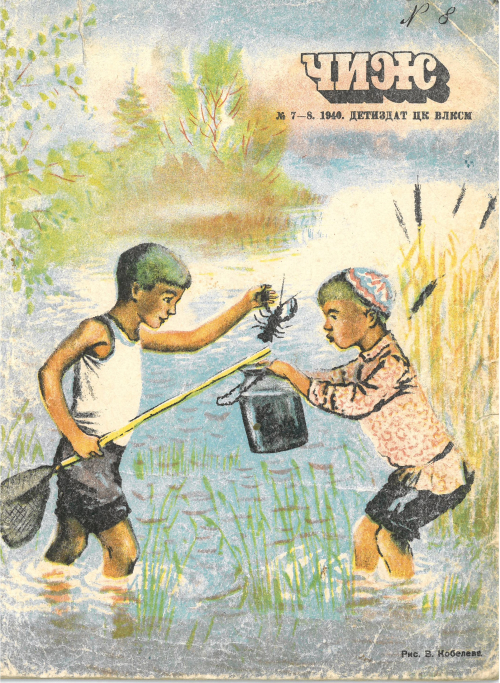 First and last issues Chizh (1937, No. 1 - 1940, No. 7-8). RB.31.c.774. The title, meaning ‘siskin’, is also the acronym of Chrezvychaino Interesnyi Zhurnal (‘Extremely Interesting Journal’), indicating the humour at the very core of these publications and of most high-quality children’s literature of the period.

The British Library’s holdings of Chizh span from 1937’s first issue to 1940. These are representative of a new stage in Soviet children’s literature, one where a previously very fortunate symbiosis between the Good and the Beautiful faded into a series of more and more exclusively politically committed works.