In Six Memos for the Next Millennium Italo Calvino explains the opposition between lightness and weight in literature, calling the first “a value rather than a defect”, as it is by mastering lightness that writers make their readers feel its counterpart. Calvino guides us through a literary journey from Ovid’s Metamorphoses to Kundera’s The Unbearable Lightness of Being to show that lightness is no less important than weight in order to strengthen the literary substance.

I thought it would be appropriate to apply the same formula in writing about Luigi Pirandello, a giant who left the deepest footprints in the soil of 20th century Italian literature, that is, by starting with the mention of his nose. He was only 19 when, in a brief letter to his parents dated 16 February 1886, he wrote:

…I went to San Lorenzo, and I enjoyed myself very much, but for the last 3 days I have been crying the consequences, well, my nose has been crying, my poor nose, or, better, my promontory…
… Do not worry about my health, it has fully recovered: do mourn my nose though – I beg you – my poor nose! According to the last examination, it measures 3 inches in height and 5 in length…

The letter included a drawing Pirandello made of his nose to evidence the measurements. 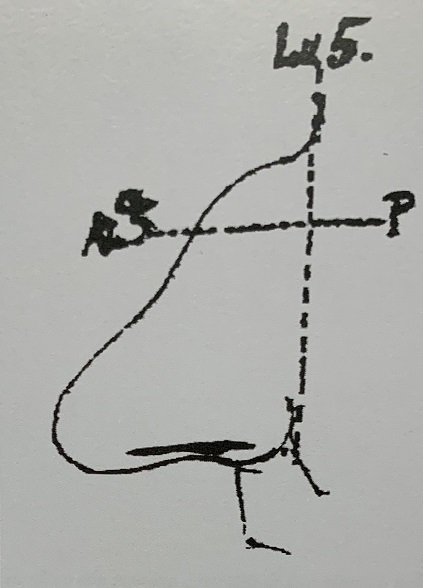 Later the same year, in a letter dated 30 April, following the death of his close friend Carmelo’s brother, Pirandello included another drawing, this time of himself blowing out a candle, as if capturing the moment before going to bed. Even though the nose is again the amusing focus, his self-portrait emanates a sense of sadness and loneliness:

… Then, not sure by which thought, I felt the urge to write to Carmelo, but the letter written at that emotional moment is still on my table…
…I am already staying at aunt Sara’s, but not yet settled, as all my stuff is in the old place. Without books, without paper, without my bed, I feel half man and rather dull... 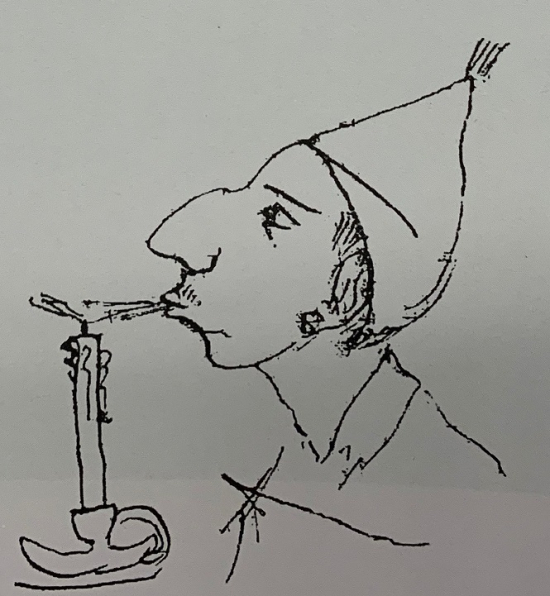 First published in 1907 in the literary journal Il Marzocco, then in 1925, giving the title to volume 8 of Prandello’s Novelle per un anno, the novella Dal naso al cielo (‘From the Nose to the Sky’), ends with a close up of Romualdo Reda’s nose – on its tip a very thin spider thread coming from the horse chestnuts’ branches under which the corpse was found. Earlier in the story, Reda’s sense of superiority, being a scientist, prevented him from entering into a debate over Professor Dionisio Vernoni’s belief in the occult and spiritualism as a way to explain some odd incidents in the old hotel where they were staying. Vernoni, irritated by such snobbery, “broke into a deep outburst against positive science, against certain so-called scientists who do not see a span beyond their noses (he repeated four or five times this phrase”. 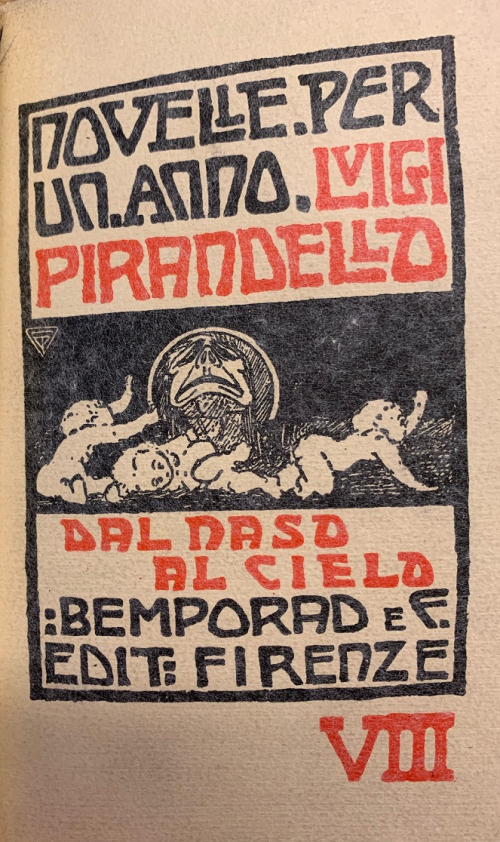 The oscillating perspective of amusement and anguish, laughter and fear, which characterizes Pirandello’s work, is finely explained in his essay On Humor, published in 1908:

In 1909, soon after publishing On Humor, Pirandello began working on Uno, nessuno e centomila (‘One, No One and One Hundred Thousand’), but it was not until 1925 that it first appeared in the journal Sapientia, and it was finally published as a book in 1926. The first chapter opens with the main character, Vitangelo, looking at his nose in the mirror:

I was twenty-eight years old; and up to now, I had always looked upon my nose as being, if not altogether handsome, at least a very respectable sort of nose…

Vitangelo examines his nose after his wife observes that its “right side is a little lower than the other”. He is shocked to realize that he had never noticed. After he asks for confirmation from a friend, who also sees that Vitangelo’s nose hangs lower on the right, but who in turn, does not see in his own face what Vitangelo sees, the story unfolds “In the pursuit of the stranger”:

Was it really my own, that image glimpsed in a flash? Am I really like that, from the outside, when – all the while living – I don’t think of myself?
… I am the stranger whom I am unable to see living except like that, in a thoughtless second. A stranger whom others alone can see and know, not I. 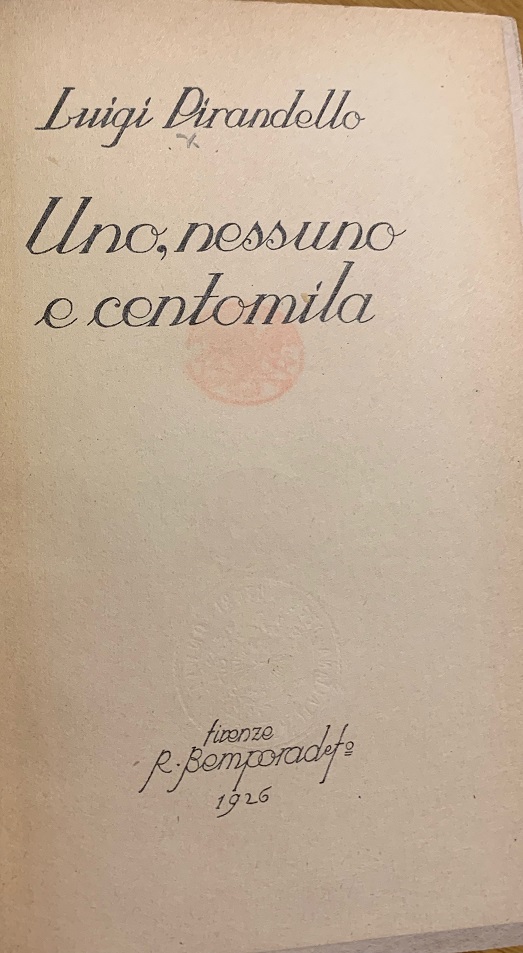 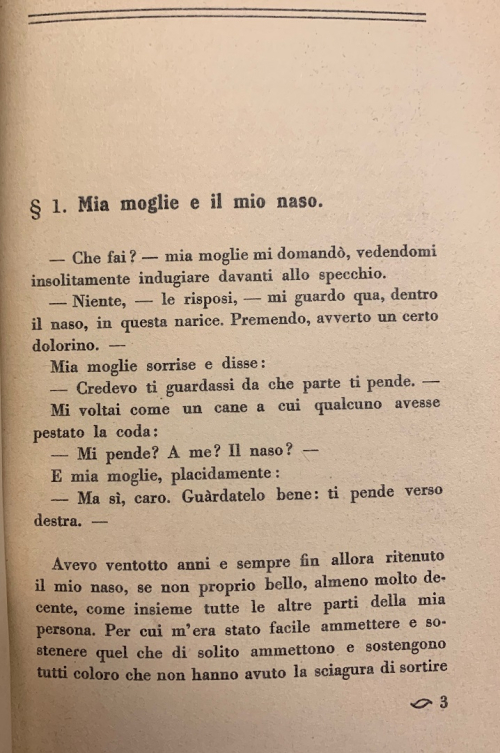 … You will never know yourself as the others see you. What’s the point then of knowing yourself just for yourself? You might end up not comprehending any longer why you should have the image that your mirror reflects back to you.

This non-conclusion reminds of a concept on which, few decades later, some postmodern thinkers based their view of society –Jean Baudrillard for example:

So the secret of philosophy may not be to know oneself, or to know where one is going, but rather to go where the other is going… because in any case you will never know who you are. Today, when people have lost their shadow, it is utmost important to be followed by someone…

Pirandello’s pursuit of the stranger in oneself takes a different connotation in Baudrillard and ends up turning into a reverse obsession: I am followed, therefore I must exist. There is only so much lightness Pirandello can be approached with: Uno, nessuno e centomila has left an important memo for the philosophers of this millennium:

Life is in continuous movement and can never see itself… When one is alive, one is alive and does not see oneself. To know oneself is to die.

Posted by Olga Kerziouk at 2:41 PM