In the footsteps of Princess Izabela Czartoryska

In the second half of the 18th century, Britain attracted a great deal of interest as a destination for the European aristocracy and nobility. This was a result of the country’s Industrial Revolution and rising political power in the world. Traditionally trips to Europe, called the Grand Tour, were a regular feature of aristocratic education in the 17th and 18th centuries. The typical itinerary included countries such as France, Switzerland, Italy, Greece and the German-speaking parts of the continent, with Britain joining this list in the end.

Princess Izabela Czartoryska (1746-1835) was a member of one of Poland’s most prominent aristocratic families. She was a writer, patron of the arts, and founder of Poland’s first museum, the Czartoryski Museum. Politically and socially active, Izabela also travelled around Europe. Her manuscript diary of her tour through England and Scotland in 1790 surprisingly survived the turbulent periods of wars and relocations of the archives. Translated from French into Polish and English, the diary was recently published in Poland. It is a record of her observations and impressions and gives an insight into urban and rural life in England at the end of the 18th century. 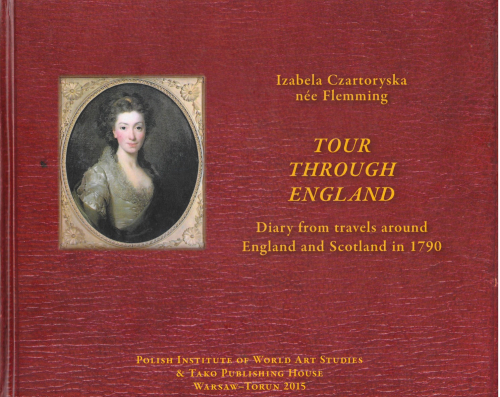 In 1790, Izabela visited England as a chaperone to her twenty-year-old son Adam Jerzy Czartoryski (1770-1861). The first port of call was London. While Adam was busy with his six-month studies, his mother occupied herself with excursions around London and visits to the city’s attractions. Although impressed with London’s diversity, she wrote to her friend: “I will never be able to accustom myself to the climate and the people. One is humid to the extreme and the other is unspeakably cold; one is bad for my health, the other is damaging my soul”.

However, in the summer of that year they both embarked on a tour of England and Scotland. This was a very fruitful expedition – they travelled through the whole country, covering 3000 kilometres. The visits included cities and industrial estates as well as nature sites and agricultural wastelands. The route followed the well-beaten track recommended in numerous guides to the country. In nearly three months of travelling, the party spent most of their time visiting gardens and residences. Izabela mainly focused on country houses with rich collections of works of art. Places visited included Stowe, Blenheim, Stourhead, Castle Howard, Studley Royal and many more. However, landscape gardens and parks were her particular interest, as she was a skilled gardener herself. She admired some of them for their beauty and calming and consoling effect, while those neglected provoked her criticism. In Scotland, Czartoryska considered Dunkeld the most beautiful site she had ever seen, and its description is the most sophisticated of all in her diary. 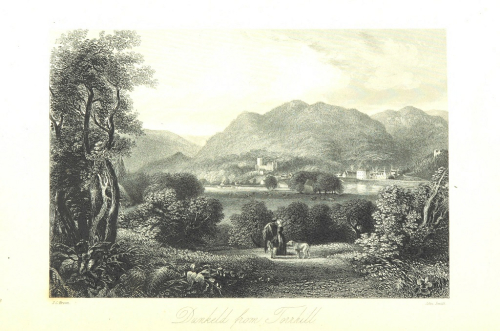 View of Dunkeld, from A Series of Select Views in Perthshire with historical and descriptive illustration … (London, 1844) 010370.dd.26

Upon her return to her palace in Pulawy, Izabela redesigned the garden in the English style with the help of James Savage, a gardener from London. He was only employed for three years; however, he stayed in Poland for the rest of his life. As a lover of Shakespeare’s poetry, Izabela was delighted to see what she was told was his chair in Stratford-upon-Avon and became obsessed with it. Using all her energy and charm, she managed to secure its purchase.

Czartoryska had great admiration for industrial landscapes, finding them to be complementary to the natural beauty of the countryside. As much as she enthused about industrialisation, she nevertheless noticed, on a tour of the factories, the exploitation of both women and men. She also noted the changes in agriculture resulting in mass misery for ordinary people.

Posted by Olga Kerziouk at 3:30 PM