The Russian in Britain: the Most Essential Book for Every Traveller and Tourist

In September 2018, an exhibition Language Learning through the Ages was on display at the Taylor Institution Library in Oxford. In the section on Conversation books, one could observe J.H.Wisdom’s The Briton in Russia, published by Leopold B. Hill in 1915. In the words of the exhibition curators, this was “a guide not just to the language but also to Russia”. Also, “the other big step forward is that an attempt is made to help the traveller with pronunciation. The International Phonetic Alphabet had been in existence since 1888 and increasing knowledge of phonetics influenced phrasebooks in that they started to contain phonetic information but would have been too complex to use in a phrasebook”. 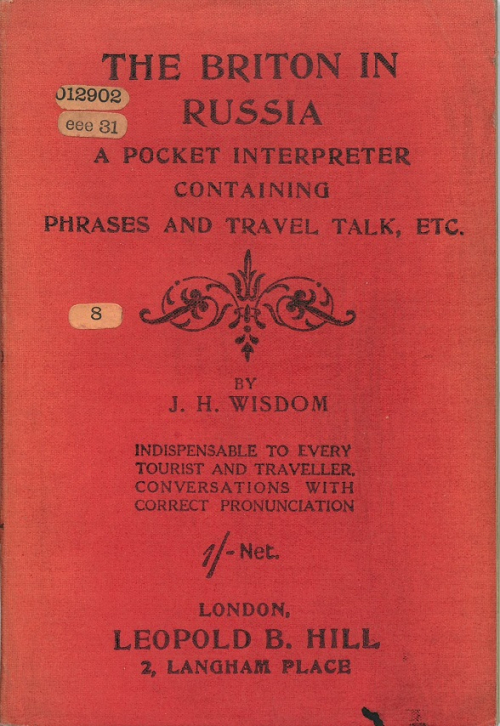 Alongside other genres and titles, the publisher was clearly specialising in travel guides and ‘pocket interpreters’, such as The Briton in Spain, The Briton in France, and The Briton in Flanders within The Briton Abroad series. Interestingly, in her book of travel memoirs Honeymooning in Russia (London, 1911; 10291.bbb.10.), Ruth Kedzie Wood complained that having arrived in London from America, they had to buy “Baedeker’s Russian in French”, as “none being published in English”.

The gap in guidebooks in English started to get filled in the next couple of years and, ironically, production was in full swing during the time when Europe was being torn apart by the bloodiest war ever experienced. However, not only Britons travelled the world. The British publisher also was interested in profiting from guests to the islands. But while the book in German Der Deutsche in England: Taschenbuch für nach Grossbritannien Reisende was published in 1912, The Russian in Britain = Russkii v Anglii (yes, one may say that the Russians didn’t care about Britain and were preparing to visit England only, and therefore the titles in English and Russian were different!), came out in 1917, when the Russians were probably the least inclined travelling for leisure and sightseeing. 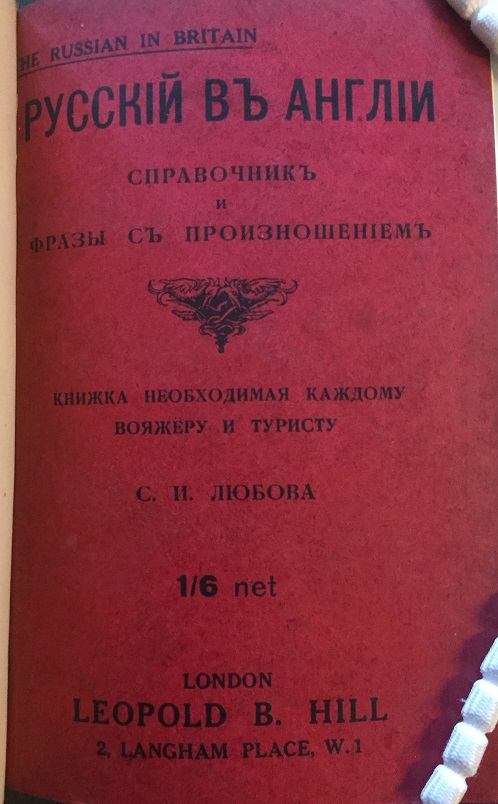 However, the phrase book caters for much more than a short city break with simple ordering from an a-la carte menu and enquiring about vacant rooms. The book suggests that a traveller might need to visit a barber or do extensive shopping. 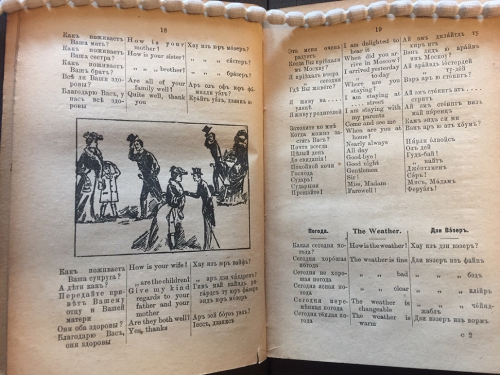 Polite greetings, small talk, and that ever-useful British topic of the weather from The Russian in Britain. 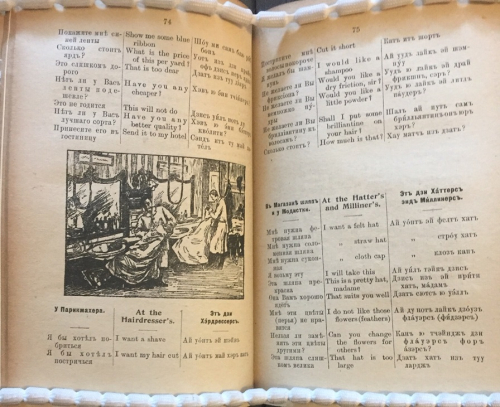 ‘At the Hairdresser’s’ from The Russian in Britain.

Apart from phrases, the book contains practical advice, such as the most convenient itineraries, the gist of the British Aliens’ Act of 1905, information on customs regulations, recommendation of hotels and restaurants, lists of places for sightseeing and entertainment, a section on the British currency and the measurement system. 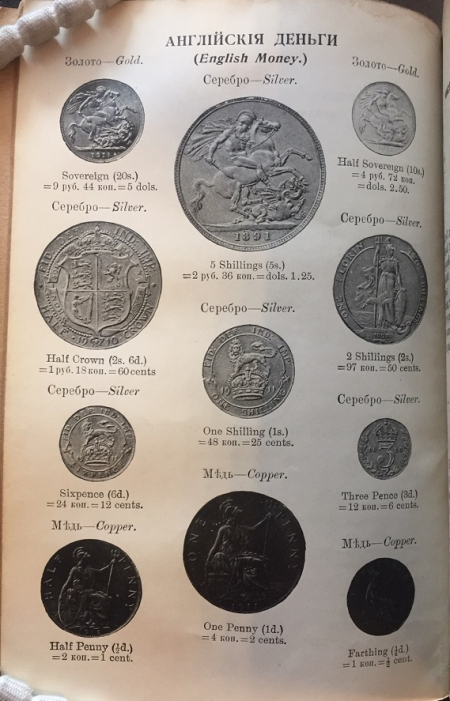 Guide to British coins from The Russian in Britain.

In a time when a transatlantic flight seems like a very long journey, it is quite refreshing to imagine, what it meant to organise a journey from Moscow to London via Warsaw, Berlin, Rotterdam (route 1) or Petrograd, Helsingfors (Helsinki), Stockholm, Christiania (Oslo), Bergen, and Newcastle (route 2). It is not clear whether the 1st and 2nd class passengers were admitted to Britain without any restrictions, but passengers of the 3rd class were supposed to demonstrate that they had enough means to sustain themselves in the country, and to have on them no less than £5 (50 Roubles) and at least £2 per each family member travelling with them. According to the author, travellers would be pleased to see how wonderful the public transport was in London and around. The author claims that trains consist of mostly 1st and 3rd class carriages, but 3rd class carriages are surprisingly clean and comfortable, just as the 2nd class in Russia. 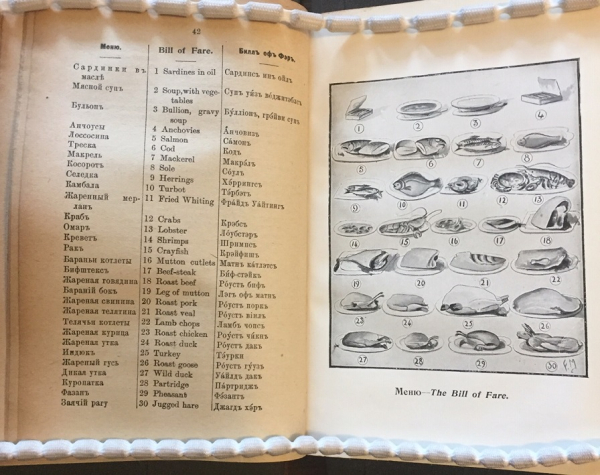 ‘The Bill of Fare’ from The Russian in Britain

From the recommended restaurants, some are very famous and have a long history, such as, for example, the Horseshoe pub in the former Horseshoe Hotel at 264-267 Tottenham Court Road, the building of which was only demolished in 2004. It was also interesting to learn about the ‘precursor’ of NHS – a free French hospital for anyone who could speak French, regardless of nationality, which was situated in Shaftesbury Avenue.

We could find nothing about the author, S.I. Liubov, and may suggest that this could be a pseudonym.

To learn more about a history of tourism, explore our print resources and the digital collection recently released by Adam Mathews and available in the British Library’s reading rooms: http://www.masstourism.amdigital.co.uk/