Some time ago our Translator in Residence, Rahul Bery, wrote a post for the BL English and Drama blog about translations of the works of P.G. Wodehouse. As an unexpected but welcome response to this we were contacted by Wodehouse expert Tony Ring, who asked if we would be interested in a donation of Wodehouse novels in various European languages. We were of course delighted to accept and recently the collection of 100 books, in Danish, Dutch, French, German, Hungarian, Italian, Norwegian, Russian and Swedish, arrived in the Library.

Unpacking them I was fascinated by the range of different cover designs. I always associate Wodehouse with the gently humorous drawings of ‘Ionicus’ (J.C. Armitage) which adorned the British Penguin editions for many years. but readers abroad would encounter Wodehouse under many different covers, some of them quite surprising.

To start with some straightforward ones, in the 1970s and 80s, the Dutch publisher Spectrum issued a number of Wodehouse novels in its ‘Prisma’ series with covers by the well-known political cartoonist Peter van Straaten and there are nine of these in the collection. Straaten’s lively drawings clearly represent characters and situations from the books – not as common as you might think! Here are two, from Summer Lightning (De ontvoerde zeug), translated by W. Wielek-Berg, and Something Fresh (Nieuwe Bezems), translated by W.N. Vandersluys. 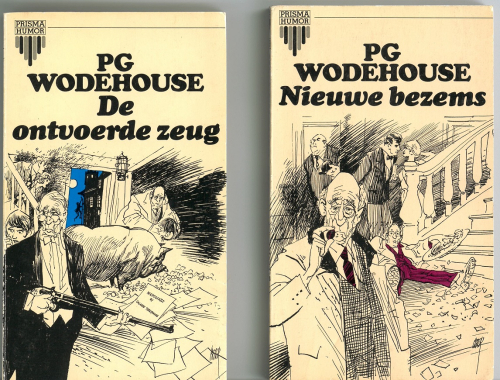 Van Straaten’s illustrations show the characters dressed more or less appropriately for the period when the books were set. However, this is not always the case. This 1962 cover by Georges Mazure for Dokter Sally, translated by Henriëtte van der Kop, reflects the fashions of the day rather than of its original publication date thirty years before. 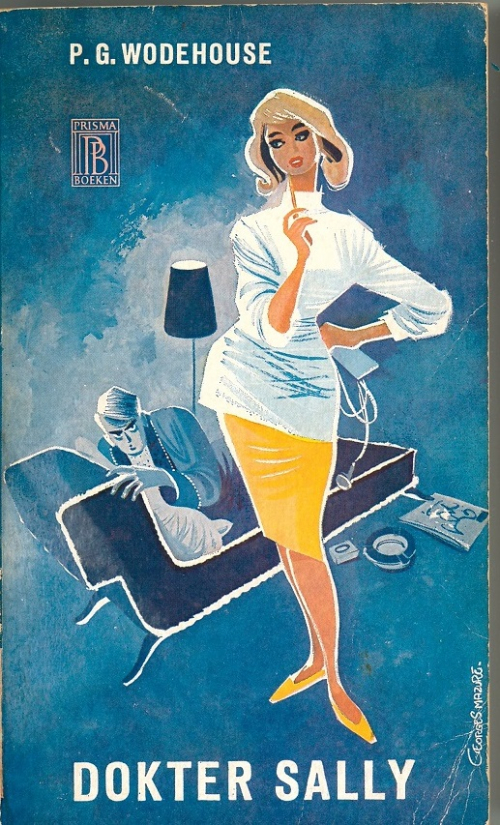 Likewise, Ulrich Lichtenhardt’s cover for this 1980 German edition of Spring Fever (Frühlingsgefühle) bears all the hallmarks of the late 1970s rather than of 1948 when the book first appeared. Incidentally, all seven German translations in the collection bear the rider ‘Heiterer Roman’ (‘light-hearted novel’) on their covers – playing to a stereotype of an earnest German reader needing to be assured that laughter is allowed? 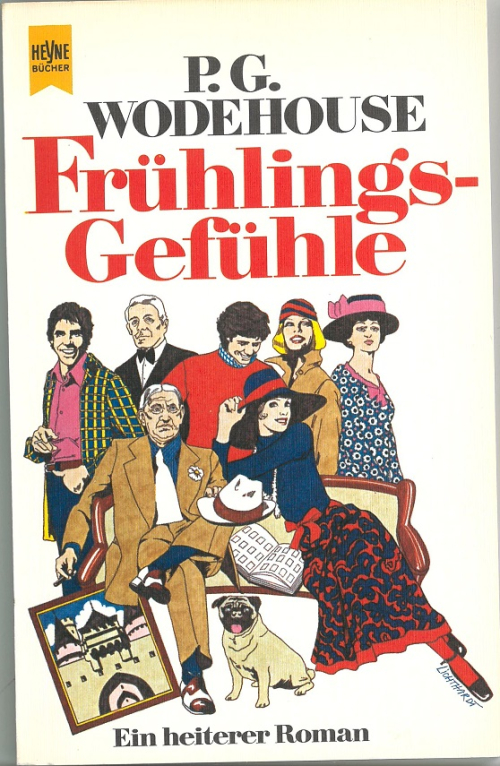 If the Germans want to emphasise humour, some of the Russian covers seem to imply a darker side to the tales. The Angler’s Rest and its regulars have surely never looked as louche as on the vaguely expressionistic cover of this 2011 translation by I. Gurova of Mulliner Nights (Vechera s misterom Mullinerom). This is probably my favourite cover in the whole collection. 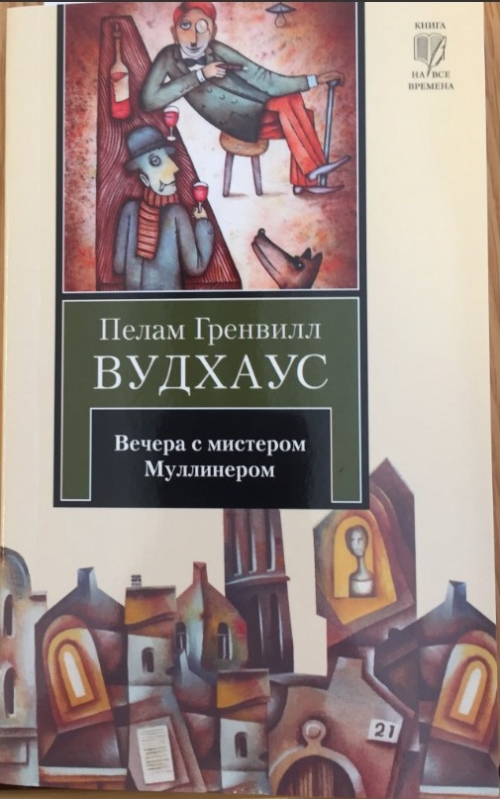 Two other Russian Mr Mulliner collections also use expressionist artwork on the cover, to rather angst-ridden effect, but most worrying is this bleak 2002 cover for A Damsel In Distress (Deva v bede), which to my mind looks better suited to Tess of the d’Urbervilles than to the world of Wodehouse. I can only think that the designer was given nothing to go on but the title. 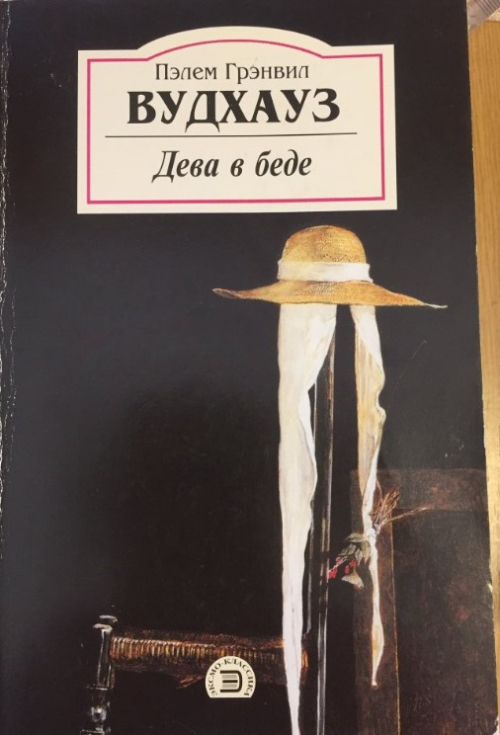 I find there’s also something slightly threatening about this Italian cover by Stefano Tartatrotti for Adriana Motti’s translation of Uncle Dynamite (Zio Dinamite) from 1998, but as with the Russian Mulliner Nights, the humour wins out. 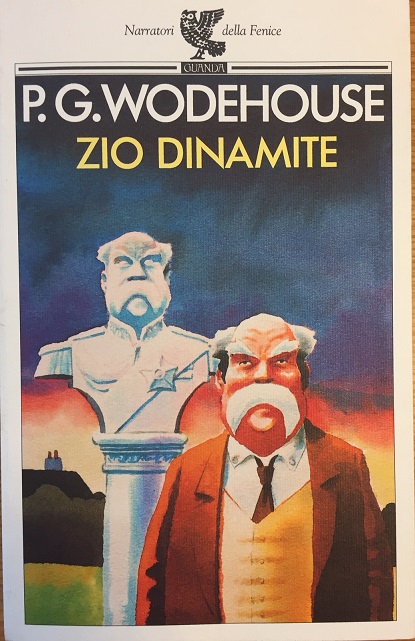 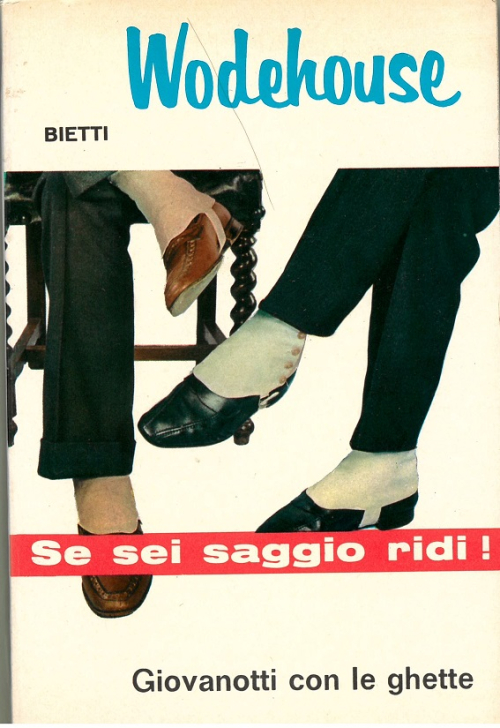 To my mind one of the most attractive covers in the collection is this Swedish dust-jacket by Björn Berg for Birgitta Hammar’s translation of Full Moon (Fullmåne), one of a number of Wodehouse covers that Berg illustrated in 1984. He also includes a brief portrait sketch of Wodehouse on the back of the jacket (and one of the Empress of Blandings on the title page). 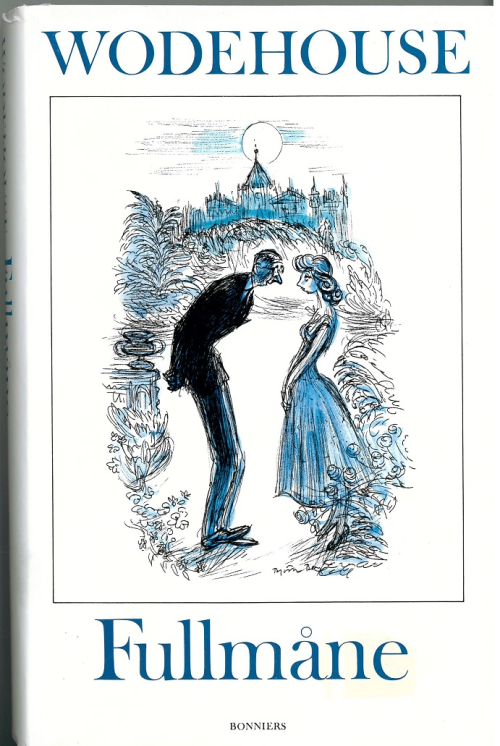 The back cover is also put to good use in Birgitta Hammar’s 1956 Swedish translation of French Leave (Fransysk visit), describing the characters and outlining the plot of the story on a ‘menu’ from the Hotel Splendide in the fictional French town where the story is set. 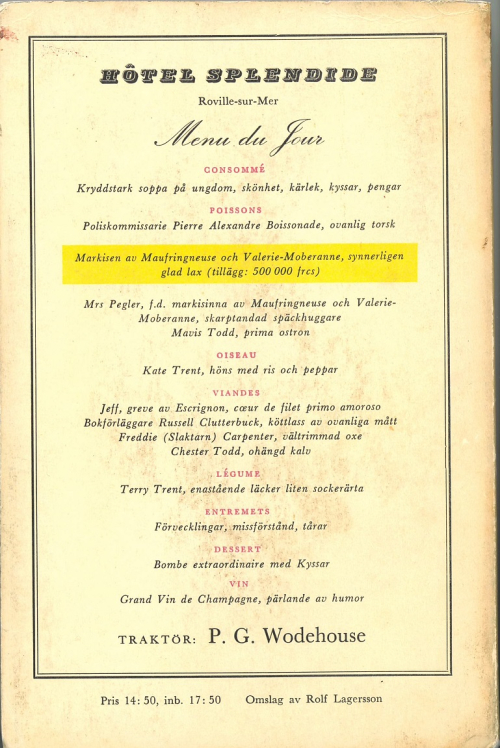 As for the French themselves, this 1947 translation of My Man Jeeves (Mon valet de chambre) has a vignette by J. Jacquemin which I think nicely captures Jeeves’s imperturbability. 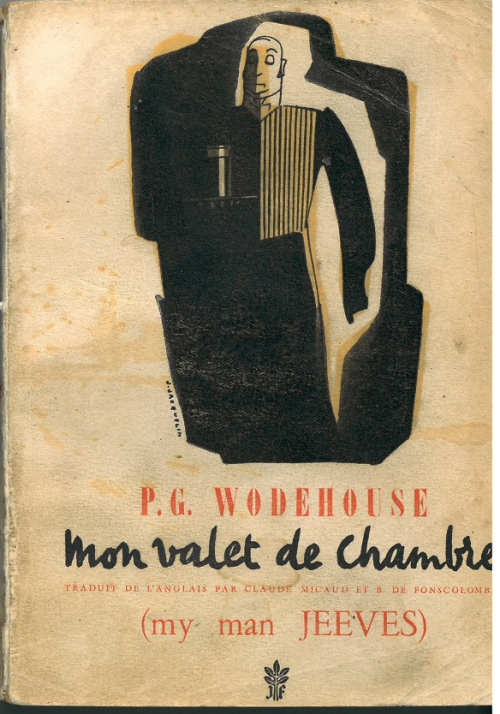 A later series of Jeeves stories in French all use the same cover image of British actor Arthur Treacher playing the role, but change the colour of his cravat and buttonhole for each cover. I’m not sure Jeeves would really have approved of this sartorial frivolity; perhaps that’s why he looks rather troubled here. 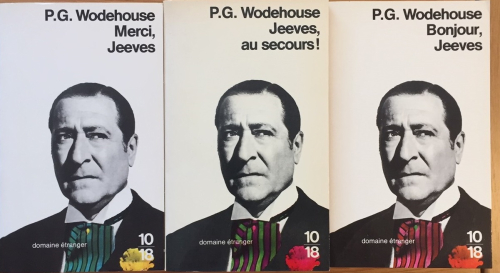 But for sheer oddity, I think the prize goes to the Dutch for this 1974 cover for Jan Wart Kousemaker’s translation of Plum Pie (Plumpudding) which at first glance looks more like a cheap thriller than a collection of humorous stories. 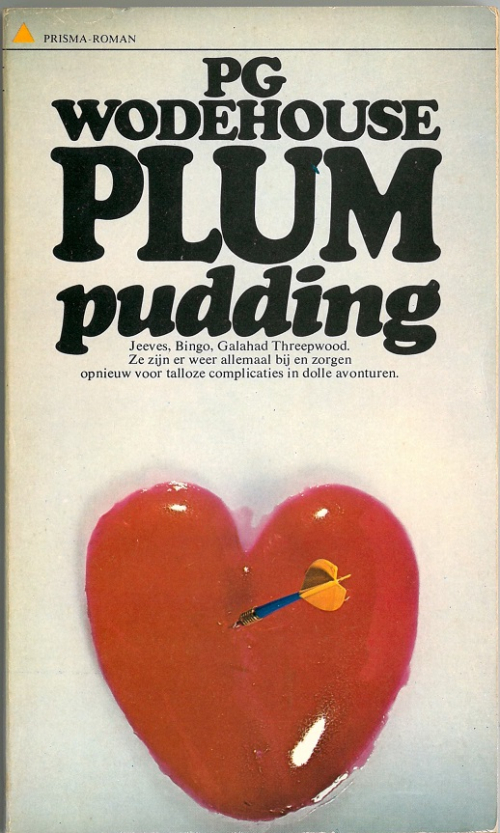 Of course, we should never judge a book by its cover, and there is much more to say about this wonderful donation and the ways in which translators have tackled Wodehouse’s distinctive style. For now the books will go to be accessioned and catalogued so that they can be available for students of literary translation and reception – and for interested Wodehousians – in our reading rooms. 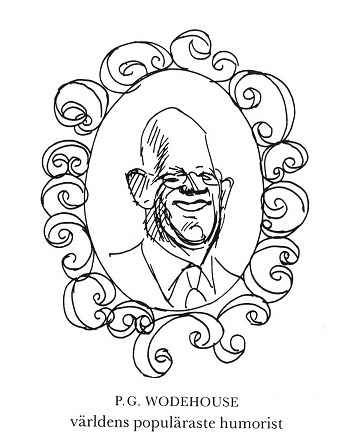 P.G. Wodehouse, ‘the world's most popular humourist’. Sketch by Björn Berg from the dustjacket of Fullmåne