In the 15th century the earliest European printers used what we commonly call ‘gothic’ or ‘black-letter’ typefaces, reflecting contemporary handwriting styles. In Italy, however, humanist scholars had been developing a new ‘roman’ handwriting based on the lettering of classical inscriptions, and the first printers in Italy were quick to design typefaces based on this style.

Over the next two centuries, roman types and handwriting gradually became standard in most European countries, but in some parts of northern Europe black-letter types survived much longer. 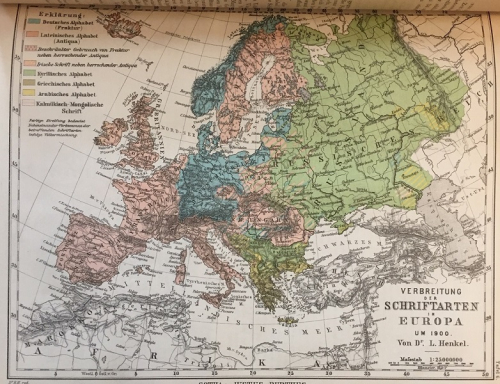 Map showing the distribution of script styles in Europe at the end of the 19th century, from Petermanns geographische Mitteilungen (Gotha, 1901) P.P.3946. German letters. marked in blue, are shown as dominant in Germany, Austria, Norway and Estonia, although they were already falling out of use in the last two countries

In Germany these forms remained dominant until well into the 20th century, alongside a handwriting style, called ‘Kurrentschrift’, based on late mediaeval models. 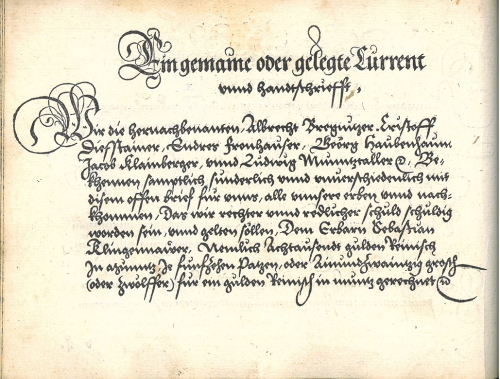 Black-letter types are generally called ‘Fraktur’ in German, although technically the term refers only to one of four families of black-letter type, the others being Schwabacher, Textura and Rotunda. 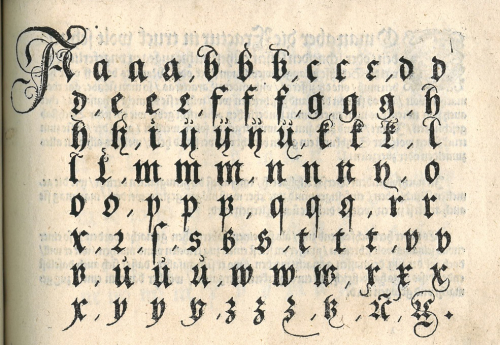 Roman types were not unknown in Germany, and were often used for printing Latin and other foreign-language texts. Latin quotations and foreign loan-words were also typically printed in roman type within a Fraktur text to highlight their difference. Sometimes different fonts appeared in a single word if it had a Latin suffix or root, as in the word ‘vegetabilischen’ in the example below. 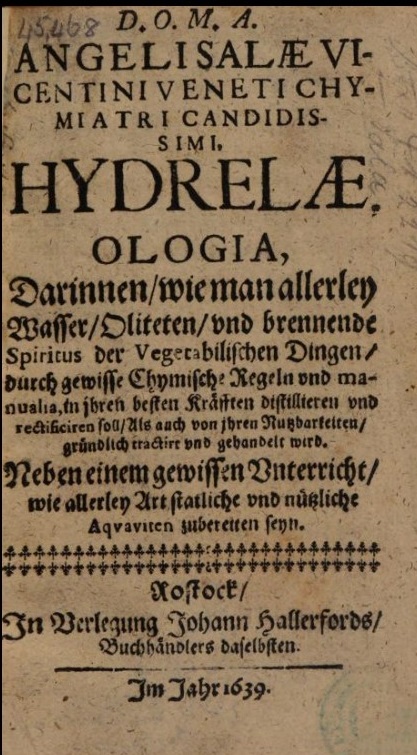 From the late 18th century onwards some printers began to produce German texts wholly in roman type and some Germans adopted roman handwriting. The question of whether Germany should move over to roman types and scripts or maintain Fraktur and Kurrentschrift grew into a national debate in the course of the 19th century. Philologists came out on both sides, with Jacob Grimm a notable supporter of roman styles, and the lexicographer Daniel Sanders a staunch defender of Fraktur and Kurrentschrift. 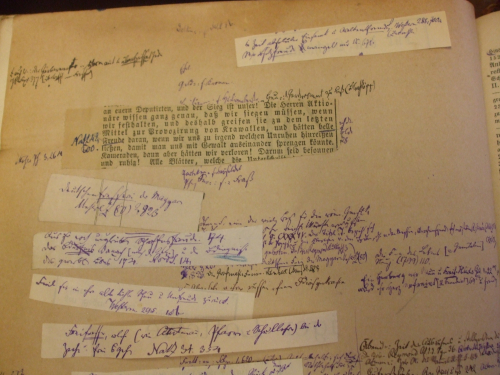 Detail of working notes (in German script) by Daniel Sanders from an interleaved copy of his Wörterbuch der deutschen Sprache (Leipzig, 1860-1865) L.R.276.a.3.

Some arguments were practical: both sides claimed that their preferred style caused less eye-strain, and advocates of roman type argued that its use would make German easier for foreign learners. Supporters of German type and script deployed the romantic argument that these were an innate part of the German character. This association had a long history: in his 1533 handwriting manual, Wolfgang Fugger claimed that “It does not look well when we write German in Latin letters”.

In 1876 a German Orthographical Conference came out cautiously in favour of a move towards roman letters (Daniel Sanders was one of four delegates who voted against) but this never became official policy. In 1911 the Reichstag debated a petition to teach roman letters alongside German ones in schools, but defenders of German styles lobbied strongly against such a move and, despite initial support, the motion was defeated. In the same year, graphic designer Ludwig Sütterlin was commissioned to design a new form of Kurrentschrift for use in schools. This was adopted in most of the German states and was known by the designer’s name. 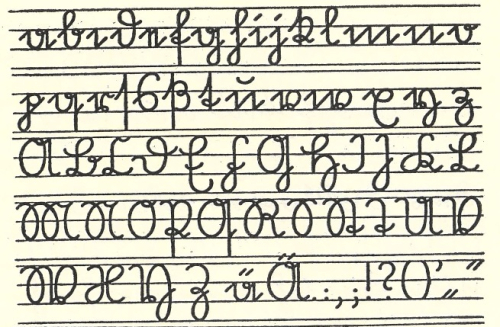 Although German letters still had official status, the first decades of the 20th century saw an increase in books printed using roman types. In the 1920s the typographical experiments of the Bauhaus and of designers like Jan Tschichold gave roman types an added aura of modernity. 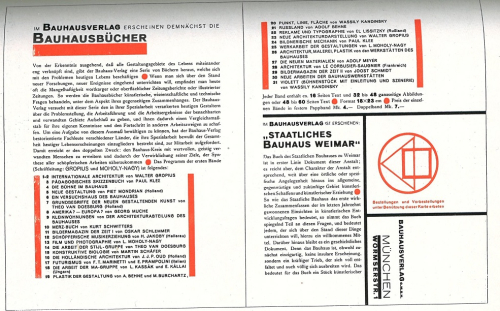 Tschichold saw ‘national’ scripts such as Fraktur as symbols of a backward-looking nationalism to be rejected in an increasingly internationalised world. The early years of Nazi rule seemed to confirm this view as Fraktur received official blessing, but the Nazis’ attitude to type and scripts was in fact ambivalent. They used both roman and Fraktur types in their propaganda material, and Hitler, in a speech given on 5 September 1934, actually criticised ‘street signs and typewriting in original Gothic lettering’ as examples of a ‘pretended Gothic internalisation’ unsuited to a modern nation.

In 1941, the Nazi government formally banned the use of German fonts and scripts. This move was partly driven by Germany’s conquests in the early part of the Second World War, which created a need to publish and communicate in a form more easily understood by non-Germans. However, the document declaring the ban gave the totally false explanation that Fraktur types were a Jewish invention (‘Schwabacher Judenlettern’) and were therefore not ‘German’ at all. 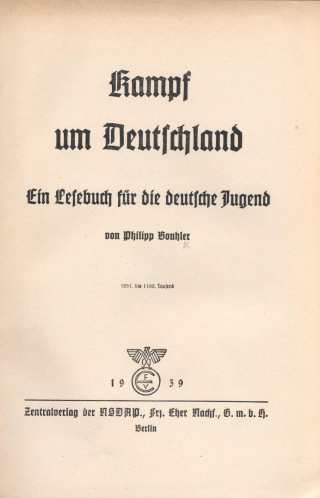 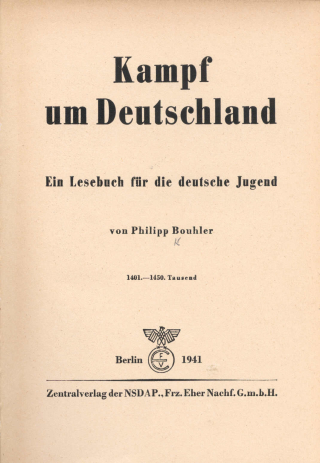 Although the ban was a product of the Nazi regime and backed by a spurious antisemitic argument,  German type and handwriting remained linked in the minds of the post-war occupying forces with extreme nationalist ideology, and there was little enthusiasm for reviving them. Fraktur did not completely disappear: some publishers continued to use it in the late 1940s, and it survived in publications such as Bibles and hymn-books into the early 1970s. Some West German states taught Kurrentschrift in schools in the 1950s, although in addition to roman rather than as an alternative. But gradually roman became the norm, and today it is the dominant style in Germany as in the rest of Western Europe

However, Fraktur remains a part of the German landscape on shop and restaurant signs and in commercial logos, contexts where its use suggests tradition and authenticity. It has also become a hallmark – not just in Germany – of music scenes such as heavy metal. But there are also more serious uses: type designers continue to create and work with Fraktur fonts, and the Bund für deutsche Schrift und Sprache promotes the study and use of German letters. And of course anyone wanting to study older German literature, history or bibliography needs a knowledge of the typefaces and scripts used in books and manuscripts. Fortunately there are many guides both printed and online (such as this one) to help those keen to learn these skills.