Up the garden path with the Brothers Čapek and friends

This is National Gardening Week, and with three Bank Holidays in quick succession, many of us will be inspired to get out and take stock of our plots, tubs and window-boxes. Not surprisingly in view of the British fondness for horticulture, one of the first and most popular works by Karel Čapek to appear in English translation was Zahradníkův rok (‘The Gardener’s Year’: Prague, 1929; YF.2005.a.31522 ). With its lively illustrations by the author’s brother Josef, it quickly became a favourite, and the translation by M. and R. Weatherall, which ran into multiple impressions, was succeeded by a more recent one by Geoffrey Newsome (London, 2004; ELD.DS.288828), testifying to its lasting appeal. 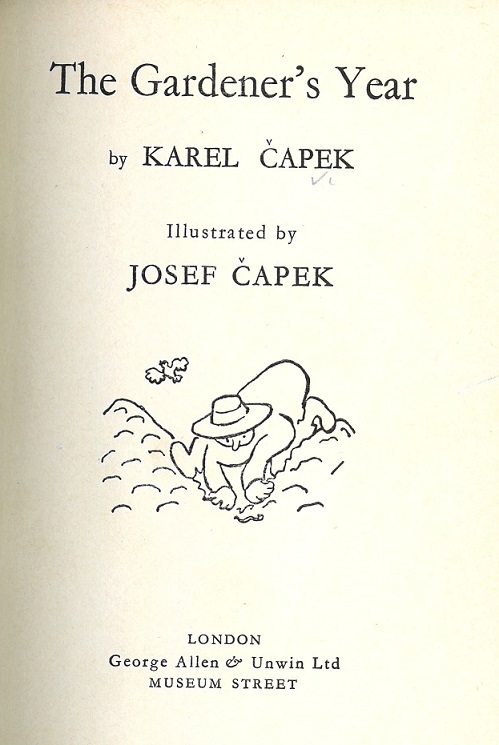 Čapek himself was an enthusiastic gardener, and part of the enduring charm of his book is his lack of illusions about the cussedness of nature and the sheer hard labour involved in maintaining a garden. The text consists of a chapter for every month of the year, interspersed with others on topics such as ‘How a man becomes a gardener’, ‘Seeds’, ‘On the Cultivators of Cacti’ (Czech cousins of the Kaktusfreunde portrayed in paintings by Carl Spitzweg?), ‘The Blessed Rain’ and ‘On Market Gardeners’.

British readers familiar with Dorothy Frances Gurney’s poem ‘God’s Garden’, (in God’s Garden, & other verses: London, [1933]; 011641.df.93), with its claim that ‘One is nearer God’s heart in a garden / Than anywhere else on earth’, may be pulled up short by Čapek’s far less sentimental view of things. Nature, one senses, is never more belligerent than when assailed by the gardener. From the very first attempts to lay out a garden (‘the best way is to get a gardener’) to the conclusion that ‘the gardener wants eleven hundred years to test, learn to know, and appreciate fully all that is his’, Čapek leaves us in no doubt that the way of the gardener is a stony one – in every sense. Indeed, the chapter ‘The Gardener’s May’ deals precisely with ‘the greatest pleasure and special pride of the gardener, his rock or Alpine garden’. This, he suggests, is so called because it ‘gives its owner opportunity for performing hazardous mountaineering feats’ as he lunges and scrambles among the ‘picturesque and not altogether firm stones of his rock garden’ in his attempts to plant and weed it. 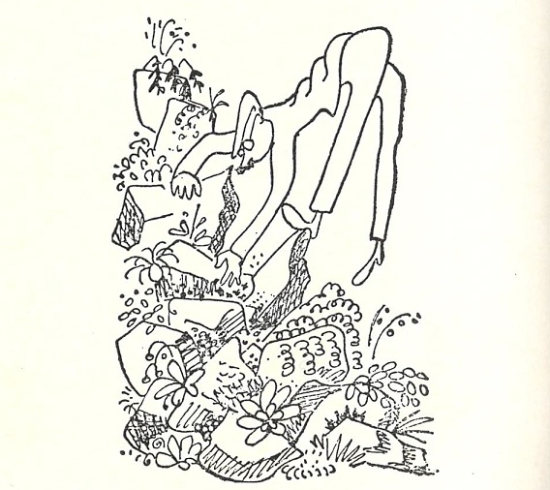 The intrepid rock-gardener in May

Nor does Čapek underestimate the crimes of passion of which the fanatical gardener is capable in the pursuit of some prize specimen for his rockery, from stealing Campanula morettiana by night to outright murder. Those too fat or too cowardly to accomplish this shamelessly weep and implore the proud owner for a cutting, or wheedle one from the local florist. However, once acquired these treasures frequently fail to come up to expectations: the hard-won campanula proves to be nothing but a horse-radish. 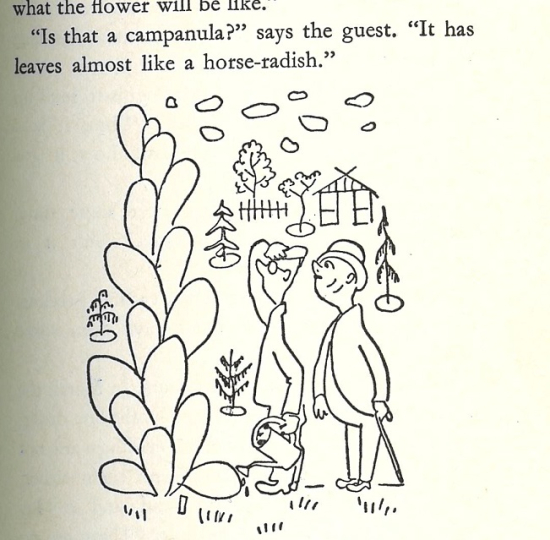 The campanula that wasn’t.

A generation earlier another author, Mary Annette Beauchamp, had described the trials and pleasures of making a garden in East Prussia with the intervention of itinerant Russian labourers and her redoubtable German husband, Graf von Arnim, ‘the Man of Wrath’. Such was the popularity of Elizabeth and her German Garden (London, 1898; 012643.cc.34) that her subsequent works appeared as ‘by the author of Elizabeth and her German Garden’ before she adopted the permanent nom-de-plume of Elizabeth von Arnim. Yet there is nothing sweetly quaint about her sharp perceptions of the Anglo-German clash of cultures in the garden and the drawing-room, where her acid perspicuity frequently recalls Jane Austen. Nor is she a mere armchair gardener who scorns to get her fingers dirty; from the excitement of ordering from catalogues to the headaches of persuading her acquisitions to take root in sandy Prussian soil with the fitful help of her sometimes incredulous staff, she shows not only a deep love of gardening but a thorough understanding of the challenges which it presents.

Like her, Čapek is often thwarted by the resistance of his local terrain to adapt to English models of horticulture. ‘I know an excellent recipe for an English lawn,’ he declares. ‘Like the recipe for Worcester Sauce – it comes from an “English country gentleman”’ who concludes ‘If you do this for three hundred years, you will have as good a lawn as mine’. In the meantime he has to contend with bald patches and dandelions, and to persuade his neighbours to look in and water it when he goes away on holiday in August. Failing to persuade a little old lady to bring her goat to eat the clippings, he has to pay a reluctant dustman to remove them (‘You know, sir,’ he says, ‘we’re not supposed to take it.’) 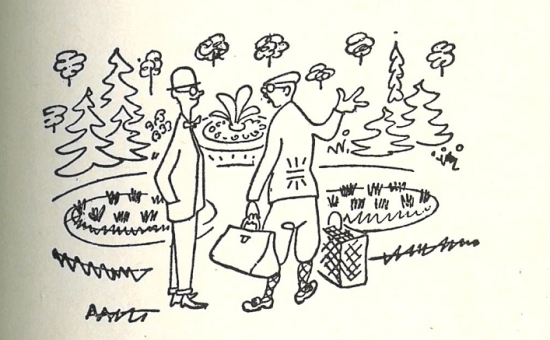 How to lose friends by asking your neighbour to keep an eye on your garden.

It is well known that following a spell of fine weather A&E departments in hospitals throughout the country see an influx of patients with all kinds of gardening-related injuries from infected wounds inflicted by rose-thorns to backs strained by over-enthusiastic lawn-mowing. In a sense Karel Čapek’s death was linked to his love for his garden. Although offered the chance to go to exile in England, where he had many friends, to escape persecution by the Nazis, Čapek refused to leave Czechoslovakia. While repairing flood damage to the family summer-house and garden in Stará Huť, he caught a cold which turned to pneumonia, from which he died on 25 December 1938. In the final paragraph of The Gardener’s Year he writes, ‘We gardeners live somehow for the future … I should like to see what these birches will be like in fifty years’. Sadly, he did not live to do so – but every gardener can draw comfort from the words, ‘The right, the best is in front of us. Each successive year will add growth and beauty’.