The Boyfriends of Giarre

I am very lucky: I live in a country where, since 2008, homophobia is illegal, and I work for an institution which actively promotes diversity in all its aspects. I am very lucky: I come from a country where, even though homophobia is not yet strictly speaking illegal, the LGBTQ movement has been active since its early stage: 1971, two years after the Stonewall riots, when the journal FUORI! was founded by one of the first gay associations in Italy. F.U.O.R.I., besides being the acronym of ‘Fronte unitario omosessuale rivoluzionario italiano’, as a word in itself means ‘Out’.

One of its founders was Mario Mieli (1952-1983), who, after spending some time in London as a student, where he took active part in the London Gay Liberation Front, went back to Italy and founded the journal in Turin. In 1972, Italy witnessed the first public demonstration by homosexuals in Sanremo. This was a protest against the ‘International Congress on Sexual Deviance’ which was organised by the Catholic-inspired Italian Centre for Sexology. 40 marchers attended, from different gay associations, such as the French Front homosexuel d’action révolutionnaire (FHAR), the Belgian Mouvement Homosexuel d’Action Révolutionnaire (MHAR), the British Gay Liberation Front, the Internationale Homosexuelle Révolutionnaire (IHR ), and the recently founded FUORI. 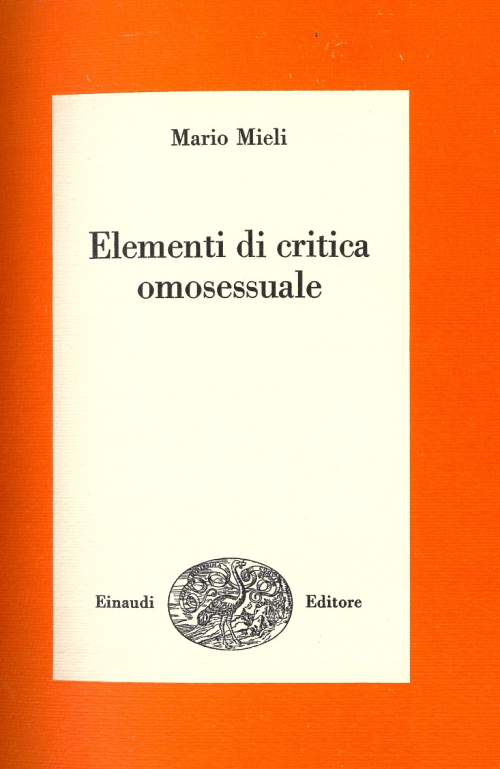 The first gay liberation movement in Italy, was attempted by Aldo Mieli (1879-1950), a scientist and pioneer of gay rights; he was in contact with the German sexologist Magnus Hirschfeld, one of the co-founders of the Scientific Humanitarian Committee, which campaigned for the repeal of the law criminalising homosexuality in Germany. Aldo Mieli was the only Italian to participate in the first International Congress for Sexual Reform organised by Hirschfeld in 1921 which took place in Germany and led to the formation of the World League for Sexual Reform (further congresses were held in Copenhagen in 1928; London in 1929; Vienna in 1930; and Brno in 1932).

As a Sicilian, I feel particularly moved by the events that led to the birth of Italy’s largest national gay organisation, Arcigay. This is what happened: on 31 October 1980, in Giarre (a little town on the east coast of Sicily) two young men, Giorgio Agatino Giammona, 25, and Antonio Galatola, 15, who had disappeared two weeks before, were found dead, hand in hand, each killed by a gunshot wound to the head. The boys were known locally as ‘i ziti’ (‘the engaged’). Giorgio was openly gay and was also nicknamed ‘puppu cô buḍḍu’ (meaning ‘licensed homosexual’, intended in a derogatory way).

The investigations led to the identification of Francesco Messina, Galatola’s nephew, as the murderer. Messina was twelve years old at the time and below the age of criminal responsibility. He initially told the police that Giammona and Galatola had forced him to shoot them and had threatened that otherwise they would kill him, although two days later he changed his story, claiming that he had been pressured to confess.

However, the evidence suggested that the two had indeed been killed by Messina on behalf of the families and apparently with the couple’s own approval, convinced that they could never live peacefully. Italian public opinion had to acknowledge the problem of discrimination against homosexuals. The tragic story is discussed in Miguel Andrés Malagreca’s study Queer Italy: contexts, antecedents and representation (New York, 2007; YD.2007.a.8982).

As an immediate response, the first Sicilian branch of FUORI was founded. A month later in Palermo a group of activits including Nichi Vendola, a young conscientious objector who would go on to be president of the Puglia region from 2005 to 2015, founded Arcigay, the first section of the cultural association Arci dedicated to gay culture. Around the same time, lesbian feminist women founded the first Sicilian lesbian collective – Le Papesse (‘the female popes’).

Unfortunately, even though same-sex relationships have been legal in Italy since 1890, gay marriage is not yet. A lot is yet to be done, but Italy has come a long way, same-sex civil partnerships have been legal since 2016, and not only Puglia but Sicily too has had its first openly gay president: Rosario Crocetta was mayor of Gela (on the southern coast) from 2003 to 2009, and President of Sicily from 2012 to 2017. And just a few weeks ago, on 8 June, my home town, Messina, held its very first Gay Pride march, called ‘Stretto pride Messina’ and promoted with this lovely video.