In an earlier post I wrote about the use and long survival of ‘gothic’ typefaces and handwriting in the German-Speaking countries. It was surely no coincidence that, at the time when the printing press and the influence of humanist thought and teaching were beginning to popularise ‘Roman’ printing and writing styles, the first printed writing manuals for German scripts also began to appear.

One of the first and most influential creators of such manuals was the Nuremberg writing and mathematics teacher Johann Neudörffer (1497-1563), who published his first collection of alphabets, designed for his own students and usually referred to as the Fundament, in 1519 (1267.g.24.(3)). His major work, Ein gute Ordnung und kurtze Unterricht der furnemsten Grunde aus denen die Jungen zierlichs schreybens begirlich, mit besonderer Kunst und Behendigkeyt unterricht und geubt mögen werden, appeared 19 years later. 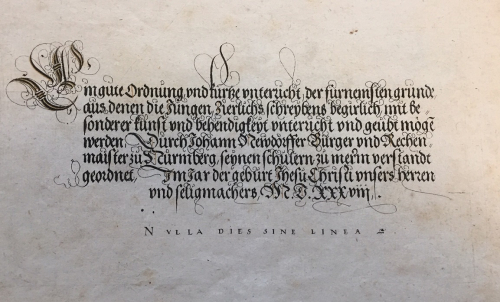 The Gute Ordnung contains not just alphabets and examples of how to form and join letters, but also models for the kinds of  documents his students would need to prepare in their later careers as court or civic scribes. 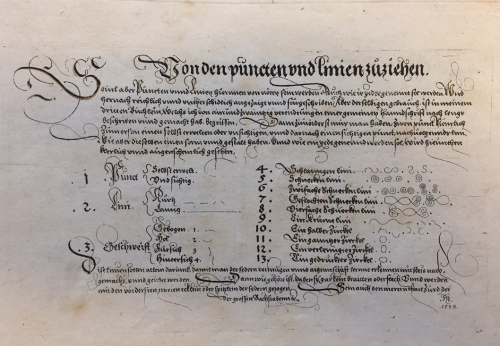 Practical guidance on points and lines from Ein gute Ordnung 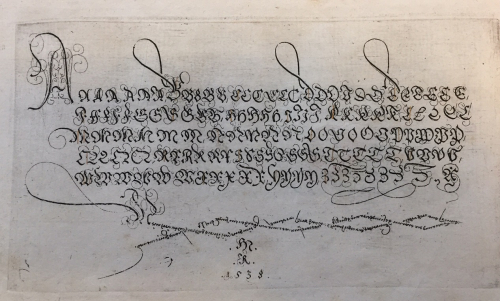 An alphabet in capitals from Ein gute Ordnung

There are also models of scripts using prayers, Biblical quotations and educational maxims. Most are in German hands, although there are some samples of Roman and italic lettering. There are large and elaborate capitals, and texts in script almost too tiny to read, practical scripts for everyday work and decorative ones for special occasions. 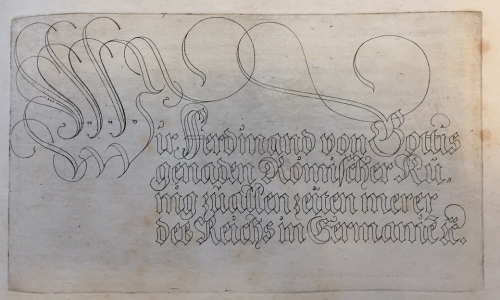 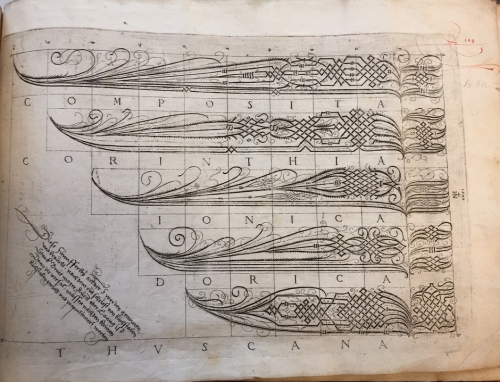 Perhaps the most complex model is a prayer presented as a labyrinth pattern. 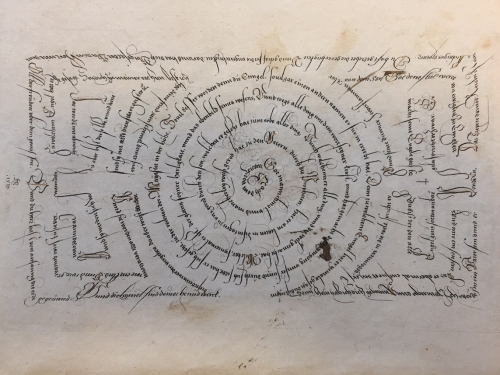 Because of the method of reproduction used, many of the plates also appear in reverse, which were often bound in with the others. This, together with the fact that Neudörffer produced more plates in later years which were bound into some copies, makes the work a bit of a bibliographical challenge. 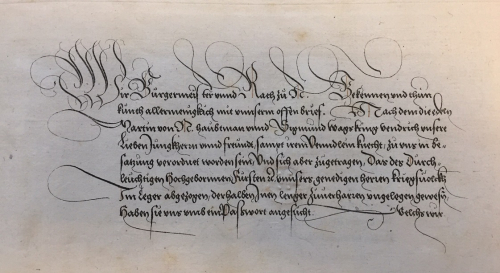 A page (above) and its reverse (below) from Ein gute Ordnung 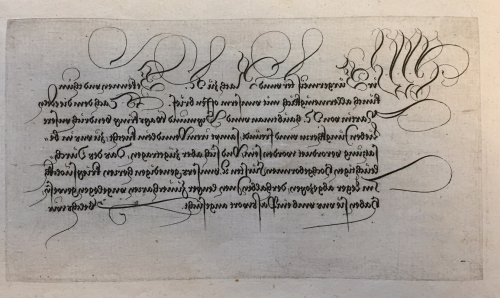 The 1519 Fundament and Ein gute Ordnung are copy-books with little or no explanatory text, but in 1549 Neudörffer published what was more of a descriptive textbook. Ein Gesprechbüchlein zweyer schüler, wie einer den andern im zierlichen schreyben untherweyst takes the familiar pedagogical form of a dialogue between instructor and learner, although rather than the more familiar model of a teacher or parent in the role of instructor, Neudörffer’s dialogue is between fellow students of a similar age. Stephan is keen to improve his calligraphy skills with the help of the more experienced Johann (based on Neudörffer’s own son). “I’m ashamed to let you see my handwriting,” Stephan explains at the start of the first lesson, but Johann reassures him, “It isn’t so very bad, at least one can read it,” and goes on to explain how to cut and hold a quill, how to make basic lines, points and letter-shapes, how to form and join up letters and so on. 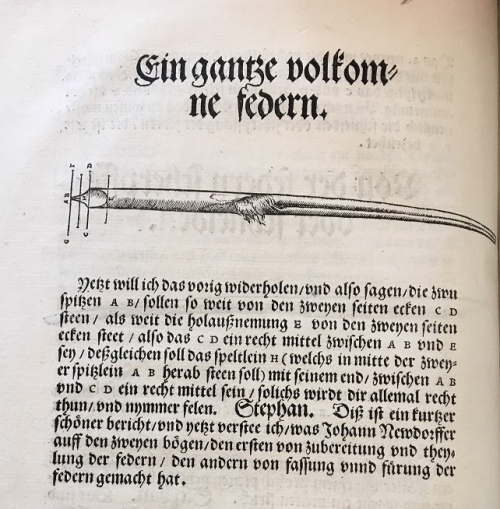 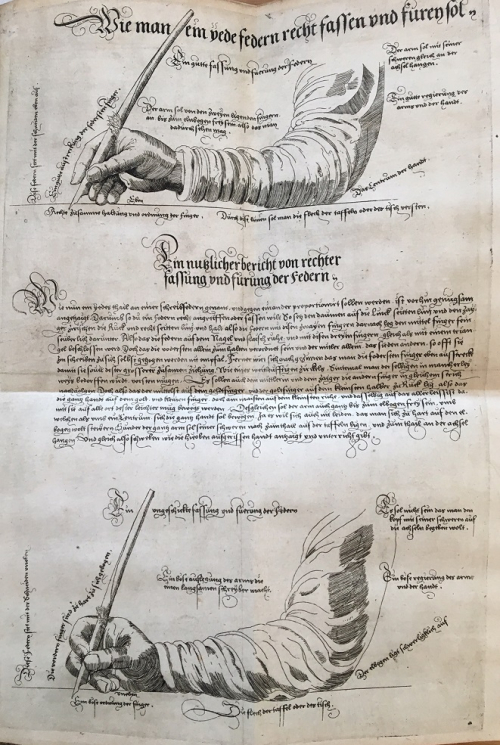 Under the title Schreibkunst, Neudörffer’s grandson Anton reissued the Gesprechbüchlein in 1601 with an additional collection of letters and alphabets, some of them so elaborate that it becomes almost impossible to decipher the basic letter-forms beneath the flourishes. 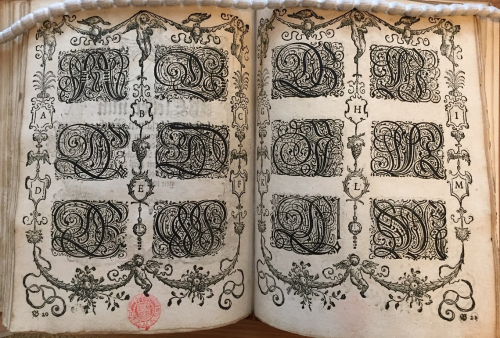 Decorative letters A-L (above) and R-S (below) from  Schreibkunst 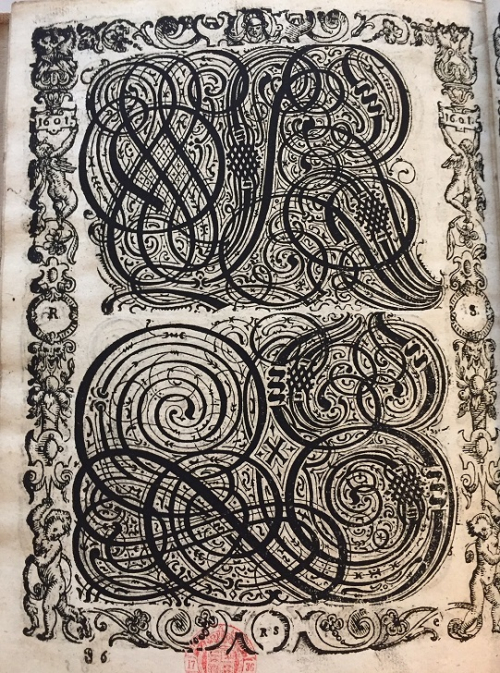 Neudörffer helped to shape the style of both German handwriting and German printing types in the 16th century, and thus to influence German writing and printing styles for four centuries. Today he is recognised as the father of German calligraphy, and has inspired modern designers of gothic typefaces who have given his name to their fonts.