The term Bauhaus evokes functionality, social utopia, maybe even novel pedagogical thinking, but this is often associated with its role as a school of design. However, the Bauhaus developed out of a movement that was split between the rational and what Pádraic E. Moore refers to as the ‘cosmically-inclined’. This year’s Bauhaus centenary gives pause for thought to the contrasting utopianisms at the heart of the school, and to the esoteric elements, which have been given less attention in its historiography.

These elements are often reduced to the influence of Wassily Kandinsky, who articulated a ‘spiritual vision’ for 20th-century art. Kandinsky sought to unite form, colour, sound, and movement in ‘the gradual forming structure of the new spiritual realm’. Der gelbe Klang (‘The Yellow Sound’) is one such ‘symphonic composition’ that paved the way for a new theatre. It first appeared in Der Blaue Reiter Almanac (Munich, 1912; C.107.h.16) and comprises six ‘pictures’ almost without dialogue, detailing elaborate staging and actor movements.

Kandinsky was a key influence on Lothar Schreyer, pioneer of expressionist theatre, who, according to David F. Kuhns, ‘built a whole theory of performance on the expressive process first suggested in The Yellow Sound’. 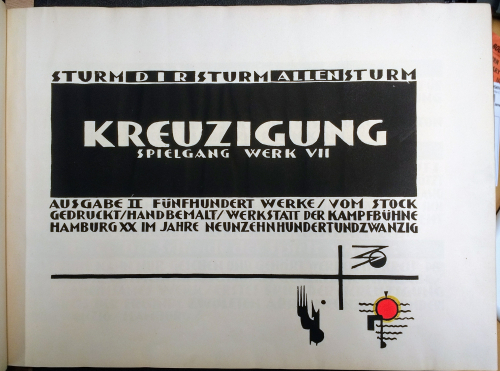 Where Kandinsky offers lengthy stage directions as a surrogate for synesthetic art experience, Schreyer’s Kreuzigung: Spielgang Werk VIII attempts to represent a spiritual experience in a singular score, employing a distinct set of signs and symbols, colours and forms. Its publication triggered Walter Gropius to invite Schreyer to the Bauhaus, where he led the stage workshop between 1921 and 1923. 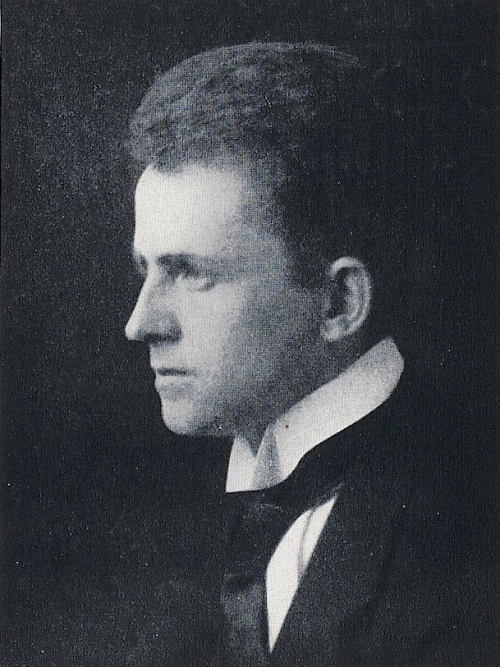 Kandinsky was influential but Schreyer’s Bauhaus experience was shaped more by Johannes Itten and Gertrud Grunow, two less familiar names. Schreyer’s thinking around rhythm maps onto ideas simiular to theirs. Itten led the Bauhaus Preliminary Course [Vorkurs] and Grunow the course in ‘Practical Harmonization’ [Praktische Harmonisierungslehre], both forming the foundation of a student’s education. Itten’s devotion to Mazdaznan opened his practice to regulating physical exercises, including breathing and rhythmic drawing. Likewise, Grunow encouraged rhythmic breathing and a response to colours through movement. Both were committed to strengthening students’ ‘self-awareness in relation to both the corporeal and the spiritual’ (Linn Buchert). In the focus on fundamental words, tones, colours, forms, Schreyer also encourages in each of his practitioners an inner harmony, sound, or rhythm, which pushes to a limit the experience of ‘word’. This is more than the ‘transmission of a message’; it is the evocation of spirit.

Kreuzigung developed out of Schreyer’s work with Der Sturm, the most influential journal of German expressionism, an offshoot of which, Die Sturm-Bühne, he edited in collaboration with the Hamburg Kampfbühne, his parallel theatre project. Schreyer’s expressionism went against the overly literary dramatic tradition, which he declared defunct: in his 1916 essay ‘Das Bühnenkunstwerk’, he wrote: ‘It is necessary to forget theatre. […] A stage art [Bühnenkunstwerk] is necessary’. That stage art privileged performance over print, synesthetic experience over dialogue. Kreuzigung then returns to the print medium in order to explode the representative possibilities of literature.

The book is not described as a playscript [Theaterstück], rather Schreyer prefers the neologism Spielgang. Whereas the usual term refers to a piece, the new term draws attention to the mobility of the text through Gang (path, walk, derived from the verb gehen, to walk or go). It is the only Spielgang to materialize from a workshop process that was usually reserved for the Kampfbühne’s community of artists. Schreyer only rarely allowed outsiders into performances and practically no reviews. Yet Kreuzigung became the exemplary work ‘to grant others the knowledge’ of this creative experimentation through, in Schreyer’s own words, ‘the system and sign, in which a stage work was given the stability of form [die Beständigkeit der Gestalt]’.

The text is evocative rather than wholly readable. It works in connection with the representation of movement, figures (as coloured forms), and sound. That is apparent from the title page, headed with the motto, ‘Sturm dir Sturm allen Sturm’, which might be translated as ‘Storm to you Storm to all Storm’ but also works on the level of sonic rhythm and visual symmetry, especially in the heightened artistry of the wood-block setting. 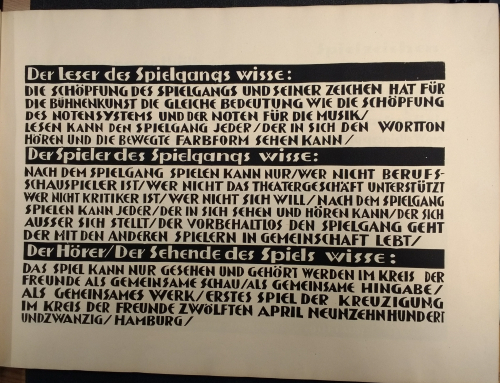 ‘What the reader must know‘, from Kreuzigung

The next page sets out what the reader, performer, and spectator ‘must know’. Schreyer writes in the essay ‘Bühnenwerk Spielgang und Spiel’ that ‘in order to learn the Spielgang system and its signs, no particular course of study is necessary’. Yet, the universal pretensions are qualified in the work itself as ‘Anyone can read the score who can hear word-tones [Worttone] internally and see the movement of coloured form’. Likewise, ‘The play can only be seen and heard with a circle of friends as a shared experience, as a shared act of devotion, as a shared work’. On one level, Kreuzigung acts as a representation of performance but, on another, it points to the impossibility of that very representation. It is at once readable by all and penetrable only by the initiated. 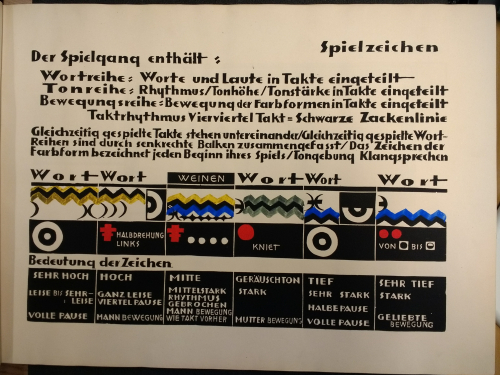 The system and symbols from Kreuzigung

The system is unpacked on the following page. Three levels are represented on a stave: word sequence, tone sequence and movement sequence. A zigzag line on the tone sequence denotes pitch based on its position and on the yellow (high) or blue (low) lines. The bracket symbols refer to volume and the target signs to pauses in both sound and movement. Words are stretched and contracted as appropriate to the bar by way of the woodcut text. The cross-like symbol relates to the ‘Man’ character, the single red circle to the ‘Mother’ character, and the two red circles to the ‘Beloved’ character.

The figures of ‘Man’ and ‘Beloved’ from Kreuzigung

These symbolic referents point to the ‘de-individuated “art-body” stripped of socially conditioned speech and movement patterns […] capable of expressing universal truths’ (Buckley). In fact, the Spielgang was a communal creation based on an original process of meditation and vocal practice to identify the performer’s ground-tone [Grundton], becoming word-tones [Wortton] when applied to language and Sprachtonspiele when in sentence combinations.

Schreyer glosses the play itself as a ‘desperate struggle for humanity against daemonic forces’. It evokes a post-war apocalypse, around which man wanders wounded in the company of two female characters in the conventional guises of mother and mistress, ultimately seeking escape through spiritual transcendence. 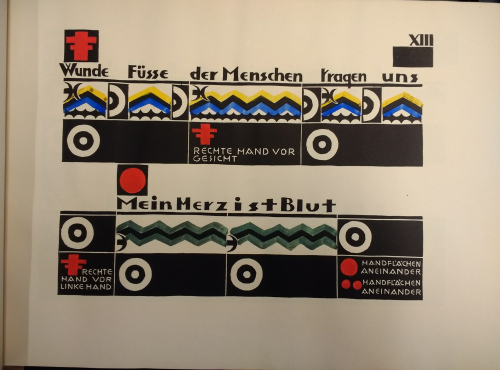 ‘Man: Wounded feet of men carry us | Woman: My heart is blood’, from Kreuzigung (all translations by Mel Gordon)

Ultimately, while salvation is demanded, it does not arrive, as the figures are left to call for the world to wake, to realize itself beyond the material desperation. Yet, Kreuzigung is not just the representation of some failed transcendence; that would neglect the formal purity of a project less concerned with content. Rather, ‘the actual logic of the work of word art [Wortkunstwerk] is more of an artistic logic’. Spiritual transcendence is a process entered into in the performance and experience of such universal stage art. 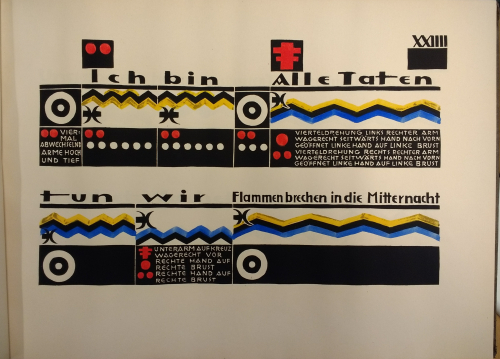 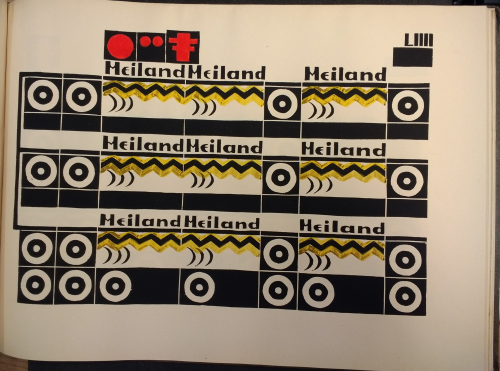 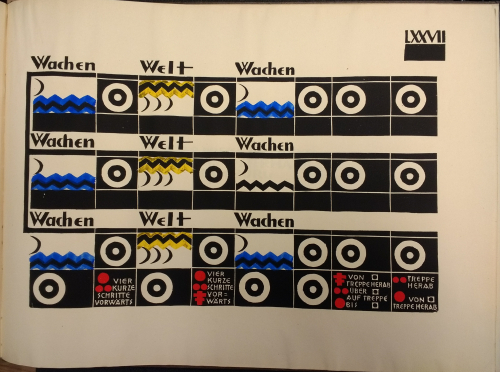 Kreuzigung is an attempt to encapsulate the anti-literary in print, what Buckley terms the manifestation of Schreyer’s ‘anxious utopianism’, which enacts the tensions ‘between its knowledge and its hopes – between the Werk as commodity and the Arbeit of the community, between mediation and immediacy’. A contemporary of Schreyer, Robert Musil, articulated this negotiation between spirit and rationality a year after the publication of Kreuzigung, as ‘an abiding miscommunication between the intellect and the soul. We do not have too much intellect and too little soul, but too little precision in matters of the soul’. In the urge to leave something material, ‘out of which creative people in the future could understand what forces had moved and shaped our plays’ (Schreyer, Erinnerungen), Schreyer and the Kampfbühne showed their precision in works of the soul and underlined that tension at the heart of the Bauhaus. Kreuzigung is thus the result of precise printing craft and a meticulous pedagogical process that might just also tend towards the divine.

Linn Buchert, ‘The spiritual Enhancement of the Body: Johannes Itten, Gertrud Grunow, and Mazdaznan at the early Bauhaus’, in Bauhaus Bodies