The Duke of York’s Theatre is currently playing Henrik Ibsen’s Rosmersholm, a play that Michael Meyer suggests ‘marks Ibsen’s final withdrawal as a playwright from the polemical field’. It is marked everywhere by a curious sense of withdrawal, as the protagonist John Rosmer, heir to the Rosmersholm legacy and former clergyman, stirs himself towards a revolutionary popular politics, before abruptly asserting its futility. Likewise, the complex love affair between Rosmer and Rebecca West reaches the possibility of marriage, before that becomes impossible because of Rebecca’s guilt over her complicity in the suicide of Rosmer’s first wife and her manipulation of Rosmer towards her radicalism. Hints of idealism amidst the angst-ridden interactions dissolve into a resignation to unchangeable political, psychological and moral realities. This kind of thematic disappointment works also on the level of language, and Toril Moi suggests it depicts a dark modernity ‘where language has come to seem untrustworthy’. This makes you wonder: if the play is about the impossibility of communication, what does it mean to read and experience it at one remove, in translation? 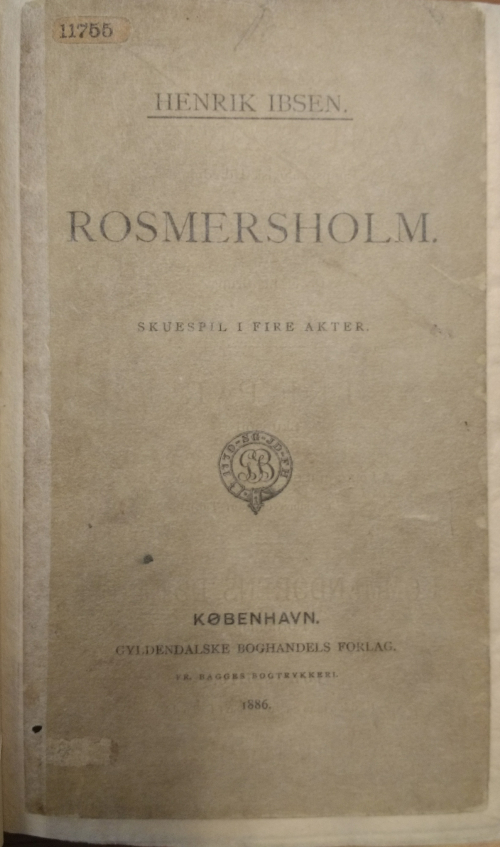 Ibsen is notoriously difficult to translate, hence the many translations and adaptations of his plays over the last century. This includes the new four-volume Penguin Ibsen, the third volume of which contains a new translation and critical apparatus for Rosmersholm and will be released in December this year. Mark Lawson reminds us of one of the problems of translating Ibsen: that he wrote in Danish in Norway at a time of linguistic transition, when Danish remained in use but was being superseded by Norwegian. ‘This means that the translator … needs two different sets of dictionaries and thesauri and a strong sense of the historical evolution of Scandinavian languages.’ 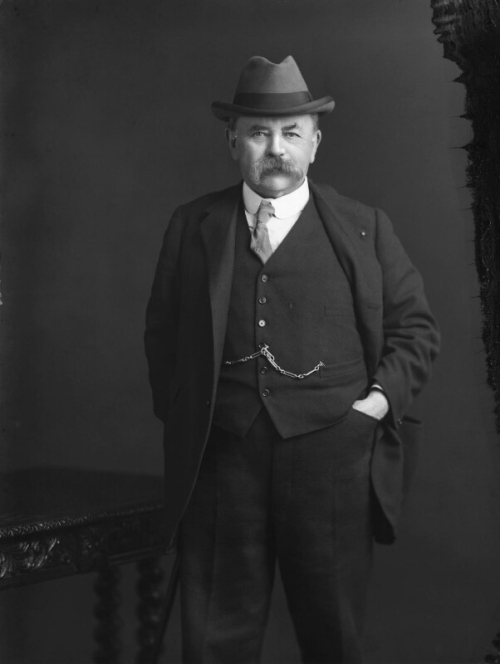 This combination of disappointed ideals and the thankless task of the translator emerge in the preface to the first English translation of Rosmersholm (London, 1889; 11755.e.13.) by the playwright, poet and musician, Louis Napoleon Parker. Parker writes how Ibsen was slowly becoming known to English audiences and, regarding his translation, ‘It claims only one merit: it is done from the original, and it is done as literally as my limited skill in juggling words would permit. An ideal translation is, like other ideals, monstrous rare of attainment. This is not an ideal translation; but that it is faithful I will pledge the word of one who has hitherto been considered indifferent honest.’ In his autobiography, Parker mentions an ‘obsession’ with Rosmersholm, ‘the only useful lesson in playwriting I ever had’. After first translating from an early German version, probably Marie von Borch’s (Berlin, 1887; 11755.c.2.), he returned to the original, feeling ‘instinctively that there were slips and lacunæ’ in the German. 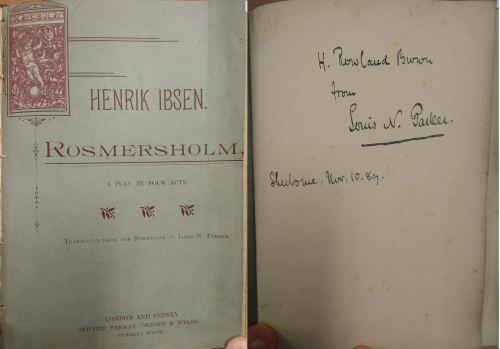 The Ibsen Society of America see the first translations, including presumably Parker’s Rosmersholm, as being particularly faithful but also outdated: ‘older literary translations can impede meaning as much as they preserve it, as one soon discovers when struggling through any of the arch British-Victorian translations’. A couple of the tricky motifs to transmit into English, according to Toril Moi, are the verbs svælge (‘swallow’) and kvæle (‘strangle’). For Moi, these verbs ‘evoke ideas of forced or silenced expression’ in a play about the struggle to connect through language and the actual abyss between Rosmer and Rebecca, as well as between Rosmer and the outside world. These verbs are strange to a Norwegian reader in their contexts and therefore stand out. Rendering into comprehensible English, translators often miss the specific motifs of swallowing and suffocation, which Moi holds central to her understanding of the play.

The end of Act 2 sees Rosmer lament the impossibility of his political project due in part to his deep guilt over his wife’s death. Moi has it:

ROSMER: I shall never conquer this – not completely. There will always be a lingering doubt. A question. I’ll never again be able to bask in (svælge i) that which makes life so wonderfully delightful to live.
REBECCA: [leaning over the back of his chair, more slowly] What kind of thing is it you mean, Rosmer?
ROSMER: [looking up at her] Quiet, joyous freedom from guilt.
REBECCA: [takes a step back] Yes. Freedom from guilt.

Moi cannot retain the idea of swallowing but opts for a phrase that keeps a bodily sense, of absorbing something. This is lost in Meyer’s and Poulton’s translations, which go with the verbs ‘enjoy’ and ‘losing the one joyful thing’. Parker and Archer settle for ‘revel in’, retaining at least the preposition and therefore some idea of physicality.

The scene takes a turn when Rosmer asks Rebecca to become his second wife, a proposal she rejects for no clear reasons at this stage. Rosmer’s plea is about shaking off the burden of the past in marriage, demanding, according to Moi’s version, to ‘let us strangle (kvæle) all memories in freedom, in pleasure, in passion’. Meyer writes, ‘let us lay all memories to rest in freedom, and joy, and love’, a significantly more peaceful image. Poulton offers a more violent image in the verb ‘drown’. However, closer to the original, Parker and Archer prefer the verb ‘stifle’, a motif of suffocation.

One last example that provides interesting comparison is the word vidnesbyrd, the ‘testimony’ or ‘proof’ Rosmer asks of Rebecca to restore his faith, essentially demanding that she takes her own life. Moi prefers to see this as ‘bearing witness’ because the concept is distinct from ‘proof’, as it ‘has to do with a person’, whereas ‘proof’ ‘often refers to things or facts’. This word isolates one translator among our selection. The very first translation, the one that was a product of an obsession with the most faithful rendering, Louis Napoleon Parker’s work is the only version not to use the word ‘proof’. He employs the awkward formulation, ‘Let me have a token!’ The word ‘token’ insists on a visible and tangible manifestation of something in a way that ‘proof’ does not quite manage.

As strange as it sounds in Parker’s rendering, perhaps Parker’s ‘token’ is a more accurate translation after all, and, if anything, his version helps to remind us of Ibsen’s own strange language.

Mark Lawson, ‘The Master Linguist: The Problem with Translating Ibsen’, The Guardian (29 October 2014)