Finliandets: the magazine of the Imperial Russian Finland Guard Regiment in Exile

The British Library holds a range of fascinating Russian-language periodicals published by Russian émigrés across the globe. The newspapers, magazines and journals published by the Russian community abroad during the interwar period is particularly rich.

A new wave of Russian emigration following the Revolutions of 1917 consisted in a great number of soldiers and civilians fleeing the destruction of the Civil War and famine in Russia. Many of these veterans of the Civil War later settled in the European centres of Russian émigré society such as Paris. Former soldiers remained deeply loyal to their regiments, publishing periodicals and newspapers which preserved the history of their regiment and reflected a strong sense of collective identity.

Finliandets, the magazine of the Finliandsky Guard Regiment, a Russian Imperial Guard infantry regiment founded in 1806, is an especially interesting example of such publications, though it is set apart from similar publications in the 1920s by its early manuscript form, hand-drawn illustrations and striking cover design. 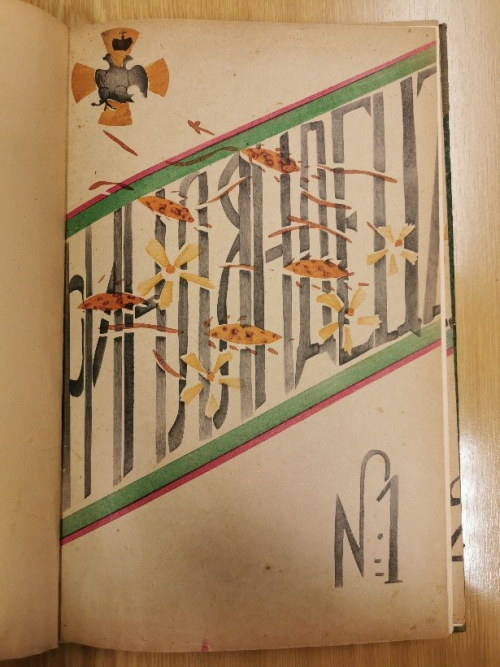 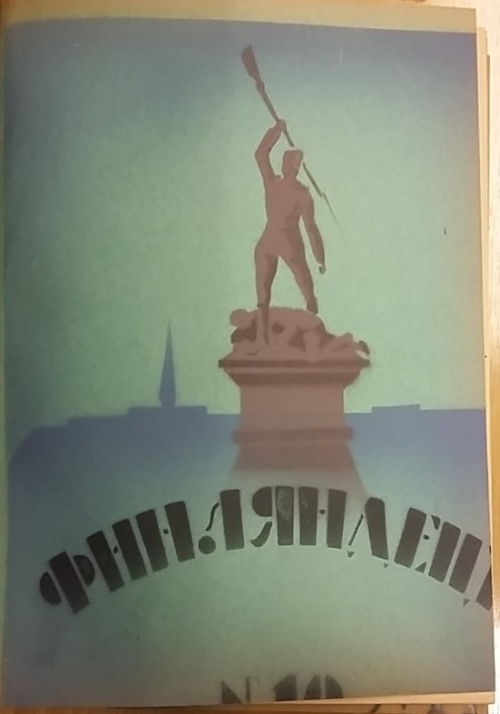 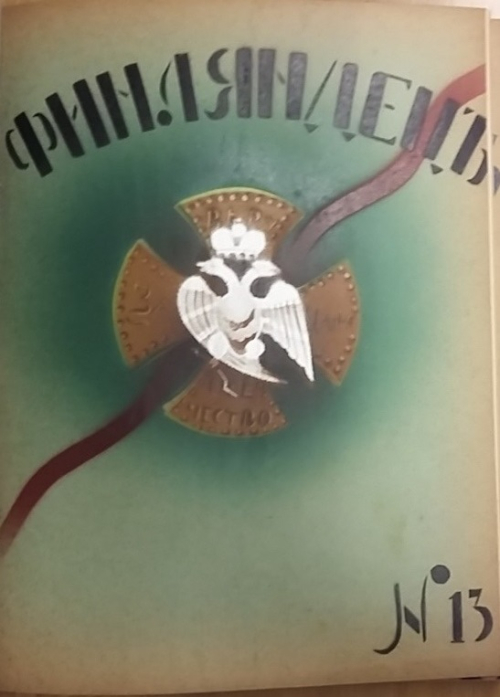 Finliandets sought to preserve the memory of the regiment’s achievements and to maintain the sense of community among its members abroad. Finliandets appeared in Paris between 1925 and 1972. The British Library holds issues 1-42 as well as a ‘Jubilee Issue’ celebrating the regiment’s 150th anniversary in 1956. The first issue of the magazine was handwritten by Baron Pavel Adolfovich Klodt von Jürgensburg (1867-1938), the director of the Association of the Finliandsky Guard Regiment in France. Although the typewritten script of subsequent copies is fading, the careful hand of this editor in later issues can still be seen correcting and adding to the text. This first manuscript issue envisages the magazine as a continuation of the regiment’s august service to Tsar and country, recalling the moment in which the regiment, on a routine manoeuvre, heard of the birth of its patron, the Tsarevich Alexei Nikolaevich, on 12 August 1904, the editor declares:

The memory of that which took place 21 years ago lives on in us today. In this love for the past we draw strength for the future. We will seek and rediscover that which has been forgotten, for the renewal of our esteemed regiment - a century-long, loyal service to Tsar and Fatherland. And, with the Lord’s help, our humble Finliandets too will serve this noble aim. 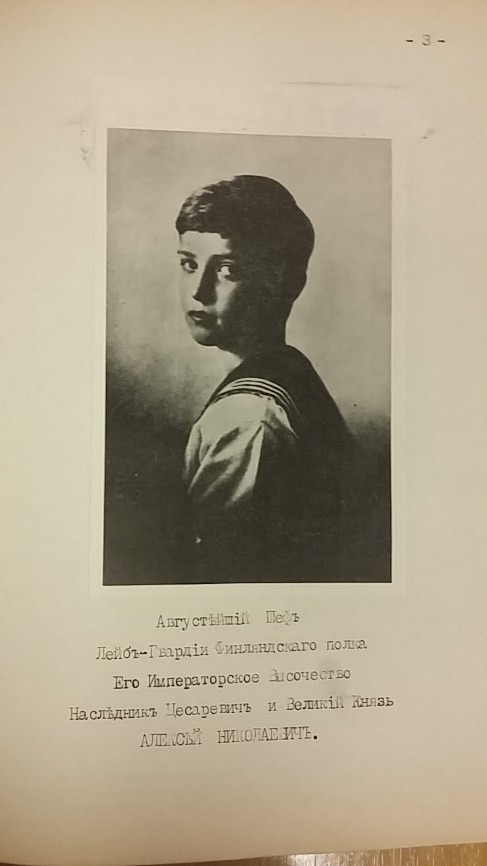 The magazine circulated in roughly 50 copies throughout its lifetime, and cost three francs. Half of the proceeds from sales went to the cost of producing the magazine and half to the organization itself.

In one appeal to members of the regiment to support an ailing comrade, Baron Klodt von Jürgensburg notes that the ‘Finliandsky Guard regiment’s incredible unity and solidarity has always set it apart’, appealing to members to ‘prove that this noble tradition is alive today’.

Finliandets reveals the importance of such publications for maintaining a sense of community within the distinct groups which characterized Russian émigré society. The magazine invites regiment members receiving the magazine to contribute to its production through verifying its contents, correcting and adding detailed information, and corresponding with Major General Baron Klodt von Jürgensburg at the Villa Marita, Avenue du Petit Juas, Cannes. The magazine often carried obituaries for veterans and the details of the organization’s administration, reflecting both an engaged and closely bound community abroad.

In 1956, a ‘Jubilee Issue’, more than double the length of the usual magazine, appeared between issues 33 and 34. The issue reflects on the regiment’s hope that this 150th anniversary could have been celebrated in their homeland. Despite the regiment’s continued exile, however, Colonel Aleksandr Likhosherstov, president of the Association of the Finliandsky Guard Regiment and a contributor to many émigré periodicals of the time, declares that ‘looking back over the history of our noble regiment, I am filled with a sense of pride at everything that the regiment has overcome during this period’. 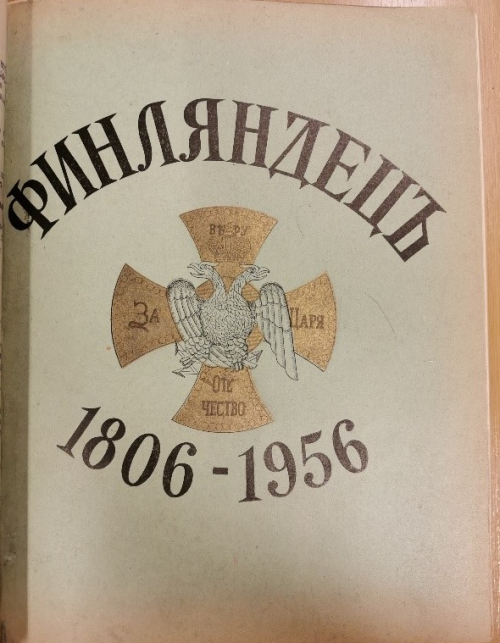 This Jubilee issue contains a detailed history of the Finliandsky Guard Regiment from its inception, with lists and photographs of members of the regiment abroad in 1956, hand-drawn maps of military manoeuvres and even a reproduction of the musical programme, menu and invitation to the regiment’s centenary celebration, which took place in 1906. This five-volume series of bound magazines reflects the desire of former regiment to document and preserve its history. 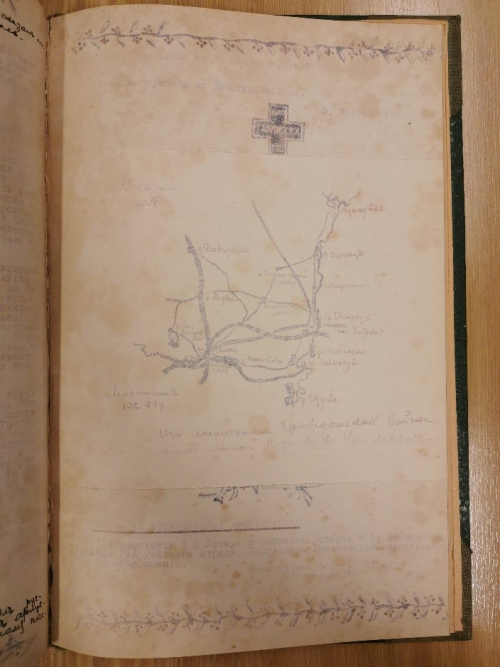 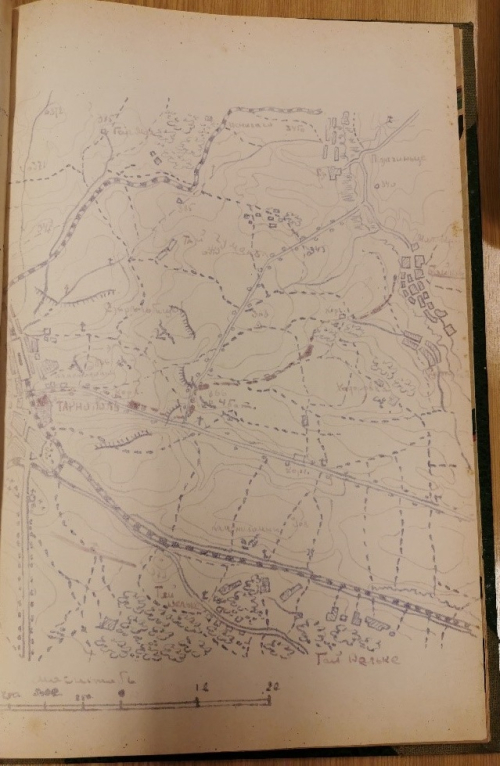 An inscription in the first bound volume attests to the continued importance of this tradition into the late twentieth century. 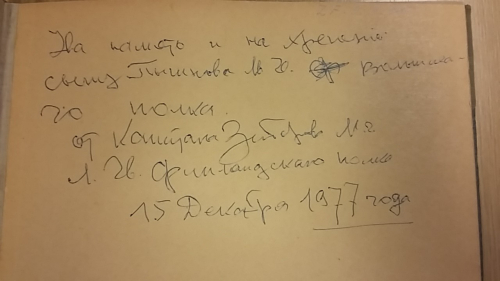 Inscription in the first bound volume of Finliandets (issues 1-7)

The inscription may be roughly translated as: ‘For the son of Pyshkov, of the Volynsky Guard Regiment, to keep the memory alive, from Captain Zaitsev, Finliandsky Guard Regiment. 15 December 1977’

Finliandets is an important source of information on the history of the Russian regiments abroad, belonging as much to a narrative of Russian emigration in the twentieth century as to a history migrant groups in France. It also attests to the strength of the identity of Russian émigré groups, such as the Finliandsky Guard regiment, within the broad and diverse 20th-century Russian émigré community.