Today marks the birthday of the Russian Futurist poet Vladimir Mayakovsky. To celebrate, we’ve dug into the history behind our edition of his poem Pro eto. Ei i mne (‘About This. To Her and to Me’). Completed in early 1923, Pro eto is a lyric love poem dedicated to the poet’s lover Lilya Brik, a writer, actor, artist and the wife of his publisher, Osip Brik, following a two-month separation. Their relationship was tumultuous to say the least, and the poem expresses Mayakovsky’s feelings of jealousy and emotional insecurities. It also has a political slant and can be viewed as ‘a reflection on life in conditions of revolutionary transformation’ (Day, 328). 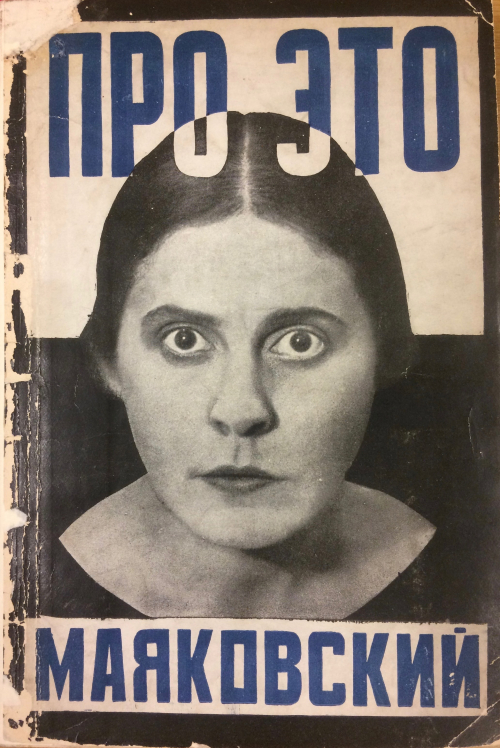 Pro eto was initially published in LEF, the journal of Levy Front Iskusstv (‘Left Front of the Arts’), an association of avant-garde writers, photographers, critics and designers, in March 1923. Shortly after, it appeared as a separate edition and was accompanied by photomontages (often featuring Mayakovsky and Lilya) by the artist and central figure in Russian Constructivism Aleksandr Rodchenko. The image of the telephone features throughout and can be viewed as a metaphor for their separation and the complexity of their relationship. The cover also features a striking shot of Lilya’s face with staring eyes. 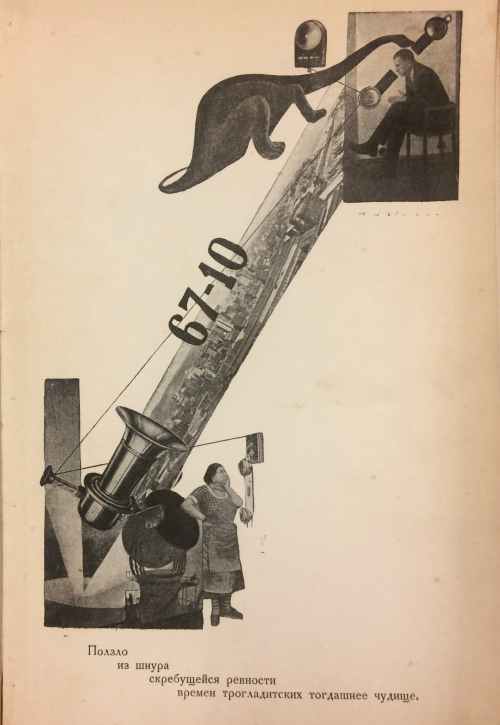 Page from Mayakovsky’s Pro eto with photomontage by Rodchenko 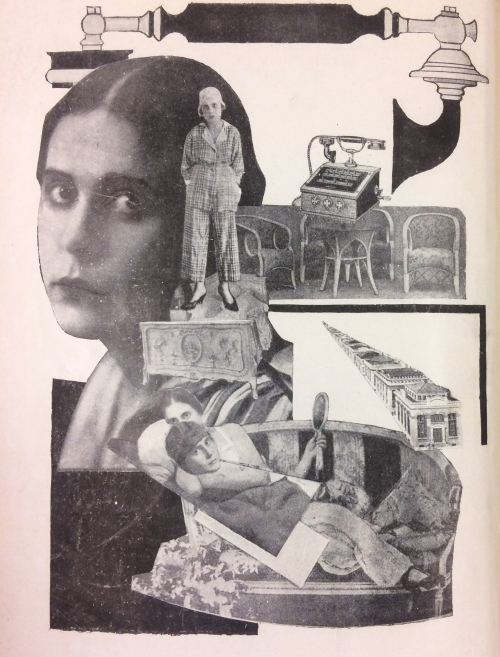 The edition held by the British Library was dedicated to Aleksandr Halpern, a Russian politician and lawyer, by Lilya Brik in Paris in 1924 (both Lilya and Mayakovsky spent time in Paris during this period). Halpern, who served as Kerensky’s private secretary in 1917, left Russia after the October Revolution, living first Paris and then Britain. From 1925 he was married to Salomea Andronikova, a Georgian princess who was an influential figure in literary and artistic circles in pre-revolutionary St Petersburg and later in emigration in Paris and Britain. During the Second World War Halpern allegedly worked as an MI6 agent in America as part of the British Government Mission. He returned to Britain after the war, where he counted Isaiah Berlin among his acquaintances, and died in 1956. The British Museum Library acquired this copy of Mayakovsky’s poem from Halpern’s Russian collection in 1958, along with a number of other works including the 1923 book Lidantiu faram (‘Lidantiu as a Beacon’; C.145.b.15. and Mic.F.224) by Iliazd (Il'ia Zdanevich) and Naum Granovskii (which warrants a separate blog post!). While Pro eto is written from Mayakovsky’s perspective, it provides an important insight into the complicated relationship between the pair and Lilya’s influence on his work. So much so, that the Barbican Art Gallery borrowed the British Library’s copy for their recent exhibition ‘Modern Couples: Art, Intimacy and the Avant-garde’.