When moderation went out of the window: the First Defenestration of Prague

Last year saw commemorations of the turbulent events of 1618, when the abrupt ejection of the Imperial councillors Martinitz and Slawata and their secretary from the windows of Prague Castle led to the outbreak of the Thirty Years War. However, in Britain it is not so widely known that this was not the first incident of this kind, although the First Defenestration of Prague had much closer links with England. Despite the fact that Elizabeth, the ‘Winter Queen’ of Bohemia, and her husband Frederick, the former Elector Palatine, were his own daughter and son-in-law, the timorous James I of England refrained from sending help when they and their growing family were driven out of Prague following the 1618 Defenestration. Afraid of jeopardizing relations with both Catholic and Protestant powers in Europe, he remained aloof, and the only Englishmen to become directly involved in the conflict were those who enlisted on either side as mercenaries.

Just under two centuries before, though, the equally fateful occurrences of 30 July 1419 stemmed directly from an English source which decisively influenced Bohemian politics. On the death of the King of Bohemia and Holy Roman Emperor Charles IV in 1378, his territories were divided between his sons. The new king, Václav IV, had to cope not only with the rivalry of his younger brothers Jošt, Margrave of Moravia, and Zikmund, who would succeed him, but with discontent among the nobility and increasing urban poverty and social unrest. This led to the eruption of civil strife in which minor nobility and Hussite preachers, intent on reform, opposed Zikmund and his Catholic supporters. As Prague’s status as a centre of culture and learning declined, the city’s German students decamped in 1409 to found a new university at Leipzig as Zikmund and the Council of Constance urged the young king to extirpate heretical elements within Prague’s university and churches. 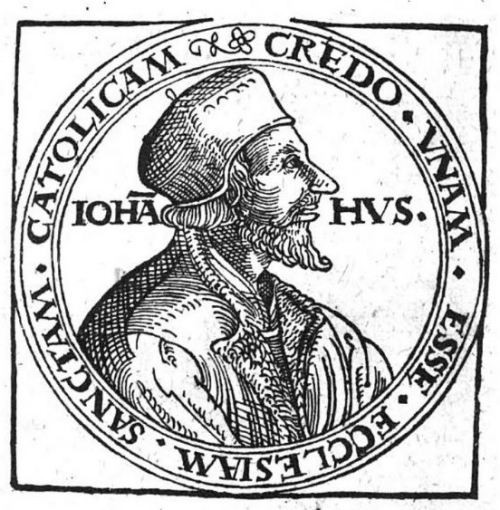 The followers of Jan Hus were notable for demanding that Holy Communion should be administered to the congregation sub utraque specie – allowing both people and clergy to partake of the chalice as well as consecrated bread. In other respects, too, they swerved dangerously from Catholic doctrine, not least in their zeal to make the Holy Scriptures available in the vernacular so that the laity could read them. Here they were drawing on the ideas of the English theologian John Wycliffe who attacked the Papacy, monastic orders and transubstantiation, and inspired the translation of the Bible into English. He shared a patron, John of Gaunt, with Chaucer at the time when Charles IV’s daughter Anne of Bohemia was queen of England, having married Richard II in 1381. Bohemian scholars who sympathized with Wycliffe and his Lollard followers came to Oxford, where Wycliffe had been a doctor of divinity, to copy his texts and take them back to Bohemia.

It was not only male academics who seized eagerly on these writings. An anonymous poem entitled Viklefice (‘The Wycliffite Woman’), dating from the early 15th century, describes in satirical tones how a female follower of Wycliffe lures an innocent young squire to her home as night approaches, ostensibly to teach him the true faith, but in fact plotting to seduce him. Despite its misogynistic character, the poem indicates a genuine sense of alarm about the capacity of women to read and interpret the Bible without the intervention of the clergy – not least because certain Lollards had already suggested that women too might become priests.

The execution of Jan Hus in Constance following a show trial in 1415 unleashed a revolt which the troops of the Emperor Zikmund failed to suppress, leading to the establishment of an independent Hussite church in the centre of Catholic Europe. In a desperate attempt at appeasement, Václav handed over St. Stephen’s Church, an important centre of the Hussite movement, to the Catholics. Cover of Miloš Václav Kratochvíl, Jan Želivský (Prague, 1953: 10798.e.13), part of a series of books devoted to ‘heroes of wars and revolution’

Churches were scrubbed, choirboys made to repent if they had served the Hussites, and dying Hussites were deprived of extreme unction unless they recanted. In retaliation a mob headed by the radical preacher Jan Želivský burst into the New Town Hall on 30 July 1419. They had just heard Želivský preach a rousing sermon on a text from the Book of Revelation demanding the punishment of the unjust. Raising the monstrance containing the Host high in his hands, he led the procession along what is now Wenceslas Square to rout the Catholic priest celebrating mass in St. Stephen’s. After a brief service of their own, they called for the release of prisoners arrested during the recent street fighting. One report claims that while they were parleying with the councillors, the latter threw stones, one of which hit Želivský’s monstrance. Among those present in the crowd was Jan Žižka, who would later command the Hussite army. The furious attackers stormed the tower and hurled seven members of the town council, including the burgomaster and the judge, to their deaths. A force of 300 cavalry despatched from Hradčany retreated, outnumbered by the Hussites, who rapidly elected four magistrates and invested them with the insignia taken from the bodies of the councillors. 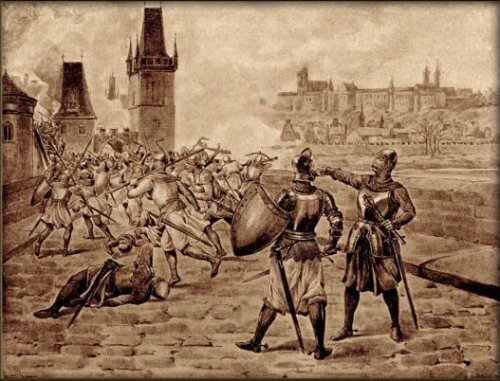 The First Defenestration of Prague as depicted by Hugo Schüllinger. Source: Wikimedia Commons

The king’s immediate reaction was to threaten to kill all the Hussites, despite his councillors’ urging him to forgive them. However, just over two weeks later he suffered symptoms suggesting a stroke or heart attack, and died on 16 August. The next day mobs were roaming the streets, breaking into churches and monasteries and destroying their treasure before burning down the brothels in the Jewish quarter. As violence escalated during the autumn, much of Malá Strana was destroyed in a battle between royalists and radicals on 4-6 November 1419. 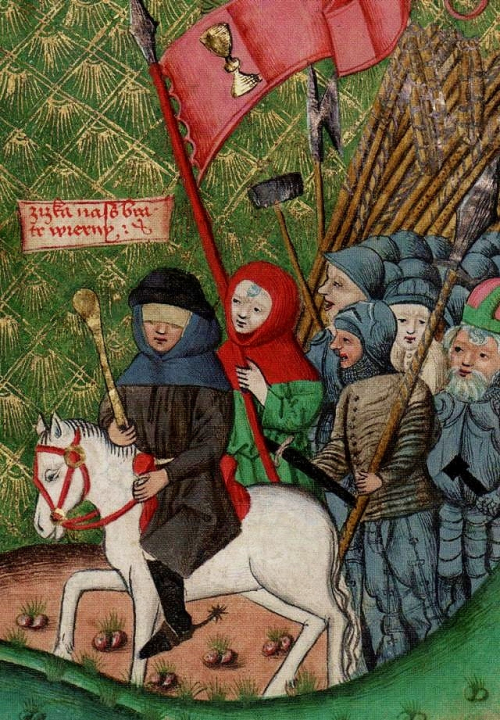 Jan Žizka at the head of the Hussite army, from the Jenský codex (late 15th century) in the National Library, Prague (Image from Wikimedia Commons)

The Hussite Wars raged until 1436. By this time the Hussites had split into the Utraquists and the more puritanical Táborites, while much of Bohemia had been ravaged in a way presaging the devastation of the Thirty Years War. Although on a lesser scale, these events left permanent scars on the country and eerily foreshadowed those which followed almost two centuries later.