A Letter to Panizzi with Echoes and Sparks

In May 1921 staff at the British Museum Library must have been rather surprised to receive a letter addressed to Sir Anthony Panizzi, the Museum’s famous 19th-century Principal Librarian, who had been dead for some 42 years. The letter was from Victor Patzovsky, a former officer in the Austrian army, who had been stationed at the Sigmundsherberg Prisoner of War camp in north-eastern Austria during the First World War, and it accompanied a parcel containing issues of newspapers produced by the Italian prisoners in the camp.

Such newspapers were produced in many internment and prisoner-of-war camps in the First and Second World Wars. They served various purposes: to communicate the latest news from the camp and the wider world, to publicise sporting and cultural societies and events organised by the prisoners, to alleviate boredom and frustration, to share experiences, memories and jokes, and to maintain a common cultural identity while in enemy captivity.

These things were particularly important in a camp like Sigmundsherberg where conditions were poor and prisoners particularly likely to succumb to the ‘barbed-wire disease’ that accompanied long, difficult and tedious incarceration. The camp had originally housed Russian prisoners, but after Italy entered the war against her former Austrian and German allies most of the Russians were moved out, and by the autumn of 1916 some 56,000 Italians were interned there. Since this was a far greater number than the camp had been built for, overcrowding was a constant problem, exacerbated by sickness, and shortages of food and fuel, creating miserable conditions for the prisoners.

In his letter Patzovsky writes of the prisoners’ ‘sad lot’ and says that he was ‘a real friend’ to them, enclosing testimonials from some of them to support this claim. He goes on to explain that he has now fallen on hard times himself, and is hoping to sell the newspapers to the Library to raise some money. He must have heard of Panizzi and, not realising that he was long dead, thought that an Italian-born librarian would have a particular interest in the newpapers and sympathy with a man who had tried to help Italians in distress. The letter was passed on to A.W. Pollard, one of Panizzi’s successors as Keeper of Printed Books, and a pencilled note on the first page, signed with Pollard’s initials, shows that the Library offered £2 for the collection. Clearly Patzovsky was content with this as the newspapers remain in the British Library today, although the testimonials were presumably returned to Patzovsky as he requested. 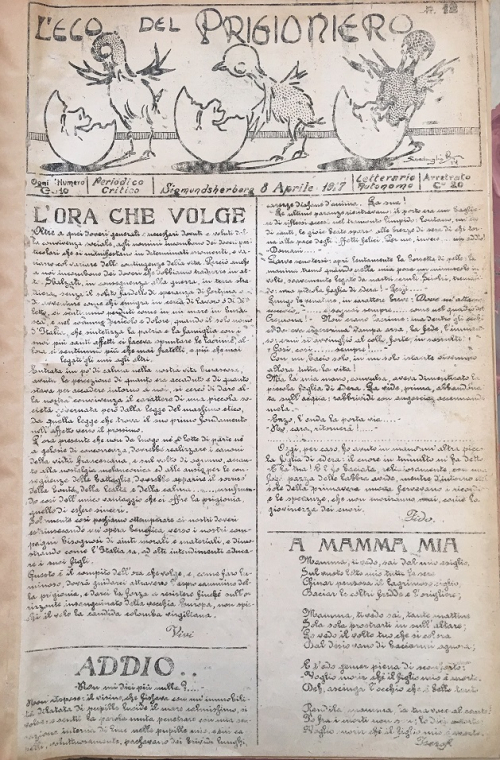 The run of newspapers is far from complete. As Patzovsky explains, ‘the few copies that were printed went from hand to hand among the thousands of Italians until the paper fell to pieces.’ The earliest in the collection is no. 3 of the weekly L’Eco del Prigioniero (‘The Prisoner’s Echo’), dated 21 January 1917. L’Eco del Prigioniero was reproduced from manuscript using a machine known as an opalograph and each issue has a different illustrated masthead.

Some examples of mastheads from L’Eco del Prigioniero. Two  bear a label addressed to Patzovsky, suggesting that they were his subscription copies

The first editor was an A. Gori, but from no. 15 (6 May 1917) the role was taken over by Guido Monaldi. The content generally includes news and comment, essays poems and stories, and reports of camp activities, while a monthly supplement, L’Eco Umoristico/L’Eco Caricaturista, is devoted to jokes and cartoons. 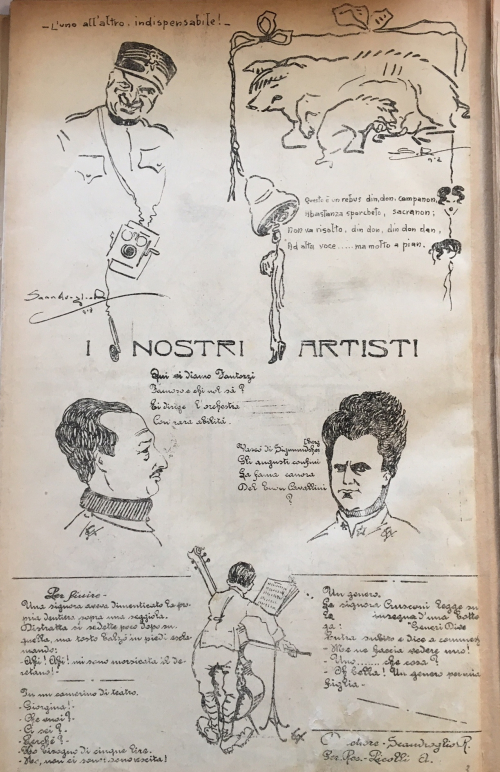 In August 1917 L’Eco del Prigioniero became La Scintilla (‘The Spark’), but Monaldi remained as editor, the content was much the same, and there was still a humorous supplement, La Scintilla Caricaturista. Initially the same form of reproduction from manuscript was also used, but the difficulty of obtaining the chemicals needed for the process and the low quality of the available supplies made it impossible to keep up with the demand for copies and to maintain the quality of the reproduction. 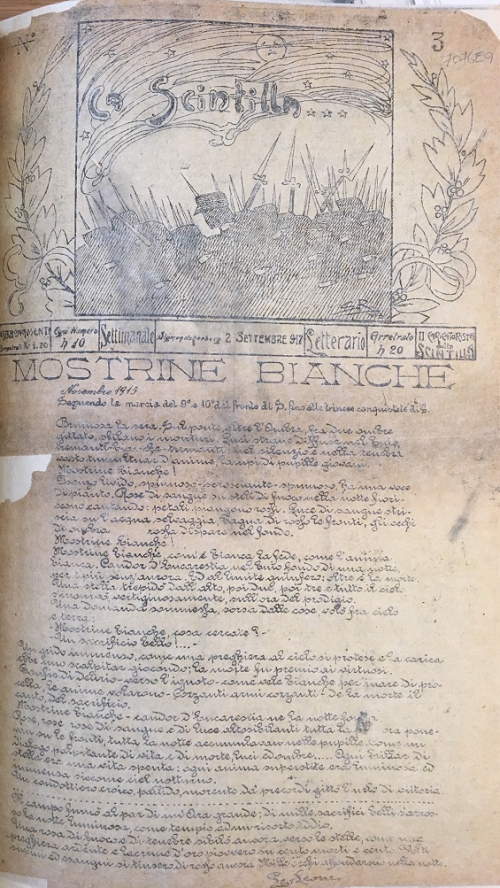 By the beginning of November Monaldi and his team had succeeded in acquiring a proper printing press, and the remaining issues are all printed, losing somewhat in visual charm and variety but gaining greatly in legibility. A new and permanent masthead image soon appeared, with the image of a goddess-like figure striking sparks. The first printed issue of La Scintilla (4 November 1917), showing the kind of wear and tear described by Patzovsky

Somewhat confusingly, the series numeration restarts at 1 from the first printed issue; the last issue which we hold is no. 15 in this numeration (7 April 1918), although La Scintilla is recorded as having run until August 1918.

Masthead for the printed issues of La Scintilla

Incomplete as our holdings are, we must be grateful to Patzovsky for offering them to the Library and to Pollard for being willing to buy them from him.