Learning to read Cyrillic from 13th century Novgorod to the USSR

We do not know much about how children learned to read and write Slavonic languages in Cyrillic script in the 11th-15th centuries. The most popular teaching method was learning Psalms and copying manuscripts. Near the Russian city of Novgorod, among birch bark manuscripts, archaeologists found a tablet with a wax surface for writing on the right and the Cyrillic alphabet carved on the left. 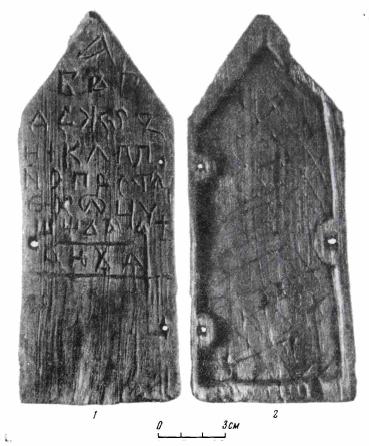 It definitely looks like a school exercise book, but who keeps their jotters? Children learning to read Cyrillic did not, and nor did they even care much about their textbooks, passing them from one to another until the books disintegrated. That is why only two copies of the first Eastern Slavonic printed primer, published in Lviv by Ivan Fedorov in 1574, are known. The copy held at the British Library has been digitised and is freely available. 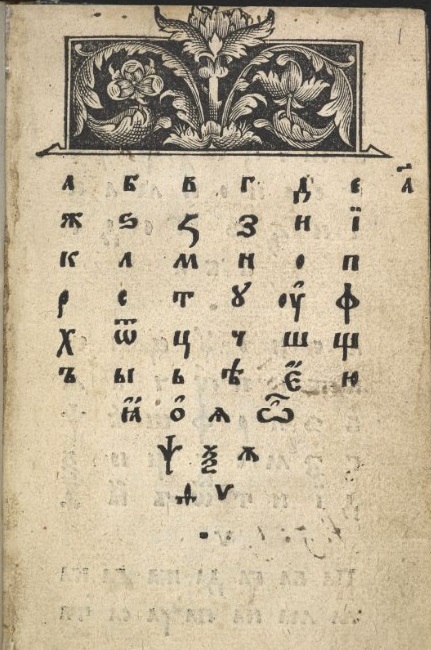 It starts with listing Cyrillic letters three times: in the direct and reverse order, and in columns rather than lines. Then the book suggests that learners could put together consonants and vowels. As Russian is primarily a phonetic language, where written symbols directly correspond to spoken sounds, it is quite an easy exercise. Try it yourself: M+A=MA, B+A=BA, etc. Elementary grammar and texts for reading were also included.

Such books were called Azbuka, for the first two letters of the Cyrillic alphabet: A – was called Az and B – Buki. Another name for them was Bukvar’, from the word ‘bukva’ – letter. Soon, educators started separating such alphabet books from more advanced grammars. Also, the power of images in teaching and learning was recognised and more educators started to include pictures in their textbooks.

The most remarkable example of an illustrated primer was created by Karion Istomin, one of the first Muscovite enlighteners, who was editor of the Moscow Printing House, court poet and tutor to the royal children. The book was published in Moscow in 1694, but previously two manuscript copies had been presented to the royals for Peter the Great’s son and two young nieces.

The book opens with a short introduction illustrated by an engraving showing Christ teaching schoolchildren. Each page is devoted to one letter, which is drawn symbolically as a picture, and then in various other ways – print and shorthand. Istomin also wrote short poems that would help learners remember the letter, and included images of objects and animals whose names started with that letter. The book was too complex to be printed with moveable type and therefore was engraved by Leontii Bunin. He seems to have worked on it for about two years, between 1692 and 1694. 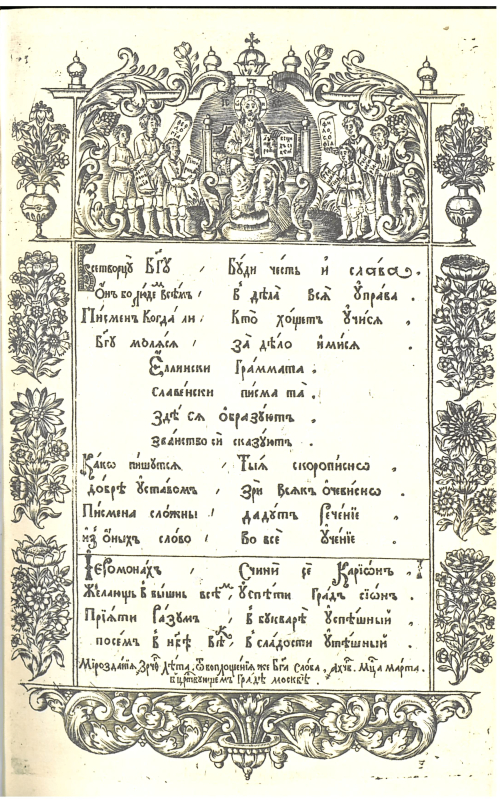 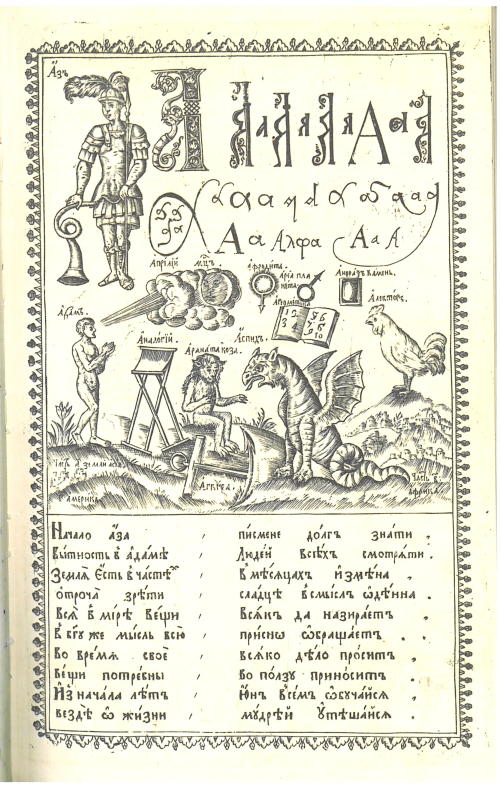 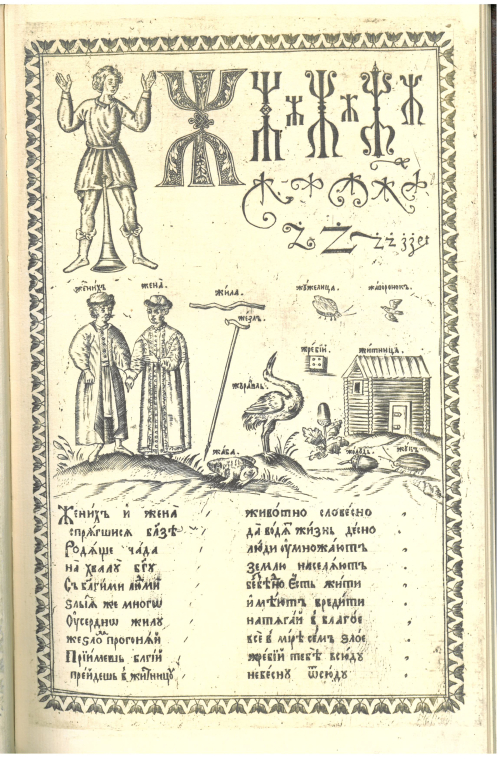 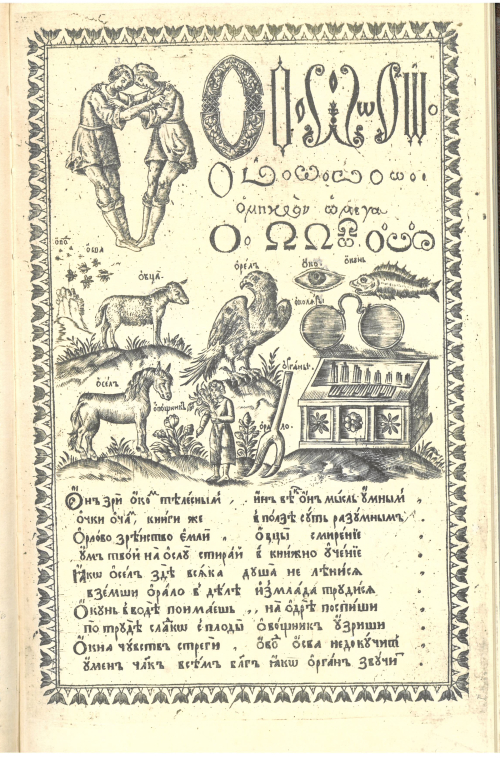 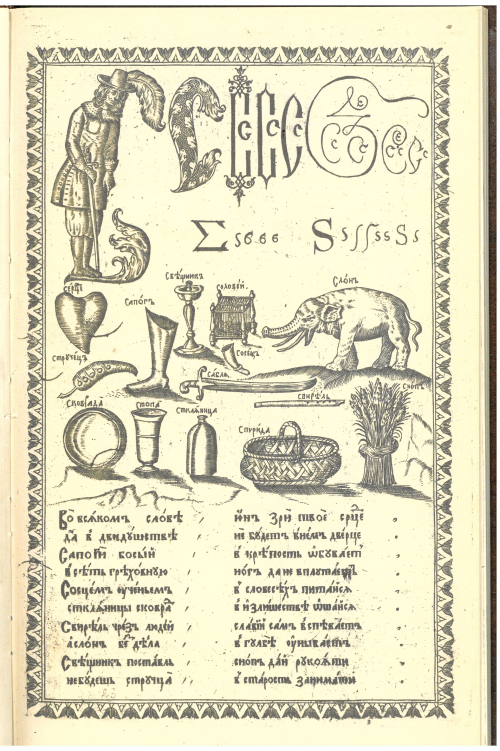 Although most scholars agree that so many variations in the letter shapes could confuse rather than help learners, this primer set up a tradition of illustrated textbooks for learners.

By the beginning of the 19th century, textbooks and learning materials were in demand by a network of various educational establishments and private tutors. Not only royal children could get books with pictures (although of course not so lavishly printed!). An Azbuka published in 1818 for public schools, was called Dragotsennyi podarok detiam (‘A Precious Present for Children’). It also introduced the alphabet in various types and shorthand, illustrating it with pictures, elementary reading exercises and texts for further reading, such as moral instructions and prayers.

As part of our Google Books project the British Library’s copy of the fourth edition of Dragotsennyi podarok detiam published without changes from the 1818 edition was digitised. 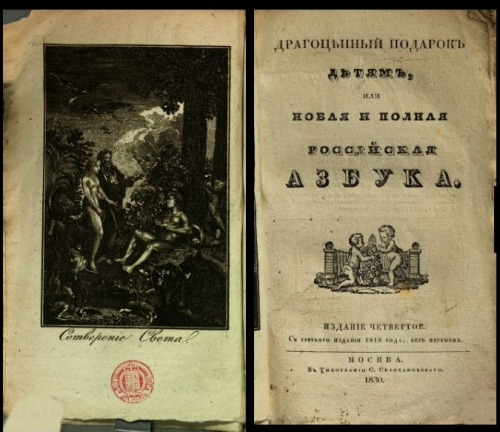 The cheap popular editions that mushroomed at the end of the 19th century could not afford many pictures, but at least tried to include some under colourful and attractive paper covers. 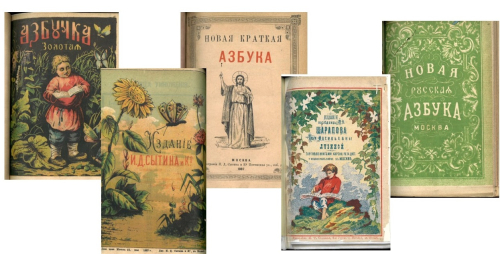 Most of the reading materials were still prayers, adaptations from the Gospels, and some simple statements and proverbs. Leo Tolstoy, who established a school for village children, was also concerned with education. He wrote his own Azbuka, where he aimed to offer exercises suitable for any learning method, including the ‘word method’ (reading not syllable by syllable, but memorising whole words), which, as he wrote in the introduction, was popular in England and America. It is interesting to note that Tolstoy thought pictures to be a luxury feature that could only distract pupils. 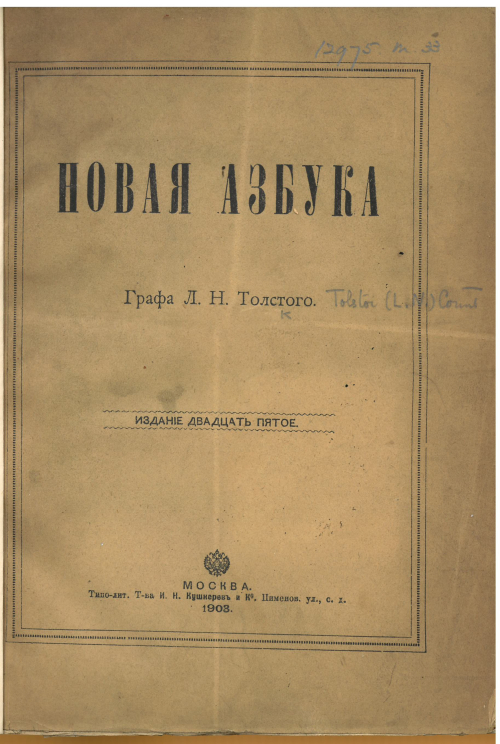 In the new Soviet state this idea of Tolstoy’s was definitely not accepted. Primers illustrated with new communist propaganda became quite popular and were issued for adult learners. In 1921 Dmitrii Moor illustrated an Alphabet for a Red Army Soldier where he applied the same principle as in standard textbooks – introducing letters with a two-line verse and a picture. For example, letter ‘B’ showed a miserable bourgeois, begging for mercy. 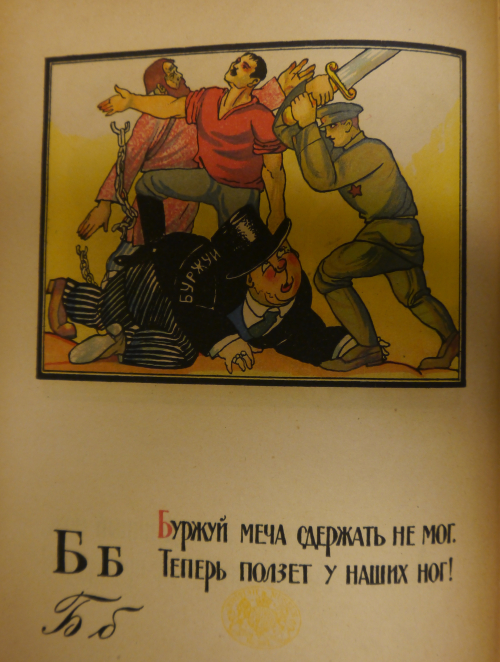 The campaign “Down with illiteracy!”, which started almost immediately after the October revolution in 1917, also required new textbooks, where learners’ first texts would be citations from Lenin and Trotsky instead of prayers. 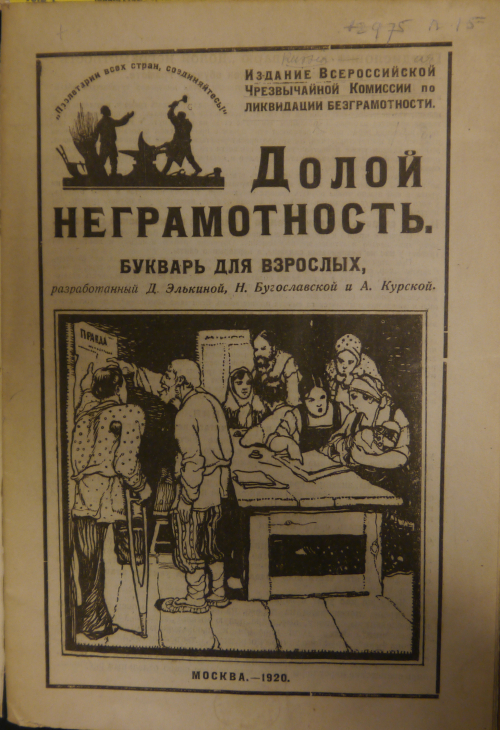 The Soviet primary school textbook had Lenin and a map of the USSR as the first pictures that children would see when they started learning to read and write. This is what the last Soviet edition of primer looked like; it was reproduced in more or less the same way for decades, so I also recognise the cover as my first schoolbook. 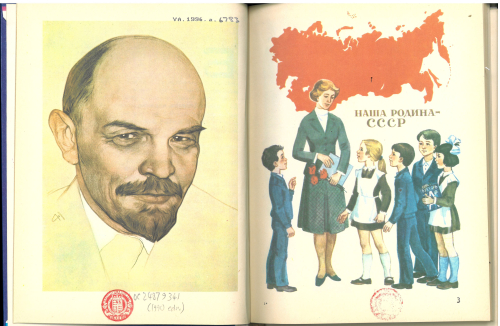 Meanwhile, Russian-speaking children abroad also needed primers. Their parents, who had fled the Soviet regime, wanted them to keep their heritage language. It is interesting to see how old fashioned the YMCA-Press edition of 1957 looks. Children born in the early 1950s were introduced to reading through pictures of a 10 kopeks coin of 1911, a samovar, a horse-drawn carriage, and birch-bark shoes. As well as modern Russian, émigré children were also supposed to learn Church Slavonic so that they could read Christian Orthodox books. 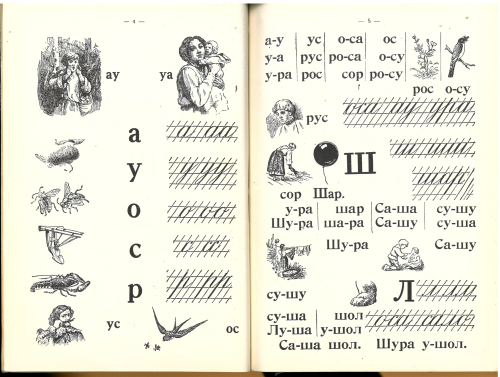 To learn more about reading and writing in various countries, languages, alphabets, and societies, visit our exhibition Writing: Making Your Mark which is still open until 27th August.

E. Rogatchevskaia, ‘“A Beautiful, Tremendous Russian Book, and Other Things Too”: An Overview of Rare Russian Books from the Diaghilev-Lifar Collection in the British Library’, Canadian-American Slavic Studies, Volume 51 (2017) Issue 2-3, 376-397.

Ivan the Terrible, primers, ballet and the joys of curatorship