Where to start with the eccentric French poet Raymond Roussel? He was born into fabulous wealth, which he used to indulge his many idiosyncrasies. He threw lavish banquets just for himself. He more or less invented the modern electrified caravan, in which he travelled the world. Oh, and there’s a childhood photograph of him astride a swan. 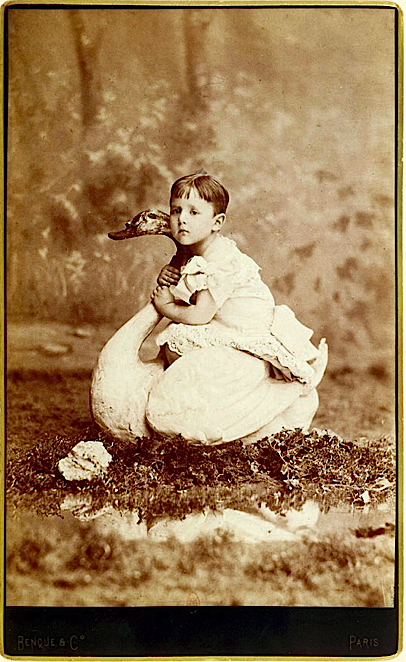 He also produced a book with peculiar, unturnable pages, called Nouvelles Impressions d’Afrique. There’s a first edition in the British Library’s collections, and it has quite a story attached to it. You can listen to a podcast I made about it here, featuring Dr Dennis Duncan of University College London, and Dr Sophie Defrance, Curator of Romance Collections at the British Library.

Nouvelles Impressions is a long poem written in rhyming couplets, which Roussel published in 1932 after spending over a decade writing it. Convinced it was a masterpiece, he wanted to it to be his lasting literary monument. The problem was that it wasn’t very monumental in length and so, possibly to turn it into a longer, more impressive looking tome, he decided to include some illustrations. But here’s where it starts to get weird: Roussel hired an illustrator using a private detective agency, keeping his own identity a secret and providing only a series of captions or one-sentence instructions. And so the artist, Henri Zo, produced a set of line drawings without ever seeing the actual poem, or even knowing whose book he was illustrating. What’s even weirder is that Roussel then instructed his printer to produce the book in such a way that the illustrations would be partially concealed, hidden in the folds of uncut pages.

Books with uncut (or ‘unopened’) pages used to be very common. They were a by-product of the way books were produced in the era before industrial printing. Handpress production involved printing several pages at a time on a single larger sheet, which was then folded, usually into quarters or eighths, depending on the format and size of the volume. When these folded sheets were then stitched together into a book, some of the pages would still be joined together at the top or along the fore-edge. (Try this with a sheet of paper and you’ll see what I mean). Often the first thing you would need to do as a reader is to slice open the pages in order to read.

Roussel turned this quirk of book production into a feature of his Nouvelles Impressions d’Afrique. He made sure that the text and illustrations appeared on alternate leaves, and whereas the text is easily readable by turning the pages conventionally, the images could be seen only with difficulty, by prising apart two pages which are joined at the top. He even seems to have included an instruction to readers in later editions not to slice the pages, but to leave them joined. There’s something not only awkward but quite voyeuristic and intimate about this mode of reading, as Dennis Duncan has observed.

Roussel’s text itself seems well aware of this, and one of the illustrations depicts a man who is reading in exactly this way, looking rather furtive as he prises apart the leaves of an uncut book. It creates a funny kind of regression, placing us in the same position as the man in the illustration, even as we look at him. 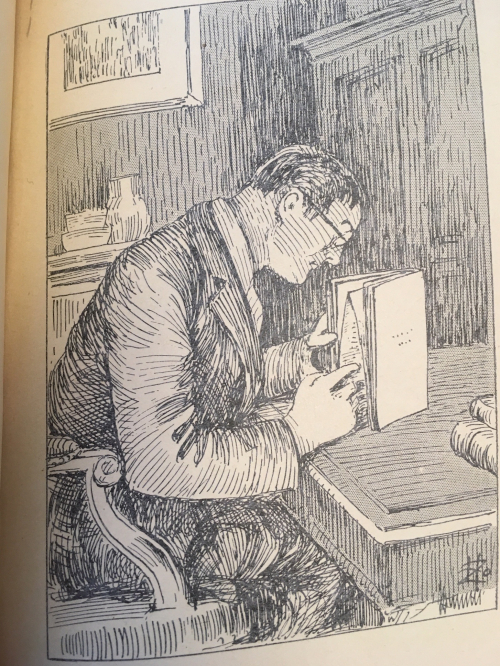 An illustration of the art of reading an unopened book, in Raymond Roussel’s Nouvelles impressions d’Afrique. (Paris, 1932) 11397.aaa.2.

Except that in this British Library copy, it doesn’t work in quite the way Roussel intended. He might have been meticulous in planning what the book would look like, and how readers would have to navigate it, but his plans were derailed once it was out in the world. At some point, possibly as late as 1983, the pages of this edition in the British Library were sliced open and disbound, so that they could be coated in a peculiar protective tissue layer that conservators were once fond of, in a process called lamination, or the ‘technique/process of manufacturing a material in multiple layers, so that the composite material achieves improved strength and stability’. Lamination was used to conserve very fragile or acid paper and was rather a common habit in libraries that cared about conservation from the 1950s to the early 1980s.

Not only were the pages of the British Library edition cut, but it was rebound wrongly, so that Roussel’s masterpiece was interrupted mid way through by the accidental inclusion of some publishers’ blurb and critical endorsements, including a glowing review of one of Roussel’s previous works, La poussière de soleils by the Daily Mail.

Pierre Bazantay’s study on Roussel’s aesthetics describes how this booklet, or “cahier” of praises to Roussel was prepared by his editor, Lemerre, in the 1930s (certainly at the request of Roussel himself) and inserted in all the re-editions of his works. For the modern reader, it is ever so slightly poignant to read these reviews, which were not always clearly laudatory, but were cut just the right amount to almost look so. As a point of comparison, the booklet was correctly inserted in a now digitised edition of another of Roussel’s works, Chiquenaude. 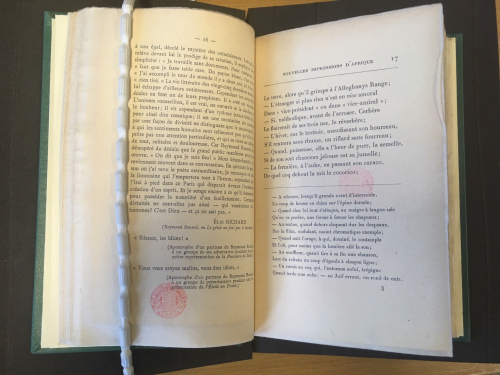 Poor old Roussel tried so hard to control how his poem would be encountered and read. But the British Library copy is testament to the fact that books just don’t work like that. How they are preserved depends on the vagaries of conservators, collectors and readers. Subsequent publishers have also largely ignored his original design, taking all kinds of liberties with the layout of Nouvelles Impressions, and even bumping all the illustrations to end of the book. Laurent Busine’s study, Raymond Roussel: contemplator enim, described the composition process, Roussel’s relationship with his publisher, and reproduced and discussed the 59 images created by Zo. If you want to read the book as Roussel envisaged, you need to get hold of the 2004 English translation published by Atlas Press. It’s the only edition to scrupulously replicate its unopened pages and give you the original, peculiar reading experience. It even includes a stern warning note to its readers: ‘You are advised to cut only the pages containing the introduction, and to read it before deciding whether to cut the remaining pages’.