A ‘Colonial Anecdote’ in Translation: Jean-Baptiste Picquenard’s Adonis in Swedish

The Library has recently acquired Jean-Baptiste Picquenard’s first novel, Adonis, ou le bon nègre, anecdote coloniale, translated into Swedish by Sven Johan Collin in 1802 as Adonis, eller den förträfflige negern. It tells the story of the slave revolt on Saint-Domingue, what is now known as the Haitian Revolution, through a ‘colonial anecdote’ that follows the capture of the enlightened plantation owner d’Hérouville and his loyal slave Adonis by Biassou, the leader of the revolt. Victor Hugo was inspired to write his first novel Bug-Jargal (1826) after reading Adonis. 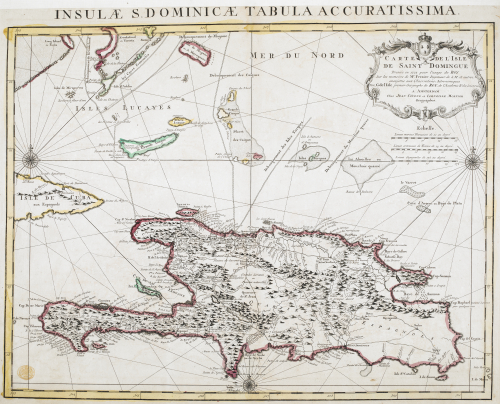 The book is an extremely rare copy of a work that was not translated into many languages. Swedish interest was not simply due to some residual francophilia around the Enlightenment but also due to the reading public’s own Caribbean imaginary, sparked by Sweden’s ownership of the island of Saint Barthèlmy since 1784. The copy once belonged to the library at Östanå Castle, which points to the ownership of once director of the Swedish East India Company, Simon Bernhard Hebbe. 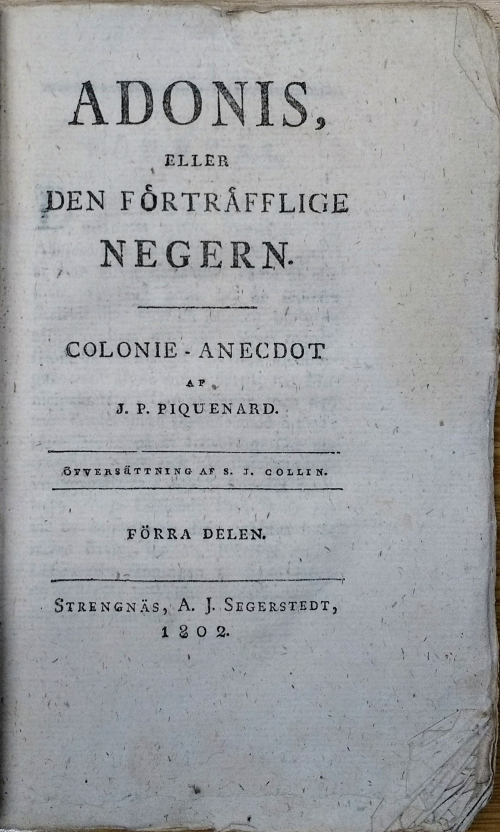 As Chris Bongie has discovered, Picquenard was intimately involved in ‘the revolutionary violence that accompanied the successful imposition of egalitarian principles in France’s most prosperous colony’. He was deputy secretary to the French Civil Commissioners Légér-Félicité Sonthonax and Étienne Polverel, who aimed to take over power from the white Saint-Domingue population on behalf of the new republican government. Picquenard voiced the revolutionary ideas of the commission in his newspaper L’Ami de l’Égalité, frequently defending the use of violence.

Yet, none of this is necessarily apparent when you read Adonis, which avows broad humanist principles that both support the abolition of slavery and admonish the violence that enabled it. The first paragraph sets out the position:

I will not start by deciding whether or not the sudden abolition of slavery in the French colonies has been of real benefit to humanity. It will be nice, undoubtedly, for the philosopher to see the fertile plains of Saint Domingue cultivated by free hands soon – but the terrible tremor that the Antilles felt in order to reach this happy outcome has caused the ruin of so many European families, and the deaths of many others, such that I would not dare even pronounce myself in favour of such principles without fear of being accused of injustice and inhumanity. 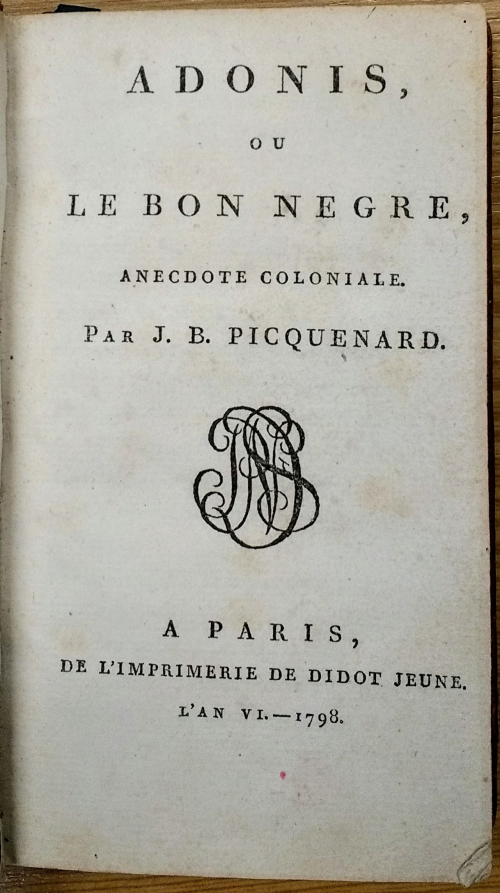 With the archival knowledge of Picquenard’s early engaged and violent writings on the island, Bongie can reread Adonis as not simply exemplary of the active forgetting of the Terror that typified the turn of the 19th century in France, but as an agonized site of friction between Terror and Enlightenment. Picquenard’s authorship demands that we read what has been ‘written over’, that is, ‘the entanglement of revolutionary violence and the humanist projects of Enlightenment’.

S. J. Collin’s translation stays faithful to the French original, in other words staying faithful to a certain ambivalence and infidelity in the authorial voice. It would be worth investigating the extent of French slave narratives – a significant genre in the slim period when France first temporarily abolished slavery (1792-1802) – translated into Swedish. Adonis is at the very least a curious book that reveals a shared anxiety between colonial powers.