Daniel Defoe’s Robinson Crusoe was first published 300 years ago this year and swiftly became popular both in Britain and beyond. As well as the numerous editions and translations that followed the original publication, there were also many adaptations of the story, particularly for younger readers.

One such was Joachim Heinrich Campe’s Robinson der Jüngere (1779-80). Campe was an educational theorist, teacher, author and publisher in the tradition of the German Enlightenment. Like Rousseau, he believed that Robinson Crusoe could teach children valuable lessons in self-sufficiency and independence, but he thought that Defoe’s text was too dense for young readers and lacking in clear moral instruction. His wanted his own version to correct these supposed defects. Certainly nobody could accuse Campe’s version of lacking in instruction, moral or otherwise. The book is presented as a series of conversations between a father, who tells the main story over a number of evenings, and his extended family and friends, who chip in with questions and comments. Some of these relate to practical matters such as geography, natural history and survival skills, while others are moral and philosophical ones relating to Robinson’s actions and beliefs, with no opportunity missed to inform the listeners what course of action is right.

Campe’s Robinson is the youngest and only surviving son of a Hamburg merchant. (Oddly, Robinson is the family’s surname and ‘Krusoe’ the protagonist’s forename; even the narraor admits ‘I don’t know why’, and ‘Krusoe Robinson’ is referred to by his surname for most of the book). Over-indulged by his parents and allowed to neglect his education, he boards a ship bound for England on a whim, and without telling anyone. After various misadventures he finds himself the only survivor of a shipwreck, washed up on a deserted island. Unlike Defoe’s hero, he is unable to salvage tools and supplies from the wreck, and has to create shelter and find food using only his hands and his wits. 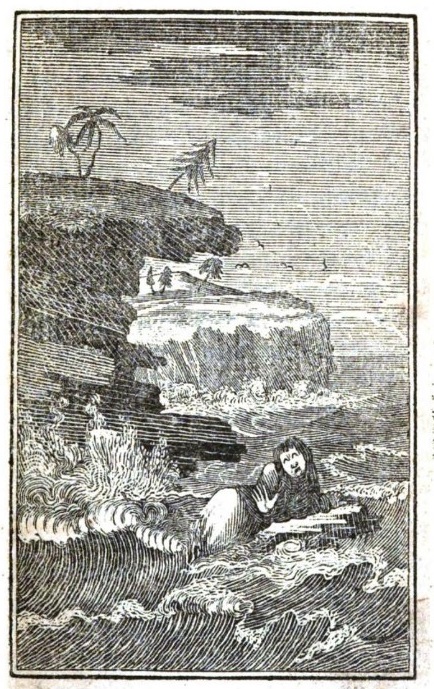 Robinson is washed ashore. Woodcut by John Bewick from The new Robinson Crusoe ... (London, 1811) Cup.403.a.26. an English translation made from  the first French translation of Campe’s text,

Only quite late on in the story does Robinson, now accompanied by Friday whom he has rescued as in Defoe’s version, find another wreck from which useful supplies can be taken. Eventually both Robinson and Friday are able to return to Hamburg, where they establish a carpentry workshop (having become ‘accustomed to the pleasures of manual labour’), become model citizens, and remain lifelong friends. 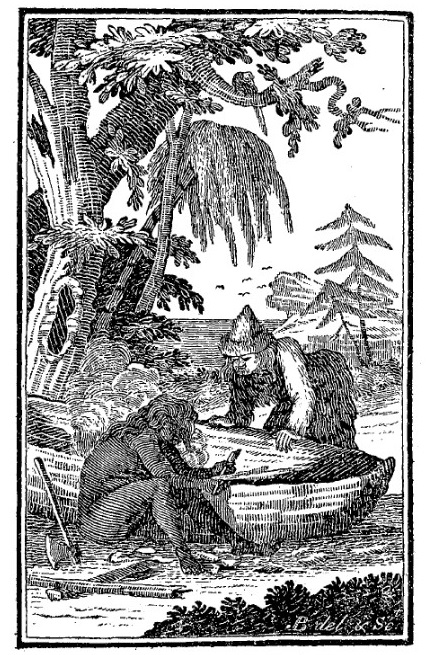 Robinson and Friday build a boat, woodcut from  The new Robinson Crusoe

Although the book wears its didacticism rather heavily for modern tastes, it was hugely successful in its time. The British Library’s collections give some idea of the wide range of translations that appeared in the century after its first publication. We have editions in English, French, Latin, Yiddish, Hungarian, Greek, Italian, Estonian, Polish, Swedish, Russian and Spanish. 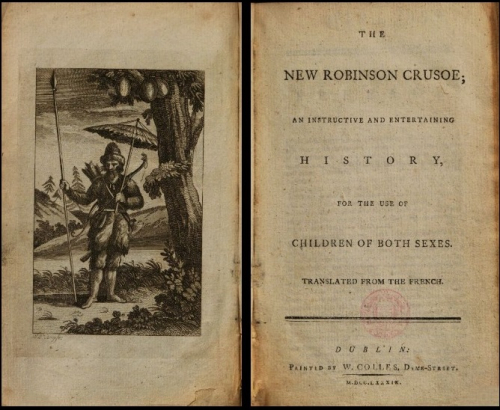 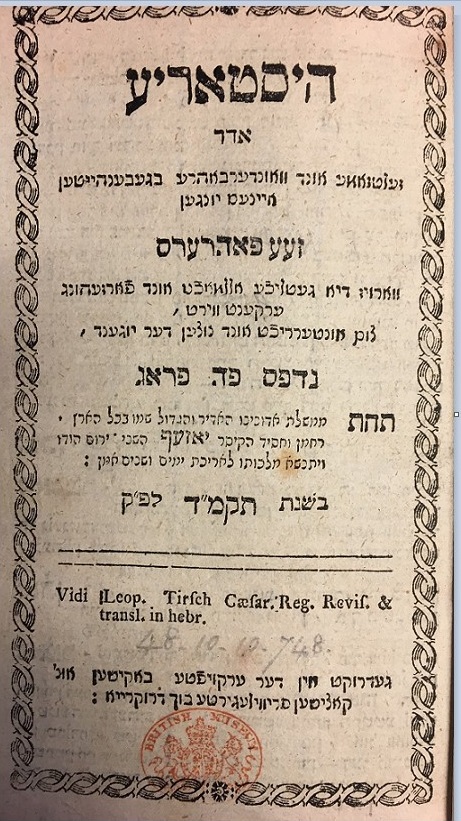 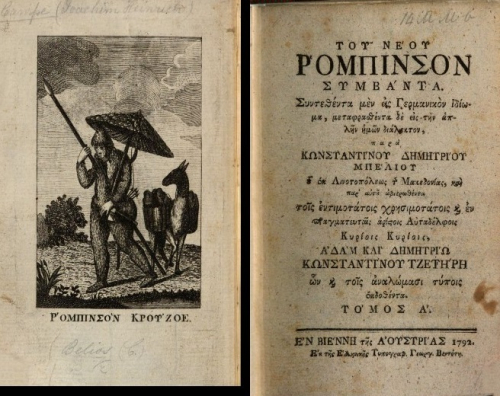 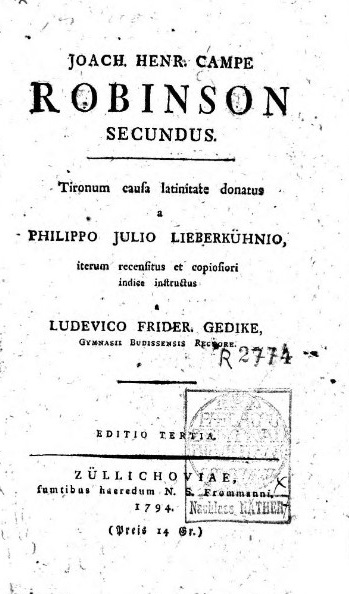 Like the Latin versions - and probably the Greek one - some of the other translations are also obviously aimed at language learners rather than native speakers, as is clear from the notes explaining vocabulary: we have English translations with notes in German and in Danish, and a French translation with Danish notes. 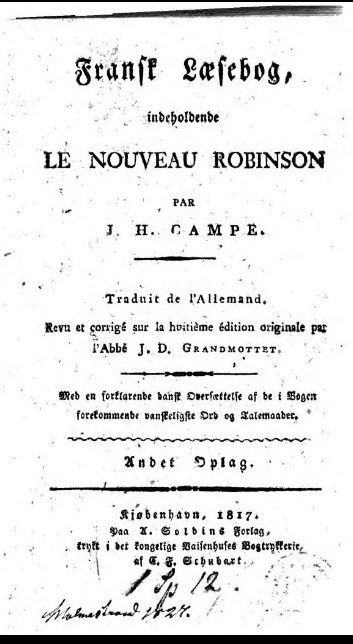 Like Defoe’s original, Campe’s adaptation was itself adapted and changed. Some translations (and later German editions) jettisoned much or all of the framing discussion and and stuck to the basic story of Robinson’s adventures. Some translations even claimed to be versions of Defoe’s work rather than Campe’s. The book also inspired two sequels by Christoph Hildebrandt, Robinsons Colonie and Robinsons letzte Tage (RB.23.a.20778), in which the island becomes a European colony where Robinson eventually returns to live out his last days.

Unlike the slightly later, similarly moralising, German-language Robinsonade, Der schweizerische Robinson (The Swiss Familiy Robinson), Campe’s work has not maintained its popularity, but for many 19th-century children it would have been their first introduction to the character of Robinson Crusoe and the basic outline of Defoe’s story. 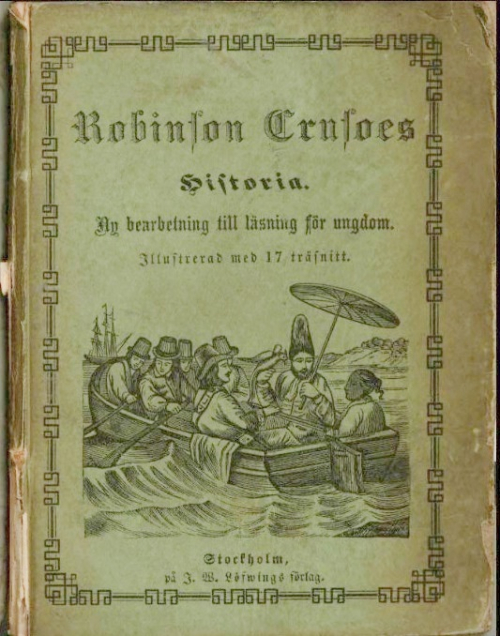