How to Catch a Whale? (And Some Herring, Too)

Sometimes an opportunity to net a big fish that is irresistible comes along. Last year a title appeared in a dealer’s catalogue that was similar to a title destroyed in the bombing of the British Museum in September 1940. Being able to replace a destroyed copy does not happen often, and I was able to acquire it with the help of funds from the British Library Members.
The book in question is a work on whaling: 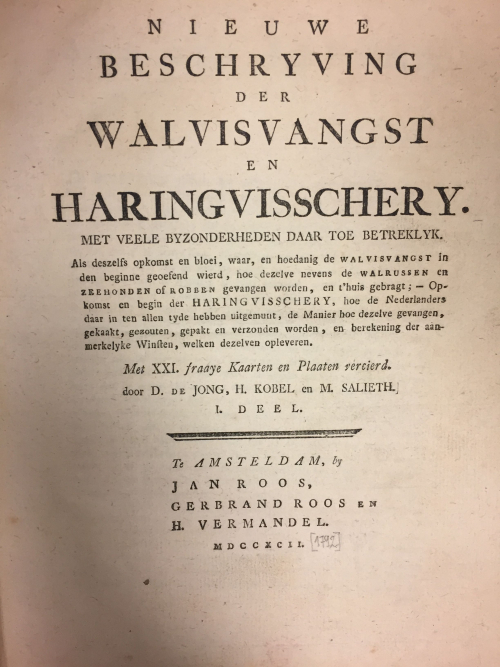 The book is interesting in quite a few ways. We do not know who the author of this whaling manual is. Joop Schokkenbroek, an expert on Dutch whaling history, believes the author was a whaler himself, who wrote from experience.

The names on the title page refer to the artists who made the engravings: Dirk, or Diederik de Jong, Hendrik Kobell and Matthias de Sallieth.

Of Dirk de Jong we know very little. No date or place of birth is known. All that is certain is that he worked in Rotterdam from 1779-1805. He was an illustrator and engraver, especially of maps. However, none of the maps in the book carry his name, or any name for that matter, so I cannot say whether de Jong made them. 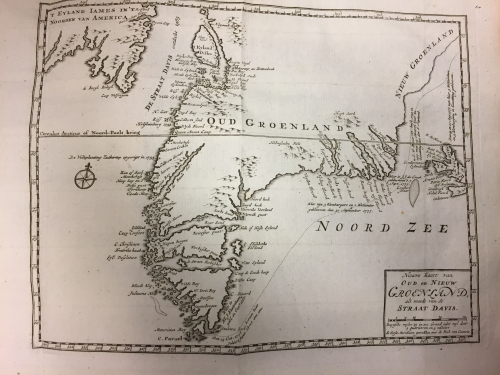 Engraving from the book depicting Spitsbergen, not Greenland. RB.23.b.7844

Hendrik Kobell lived from 1751 to 1779 and worked in London, Paris and Rotterdam. He came from a family of artists and draughtsmen. While some of his relatives specialised in drawing cattle, Hendrik preferred ships, seascapes and sea battles.

The third artist who contributed to the book is Matthias Sallieth (1749-1791). Originally from Prague he settled in the Netherlands in 1778. He copied Dutch artists from the past, such as Willem van de Velde the famous painter who witnessed sea battles first hand and then painted them.

Many of the engravings in the book bear both names: Kobell and Sallieth, indicating a close working relationship. From the names and dates on the engravings it seems likely that Sallieth was the artist and Kobell the engraver. 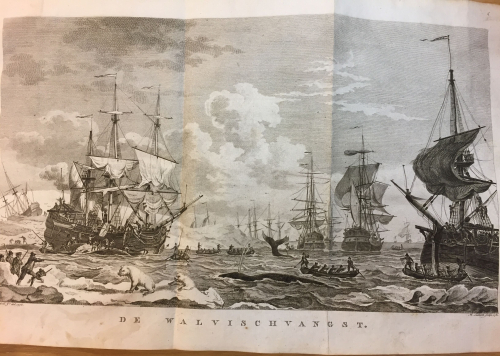 Engraving by Kobell (engraver) and Sallieth (artist) of a whaling scene. RB.23.b.7844

Sallieth did a nice little sketch of the heads of the four Dutch naval commanders who were involved in the Battle of Medway, in 1667, taken from earlier works. One of them is Michiel Adriaansz de Ruyter (1607-1676), who as a young sailor in 1633 served as pilot on board whaling ship De Groene Leeuw (The Green Lion) , hunting whales near Spitsbergen. He wrote an account of this expedition, a summary of which was re-issued in a collection of six other journals on whaling voyages. 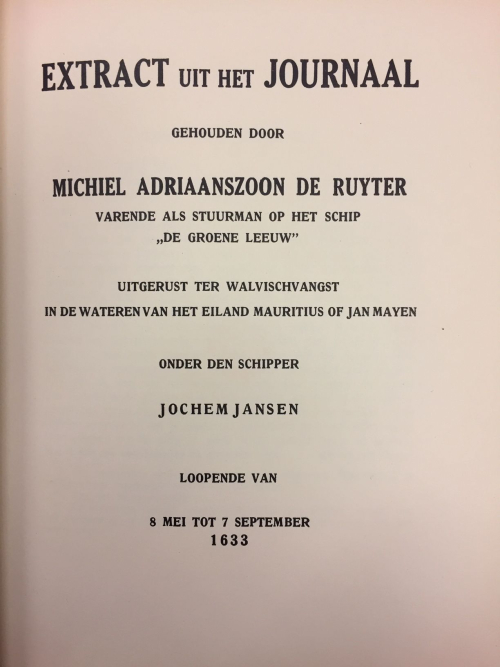 Title page of the summary of the journal by Michiel A. de Ruyter of his expedition to the Isle of Jan Mayen. In: L’ Honoré Naber, Walvischvaarten, overwinteringen en jachtbedrijven in het Hooge Noorden 1633 – 1635 (Utrecht, 1930) Ac.9017.b/8.

De Jong’s work saw two print runs in quick succession, one in 1791 and one in 1792. This copy is from the second issue. The destroyed copy was from 1791, so it is not an exact match, though close enough. The book consists of four parts: the first is about the history of whaling and the manner in which the whales, walruses and seals are caught, and it gives a description of the various species of these animals. 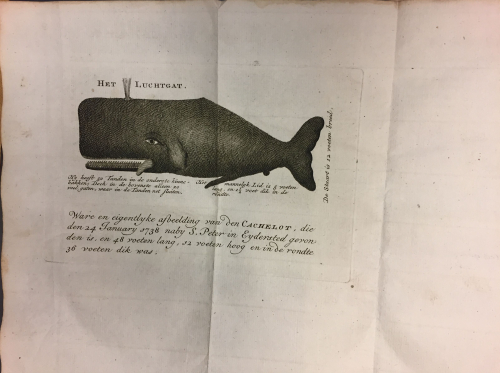 The Library holds many more whaling journals, dating as far back as the early 17th Century, describing expeditions to the Arctic and Antarctic, from the late 16th Century onwards. Adventures and hardships endured by the whalers were very popular with readers back home. Our collections provide ample material for another blog.

De Jong’s book stands out for its attention to the wider context in which whaling took place. Apart from the practical aspects of whaling and herring fishing, it describes not only the seas where fishing occurred, but also the surrounding lands, the people that lived there and the flora and fauna. 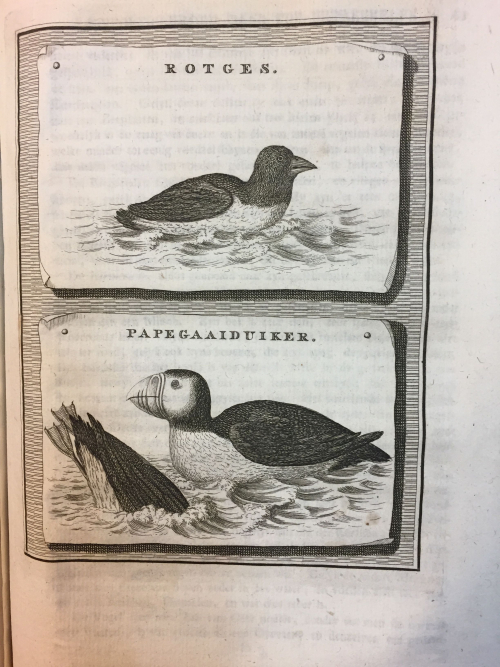 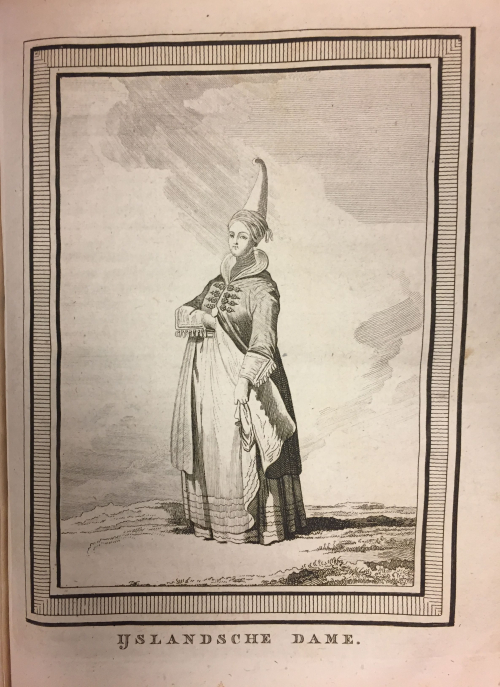 The last chapter discusses the herring fishery, which includes a foldout engraving of the lifting of nets by Kobell and Sallieth. Why is herring fishing included here? I’m not sure. Herring fishing was certainly a major trade for the Netherlands; called the Big Trade. 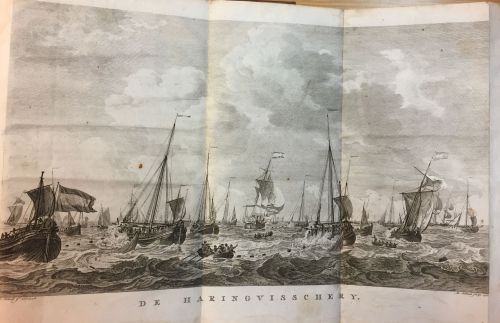 By the year 1800 whaling had declined, due to wars and competition. King William I tried to revive the industry with large subsidies. I wonder whether the King had read De Jong’s book. Schokkenbroek wrote a review of the facsimile edition published in 1992. In it he wonders whether the author’s intention had been to revive interest in the whaling industry once more. On the last page he refers to the glorious history of Dutch whaling “that from the oldest times onwards was held for a goldmine to this Commonwealth, will continue to flourish, and deposits its treasures in the lap of the Netherland’s inhabitants.”

It wasn’t to be. In the early 19th Century the industry collapsed once more. It was only after the Second World War that private companies decided to go out whaling again. There was a lack of foreign currency as well as margarine, so the best way for the Dutch was to get their own oil to make margarine. With help from the Dutch government the ship Willem Barents II completed eighteen expeditions to the Southern hemisphere. When this financial support was stopped whaling became unsustainable. In May 1964 the Willem Barents II returned to port with the very last oil.