Hrvatska revija (‘Croatian Review’) was a Croatian émigré journal published in Croatian in Buenos Aires (1951-1965), Paris (1966), Munich (1967-1977), Munich/Barcelona (1978-1990), and Zagreb (1991-2000). In its time the journal had the reputation of being the most sought-after cultural, literary and political journal of the Croatian emigration. It was also regarded as the most successful project of Croatian émigré publishing. The significance of Hrvatska revija today lies in the material preserved in its over 33,000 pages, containing some 11,000 articles and 1700 book reviews which, published over a period of 50 years, closely recorded and documented Croatian émigré life and culture. It is also an indispensable source for the study of recent Croatian history. 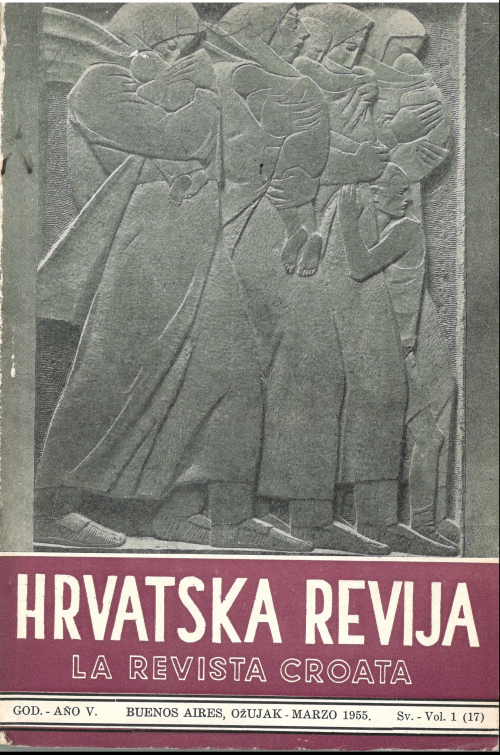 Front cover of the March 1955 issue of Hrvatska revija (P.P.7615.ch) showing a relief in stone by Ivan Meštrović, ‘Croatian mothers on the run’.

In 1951 Croatian émigrés Vinko Nikolić, a poet and journalist, and Antun Bonifačić, a writer, founded Hrvatska revija as a cultural and literary quarterly. From 1955 Nikolić was its sole editor until his death in 1997. Hrvatska revija was modelled on the notable literary journal of the same name published by the Croatian cultural society Matica hrvatska in Zagreb from 1928 to 1945. (Hrvatska revija: dvomesečnik Matice hrvatske. Ac.8967/19.). After Nikolić’s death in 1997 the journal was again published by Matica hrvatska from 1998 to 2000.

The journal had a steady following and was one of the most widely-read literary journals in Croatian émigré communities. This success was partly due to Nikolić’s editorial skills and his selection of journal associates which reached beyond members of the Ustaša, the Croatian ultranationalist pro-Nazi organisation, to which he had once belonged.

Nikolić’s Hrvatska revija published literary pieces, historical and political articles, literary criticism, book, music, theatre and art reviews, essays, memoirs, and travel writings. The journal was exquisitely illustrated with drawings, vignettes and other artistic contributions. Altogether there were around 600 contributors. In addition to original contributions Hrvatska revija had regular features, such as notes on cultural events, in particular about Croatian print and publishing activities, obituaries, and other useful information of general interest for Croatian émigré communities. The journal was funded by subscription and by support from loyal followers within these communities. 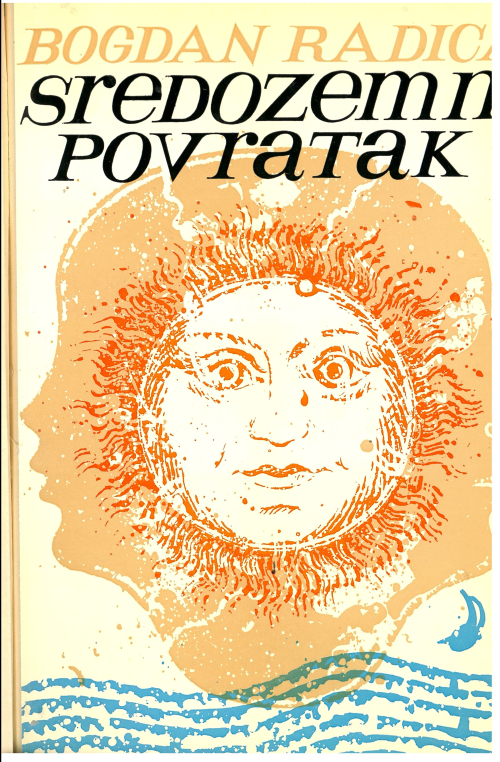 Hrvatska revija promoted itself as an all-Croatian, non-party journal, aimed at Croatian people abroad and at home, dedicated to the cause of Croatian state-building and fostering national identity. By embracing democratic political systems in the west and denouncing terrorism as a political struggle, Nikolić made a clear shift away from his Nazi past but remained a right-wing ideologist.

He tolerated and printed the critical ideas of the former members of the Ustaša regime in the Independent State of Croatia, but didn’t allow criticism at large. He therefore advocated a revisionist one-sided national history of the recent past. Nikolić regarded people who died fighting for the Independent State of Croatia as martyrs, and depicted those who fought against Nazism as communists who ruled over Croatia against the will of the majority. Hrvatska revija was not in the least interested in the significant contribution of the Yugoslav partisans to the defeat of Nazism in Europe, Yugoslavia and Croatia.

Notwithstanding these limitations Hrvatska revija claimed that 90 percent of Croatian writers and publicists abroad had contributed to the journal. It enjoyed the reputation of being an organ of Croatian intellectuals abroad, which brought together Croatian political émigrés of different political beliefs. 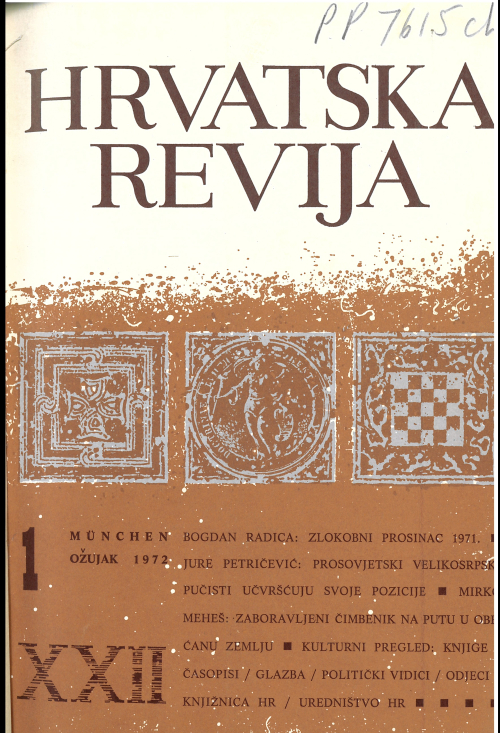 The journal cherished the culture of anniversaries and celebrated important events in Croatian culture and history. For example Hrvatska revija was the first to write about the Bleiburg tragedy of 1945 and estimated the number of casualties to be over 200,000, largely based on the fundamental concept of Croatian victimhood during war. This kind of assessment, provided in émigré literature, made a huge impact at home since this topic had not been discussed in Communist Yugoslavia. 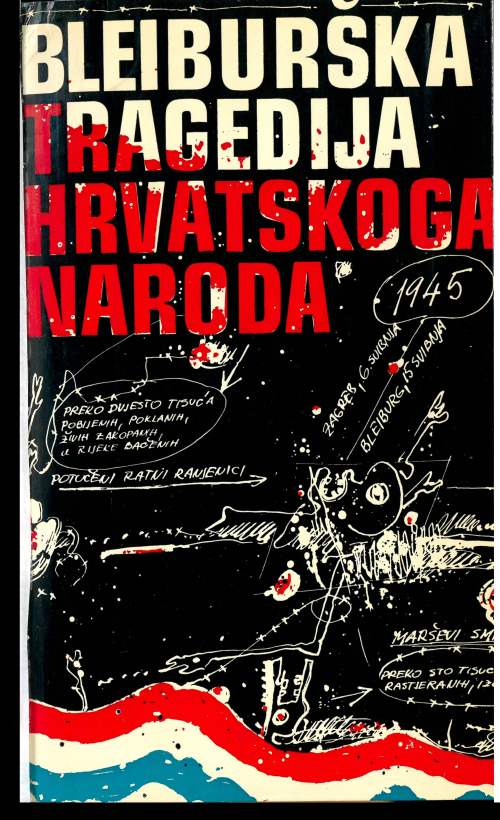 Similarly Croatian historical personalities who argued for the building of an all-Croatian state were given due attention, whereas those who promoted the unity of the South Slavs, were regarded by Hrvatska revija as people who didn’t believe in Croatia. This simple formula of Hrvatska revija meant that if someone was for Yugoslavia they were automatically against Croatia, as it was impossible to be both. Even the nation’s greats such as Bishop Josip Juraj Strossmayer or the historian Franjo Rački were barely mentioned in the journal. On the other hand inspiration was sought in Croatian nationalists abroad or dissatisfied apostates from the communist regime at home, among whom Franjo Tuđman was given a prominent place in Hrvatska revija before 1990.

The journal worked hard to reconcile former enemies and bring together political opponents around a political idea which claimed that neither the Ustaša lost nor the partisans won in the Second World War but that only Croatia was defeated. For Hrvatska revija, Yugoslavia was a violent and oppressive state within which Croatia was enslaved. The journal finally saw the violent death of Yugoslavia and the accomplishment of its political programme of a free Croatia for the Croatian people. 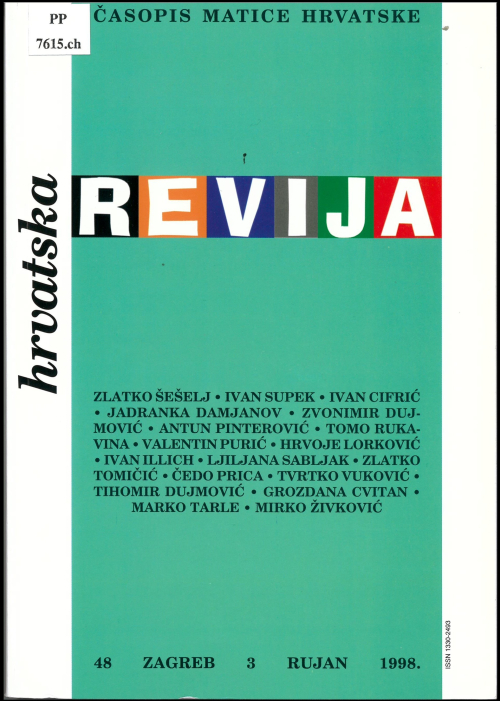 In addition to the abundance of research material on émigré life and contemporary Croatian culture and history, Hrvatska revija offers riches to researchers into the development of right-wing ideology, political thought and ideas in Croatia and in general.

Posted by European Studies at 12:10 PM