Polish author Olga Tokarczuk and Austrian writer Peter Handke have been awarded the 2018 and 2019 Nobel Prizes in Literature after the award was suspended last year due to a sexual assault scandal.

Born in Poland in 1962, Olga Tokarczuk, the winner of the 2018 Prize, is one of the most critically acclaimed contemporary Polish writers. Noted for the mythical tone of her writing, she is adored by her readers and highly praised by critics. Tokarczuk has won many prestigious literary awards for her works both in her native country and abroad. In 2018 she won the Man Booker International Prize for her novel Flights, translated into English by Jennifer Croft (London, 2017; ELD.DS.228759). The book was first published in Poland in 2007 as Bieguni (). The Polish title refers to runaways, a sect of Old Believers, who believe that being in constant motion is a trick to avoid evil. Flights is a fragmentary novel consisting of over 100 episodes, each exploring what it means to be a traveller through space as well as time. Set between the 17th and 21st centuries, the novel includes some fictional stories and some fact-based, narrated from the perspective of an anonymous female traveller. 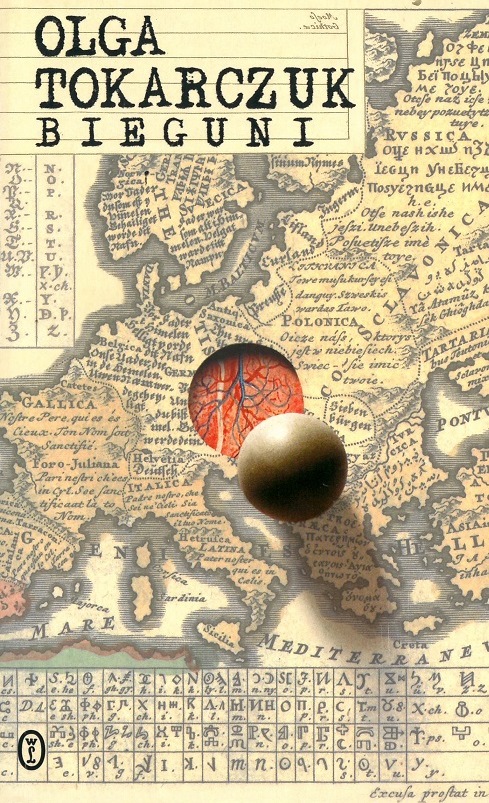 A trained psychologist, Tokarczuk spent a few years practising as a therapist before devoting her working life to her literary career. She is the author of nine novels and a few short stories and essays, and her books have been published into 30 languages including English, Chinese and Japanese. The main translator of her books into English is Antonia Lloyd-Jones, whose most recent translation is Drive your Plow over the Bones of the Dead (London, 2018; ELD.DS.325469), shortlisted for the 2019 Man Booker International Prize. The novel, regarded as an eco-crime story, explores the issues of the animal rights and vegan movements unveiling the hypocrisy of traditional beliefs and religion. The book and the film Spoor by Agnieszka Holland based on this novel caused a political uproar in Poland. 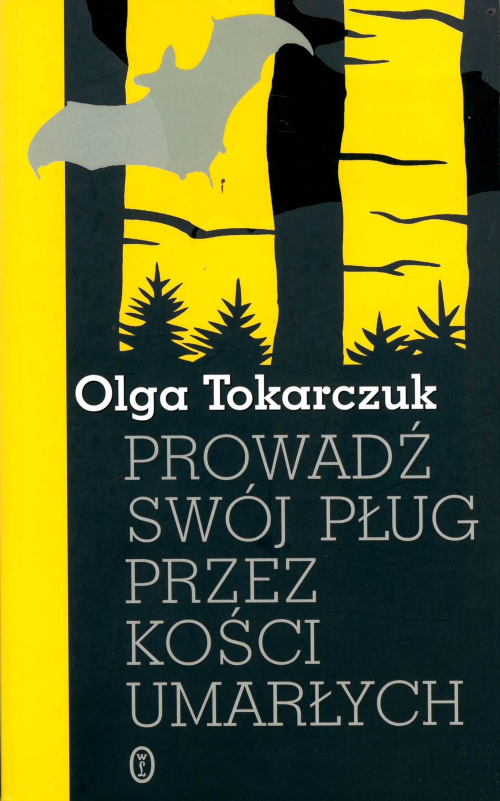 Olga Tokarczuk was a speaker at two recent British Library events: “A life of Crime? Crime writing from Poland”, in 2017, and “Olga Tokarczuk: An evening with Poland’s best”, in 2018. Recordings of both events are available to listen in our Reading Rooms via the online catalogue.

The 2019 prize has been awarded to the Austrian writer Peter Handke. The Nobel Foundation cites his “influential work that with linguistic ingenuity has explored the periphery and the specificity of human experience.” He has won many of Austria’s and Germany’s major literary prizes over the course of a long career.

Born in 1942, Handke began to write while studying at the University of Graz. He became involved with the ‘Grazer Gruppe’, a group of writers (including another future Austrian Nobel Laureate, Elfriede Jelinek) associated with the literary magazine manuskripte (P.903/797). 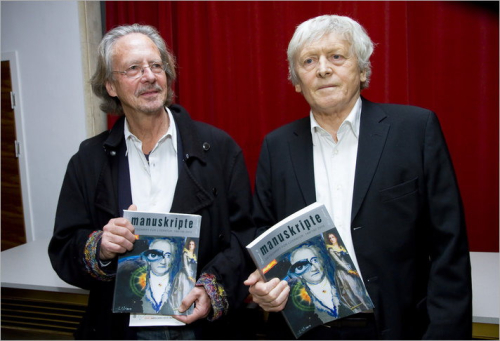 Peter Handke (left) and magazine editor Alfred Kolleritsch at an event to mark the 50th anniversary of manuskripte, 2013. (Photograph by Dnalor_01 from Wikimedia Commons CC-BY-SA 3.0)

Handke became known in the 1960s for his experimental plays such as Publikumsbeschimpfung (Frankfurt am Main, 1967; X.907/8495. English translation by Michael Roloff, Insulting the Audience (London, 1971) 11663.l.2/42.). This begins with the words, “You will not see a play” and has the uncostumed actors address the audience from what is usually a bare stage. He has also written novels, poetry and essays. English-speaking audiences, although they may not realise it, are perhaps most likely to have come across his work as the screenwriter for Wim Wenders’ film Wings of Desire (Der Himmel über Berlin). Handke has also won awards as a film director.

From the start of his career Handke attracted controversy, although not necessarily for the experimental nature of his work. In an early public appearance at an event organised by the influential post-war writers group Gruppe 47, he gave an angry speech attacking the Group and the work of its members. More recently he has been criticised for his stance and his writing on the Balkan Wars of the 1990s. This has led to protests at the award of other literary prizes to Handke in recent years, and the Nobel award has attracted similar criticisms.