The British Library has, for the third year running, worked with the British Fashion Council on the Research Collaboration Project. This year Glaswegian radical designer, Charles Jeffrey, joined forces. To mark the start of this collaboration, a catwalk show of Jeffrey’s brand Loverboy SS20 collection ‘Mind’s instructions’ was staged at the Library earlier in the year, followed in October by a Masterclass organised for BA final year and MA students, and a launch of the Research Competition. Charles Jeffrey, considers knowledge to be a ‘form of armor’. His brief instructs students to compile a research-focused fashion portfolio inspired by the BL resources. The show and tell, being the interactive part of the Masterclass, gave curators opportunity to engage with students and inspire them with samples of the visually intriguing collection items. 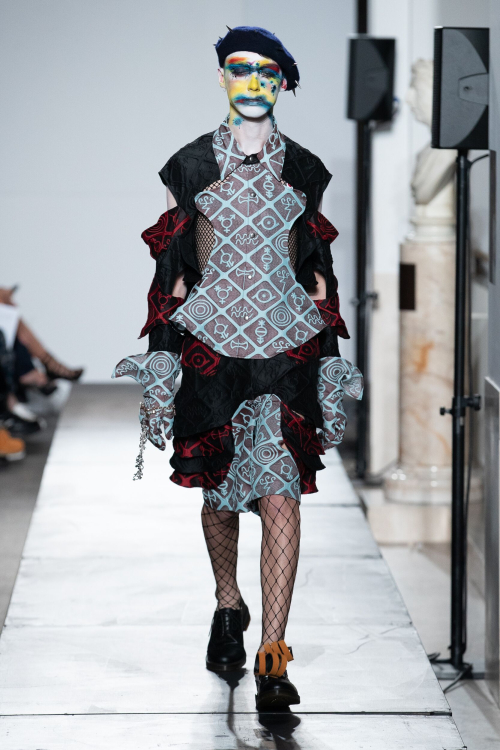 In this blog post the European and Americas team have selected some of the most popular items shown on the day. It is not surprising that items featuring colours, patterns and poetry appealed to fashion students the most. The designs will reveal whether ‘Perhaps peace can still be found in the beautiful and the unexplained?’, as Jeffrey Charles states in his brief. 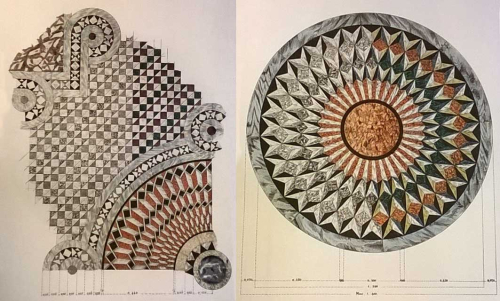 Ferdinando Ongania and his Venetian workshop spent more than 10 years (between 1881 and 1893) publishing the 18 volumes of La Basilica di San Marco in Venezia. Inspired by John Ruskin’s work, Ongania commissioned studies to historians, architects, and archaeologists, and put together an exceptional body of photographs and illustrations. His work depicts every single detail of the exterior and interior of Saint Mark’s Basilica, from the architecture to the sculptures and the decorations. The British Library owns the full set, but the volume I chose for the show and tell focuses solely on the mosaic floors, whose drawings I find particularly inspiring for the kaleidoscopic richness of the details and beauty of the colours. 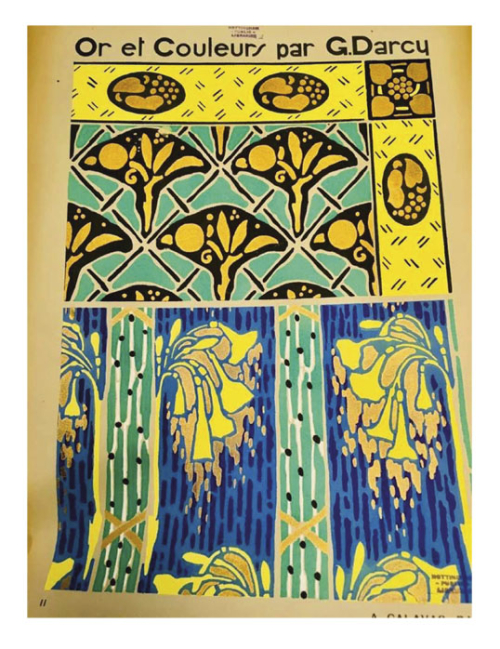 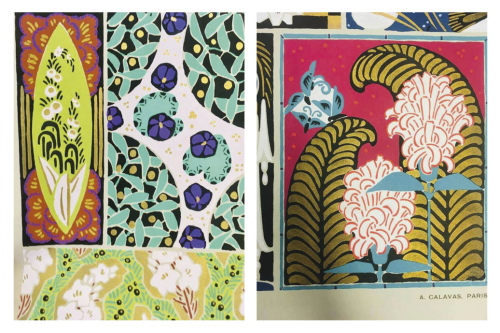 The designs in the albums contain a variety of geometric motifs, flowers, plants and birds typical of the Art Deco style. Art Deco fashion, which started in France in the 1920s, and took its name from the Exposition Internationale des Arts Décoratifs, was inspired by new artistic movements, most notably Cubism and Fauvism, by the bright colours of the Ballets Russes, and by the “exotic” styles of Japan, Persia, ancient Egypt and Maya art, among others.

The technique of “Pochoirs”, or stencils, used here, was at the height of popularity in France during the 1920s. It was frequently used to create prints of intense colour and the brilliant effects of gold and silver, as expressed in the title of these collections of plates. The full title explains further that the plates were made in the “new taste” for use by “Fabric makers, Decorators, and ornaments designers” – it was for sale at the bookshop of the Arts Décoratifs.

A particularly interesting feature of this item is that it comes from Nottingham Public Library, which acquired it very soon after its publication. It was quite successful, and was borrowed 25 times between 1922 and 1930.

I chose this item because of my interest in the Art Deco movement and the pochoir technique. The plates are very beautiful of course, and the colours are still incredibly vivid, but most of all I think it is fascinating to have a real proof of interest from readers (presumably amateur decorators and fashion lovers) in the 1920s.

The Fashion Research Competition and the staff favourite winners will be announced on 31 January 2020 when during the reverse show and tell students will reveal their work inspired by the British Library collections.