Ceremonial greetings in the Grand Duchy of Lithuania

Gratulationes Serenissimo ac Potentissimo Principi Sigismundo III… published in Vilnius in 1589 is the oldest book in the British Library’s holdings which includes text in the Lithuanian language. It came to the Library as part of Sir Hans Sloane’s collection – one of the founding collections of the British Museum. It is not known when and how Sloane acquired it. 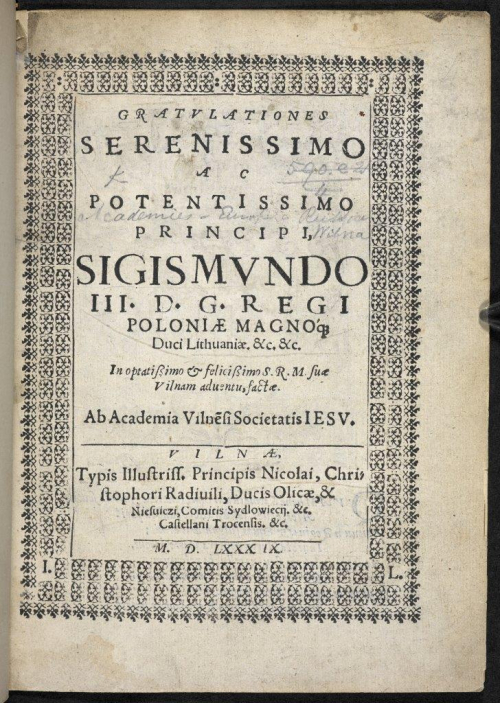 Gratulationes, written by the Vilnius academic community, is dedicated to King Sigismund III Vasa who visited Vilnius in 1589. It is an example of ceremonial greetings, a literary genre which became popular in the Grand Duchy of Lithuania in the 16th-18th centuries. Ceremonial greetings were originally written in Latin but later also in other languages. In the Grand Duchy of Lithuania they were used to welcome rulers and noblemen to Vilnius.

There was a set route of ceremonial processions in Vilnius: participants would gather in St Stephen’s Church, the procession would start near the Rūdninkų Gate and finish at the main entrance to the Palace of the Grand Dukes of Lithuania. Welcoming ceremonies were very elaborate: King Sigismund was greeted in 1589 by a triumphal arch with four towers erected in Rūdninkai Street, adorned by portraits of Jagiellonian rulers and allegorical paintings. When the king was approaching the arch he was welcomed by four students from the Jesuit Academy, coming down from the towers dressed as angels. They symbolised the Republic of Lithuania, Religion, Arts and Sciences, and Vilnius. The main part of the ceremony took place in the Palace and started with six students greeting the king with short maxims about his glorious ancestors. Epigrams were written for each member of the Jagiellonian dynasty, with allusions to ancient Greek and Roman history and mythology. There were also actors personifying Religion, Virtue, Nature, Fortune, Rumour and Glory. 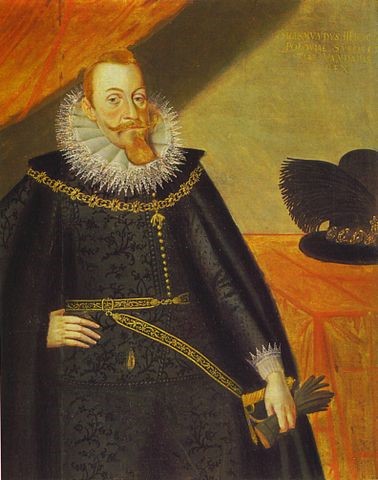 Several collections of ceremonial greetings are known to have been published in the Grand Duchy of Lithuania. Gratulationes Serenissimo ac Potentissimo is particularly important as it is the first multilingual collection of greetings prepared by scholars from the Jesuit Academy in Vilnius (later Vilnius University): it includes texts in Latin, Spanish, Italian, French, German, English, and Polish. It also includes the earliest example of ceremonial greetings in Lithuanian, a panegyrical poem – the first Lithuanian text in hexameter, and the first original literary work in Lithuanian in the Grand Duchy of Lithuania. Inclusion of this text suggests that the Lithuanian language is treated here as equal to other languages, and like other languages capable of expressing complex ideas. 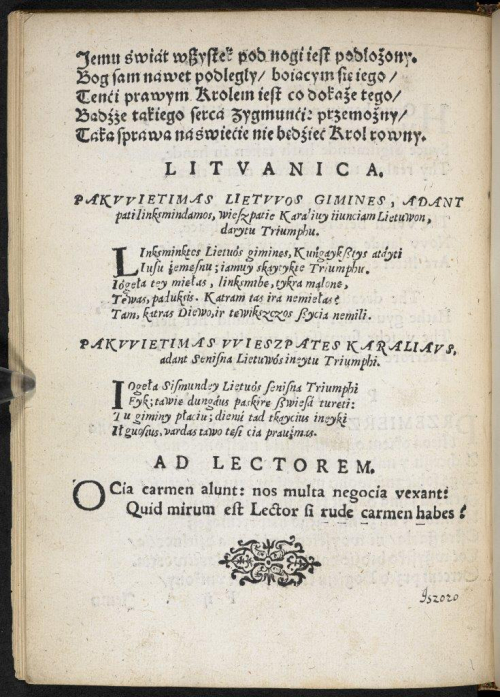 Interestingly, another collection of greetings dedicated to Sigismund III Vasa was published in the same year and included welcoming texts in Finnish and Swedish.

Part of court culture, ceremonial greetings were an excellent way for members of the academic community of the Vilnius Academy to show off their erudition, knowledge of rhetoric, mastery of Latin and ability to write in a variety of languages.