Of the many groundbreaking sculptures Umberto Boccioni created between c. 1913 and 1915, only a handful remain in existence today – most of them were accidentally disposed of on a rubbish dump in 1927. However, using a combination of vintage photographic material taken from books, and cutting-edge 3D printing and milling techniques, four of Boccioni’s destroyed works have now been reconstructed by two digital artists: a volumetric study of a human face titled Empty and Full Abstracts of a Head, and three of the artist’s iconic striding figures. Modern audiences can now ‘see’ these lost masterpieces for the very first time at the Estorick Collection of Modern Italian Art in London. 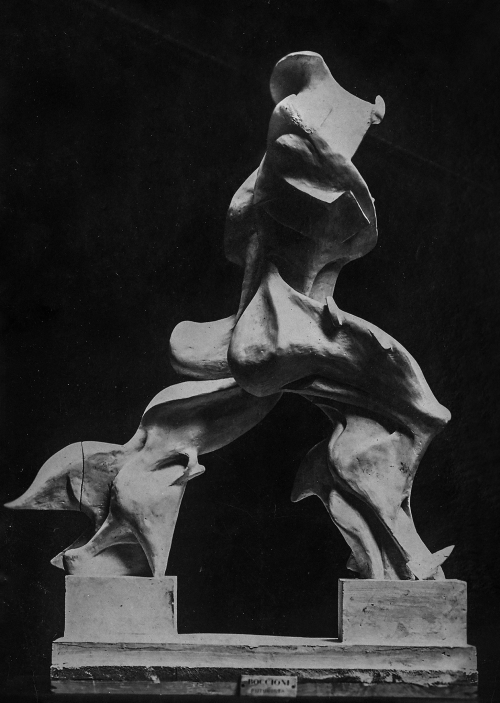 Umberto Boccioni, Unique Forms of Continuity in Space, 1913. (Reproduced by kind permission of the Estorick Collection)

Boccioni’s best known surviving three-dimensional work is undoubtedly Unique Forms of Continuity in Space (1913). One of the most instantly recognisable of all modernist sculptures, it represents an aerodynamic figure – part man, part machine – racing energetically towards the brave new world envisioned by the Futurist movement, a world ‘multiplied’ by technology, speed and industrialisation. 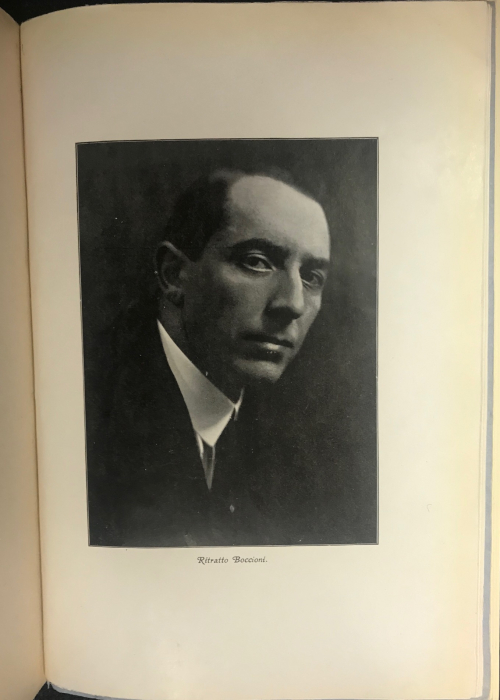 This work was in fact preceded by three sculptures on the same theme: Synthesis of Human Dynamism, Speeding Muscles and Spiral Expansion of Muscles in Movement. Until today, all that remained of these earlier works were a number of photographs taken in Boccioni’s studio and at three exhibitions around the world between 1913 and 1917. More clearly than ever before, the reconstructed sculptures reveal the evolution of Unique Forms of Continuity in Space, enabling us to perceive the progressive refinement of Boccioni’s ideas and the streamlining of his sculptural forms. 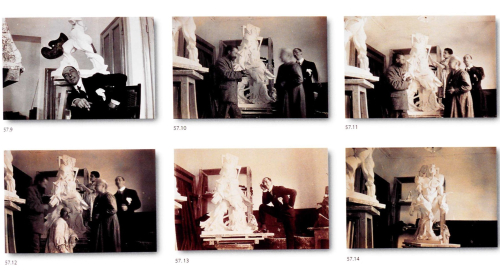 Why attempt to recreate long-lost works of art? Surely, only their creator could know how they looked. Projects such as this depend on the quality and quantity of the surviving visual documentation. In the case of Boccioni’s sculptures, sufficient photographic material existed to make reconstruction feasible and worth pursuing. Roberto Longhi’s detailed 1914 essay Scultura Futurista Boccioni concerning Boccioni’s works also provided many important clues as to their appearance. It is crucial to note that the reconstruction process was not undertaken as a mere technical challenge; rather, it is hoped that the resulting pieces will offer new interpretative opportunities for both specialist art historians and the general public, providing fresh insights into Boccioni’s sculptural practice. In this particular instance, the project also represents a fusion of art and technology that would have doubtless appealed to the Futurists.

Images showing the reconstruction process of Synthesis of Human Dynamism

The reconstruction process went as follows:

1. High resolution photographs of Boccioni’s sculptures were scanned from books or acquired from different museums, publishers and institutions. In total, 21 photographs were used for the four reconstructions. Two books were primarily used:

2. Using image software, the contrast of the images was adjusted, and areas in shadow were lightened in order to bring out as much detail as possible.

3. Each of the sculptures was extracted from its surrounding space, effectively producing ‘cut-outs’ from different angles.

4. Using 3D sculpting software, these cut-outs were imported, then set as reference views.

5. The starting point of the 3D model was a ‘blob’ of digital clay which was moulded to fit the contours of the sculpture in all of the reference views. This semi-transparent form made it possible to trace the shapes of the underlying image, just as transparent paper can be used to copy a picture placed below it. The digital moulding tools mimic their real world counterparts and allow easy shaping of the ‘clay’.

6. By taking into account overlapping and receding forms, the time-consuming sculpting process eventually produced a form that was very close to how the actual sculpture must have looked. The mesh resolution was increased when all of the basic shapes were in place, and further enhanced with the addition of increasingly smaller details.

7. Light sources were adjusted in the rendering software to simulate the shadows cast in the original photographs as closely as possible. This helped to establish the size of the protruding and receding shapes, and the work’s overall proportions.

8. The finished 3D model was printed or milled. 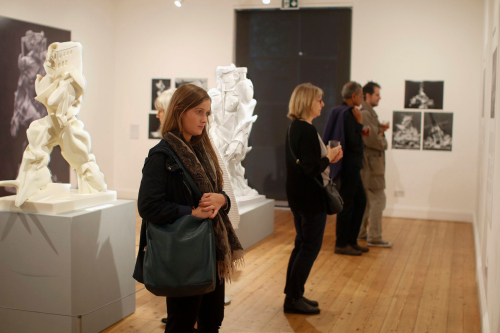