The Book as a Project: Giambattista Bodoni

This is the first of a series of blogs dedicated to Italian typography.

It is not an easy task to write something brief about the Italian typographer Giambattista Bodoni. Bodoni the polyglot, Bodoni the artist, Bodoni who achieved rock-star fame during his lifetime. He made the Italian town of Parma world capital of printing from the second half of the 18th century, an obliged stop for intellectuals and bibliophiles during the Grand Tour. Rulers and princes would visit his workshop and he would dedicate books to them, in order to consolidate his prestige. Trained in typography and ‘oriental’ languages in Rome, having unsuccessfully tried to come to London to learn new skills and perfect his technique, in 1768 Bodoni was called to Parma by Ferdinand of Bourbon, with the purpose of establishing and managing the government Royal Printing Office that he would be in charge of for the rest of his life. 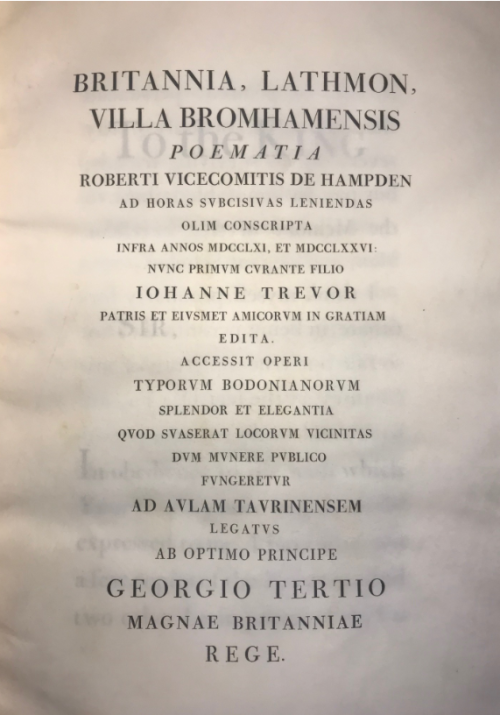 Despite never leaving Parma, Bodoni managed to be known internationally, by choosing his patrons (Napoleon and his family, the monarchs of Spain, Italian rulers), by printing in many languages and scripts, and by setting his much-imitated typographic style. In his own words, he ‘shook the old typographic conventions’, introducing harmony and proportion in the frontispieces, showing neo-classicist taste in his bare, epigraphic compositions. The sense of perspective and the balance between space and font offer optimal readability to his pages. The series of crisp and neat ‘bodonian’ typefaces that he designed in the late 1780s are still very popular today, appreciated for the clear contrast between the thickness of strokes and the thinness of rules and serifs. 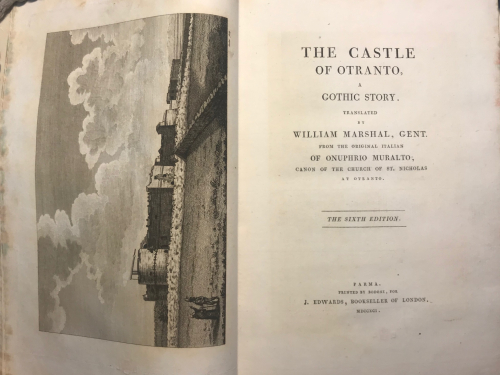 A lot was printed in his Greek typefaces, and many of his books were in foreign languages, including English. The most celebrated of his works in English were Walpole’s 1791 edition of The Castle of Otranto, on behalf of the London bookseller Edwards, and the 1792 Britannia by Lord Hampden. Of Britannia, the British Library owns the only copy printed on vellum (G.10064.), from the splendid library of Marshal Junot, sold by auction in London in June 1816 and purchased by Thomas Grenville for his rich collection of rare books, which are now part of the British Library. 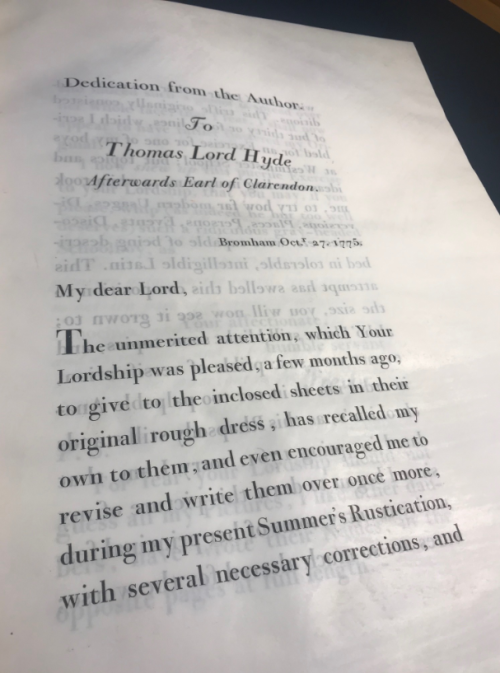 Constantly in competition with his fellow typographers (notably with the Didot brothers in France, known for the rigour of their editions), Bodoni liked to re-edit books published by others, trying to make them better. A case in point is the Oratio Dominica (a polyglot edition of the Lord’s Prayer), which Bodoni was invited to produce by Pope Pius VI when he stopped to see him in Parma. The Pope said that, during his recent visit to Paris for the coronation of Napoleon, in December 1804, he was gifted with a copy of the Oratio Dominica in 150 languages, by Jean-Joseph Marcel, director of the Imprimerie Nationale, and he challenged Bodoni to produce something finer and in more languages, to prove his skills.

In less than a year, Bodoni put together an acclaimed Oratio Dominica, in 155 languages, using 215 typescripts (including Phoenician, Tibetan, and Etruscan), some of which were missing from the French edition. 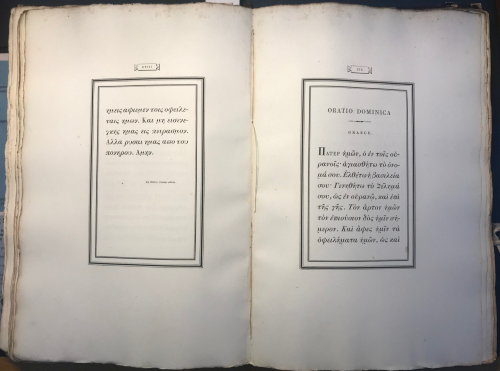 However, Bodoni’s masterpiece was certainly printed after his death, in 1813. Having produced his own types since 1771, in 1788 he published the first manual Manuale tipografico containing a hundred Roman type alphabets, 50 italics and 28 Greek alphabets. His alphabets were improved during the course of his career, and this project was accomplished by his widow, Margherita Dall’Aglio, with the posthumous publication of the final Manuale Tipografico in 1818.

The fruit of more than 40 years of work, this manual in two volumes was composed of 265 pages with roman types, capital letters, Greek and oriental types, borders, ornaments, numbers, and musical examples.

Bodoni’s Manuale Tipografico established high standards for typography. It offers an overview of the uniformity of design, neatness and good taste that made him famous and inspired generations of typographers up to the present day. But, this is a topic for my next blog…

Of the over 1400 ‘Edizioni Bodoniane’ (listed by H C Brook’s Compendiosa Bibliografia delle Edizioni Bodoniane) printed while Bodoni’s presses were active, in 1834, the BL collections has over 200, of which 38 are available digitally