Despite what title of this book might suggest, there is no need for Latinists or philologists: the Codex Seraphinianus is not a medieval manuscript, nor a translation from Latin, it is not written in an undiscovered or secret language either. All the scholarly efforts to decipher the text were dismissed by the author himself who revealed that the writing is asemic, therefore no hidden message to discover. And I guess this is the beauty of his work (the beauty of art in general): the trick can be exposed but the mystery remains, the mystery of creativity. 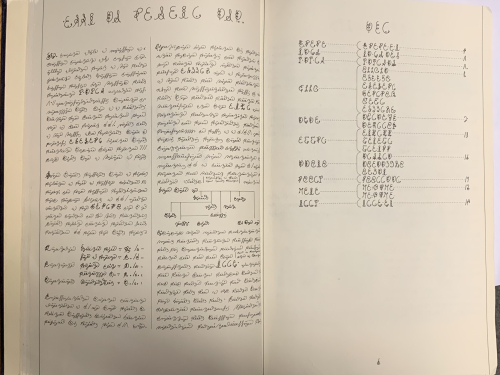 We look at “…those minute, agile and (we have to admit) very clear italics of his”, as Italo Calvino finely put it, and “we always feel we are just an inch away from being able to read”.

The art book by the Italian artist, designer and architect Luigi Serafini – an imaginary encyclopedia of an imaginary world – was first published in a two-volume edition in Italy in 1981, followed by a single-volume edition in 1983 published in New York, which is the edition held by the British Library. The limited editions and the value attributed to them make the Codex a rare item, sought-after by collectors. Paul Fisher Davies in his article gives an overview of the studies on the text: as he rightly points out, there is a narrative in the sequence of the images and in the way the text connects to them. Even though, the readability of narrative Davies refers to is still imaginary in that the text itself remains undeciphered, the connection between text and images has a powerful impact. Serafini says it himself in an interview: “There is no a written message or something to decode. There are other aspects. There are beauty, the relationship between the images and writing.” (You can see video of Serafini being interviewed here: https://www.the-mag.org/codex-seraphinianus-il-favoloso-mondo-immaginario-di-luigi-serafini/).

Certainly the book does not lack of the systematic division we expect from a science book, and this is marked by what can be assumed is the title, followed by an introduction and table of contents, before the beginning of each of the 11 “chapters” of the 1983 edition, as the photo above shows. However, even the illusory systematicity of the first chapter, which can be safely interpreted as dedicated to “botany” from beginning to end, does not seem to be applied in the second chapter. This begins with an illustrative catalogue of individual light particles, each with different shapes and names, and in the image below it the same light particles are shown as a swarm flying out from the head of a street lamp. This and the bigger catalogue of individual rainbow particles which comes after, tell us that the second chapter is dedicated to “light”. 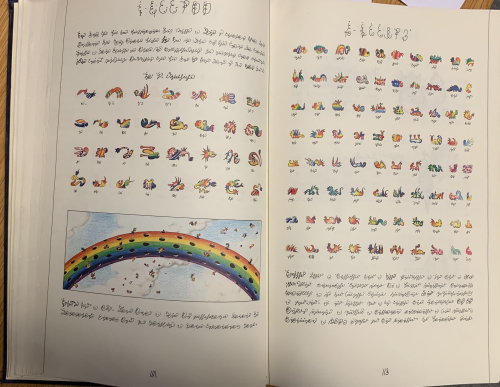 But the chapter changes pattern and shows images impossible to interpret, even though, the text below them gives us a sense of reconciliation, an explanation which cannot, does not need to be put in words. And it makes me wonder: can attempting to read asemic writing echo back as a liberating asemic thinking? As Calvino observes “Serafini’s writing has the power to evoke a world where the syntax of things has been distorted, it must contain, hidden beneath, the mystery of its indecipherable surface, a deeper mystery still regarding the internal logic of language and thought.”.

The second chapter continues with images of fishes, snakes, birds, dogs, deer, horses, and ends with this: 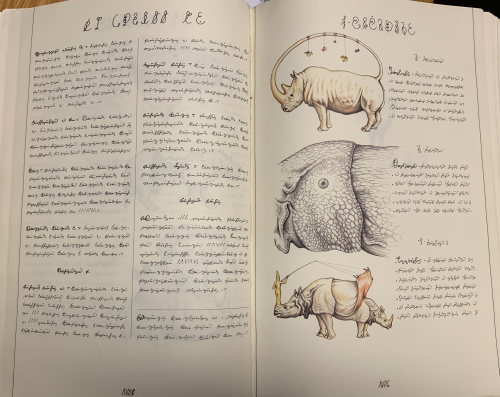 The third chapter does not even try to make us believe it’s focusing on anything in particular, yet it does not stop overwhelming us with surreal shapes and wonderful colours. And again in the following chapters, until chapter 7: this opens with a catalogue showing the profile view of human heads, which, after so many surreal images, we find ourselves absorbing with the same puzzlement.

The beautifully meaningless journey continues and ends with a page tightly and tiredly written (with a couple of words crossed out, and a couple of others inserted in between, in different parts of the text) and partly lifted as if it accidentally detached itself and, pulling up like a curtain, shows what was not meant to be shown: the broken bones of a hand laying on the floor of a tiny grim room.

In the end what Serafini asks us to do is nothing but immerse ourselves in his magical, often disconcerting world. I find interesting that Serafini decided to give his art book – a book which celebrates freedom from the rules of interpretation and meaning – a title in Latin, which seems to impose a certain historicity based on those rules. I like to think that he does this to make us feel a contraction of time which propels us to a world where, dare I say, Ovid’s Metamorphoses and Pliny’s Historia Naturalis meet. As Serafini says in the same interview mentioned earlier, his work could be open to artists of the future, “ … every 5/6 years I could add a chapter and even in the future, I would imagine it as an open work which can be continued by other artist maybe for two or three centuries…”. 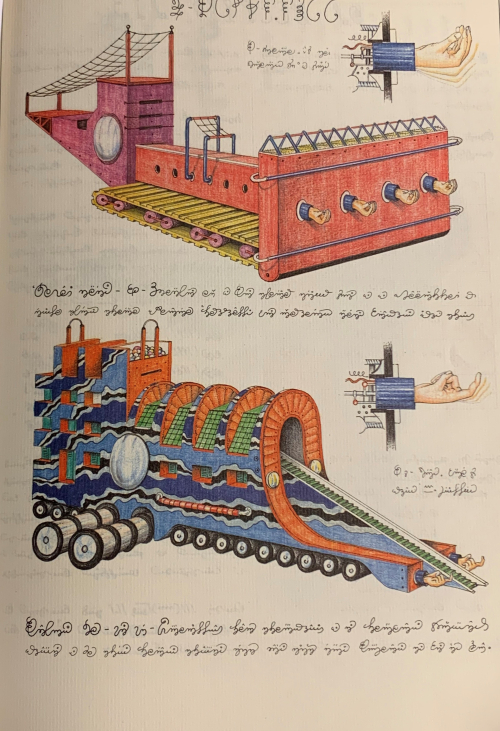 Italo Calvino, ‘The encyclopedia of a visionary’, in Collection of Sand. Translated by Martin L. McLaughlin (London, 2013). ELD.DS.180656