According to Otto Wang, author of niche publications in defence of the reputation of Danish ex-libris, and writing in 1927, no one had received more praise for their bookplate artistry than Ebba Holm. A painter, engraver and illustrator, Holm became most famous for 108 linocut illustrations to a 1929 edition of Dante’s Divine Comedy, in Christian Knud Frederik Molbech’s translation. Otto Wang sees Holm as belonging ‘to the not too many Danish artists who have really been interested in this special little art [of ex libris] and realized that it is necessary to cultivate it and subject it to a special study’.

In Wang’s survey of Holm’s ex libris art, he suggests the artist has given us two of the greatest Danish bookplates, one being for Harald and Karen Abrahamsen (answers on a postcard) and the other being Ebba Holm’s own. Recently, the library acquired L’Opinion et l’amour, a 1830 French book belonging to Holm herself, so we are lucky enough to be in the possession of this famed ex libris. Sadly we don’t know much about Holm’s personal library, and whether she had chosen the book because it was a historical novel written by a woman, Madame de de Saint–Surin, who had also written about the Middle Ages, or for its pretty binding by Janet, a Parisian bookbinder known for his decorative tastes. In any case, it is exciting to see her choice for this most personal design: 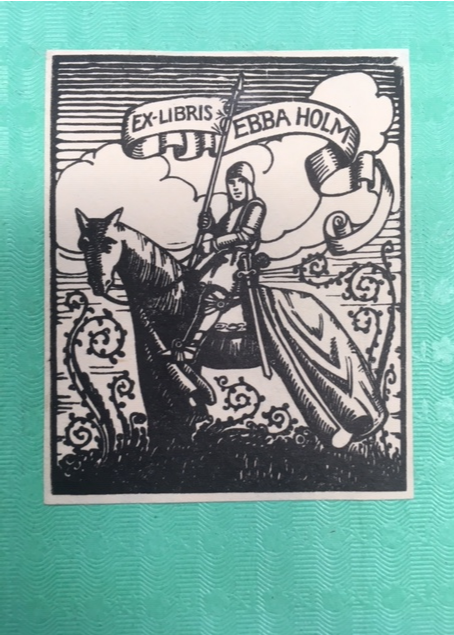 Holm’s love of medieval imagery, or of all things medieval, is expressed in her own bookplate, which features a knight (or could it be Joan of Arc?) holding a spear from which floats a banner displaying her name.

The library has since also acquired a copy of Johannes Jørgensen’s Dantestemninger (‘Dante moods’), a limited edition from 1928, which features a quartet of poems first published in Jørgensen’s collection Bag alle de blaa Bjærge (1913) here in large format alongside four striking woodcuts by Ebba Holm. Our copy has a small book label designed by the illustrator and stuck on the inside back cover. It bears her initials and is adorned with what looks like a heraldic eagle. 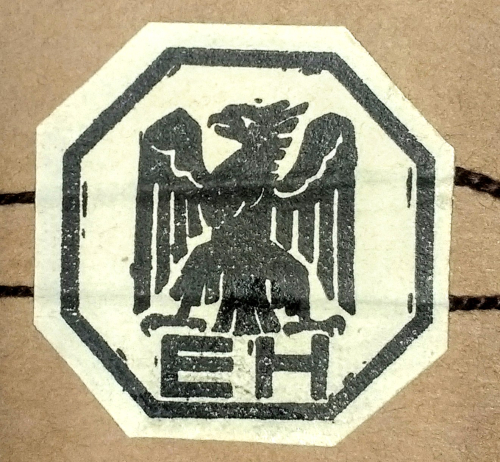 Ebba Holm’s initials underneath an eagle

Jørgensen and Holm were both Italophiles. Jørgensen (1866-1956) lived in Siena from 1914 and wrote the lives of St Francis of Assisi, Catherine of Siena and St Bridget of Sweden after his conversion to Catholicism around 1895.

The Dantestemninger were written at the time he was composing his work on Catherine of Siena and his research into the period allowed Jørgensen to explore an interest in Dante. As Jørgen Breitenstein has written, the poems often explicitly recall Molbech’s translation of Dante, as we see at the end of Jørgensen’s first poem’s reference to Inferno III, 1: ‘og fører ind til Staden, fuld af Jammer’ (‘Per me si va ne la città dolente’ / ‘Through me the way into the suffering city’). That said, Jørgensen portrays a wet, foggy, autumnal forest that has no real parallel to Dante’s Inferno, and Holm depicts a lost forest-bound protagonist in the first woodcut. 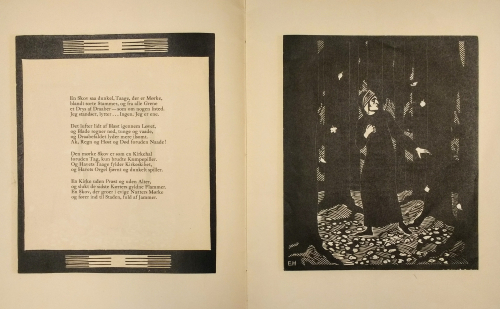 Holm might be said to deviate from Jørgensen’s second poem as she depicts the protagonist’s encounter with Beatrice. Holm’s scene might be based on Dante’s Florence but the city is also simple and industrial, the encounter itself without any of the symbolism of Jørgensen’s (and Dante’s) association of Beatrice with fire and flames. 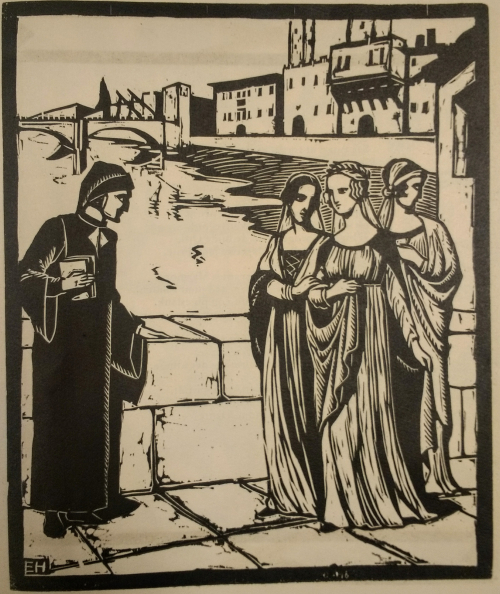 The third poem deals with Dante’s exile from Florence and the fourth with Dante and Beatrice’s ascension in Paradiso. 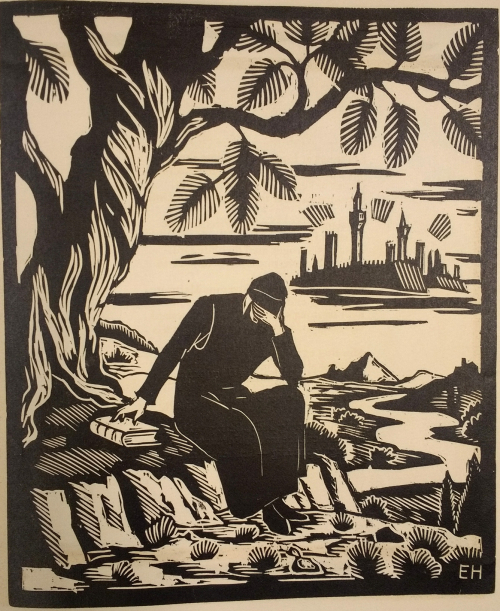 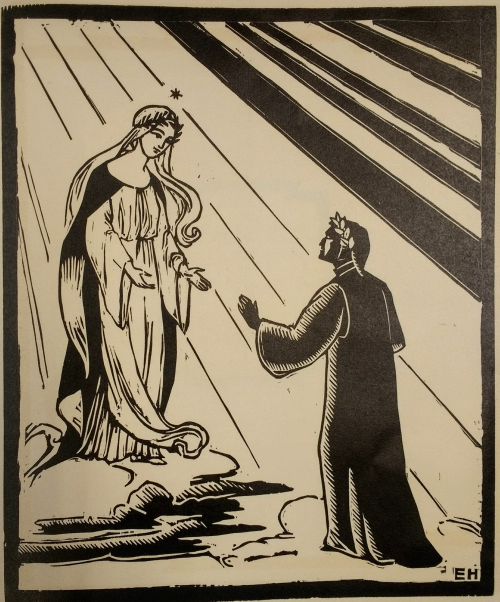 Holm’s illustrations here are accomplished without being remarkable but they can also be seen as preparatory for the more lavish, impressive and ultimately prize-winning linocuts for the later Divine Comedy edition. Unfortunately, we don’t yet have a copy of this but we’ll be keeping our eyes peeled for a fine edition!