In May 2000 the British Library held a one-day conference on the theme of foreign-language printing in London from 1500 to 1900, specifically printing by and for immigrants in London. The focus was on the languages of continental Europe, with papers on German, Dutch, Scandinavian languages, French, Italian, Spanish and Portuguese, Greek, Russian, Polish, and Hungarian printers and printing, which were collected into a book, published in 2002 as Foreign Language Printing in London. Long out of print, this volume has now been made freely available via the British Library’s research repository. Some of its articles offer a general overview of printing activity while others concentrate on particular periods, printers or publications. One thing we discover is that, apart from the special case of Latin, the foreign vernacular language most frequently printed in London was French, also the only one to appear in the 15th century. Italian, Spanish and Dutch material all first appeared in the 16th century while German, Portuguese and modern Greek made their debuts in the 17th century. Most languages show an upward trend over time, although the number of Dutch publications gradually declined from the 16th to the 18th centuries. However, none of the numbers are particularly large: only for French do figures reach into the thousands rather than hundreds or fewer.

Most printing in foreign languages in London began with language-learning aids: dictionaries, grammars, textbooks and phrase-books. The earliest such work was a French-English vocabulary printed in 1480 by William Caxton (who had himself started out as a foreign-language printer in Flanders where he produced his first book in English, The Recuyell of the Historyes of Troye). These works might be aimed equally at English learners of another language or at native speakers looking to learn English in their new home. Likewise the printing of foreign-language literature in London could appeal to an audience of language learners as well as native speakers, although as a rule literature remained more likely to be imported than printed in London. Nonetheless, there were printers and publishers who also had a role as ‘foreign booksellers’ in promoting foreign-language literature to Anglophone audiences and some, like the 18th-century German bookseller Carl Heydinger, also translated works into English. 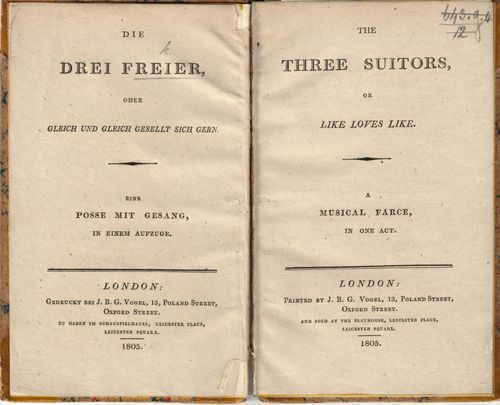 A bilingual German and English edition of the farce Die drei Freier / The Three Suitors (London, 1805; 1343.d.10), published by the London German firm of J. B. G. Vogel

Other foreign-language printing was aimed more specifically at foreign communities. A number of these were initially formed by those fleeing persecution. In earlier centuries this tended to be religious persecution, with Protestants from Catholic Europe in particular finding refuge in England (paralleled, of course, by English Catholics seeking similar refuge abroad). Printing religious texts was an understandable preoccupation for these groups, but was also typical of foreign communities in general since places of worship were usually among the first community meeting-places to be established by immigrant groups. Most of the examples in the book come from Christian denominations, but there was also printing by Jews arriving in England from the continent, notably the Sephardim from Spain and Portugal who established a synagogue in London in the mid-17th century and printed sermons, calendars and polemical works, mostly in Spanish. Later, especially in the 19th century, the refugees were more often fleeing political than religious persecution. Liberal and socialist exiles took advantage of Britain’s relatively tolerant climate and, in particular, its free press.

These persecuted groups often printed books, pamphlets and newspapers to be exported – sometimes smuggled – back home. Their efforts met with varying degrees of success, perhaps the greatest being that of the Russian-language newspaper Kolokol (‘The Bell’), published in London between 1857 and 1867, which circulated widely and was much read in Russia. Less influential when first published was the Communist Manifesto (Manifest der kommunistischen Partei), printed in London in February 1848; it was not until the 1870s that it began to be widely reprinted.

Not all immigrants, of course, were fleeing persecution. Many were scholars, tradesmen or workers of all kinds and classes, and many soon became assimilated into English life and society – one of the reasons why a career in foreign-language book trades in London was often precarious. The short lives of many foreign-language newspapers which were founded in 19th-century London offer one of the clearest pieces of evidence for the difficulty of maintaining an audience for foreign-language material. Nonetheless, foreign-language printing and publishing have continued in London through the 20th century and into the 21st, with the addition now of internet resources by and for the many communities from Europe – and of course beyond – in Britain. A more recent British Library project, the ‘Russia in the UK’ Web Archive Collection, showcases examples of this.

When Foreign Language Printing in London was published, the Internet was still far from the ubiquitous tool it has become today, and all forms of online publishing still in their relative infancy. It is gratifying that, nearly two decades later, the book can be freely accessed online, for it remains a valuable introduction to the topic and of potential interest to specialists and lay readers alike.