‘Humble books’: B. U. Kashkin’s wooden artist books at the British Library

The nonconformist artist and poet Evgenii Mikhailovich Malakhin, better known as B. U. Kashkin or later Starik Bukashkin (‘Old Man Bukashkin’), is a legendary figure in Ekaterinburg, the Russian city where he spent most of his adult life. Sporting a large bushy beard, wearing a t-shirt emblazoned with the words ‘I am a great Russian poet’, and carrying a balalaika, B. U. Kashkin could be found walking the streets and creating art for much of the 1980s and 90s. In recent years, the so-called ‘Bukashkin Trail’, a walk through the area where a small number of his murals remain intact, has even appeared on alternative English-language travel guides to the city. Yet, B. U. Kashkin remains relatively unknown outside of Russia or even Ekaterinburg. 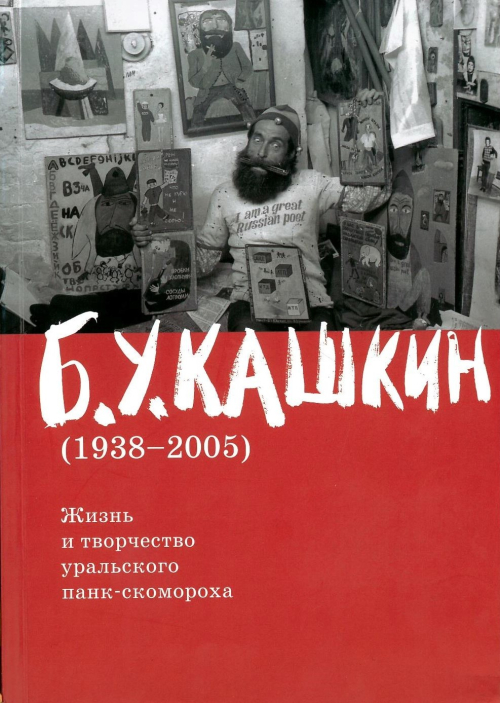 Born in Irkutsk in 1938, B. U. Kashkin studied engineering before moving to Sverdlovsk (now Ekaterinburg) in the early 1960s to take up a post as a senior engineer for an electricity company. Although he was interested in philosophy and the arts, it wasn’t until the 1970s that he began exploring a more creative path. As well as experimental photography, he also wrote and self-published poetry, and painted and worked with wood (including chopping boards). He initially adopted the pseudonym K. Kashkin, which sounds similar to the Russian word kakashka (meaning a little piece of shit). In the late 80s, this morphed into B. U. Kashkin – from the word bukashka (meaning a little bug or, metaphorically, an inconspicuous person).

The first exhibition of his work was held in the mid-1980s and he later founded an art collective, ‘Kartinnik’, which took its name from the Russian word for painting or picture – kartina (and likely also kvartirnik, the word used to describe musical concerts or performance art held in private apartments in the Soviet Union in the 1960s-1980s). The group’s philosophy was based on the idea of art as a form of communication and not a commodity to be sold. In fact, B. U. Kashkin gave most of his art away for free to passers-by in the street. 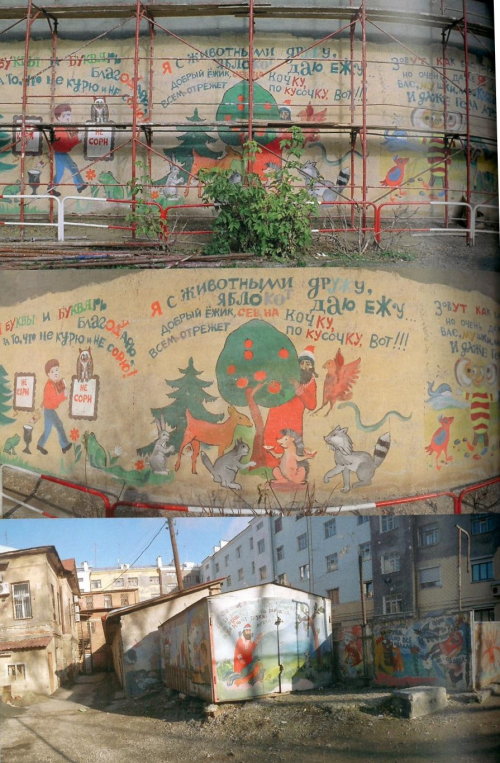 In the early 1990s, B. U. Kashkin expanded his canvas further, painting garages, rubbish bins, and fences around the city. Calling himself ‘the People’s Street Sweeper of Russia’ in a tongue-in-cheek jibe at the official People’s Artist title awarded by the State, his murals called for people to live harmoniously together and to take care of the city and nature. In this way, he was able to communicate his poetry and ideas with a wide, public audience. The performative aspect of B. U. Kashkin’s art has been likened to that of the skomorokhs, medieval East Slavic travelling street performers who sang, played musical instruments and entertained people with comic plays and acrobatic tricks. 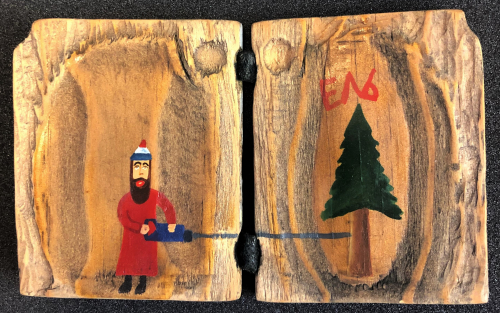 B. U. Kashkin also made wonderfully playful and naïve wooden books, two of which are now held in the British Library. In the smaller of the two books, he juxtaposes the wooden canvas with the act of chopping down a fir tree, an important symbol in Russian culture. He himself is the woodcutter, bearded and dressed in a red tunic and red, white and blue hat – an ensemble he wore in real life and which can be found throughout his art. Measuring just 6.5cm x 5.5cm, the book is entitled DRrrrr… (evoking the sound of the saw) and features the name of the ‘publisher’, skromnaia kniga (‘humble book’), on its cover. 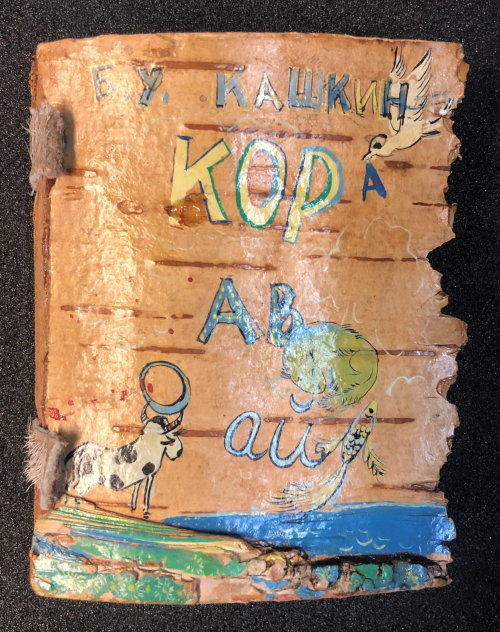 The second of B. U. Kashkin’s wooden books held by the Library is marginally bigger in size (9cm x 7cm!). Aptly titled Kora (tree bark), the cover features a dog, a cow, a bird and a fish, along with animal sounds. Once again B. U. Kashkin makes an appearance, this time with his infamous balalaika and an assortment of music-playing friends and animals. The books are part of a series B. U. Kashkin made using birch (also a symbol of Russian culture and beauty) and other types of bark in the early 1990s. 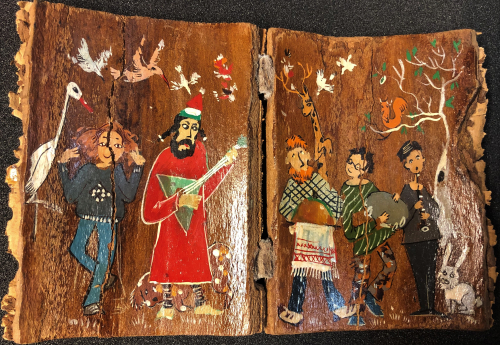 Following his death in 2005, staff and students of Ural State University worked to build the B. U. Kashkin Museum in the university. As well as holding rare artefacts and archival material related to B. U. Kashkin, the museum also serves to promote cultural projects and interdisciplinary research. The Ekaterinburg Museum of Fine Arts similarly collected artworks from different periods of B. U. Kashkin’s life and held an exhibition to mark what would have been his 80th birthday in 2018.