Mysterious, Fierce and Fragrant: a 15th-Century Encounter with a Civet

What would you do if you saw an animal in your garden which you’d never seen before? You might say, ‘It had the head like a cat’s and the body of a dog …’

This was the method used by European travellers and writers who had to describe the new fauna of the Indies.

Amongst the most remarkable things at the Indies of Peru, be the vicugnes, and sheepe of the countrie, as they call them, which are tractable beasts and of great profit. … Some thinke that the vicugnes are those which Aristotle, Plinie and others call capreas, which are wilde goats, and in truth they have some resemblance, for the lightnesse they have in the woods and mountaines, but yet they are no goates, for the vicugnes have no horns … These vicugnes are greater than goates and lesser than calves. Their haire is of the colour of dried roses, somewhat clearer (Purchas’s Pilgrims, cited Phipson 120). 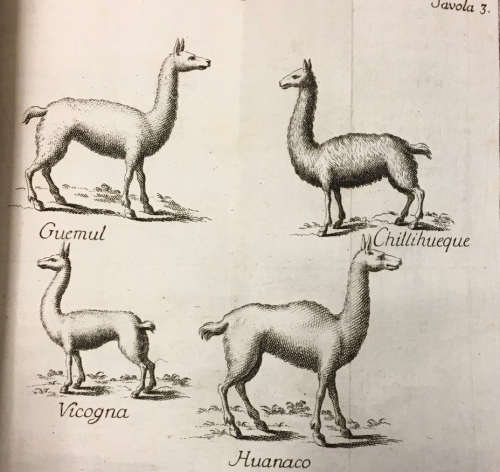 Nuremberg physician Dr Hieronymus Münzer, writing in Latin and calling himself Monetarius, described his travels in Spain in 1494-95, including a visit to the palace of Prince Henry (cousin of King Ferdinand the Catholic) in Valencia.

The prince, more given to leisure and enjoyment [otio et voluptate] than to war, has built by St Francis’s Church a house so proud and noble that there is nothing superior. All the rooms are hung with tapestries with coloured figures and the cloths are embroidered with gold.

And there he saw

a ‘gazella’, an animal larger than a fox; its head, mouth and ears are like an ermine’s; it is grey with whitish and dark patches; it has the tail and feet of a dog: a bad-tempered and fierce beast [animal colericum et furiosum est].

We understand what made it colericum et furiosum when we read on:

It was in a wooden cage, on a chain. Its keeper ordered it to be dragged by the head to the cage door, and pulling its hind legs lifted its tail and showed us its ‘priapus’ (for it was a male), and taking its testes, which were large, turned them inside out as one would turn a money bag. (Münzer’s three travelling companions were merchants, so they knew a thing or two about money bags.)

Thus there appeared two cavities, one on each testicle. Into one of them he introduced a small spoon of smooth glass, and three times extracted a quantity of sweet-smelling humour of civet about two drams [duarum dragmarum] in weight and anointed my hand with it, which continued to smell for a number of days.

The prince also showed them a number of birds, including

A starling of the colour of lasuri [lapis lazuli?] and blue, which he said could imitate various sounds, although I never heard it speak the hour we were there.

Münzer doesn’t say where the Prince got his civet from (they’re natives of Africa and Asia), but exotic animals were often used as diplomatic gifts: that was how Alfonso X of Castile-Leon came by a giraffe, a gift from the Sultan of Egypt (Crónica de Alfonso X, p. 28). So perhaps this was such a gift.

An alternative version of the civet from Icones animalium quadrupedum

Posted by European Studies at 10:09 AM