This week marks the 40th anniversary of the death of the Greek author Stratis Tsirkas, who commemorated the struggles of his country during and after the Second World War. 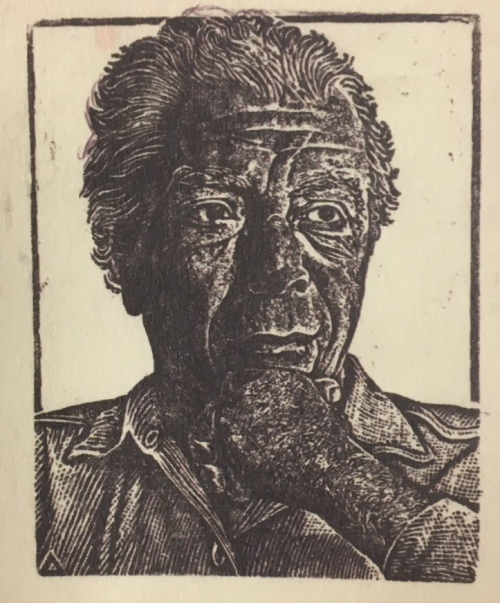 Born Yiannis Hatziandreas in Cairo, then a city with a substantial Greek community, on 23 July 1911, he received a commercial education but was an avid reader from an early age and began publishing both translations and original texts in journals while working as a factory manager in Upper Egypt. His time in the region inspired his first published collection of poems, Fellahin, which appeared in 1937. The following year he moved to Alexandria, where he became involved in literary and communist circles, and published more volumes of verse. His first collection of short stories appeared in 1944.

Tsirkas was actively involved in the Communist Party’s anti-fascist initiative and edited its journal, Hellēn (‘The Greek’). The 1944 mutiny of the Greek fleet and army and its brutal suppression became a major theme in his writing in the decades that followed. In 1958 his study of Cavafy, Ho Kavafis kai hē epokhē tou (‘Cavafy and his Era’) won the State Award for biography, and was followed by a work on another poet, George Seferis. His friendship with Cavafy was also the inspiration for Ho politikos Kavafis (‘Cavafy the politician’ (Athens, 1971) X.709/15555). 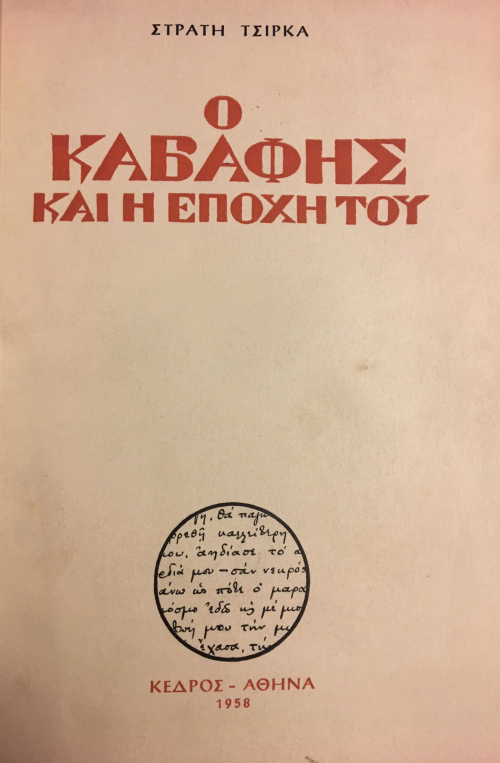 In 1961 he published Hē leskhē (‘The Club’) the first volume in his most famous work, the trilogy Akyvernētes politeies (‘Drifting Cities’), as a result of which he was expelled from the Communist Party. The second volume, Ariagnē (‘Ariadne’) followed in 1962, and the third, Hē nikhterida (‘The Bat’) in 1965, by which time Tsirkas had settled in Athens. The three novels take place in Jerusalem, Cairo, and Alexandria respectively, with an epilogue in mainland Greece, after the end of the Civil War. The historical thread linking them is the efforts of the Greek left-wing movement to resist both external and internal reactionary forces and to aid resistance within mainland Greece, culminating in the destruction of the Greek navy in the harbour of Alexandria, when the commanders declared their intention of joining the mainland resistance. At that time a speedy German withdrawal was not in the interests of the British, who were afraid of the increasing power of the left-wing resistance government, and they treated their Greek allies, who had fought alongside them against Rommel, as enemies.

The tragedy is seen through the eyes of the protagonist, Manos Simonidis, a communist intellectual divided between loyalty to the left-wing cause (though he cannot accept blind obedience to its rigid Stalinist precepts) and the lure of ‘decadent’ cosmopolitan values with their aura of existential meaninglessness. In the end, as a committed Greek, Manos can only choose action, although he despises his leaders and the cause itself is hopeless. 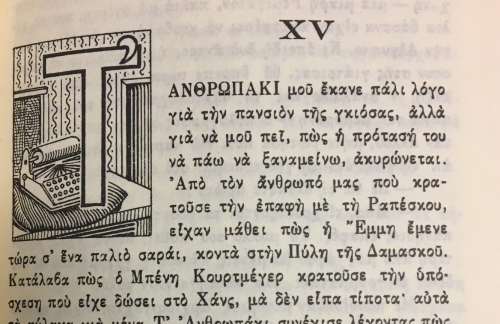 In Hē leskhē, Manos, hiding in a Jerusalem pension run by a German-Jewish refugee, falls in love with Emmy, the wife of an Austrian minister-in-exile, but loses her to another man and is recalled to action by his party's ideological leader, ‘The Little Man’, who unscrupulously uses others for his own ends under the pretext of ideology. In Ariagnē, wounded in a bomber attack, he is sheltered by Ariagne Saridis, head of a working-class family in a poor district of Cairo, and continues to write pamphlets. Ariagne’s family is a microcosm of the turbulence outside; some of its members belong to the right, others to the left, some are black marketeers, and some fight in the regular army or the resistance. She gives Manos the strength he requires to carry on with his mission, and in Hē nikhterida, after surviving a forced march through the desert, he arrives in Alexandria, and encounters Nancy Campbell, a Scottish noblewoman who becomes active in the resistance, before participating in the naval uprising. The story ends with the crushing of the revolt and the realization of the movement’s members that civil war is now inevitable.

In the coda, the survivors gather in Thessaloniki to hold a wake for their comrades who were tortured, executed or killed during the Civil War and the subsequent right-wing reign of terror. All the best men are dead; the women are left to mourn, struggling to survive and raise their children alone.

Tsirkas actively opposed the dictatorship, and during the rule of the colonels he devoted himself to translation. When censorship was lifted he played a leading part in producing the anti-junta 18 Texts and New Texts, and contributed to the anti-dictatorship journal Synechia.

Hē chamenē anoixē (‘The Lost Spring’), published in 1976 and set in Athens, was intended to be the first part of a new trilogy which Tsirkas never completed. Its hero is a left-wing refugee returning to the city after the tumultuous events of 1965, and it is fascinating to consider how Tsirkas would have developed the theme – and indeed, had he lived, how he would have described the collapse of the Greek economy in the next century. No doubt he would have continued to sum up his country’s future in the words, ‘Wherever there’s suffering and sweat and tears, there’s humanity, isn’t there?’