Friedrich Hölderlin, whose 250th birthday we mark today, is in many ways the very model of a tragic Romantic poet and tormented genius, his life marked by loss, hopeless love, struggles for recognition, and eventually madness. Born in the Swabian town of Lauffen am Neckar in 1770, he lost both his father and stepfather at an early age. His mother hoped he would enter the church and he studied at seminaries in Denkendorf, Maulbronn and Tübingen, where his friends included G.F.W. Hegel and Friedrich von Schelling.

By the time he began his studies at Tübingen Hölderlin had already begun to write poetry and to reject the idea of a church career. After graduating in 1793 he instead sought employment as a private tutor, and moved to Jena to be close to Schiller, whom he had revered since first reading Don Carlos. His first job did not last long and he then enrolled at the University of Jena for a short time, before leaving the town in haste in 1795. He next found work as tutor to the son of a Frankfurt banker, Jakob Gontard, and fell in love with Gontard’s wife Susette. Their relationship played a crucial role not only in Hölderlin’s personal life but also in his creative work. Susette is idealised as ‘Diotima’ in a number of his poems and in his novel Hyperion. 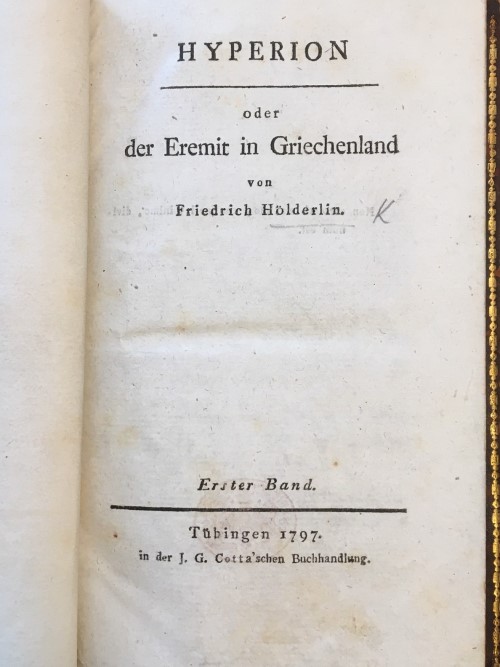 When Gontard discovered the relationship, Hölderlin was dismissed and fled to Homburg where he tried to make an independent living as a writer. Schiller helped him to place some poems in literary journals and supported the publication of Hyperion, but later turned against Hölderlin’s work. A plan to start a literary journal foundered, and Hölderlin remained largely dependent on his mother for funds. Eventually he again took on teaching posts, first in Hauptwil in Switzerland and then in Bordeaux, but neither lasted more than a few months. The reasons are unknown, but his increasingly fragile mental health might have been a contributory factor: on his return from Bordeaux in June 1802 his friends were shocked by his confused and neglected state. Around this time he was further distressed by the news of Susette’s death.

Hölderlin moved back to his mother’s house where he translated works by Sophocles and Pindar and, under the influence of the latter, started to compose a series of hymn-like poems whose imagery combined the religion of ancient Greece with Christianity. In 1804 he returned to Homburg, nominally as court librarian, a sinecure acquired for him by an old Tübingen friend, Isaac von Sinclair. When Sinclair was tried for treason the following year, Hölderlin also fell under suspicion, but by this time his mental health had irrevocably broken down, and he was deemed unfit to stand trial, and was committed to an asylum. In 1807 he was released, and taken into the home of Ernst Zimmer, a carpenter in Tübingen, who had read and appreciated Hölderlin’s poetry. Hölderlin remained in the care of the Zimmer family until his death in 1843, occupying a room in a small tower overlooking the river Neckar, now preserved both as a museum and a monument to the poet. For most of his own life Hölderlin’s work was largely unknown and unappreciated. Although some of his poems appeared in literary journals and almanacs, they were generally not well received. His only independent published work was Hyperion. It was not until 1826 that an edition of his poems was published, partly thanks to the advocacy of Wilhelm Waiblinger, a young writer who visited Hölderlin while studying in Tübingen. In the years that followed, Hölderlin became something of a tourist attraction, due not least to Waiblinger’s published depictions of him, but his own work remained largely neglected.

It was only in the early 20th century that interest in both the writer and his work began to grow. After the rediscovery and publication of some of his Pindar translations in 1911 Hölderlin’s work was eagerly taken up by the circle of writers around the poet Stefan George. The first complete critical edition of his works was published between 1911 and 1923 (BL 012251.f.3). Writers and critics began to truly appreciate the power and beauty of Hölderlin’s poetry and the originality of his fusion of ancient religion and Christianity with a Romantic evocation of nature. 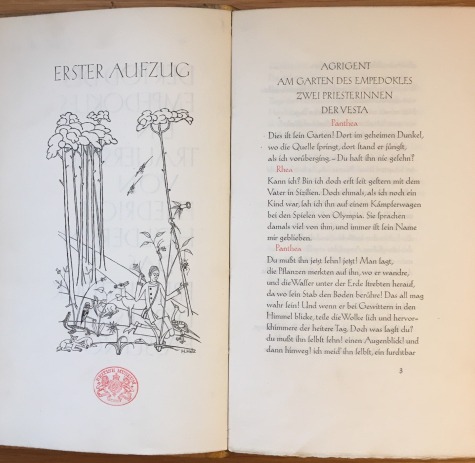 Hölderlin’s frequent themes of alientation and loss, and of the longing to restore a harmonious relationship between man, nature and divinity perhaps spoke more to the 20th-century mindset than to the poet’s own contemporaries, and the fragmentary and much-revised nature of his later works seemed to 20th-century poets and thinkers less the products of a confused mind and more a reflection of the difficulty of communication. Composers and artists have also drawn inspiration from his work, including the short and fragmentary pieces he wrote during his years with Zimmer. As well as being recognised for his literary works and translations, Hölderlin’s influence on philosophy, especially that of his Tübingen friend Hegel, has been increasingly acknowledged.

In an echo of his own life, Hölderlin’s anniversary this year has been somewhat overshadowed by the celebrations of Beethoven’s 250th birthday. Beethoven never set any of Hölderlin’s works to music, although in 2018 the composer Dieter Schnebel combined the work of both, linking the ‘Schiksalslied’ (‘Song of Fate’) from Hyperion with the concept of fate in Beethoven’s Fifth Symphony. But the British Library will be celebrating Beethoven in style later this year, so let today be Hölderlin’s alone.

Posted by European Studies at 3:30 PM