On 13 March, the British Library are hosting two events under the banner of Nordic Comics Today. In the afternoon, we will welcome Kaisa Leka and Karoline Stjernfelt to showcase their work. Kaisa will speak about the life of a disabled woman in the world today, and how comic art responds to disability, while Karoline transports us to the 18th-century Danish royal court through her prize-winning graphic history I Morgen Bliver Bedre (‘Tomorrow will be better’). The event will be introduced by Dr Nina Mickwitz from the University of the Arts, who’ll ground us in contemporary comics cultures in the Nordic region. 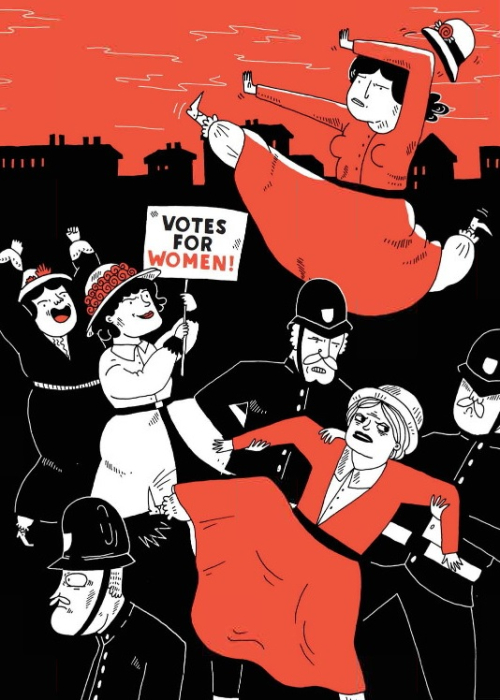 ‘Votes for Women’ from Marta Breen and Jenny Jordahl, Women in Battle: 150 Years of Fighting for Freedom, Equality and Sisterhood (London, 2018) ELD.DS.339036

In the evening we turn to feminism and welcome best-selling author Marta Breen to talk about Women in Battle, the story of fearless females in the continuing journey towards rights for women today (created in collaboration with illustrator Jenny Jordahl and translated into English by Sian Mackie). Marta will be in conversation with Kaisa Leka and UK Comics Laureate Hannah Berry, as they discuss the power of comics and graphic literature to engage people around social justice. 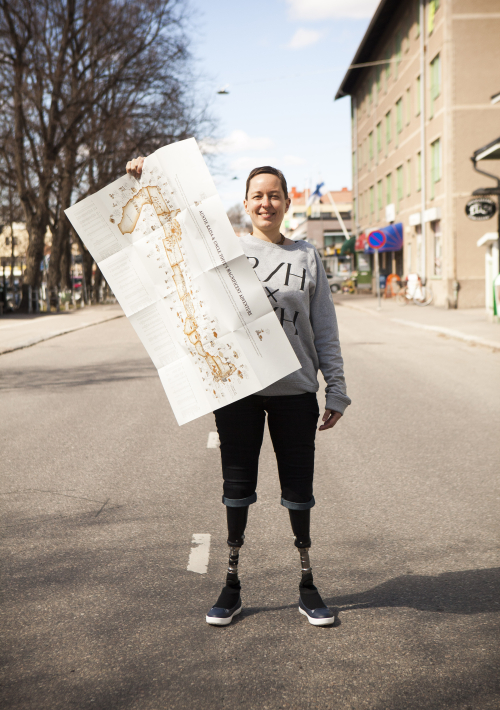 A photo of Kaisa Leka from her trip around the U.S.A. reproduced in Imperfect (Porvoo, 2017), awaiting shelfmark

There are some tickets remaining for both events. The afternoon is free to attend but still requires a ticket. We are also delighted to be able to display parts of the Hero(ine)s exhibition, first shown at the University of Cumbria and the Lakes International Comic Art Festival in 2018, which features iconic comic heroes re-interpreted and reimagined in their female form. This can be seen all day at the Knowledge Centre. 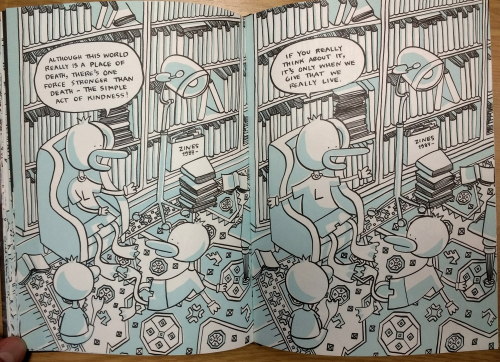 Comics and graphic novels certainly have a place amongst the Library’s universal and international collections, especially given the emergence of Comics Studies as an academic discipline in recent years. That’s not to say comics needed rehabilitating through academic approaches. It might be best to say, with Douglas Wolk, that comics are not a genre but a medium, and that graphic art cuts across genres. Also, the ubiquity of images in the internet age and the implications on reading habits go hand in hand with the fairly recent rise of graphic literature. So, if you want to understand the world today, a task which the BL’s collections are surely there to serve, then you need to read some comics! 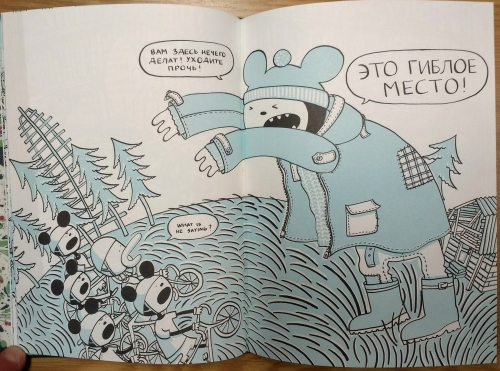 also from Place of Death

Let’s take a look at the work of our featured authors. Kaisa Leka, a Puupäähattu prize-winning Finnish artist and adventurer, has created numerous innovative books with her partner and ‘faithful sherpa’ Christoffer Leka. Imperfect (awaiting shelfmark) is a beautiful travel diary about their trip across the U.S.A. made up of the postcards they sent to Christoffer’s nephews and niece every day. Place of Death is a sort of parable about ‘fear and the kindness of strangers’, the characters being the authors’ (plus families’) alter egos. 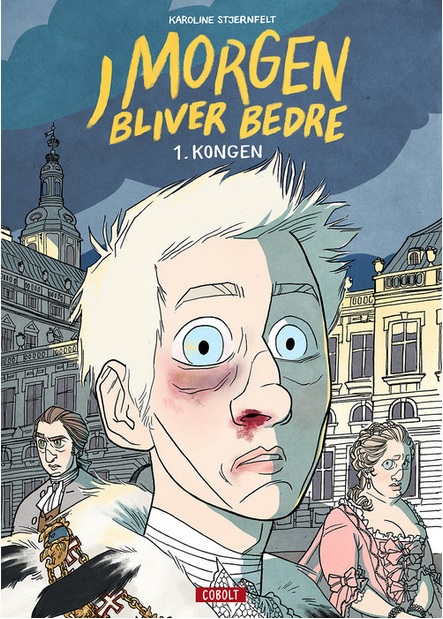 Karoline Stjernfelt’s I Morgen Bliver Bedre won the best debut category of both major Danish comics awards, the Ping Award and the Claus Delauran Award. To be published in three parts, ‘The King’, ‘The Queen’ and ‘The Doctor’, the exquisitely illustrated books take us to the late 18th century and the reign of Christian VII. The German royal physician, Johann Friedrich Struensee, wielded increasing influence in the court, having an affair with the Queen Caroline Matilda, and eventually becoming de facto regent in 1770. I Morgen Bliver Bedre captures that political chaos and the splendour of the court. A ball scene from I Morgen Bliver Bedre

Marta Breen and Jenny Jordahl’s Women in Battle tells the story of women’s rights and we’re fortunate to hear about it just after International Women’s Day and just before the British Library opens its Unfinished Business: The Fight for Women’s Rights exhibition. It sketches 150 years of struggle through figures such as Sojourner Truth, Harriet Tubman and Malala Yousafzai. Marta and Jenny Jordahl have previously collaborated on the books 60 Women you should know about and The F Word, while Marta has also just published Hvordan bli (en skandinavisk) feminist (‘How to be (a Scandinavian) feminist’) (awaiting shelfmark). 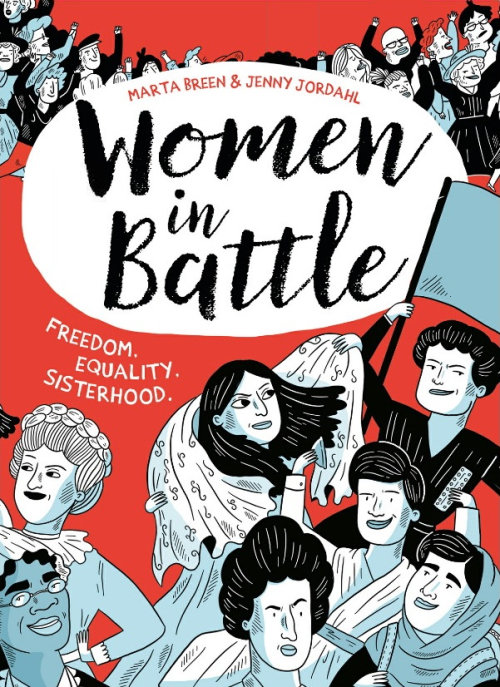 Cover of Women in Battle

Last but not least, we should definitely also say a word about our wonderful chairs for the events, Nina Mickwitz and Hannah Berry. Nina’s monograph Documentary Comics: Graphic Truth-telling in a Skeptical Age (awaiting shelfmark) shows the documentary potential of comics through early 21st century non-fiction examples. She has recently co-edited the collections (with Dr Ian Hague and Dr Ian Norton) Contexts of Violence in Comics and Representing Acts of Violence in Comics, and is currently interested in mobilities and negotiations of social norms and identities in comics, as well as the transnational mobilities of comics themselves. 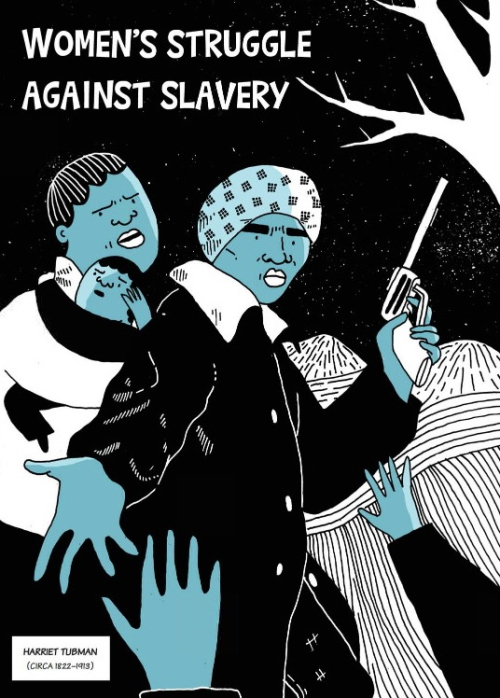 Depicting women’s struggle against slavery in Women in Battle

Hannah Berry is the UK Comics Laureate and her graphic novel Livestock won the Broken Frontier Award for Best Writer. Check that out as well as her two previous graphic novels Britten and Brülightly and Adamtine here at the Library.

We look forward to introducing you to these exciting creative voices and stay tuned for more Nordic events at the library over the coming year!