Bringing the News in Revolutionary Berlin

During the revolutionary year of 1848 printed placards and broadsides were a vital means of communication, both official and unofficial. The British Library holds collections of such material and other ephemera of the period from various European cities, including four volumes from Berlin (1851.c.4-7). Obviously such placards – particularly the official proclamations – were intended for posting on walls for public information, but they were also sold in the street.

In Berlin the ‘flying booksellers’, boys who hawked broadsides along with newspapers, journals and pamphlets around the city, became a familiar sight, detested by some, but viewed by others with affection. The writer Robert Springer later described them as:

Boys of the lower class, who used to sell cakes, flowers or matches, or simply to beg … would surround the printing-shops … in order to deliver the fresh goods as quickly as possible. … Thus the refined spirit of the Berlin street-urchins came into close contact with ephemeral literature, and it was not uninteresting to see the little good-for-nothings now, out of political and commercial enthusiasm, using their wares to practise the reading that they had never settled to at school before selling them in the most original way.

A verse parody of the flying bookseller’s ‘most original’ selling technique suggests the mixture of advertising, patter and exaggerated claims that the boys might have used. 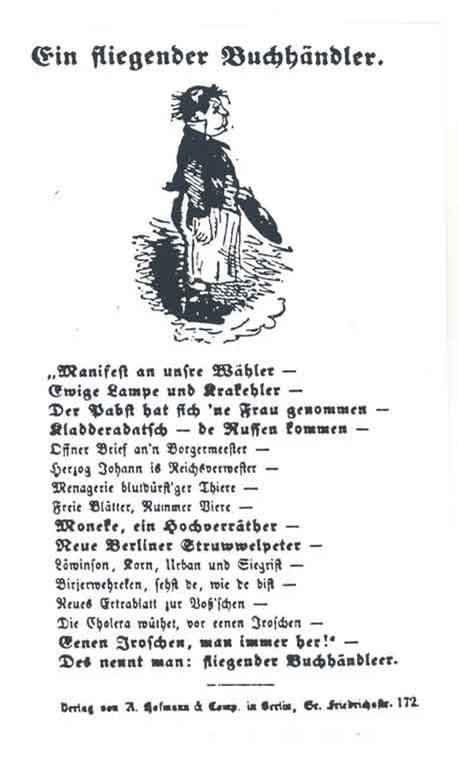 In translation: ‘Manifestos to our voters / Ewige Lampe und Krakehler / The Pope has taken a wife / Kladderadatsch – the Russians are coming / Open letter to the Mayor / Duke Johann’s Imperial Regent / Menagerie of bloodthirsty beasts / Monecke, a high traitor / Neuer Berliner Struwwelpeter / Löwinsohn, Korn, Urban, Sigrist / Civic guardsman, see what you’re like  / New extra edition of the Vossische / The cholera’s raging, for one groschen / One groschen, hand it over!’ / That’s what they call: flying bookseller.

As well as the tall stories about the Pope’s marriage and a Russian invasion, the verse reflects real events and can be dated from these to sometime in the first half of July 1848. The Austrian Archduke Johann was appointed ‘Reichsverweser’ (Imperial Regent, i.e. the provisional head of the new government to be created by the Frankfurt Parliament), on 29 June. Eduard Monecke, a student, was imprisoned for lèse-majesté on 30 June, while Löwinsohn (or Lövinsohn), Korn, Urban and Siegrist (or Siegerist) were tried in early July for instigating the previous month’s attack on the Berlin Arsenal, with sentences passed on the 15th. The verse also quotes the titles of genuine political or satirical journals: Die ewige Lampe, [Berliner] Krakehler, Kladderadatsch, Freie Blätter and Neuer Berliner Struwwelpeter, and the ‘Voss’schen’ refers to the venerable Vossische Zeitung, the oldest newspaper in Berlin. There are even references to two broadsides Grosse Menagerie blutdürstiger Thiere and Bürjerwehreken, siehste wie De bist? The first is a satire depicting European monarchs as ‘bloodthirsty beasts’ on display in a zoo, and the second is a comic ‘curtain lecture’ in Berlin dialect, supposedly addressed to a member of the recently-formed Civic Guard (Bürgerwehr) by his wife, who is unimpressed with his new status. 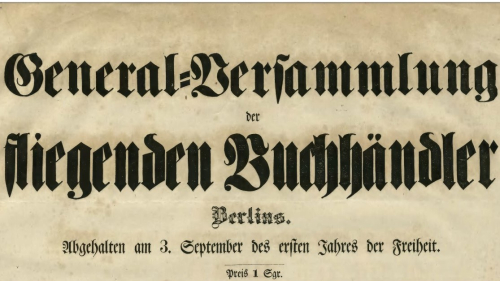 The life of the flying bookseller was not an easy one. As some of the material they distributed could be classed as seditious, the boys risked being stopped by the police and having their wares confiscated. In a satire imagining a meeting of flying booksellers to discuss their rights, one of the speakers calls the police ‘our greatest enemy’. Another satire, this time on the daily life of a policeman, shows two constables accosting a flying bookseller as he leaves a stall carrying broadsides to sell: however, the constable who narrates this tale in a supposed letter to his sweetheart says that he is enclosing some of the confiscated literature for her as it is ‘very nice to read.’ 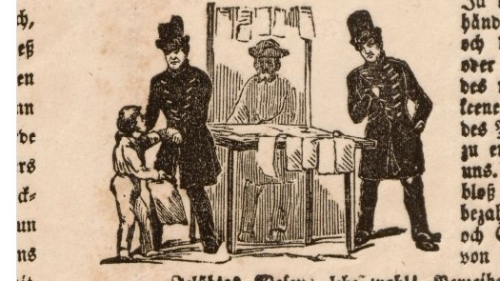 When the revolution was defeated in November 1848, the number of satirical and overtly anti-government broadsides and journals fell sharply. A cartoon published the following year in the satirical weekly Kladderadatsch, one of the few such titles to survive, shows a figure representing the journal in a graveyard among the tombs of his deceased contemporaries. Three other titles named in the verse quoted above are among them: Freie Blätter, Die ewige Lampe and Berliner Krakehler. 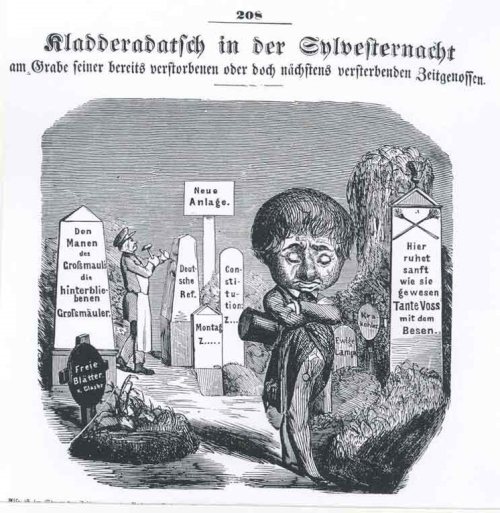 ‘Kladderadatsch in der Sylvesternacht’, cartoon from Kladderadatsch, 23 December 1849, P.P.4736.h. (The entire run of the journal is available online via the University of Heidelberg.)

With the vibrant print culture of the revolution quashed, the flying booksellers no doubt returned to selling their previous wares, but perhaps with a raised political conscience and a greater enthusiasm for reading.

Major collections of broadsides, pamphlets and other ephemera from the 1848 Revolution in Berlin and elsewhere in Germany are available online from the Zentral- und Landesbibliothek Berlin and the Goethe-Universität Frankfurt am Main