We are delighted to announce that the British Library, in collaboration with the University of Bristol, is offering a fully-funded PhD studentship (fees and living allowance) on the theme: The Michael Hamburger Archive: Mediating European Literature. The project will be co-supervised by Steffan Davies and Rebecca Kosick (University of Bristol) and Rachel Foss and Pardaad Chamsaz (British Library). 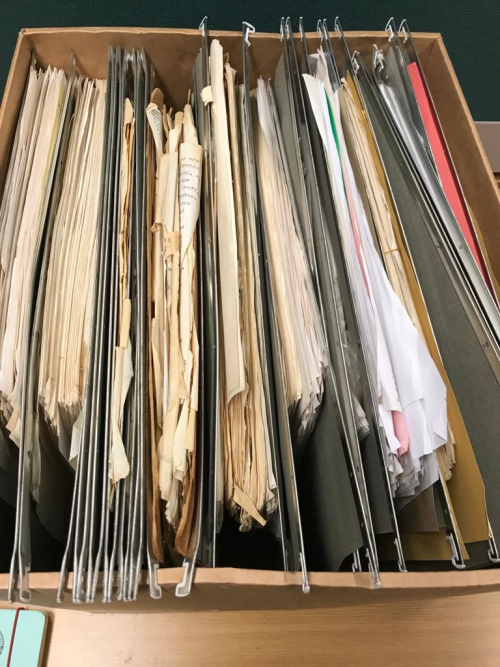 One of the 94 boxes of drafts and correspondence from the archive. Photo by Jen Calleja

In 2012, the British Library acquired the archive of Michael Hamburger (1924-2007), one of the foremost mediators of modern European—mainly German and Austrian—literature to readers in English. Born into a German family of Jewish descent, Michael Hamburger came to the UK as a refugee in 1933. He became a poet, a literary critic, and the translator of a very broad range of writers, including Hölderlin, Goethe, Rilke, Celan, Brecht, Ernst Jandl, Hans Magnus Enzensberger and W. G. Sebald. 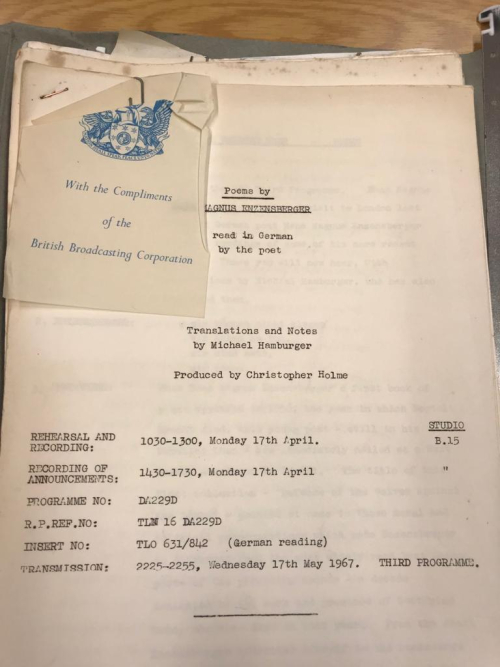 Copy of BBC schedule for a recording of Hans Magnus Enzensberger’s poems in 1967. Translations and notes by Michael Hamburger. Photo by Jen Calleja

The Archive comprises 94 boxes of drafts of translations, poems and essays; correspondence with writers, publishers and friends; and diaries and personal reflections among many other documents. The Collaborative Doctoral Partnership (CDP) offers a unique opportunity to illuminate processes that have been at the core of Anglo-German relations in the past three-quarters of a century: the translation of literature; the writing of literary criticism; and reflection on translation and cultural transfer. Equally, the existence of such a full archive makes this an outstanding opportunity for Translation Studies research.

Alongside the PhD research, the studentship will involve a significant contribution to the organisation and cataloguing of the archive, and to the evolving approaches to and understanding of translators’ archives in the Library. The research could approach the Archive from many angles, focusing on, for example: Michael Hamburger as translator; a methodology for archive-based translation studies; connections between the creativity of the poet and that of the translator; a critical reappraisal of translation as cultural mediation; and the (in)visibility of the translator figure. 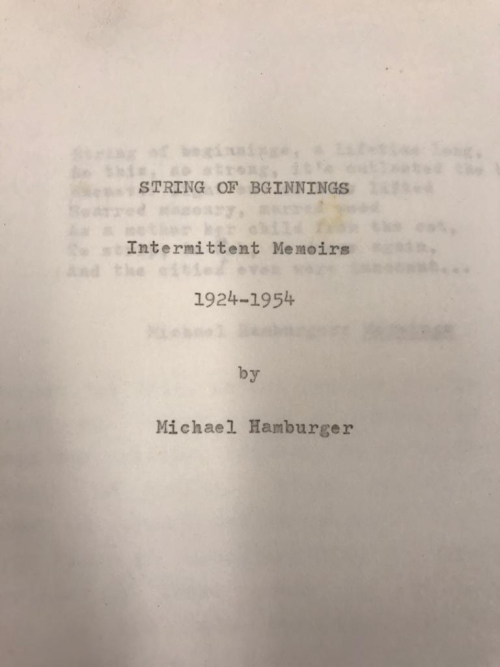 The project is part of the Arts and Humanities Research Council’s Collaborative Doctoral Partnership (CDP) scheme, which offers doctoral studentships as part of collaborations between a Higher Education Institution and an organisation in the museums, libraries, archives and heritage sector. The doctoral grant will cover fees and pay the student a stipend; the British Library will also provide a research allowance of up to £1,000 a year for agreed research-related costs. In addition to being able to draw on the researcher development opportunities and postgraduate community in both the School of Modern Languages and the Bristol Doctoral College at the University of Bristol, the successful student will become part of a vibrant cohort of collaborative doctoral researchers at the British Library, and benefit from staff-level access to its collections, resources and training programmes. 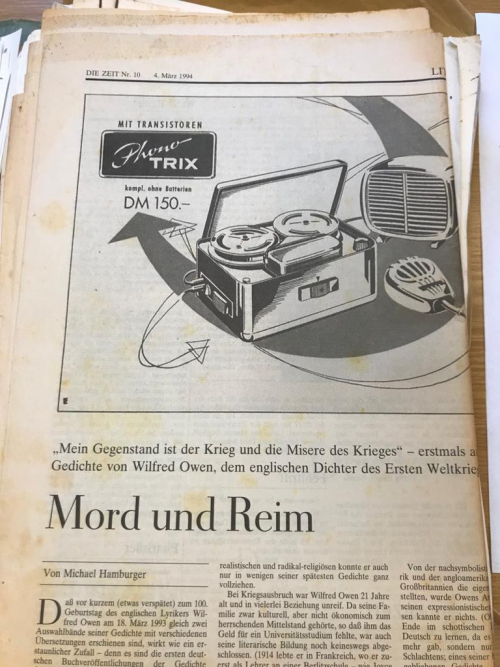 The deadline for applications is 5pm on Monday 1 June. Applicants must have a very good reading knowledge of German and meet the standard UKRI residency requirements for Training Grants. The successful student will be expected to begin on 1 October 2020.

For further details of the studentship, and the CDP programme, see the British Library Research Collaboration page or visit the University of Bristol website.

If you are interested in applying, you are welcome to contact the following for an informal discussion about this opportunity in advance of submitting an application: Steffan Davies (steffan.davies@bristol.ac.uk), Rebecca Kosick (rebecca.kosick@bristol.ac.uk), Pardaad Chamsaz (pardaad.chamsaz@bl.uk) and Rachel Foss (Rachel.Foss@bl.uk).