This grain of sand is nevertheless a whole world: Literature of The Faroes

Over thirty years ago, it might have been possible to say that the Faroes were only on the radar of ‘ornithologists, folklorists, epidemiologists even […] But among the anthropologists, “excursionists” par excellence, the Faroes are practically unknown’ (Wylie). Now, with the help of publicity ventures like the viral Google Sheepview campaign, the Faroes are comparatively well-trodden by the average off-the-beaten-track traveller. The Islands now also boast a reputation for fine-dining and, in the political sphere, are fast attracting ‘strong interest from the world’s most powerful states’, along with other North Atlantic territories. But, where’s Faroese literature in all this? It is safe to say that Faroese writers have a difficult task to become known beyond their shores. As the Faroese nominee for the 2020 Nordic Council Literature Prize, Oddfríður Marni Rasmussen, writes, ‘only a half-dozen or so can make a living off their writing. And in order to do that, a writer has to be translated into a bigger language, but publishing houses in other countries do not want to spend money on some book from the Faroe Islands.’ 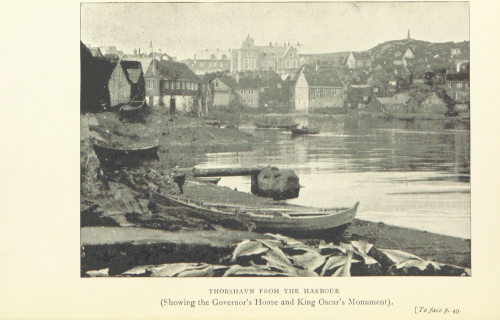 Marni Rasmussen’s award winning Ikki fyrr enn tá (Not until then) is available at the library (YF.2020.a.207) along with another 11 of his works, mostly poetry collections. He also co-edits the literary journal Vencil, which, thanks to the translations of Marita Thomsen, put out an English-language issue for the first ever Faroe Islands stand at the Frankfurt Book Fair in 2011. One legacy of that initial promotional step-change was the FarLit organisation, which has since been devoted to promoting awareness of Faroese literature internationally. 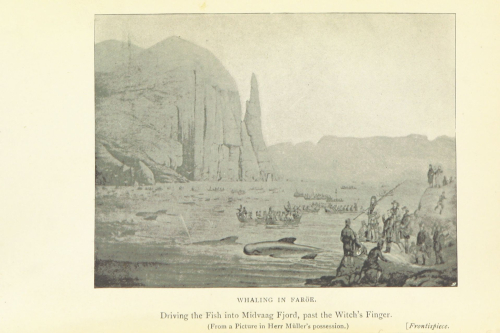 Whaling in the Faroes, from Jeaffreson (above)

The belatedness of this international orientation has a lot to do with the relative novelty of not only a Faroese literary culture but also of a standardized Faroese written language. The first Faroese novel is traced back to 1909 and Regin í Líð’s (Rasmus Rasmussen) Bábelstornið (Tower of Babel) and the first poetry collection, J. H. O. Djurhuus’s Yrkingar (‘Poems’) followed in 1914 (X.900/2189., 1961 edition). The library also holds a copy of Regin í Líð’s 1910 Plantulæra, which is the first Faroese botany textbook (X.319/2657.) 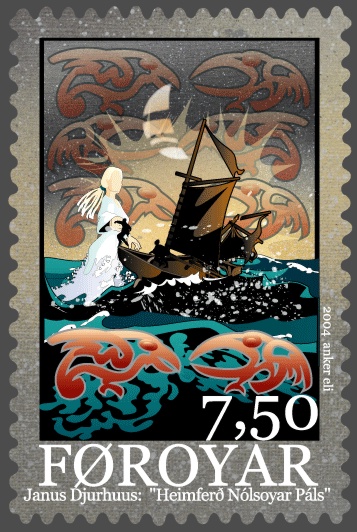 Stamp from 2004, one of ten commissioned in honour of J. H. O. Djurhuus’s poems, designed by Anker Eli Petersen. This one depicts the Return of Nolsoyar Páll, the Faroese national hero. (Public Domain)

The Faroese language established an orthography courtesy of Venceslaus Ulricus Hammershaimb in 1846, with the help of many philologists engaged in the linguistic independence of the Islands as part of a broader claim to self-determination. That did not immediately spark a wave of literary expression in the Faroese language, however. In many ways, the creation of a Faroese written language reinforced the separate domains in which people used Danish and Faroese. As Wylie writes, ‘In 1846 the Faroes acquired a written language in which little was written. At about the same time, they attained a “national” identity even as they were reduced to a Danish province’. 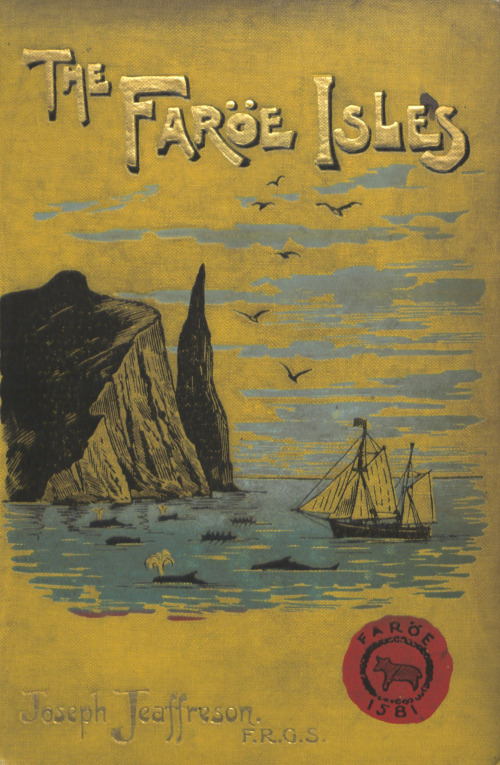 Yet, that does not mean Faroese culture was until recently an un-literary one, in fact quite the opposite. Oddfríður Marni Rasmussen admits ‘the legacy of our written literature, with only 5,000 published works, only goes back a hundred years or so’, but underlines the fact that ‘our oral literary tradition, which encompasses ballads, legends, and myths, is ancient and so just as significant to us.’ There are four different of oral literature: kvædir (famous heroic ballads), tættir (satiric ballads), both verse forms; and ævintyr (folktales) and sagnir (legends with a more matter-of-fact tone, often addressing local characters and stories), both prose. This oral tradition cannot simply be seen as a phase along the path to a twentieth century written literary culture but should be understood as the fundamental basis of a distinct Faroese culture. It was the ‘institutionalized telling of tales [that] insured the survival of Faroese as a literary language’ (Wylie). 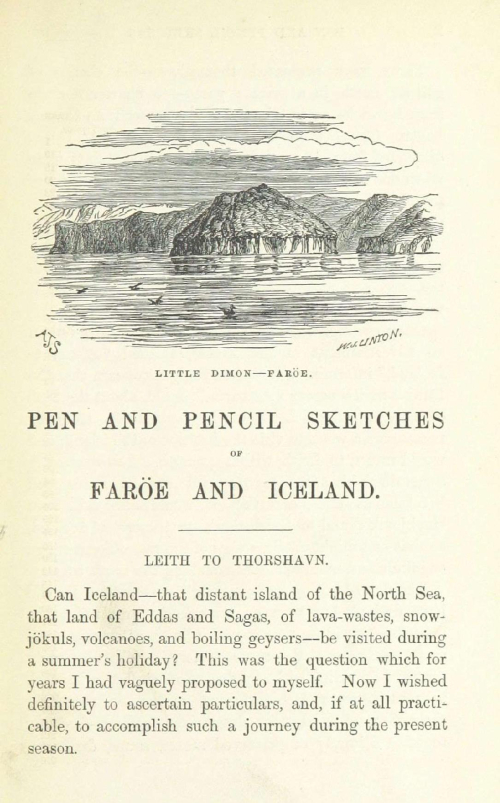 It is no coincidence that the first major published works in the Faroese language were collections of kvædir. Of course, these heroic ballads were collected and reproduced in even earlier publications, but these editions were rendered in Latin or Danish. Even before Hammershaimb’s orthography, there are examples of Faroese stories in the native language. Hans Christian Lyngbye’s Færoiske Qvæder om Sigurd Fofnersbane og hans Æt (Randers, 1822; 1462.h.7.) is a parallel Faroese-Danish edition of possibly the most popular kvædi about Sigurd (Siegfried) the dragon-slayer and was published as early as 1822, making it the earliest Faroese book. Ten years later, Johan Henrik Schrøter, already integral to Lyngbye’s kvædir book, published the first Faroese translation of the Icelandic saga about the Christianization of the Faroe Islanders, the Færeyinga Saga (590.h.23). Both of these are available to read online thanks to the Google Books digitisation project. 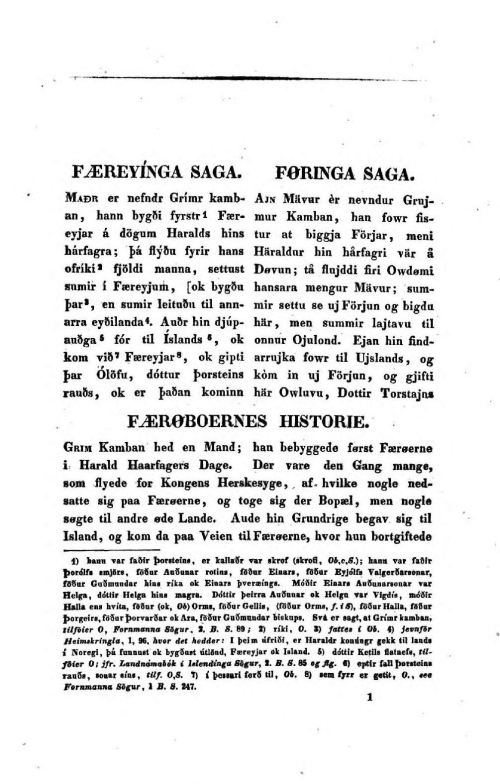 According to Wylie it was the 1890s that brought the works that would help catalyse the Faroese literary tradition. Hammershaimb’s Færøsk Anthologi (1891) and Jakob Jakobsen’s Færøsk Folkesagn (1896) (both at Ac.9057) ‘were not just scholarly exercises […] They were also specifically Faroese cultural monuments, grounding modern Faroese culture in written recollections of traditional life […] their appearance was exceedingly timely; for by the 1890s, memorializing the past was felt to be an urgent task, especially, perhaps, in [the capital city of] Tórshavn’. The creation of foundational Faroese editions of local literary history, much like the earlier examples of National Romanticism across Europe, went hand-in-hand with a renewed sense of nationhood, accelerated by the industrialization and urbanization of society in the 1880s.

We shouldn’t forget that, alongside the local development of a written literary tradition, the Faroes have captured the imagination of those beyond and many early texts present in the British Library collections mention the Islands. The Icelandic scholar, Arngrímur Jónsson, points to the many sheep on the Faroes in both his Brevis Commentarius de Islandia (1593) (572.b.2.) and Crymogæa (1610) (151.c.24.), noting that it is the sheep (før or fær in Old Norse) that give the Islands their name. The first comprehensive history and geography, Færoæ & Færoa reserata, was published by Lucas Jacobsen Debes in 1673, and, again, is available online. Debes’ account was of enough interest to an English audience for it to be translated three years later under its full title, Færoæ & Færoa reserata, that is, A description of the islands & inhabitants of Foeroe being seventeen islands subject to the King of Denmark, lying under 62 deg. 10 min. of North latitude: wherein several secrets of nature are brought to light […] (London, 1676; 980.d.12). The 19th century also saw a rise in travel literature to the North Atlantic, along with publications associated with scientific expeditions in the region, such as Charles Frederic Martin’s Voyages de la Commission Scientifique du Nord, en Scandinavie, en Laponie, au Spitzberg et aux Feröe (10281.g.7-16.). 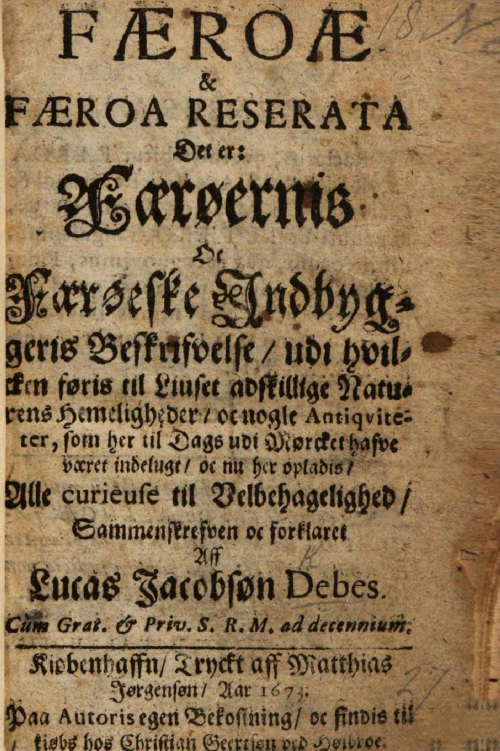 The Faroes’ literary traditions are therefore both long-established and yet still novel; they are also both local and yet inextricably tied to Denmark and the wider world. These tensions have defined the distinctiveness of Faroese literature. Trygvi Danielsen, also known as the Faroese rapper Silvurdrongur (‘The Silver Kid’) and the most recent recipient of the Ebba Award, touches on the novelty of Faroese when he describes his practice as orðsangur, or wordsong, and how his writing ‘focuses towards the language itself, playing with words, rearranging, reinventing, reinvigorating, re-examining the language and how we use it’. This is no doubt possible in many languages but perhaps there is something in the artist’s proximity to the comparatively recent construction of a Faroese written language that allows a certain freedom of linguistic creativity. Danielsen’s collection of poetry, fiction and music, The Absent Silver King (2013), was also recently acquired by the library and is currently awaiting cataloguing. 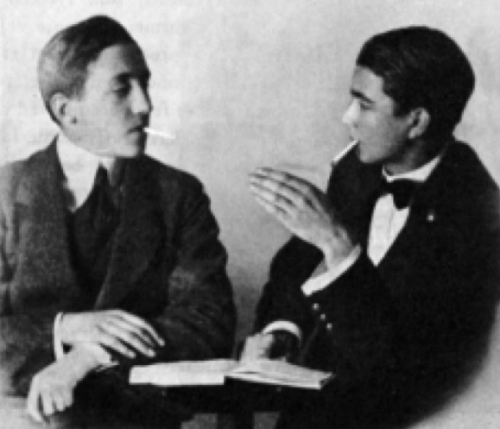 The second tension, between the local and the national, the Faroese- and the Danishness of society, is best encapsulated in the most significant Faroese literary figure, William Heinesen. Marni Rasmussen credits Heinesen as the inventor of Magic Realism and his pioneering style found an international audience, along with his contemporary best-selling compatriot Jørgen-Frantz Jacobsen. Many of Heinesen’s novels have recently been translated into English by W. Glyn Jones and published by Dedalus Books. Both authors were able to inspire the interest of twentieth century readers in the Faroe Islands, however, precisely because both wrote in Danish. In fact, it is well-known that Heinesen made sure he was not considered for the Nobel Prize in 1981, about which rumours were circulating, for the very reason that it would have taken attention away from independent Faroese culture. In a curious way, the long-standing official Danishness—in the realms of politics, religion, law— enabled the sustenance of a Faroese vernacular culture, and Heinesen’s literature is testament to that tension. As Wylie has it, ‘Denmark, on the one hand, and the land and the sea, on the other […] like all rural peoples, the Faroese have found themselves looking two ways at once’. Or, in Heinesen’s paean to all small nations at the beginning of De fortabte spillemænd (The Lost Musicians):

Far out in the radiant ocean glinting like quicksilver there lies a solitary little lead-coloured land. The tiny rocky shore is to the vast ocean just about the same as a grain of sand to the floor of a dance hall. But seen beneath a magnifying glass, this grain is nevertheless a whole world.

Posted by European Studies at 10:41 AM