As part of its 15th anniversary celebrations and in response to the COVID-19 pandemic, Belarus Free Theatre (BFT) has launched a fairytale-inspired campaign called #LoveOverVirus. Members of the theatre company, as well as a number of famous figures including Stephen Fry and Juliet Stevenson, are reading extracts from their favourite fairytales and short stories every evening at 6pm until the end of May. In addition, BFT has opened up its archive to stream 24 productions between April and June. Each show can be accessed for 24 hours and English subtitles are available for performances in Russian and Belarusian. The theatre company is banned in Belarus; its co-founding artistic directors, Natalia Kaliada and Nikolai Khalezin, came to the UK as political refugees in 2010, and rehearse its underground performances in Minsk via Skype.

Stephen Fry’s contribution to the Love Over Virus project is a reading of The Selfish Giant by Oscar Wilde. First published in 1888, the tale is part of Wilde’s collection of short stories for children and adults, The Happy Prince and Other Tales (a free digitised copy is available to download from Project Gutenburg). Influenced by traditional fairytales, the seemingly whimsical stories offer an astute social commentary on Victorian society, depicting poverty, suffering and cruelty, but also love, kindness and sacrifice. 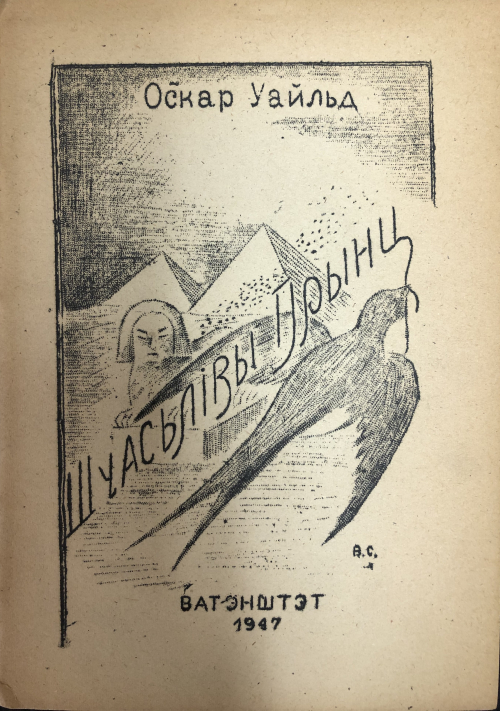 The title-story from the collection, The Happy Prince, similarly aimed to bring solace to children and adults when it was translated into Belarusian as part of Displaced Persons (DP) camp publishing activities in 1947. At the end of the Second World War, approximately 11 million people had been displaced from their home countries, with seven million in Allied-occupied Germany. They included concentration camp survivors, and former forced labourers and prisoners of war. DP camps were set up in Western Germany, Austria and Italy, and largely organised by nationality. 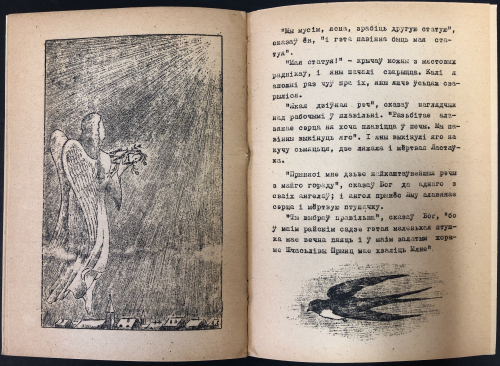 During the German occupation of Belarus between 1941 and 1944, approximately 380,000 Belarusians were deported to Germany as labourers. Thousands more subsequently fled the returning Soviet regime in 1944 (Silitski and Zaprudnik, pp. 135–136). Following the end of the war, Belarusian refugees lived in DP camps throughout Western Germany before they were resettled.

This translation of The Happy Prince (Shchasʹ livy Prynts in Belarusian) was reproduced from a typewritten copy and translated from the English by L. Khvalʹko. The text is accompanied by simple yet powerful pen and ink illustrations throughout. It was published in a camp in Watenstedt in the British zone (now incorporated into the city of Salzgitter) in Lower Saxony, Germany, by the Belarusian Relief Committee (Belaruski dapamahovy Kamitėt). 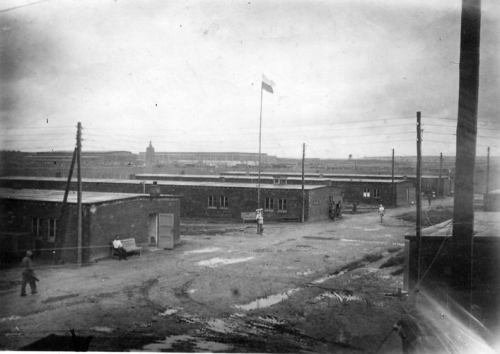 Photograph of a series of buildings at the A1 Heerte displaced persons camp in the Salzgitter region of Germany, 1946. Museums Victoria Collections [Accessed 11 May 2020]

Salzgitter had been the site of Reichswerke Hermann Göring, a state-owned iron and steel complex that used slave labour during the war. Prisoners were housed in concentration camps in the area. After the war, DP camps were established for the some 37,000 (mostly Polish) displaced persons in the city (Neumann, p. 28). Many DP camps were set up on the sites of former German concentration camps and conditions were extremely difficult. Nevertheless, political, educational, religious and cultural activities, including publishing, flourished.

The British Library holds a handful of other Belarusian publications produced in Watenstedt between 1946 and 1948. These include a collection of poems by Maksim Bahdanovich, considered to be one of the founders of modern Belarusian literature (011586.pp.27.); a religious book ‘for the Belarusian family and school’ (4385.c.13.); and copies of the periodical Shliakham zhytsʹtsia (P.P.7615.yh.). To find more items published in Watenstedt, search by place of publication in our online catalogue in Cyrillic and using transliteration. The Library also has a growing collection of other DP camp publications in Belarusian and a number of other languages, including Russian, Yiddish, Latvian, Ukrainian and Polish.