Booktrade and publishing in Southeast Europe during the pandemic in 2020

The British Library works with eight local suppliers in the procurement of books and serials from Albania, Bosnia and Herzegovina, Bulgaria, Croatia, Moldova, Montenegro, North Macedonia, Serbia, Slovenia and Romania. This blog post draws on their reports about the book trade since 1990 and the effects of the current Covid-19 Pandemic. It follows a recent post exploring the British Library's historical ties with libraries and librarians in Southeast Europe and the ways in which they are dealing with the pandemic.

The book trade recovered valiantly from the turbulent times of the 1990s and we are fortunate to have suppliers who are dedicated partners and experts not only in the book trade and publishing but also in the literature, art and scholarship of their respective countries. Together with our library partners, they are credited with procuring up to 3,000 selected titles for the Library annually. Their considerable assistance in building up our collections of south-east European material is highly valued and appreciated.

As we contemplate our past and plan for the future, we would like to shed some light on the background to collection development in this very considerable area and the challenges which it is facing at present. 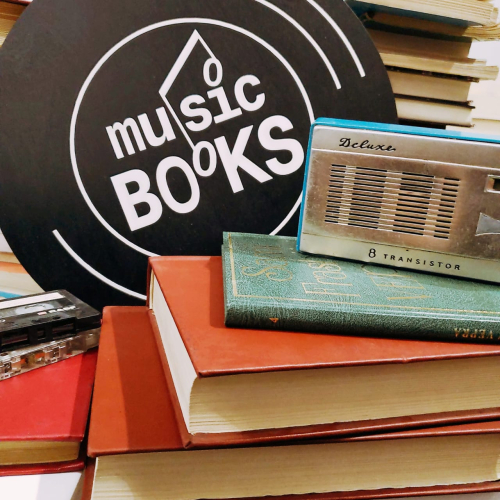 Detail of a bookshop in Tirana. Photo credit: Edvin Bega.

The publishing industry in Albania has changed dramatically in the last 30 years. While in the early 1990s original literature accounted for 75% of all published literary works, by 2019 the figure was less than 20%. In 1997 the Albanian government collapsed and a mass exodus from the country followed, including gifted writers and translators. Albania is yet to recover from it.

The new private publishing houses began to publish the classic works previously denied to readers in the totalitarian state. Undoubtedly this was inspired by the success of Ismail Kadare, and several other writers, translated into more than 100 languages.

Academic publishing has suffered from mismanagement and politicization, and a lot of research remains unpublished.

The earthquake in 2019 and Covid 19 in 2020 have caused several publishing houses to close, and the book trade has come to a halt. At present the number of new titles is very small. Some signs and activity give hope, though. Book sales during the pandemic have not fallen. It is to be hoped that this trend will continue after the reopening of the country. In Bosnia and Herzegovina the production and distribution of books and serials in the period from 1992 to 1997 can be characterized as a patriotic publishing period. Commercial and independent publishers, independent bookstores in south-east Europe and one in Bosnia were saved for the future thanks to the support of the Open Society.

However, patriotic publishing has continued to the present day. In recent years about 2,000 original titles have been published in Bosnia and Herzegovina per year, of which about 70% come from commercial publishers.

In 2019 Bosnia and Herzegovina saw a slight upward trajectory in the number of published titles. This year was also marked by the proactive work of the Association of Publishers to improve the status of writers, publishers and books.

Since the pandemic, bookstores have been closed and publishing houses have significantly reduced production. It is a very uncertain situation for the book market, and reminds our supplier of the siege of Sarajevo in 1992 with a notable difference – this time the enemy is invisible. A book supplied to the British Library that stands out is Bosanska knjiga mrtvih ('The Bosnian book of the dead' (Sarajevo, 2012) ZF.9.a.11211) which gives the names of 95,940 victims of war, and presents detailed data analysis of human losses. 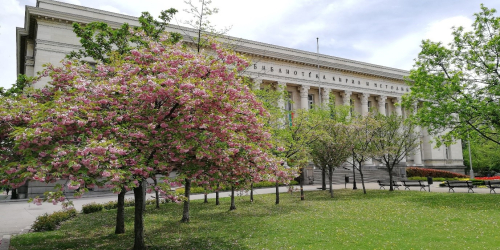 Blossoming Japanese morello cherry-trees in front of the Bulgarian National Library “Sts. Cyril and Methodius”, a gift from the Japanese Embassy in Sofia. They are celebrated in April at the beginning of the springtime, symbolizing new life and hope. Photo credit: George Asenov.

Publishing and the book trade in Bulgaria have managed to stay afloat in the turbulent sea of the market economy in the last 30 years of transition. The main trends during this period have been an increase in the number of published titles, from 3,000 to 10,000 in recent years, and a significant reduction in print runs.

Literary publishing consists of about 70% original material and 30% translations. Contemporary Bulgarian literature is the bearer of national values and identity, tales of the nation’s joys and pains, and of one’s social outlook and personal experiences.

In the state of emergency, the activities of bookstores have stopped. Literary events have been cancelled. Many publishing projects are on hold. The number of books published in 2020 will be smaller, with a decrease of about 20-30% expected.

A recent selection of Bulgarian books for the British Library included the complete works of classical Bulgarian poets and writers such as Peio Iavorov (7 volumes, Sofia, 2010-2013; ZF.9.a.10476) and Nikolai Khaitov (17 volumes, Sofia, 2009-2015; ZF.9.a.8322). The newly-acquired Zografski subornik (Sofia, 2019; awaiting pressmark) documents research into the archives and library of the Bulgarian Holy Zograf Monastery on Mount Athos. 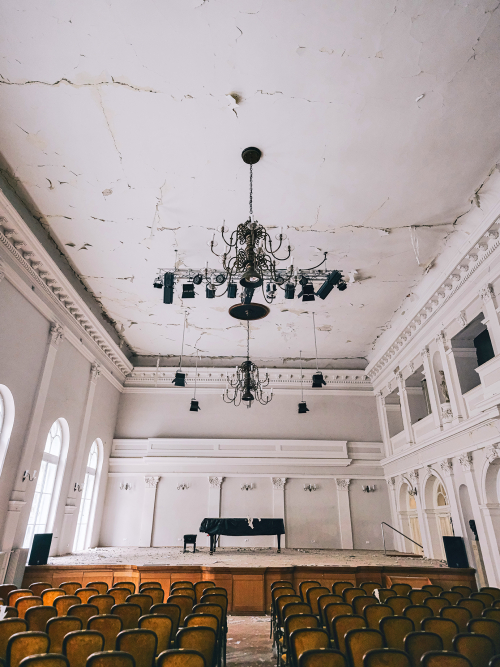 Since the independence of Croatia in 1991, the number of publishers and publishing activities has been constantly on the rise. Many publishing houses disappeared in the years following the crisis of 2008, but the situation improved after 2014, bringing better times for the Croatian book trade.

Unfortunately 2020 has brought new challenges, and publishing is currently in a precarious position. Until April it seemed that the pandemic would not affect the book trade in the country or internationally, but all that has now changed. In Croatia printing of new titles has been reduced by almost 80%, bookstores have been closed, and international partners have stopped ordering.

In addition to this, in March a powerful earthquake hit Zagreb, paralysing the economy and causing damage. Among other historic buildings, the Croatian Music Institute, which houses one of the oldest and most important music collections, was affected. 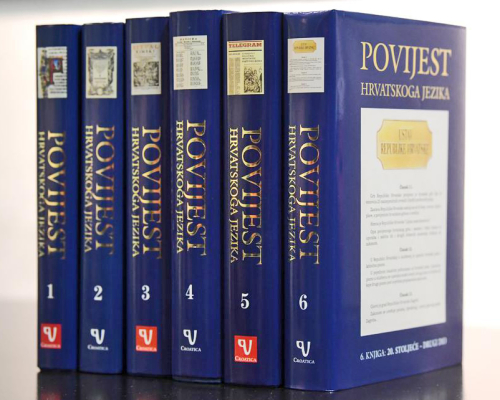 The British Library has been carefully selecting Croatian books for years, building a collection which grows by about 300 titles a year, mostly in the fields of social sciences, arts, humanities and literature. A fine example of this diligent collecting is the major multi-volume Povijest hrvatskoga jezika (‘History of the Croatian Language’).

Clouds over the bridges and cranes in Belgrade reflect the mood in the city during the pandemic. Photo credit: Bojan Vukmirica.

In addition to new private publishers, a distribution centre was established in Belgrade in 2002 to offer publishers a single point from which books could be delivered quickly and safely. The distribution of Serbian and Montenegrin books has been growing ever since, reaching bookstores, university and national libraries and international partners.

For many years the British Library has been acquiring books from Serbia and Montenegro in the fields of history, art, linguistics, literary theory, primary sources, literature and books and serials relevant for research. A good example is the series ‘Koreni’ (‘Roots’) a 35-volume anthropological and geographical study of the settlements, population and customs of Serbian lands (Belgrade, 2010-2017; separate shelfmarks starting with YF.2019.a.15009 for volume 1).

After a two-month break caused by the global infection, publishing in Serbia seems to be returning to normal. 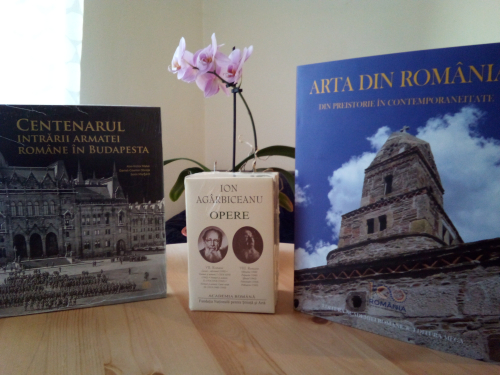 In Romania publishing and the book trade exploded in 1990 as public demand was huge – everybody wanted to read as much as possible, to buy books and journals, to make up for the void felt in communist times. The growth of this industry has been constant even if the rate is now lower than in the first decade.

The pandemic put a stop to growth in this sector for about three months. Books were still being published, but the book trade suffered tremendously. Fortunately, things now seem to be returning to normal. Our Romanian supplier has continued to collect books for the British Library during this time, so there will be no effect on the quality or quantity of Romanian books supplied once the British Library resumes its activity.

The series supplied to the British Library, which stand out for its research and editorial work are Manuscrisele Mihai Eminescu, a facsimile edition in 24 volumes of Mihail Eminescu’s manuscripts (ZF.9.d.239), Biblia 1688, a facsimile edition in 24 volumes of the Romanian 1688 Bible (ZF.9.d.265), and Opere fundamentale, an ongoing multi-volume collection of the ‘fundamental works’ of the most important Romanian writers (separate shelfmarks for different publishers, starting with ZF.9.a.10739).