Believed to have left India in the Middle Ages, the Romani people are one of the biggest ethnic minorities in Europe that has traditionally suffered from prosecution and discrimination. Since they often choose not to disclose their ethnic identity, the exact number of Roma in Europe is unknown and is estimated at about 10-14 million. On the occasion of Gypsy, Roma and Traveller History Month, we present a few selections of publications written by or related to members of the Roma community in Europe. 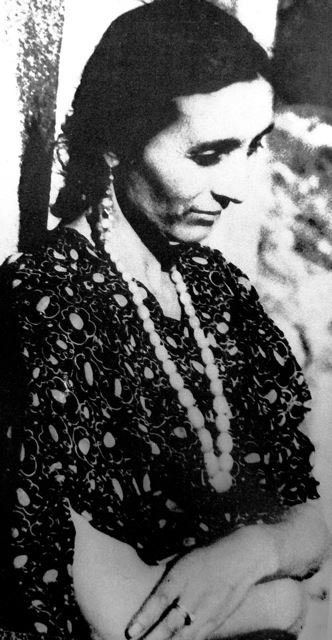 Bronisława Wajs (1908 or 1910-1987), most widely known by her Romani name Papusza, was one of the most famous Romani poets of all time. She did not receive any schooling and, as a child, she paid non-Romani villagers with stolen goods in exchange for teaching her to read and write. At the age of 16 she got married off against her will to a man older than her by 24 years. Papusza survived the Second World War by hiding in the woods and became known as a poet in 1949, as a result of her acquaintance with Jerzy Ficowski, a poet and a translator from Romani to Polish. Her poetry, dealing with the subject of yearning and feeling lost, quickly gained her recognition in the Polish literary world.

Ficowski convinced Papusza that by having her poems translated from Romani and published, she would help improving the situation of the Romani community in Poland. However, Ficowski also authored a book about Roma beliefs and rituals, accompanied by a Romani-Polish dictionary of words, which he learned from Papusza. He also officially gave his support to forced settlement imposed on Roma by Polish authorities in 1953. As a result, Papusza was ostracised from the Roma community. Her knowledge sharing with Ficowski was perceived as a betrayal of Roma, breaking the taboo, and a collaboration with the anti-Romani government. Although Papusza claimed that Ficowski misinterpreted her words, she was declared ritually impure and banned from the Roma community. After an eight-month stay in a psychiatric hospital, Papusza spent the rest of her life isolated from her tribe. Ficowski, who genuinely had believed that the forced settlement of Romani people would better their life by eradicating poverty and illiteracy, later regretted endorsing the government’s policy, as the abandonment of nomadic life had profound implications on the Romani community. Tzigari: vita di un nomade is an autobiographical account telling about the persecutions of Roma and Sinti in Italy during the Second World War and about the Romani genocide, Porajmos. Tzigari is the nickname of Giuseppe Levakovich. Born in 1908 in Istria, in the Austro-Hungarian Empire, Levakovich became an Italian citizen after the First World War and joined the fascist army in the invasion of Abyssinia, in 1936. When the Italian racial laws were promulgated, he and his people became discriminated and prosecuted. His wife was sent to a concentration camp in Germany, and Tzigari joined the Italian resistance movement. There aren’t many written accounts shedding light on these events from a Roma perspective, and this book is certainly an early example, published in 1975. 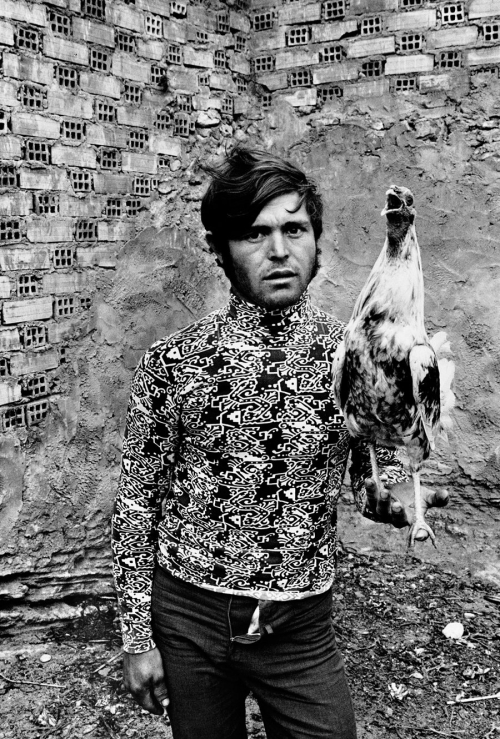 Josef Koudelka’s Gypsies is an unprecedented documentary photography book on Romanies. Born in 1938 in Moravia, Koudelka is a Magnum photographer still active today. The original Cikáni (Czech for Gypsies) was first prepared by Koudelka and graphic designer Milan Kopriva, in Prague in 1968. The book was not published, because in 1970 Koudelka fled from Czechoslovakia to England to seek political asylum. However, the first edition of Gypsies was subsequently published in 1975 in the United States.

It was Roma music and culture that initially drew Koudelka to start taking photographs of the people. By immersing himself into their lives he managed to capture the intricacies of their everyday existence. Leading a nomadic life, they were like him in a way. “For 17 years I never paid any rent. Even gypsies were sorry for me because they thought I was poorer than them. At night they were in their caravans and I was a guy who was sleeping outside beneath the sky.”

Gypsies offers an unbiased and honest insight into Roma people’s lives. It consists of 109 black and white photographs, taken between 1962 and 1971 in what was then Czechoslovakia (Bohemia, Moravia, and Slovakia), Romania, Hungary and Spain. During this time, Koudelka lived, travelled with, and documented Europe’s Roma communities. His masterful storytelling is bursting with emotion and the realism of people caught up in everyday situations, from individuals and family portraits to suited musicians, funeral processions or weddings set in rural landscapes. The unfolding candid images draw the viewer in and make them feel as if they are there with them, experiencing their lives. This rich and inspiring source of Roma iconography and self-identity is a timeless document of the community in its heyday. 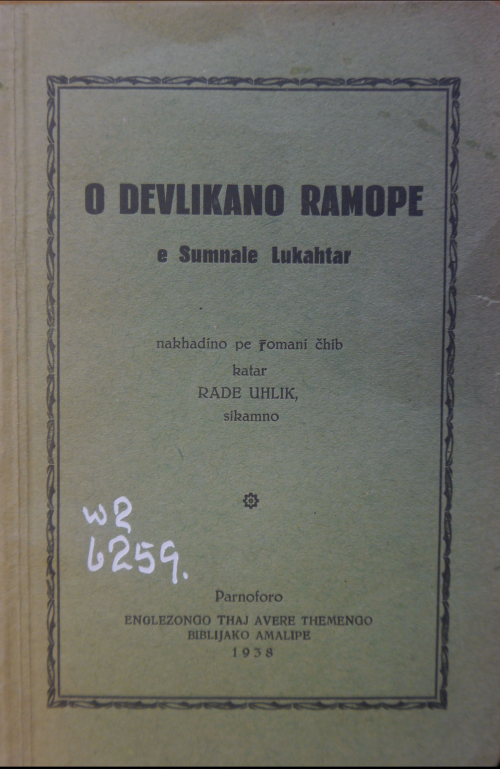 “Romani, read poems and keep your mother tongue” is a simple and powerful message attributed to Rade Uhlik, a great researcher of the Romani language and culture from Southeast Europe.

Rade Uhlik (1899-1991) was a Bosnian and Herzegovinian linguist and curator at the National Museum in Sarajevo. He was the first Romani scholar in the Balkans and a pioneer in Romani studies. His scholarship was varied and prolific in multiple disciplines: from language and linguistics to history and ethnography and culture in general.

Uhlik was noted for his scholarly study of the Romani language and its many dialects. Most of his research was done away from the office. He devoted his time mainly to fieldwork and to collecting stories, poems and customs of the Romani people from Bosnia, Croatia and Serbia, which was his greatest scholarly achievement. His first book published in Prijedor in 1937 was a collection of Romani poems (We hold another edition of his Ciganska poezija (‘Gypsy poetry’; Sarajevo, 1957; 011313.m.48).

Uhlik collected about 1200 Romani stories in 20 volumes of which four have been published, three outside Yugoslavia and only one in Sarajevo in 1957 as Ciganske priče (‘Gypsy stories’; 11397.dd.53). In 1938 Uhlik translated the Gospel of Luke into Romani as O Devlikano Ramope. His Srpskohrvatsko-ciganski rečnik. Romane alava (‘Serbo-Croatian-Gypsy dictionary’) was first published in three sequels in the Journal of the Gypsy Lore Society, with whom Uhlik actively collaborated, and then as an independent edition in Sarajevo in 1947 (012977.b.33. Revised edition (Sarajevo, 1983) YA.1991.a.7953). 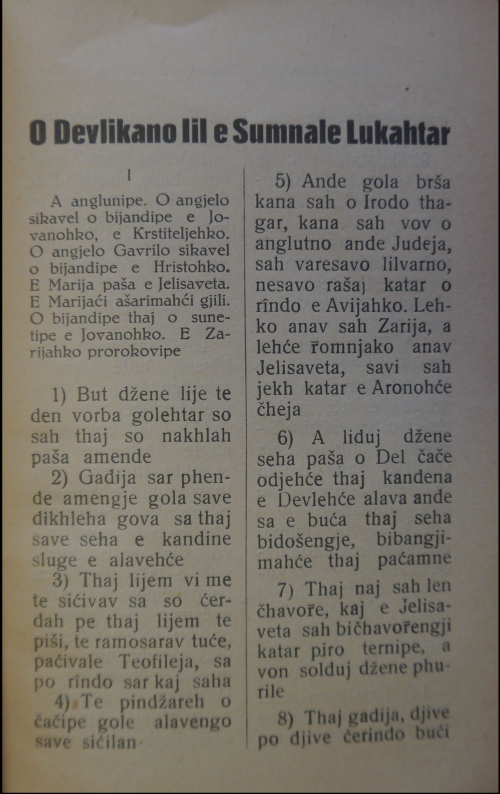 Uhlik as a non-Roma did great service to Romani language and culture, passionately committed to the cause, almost independently and with little or no support of the Yugoslav academy and society. To preserve the memory of a great scholar, the Serbian Academy is helping the establishment of an international “Rade Uhlik” institute for the Romani studies under the sponsorship of the European Centre for Peace and Development in Belgrade.