This is the second of our blog posts about the Roma community in Europe to mark Gypsy, Roma and Traveller History Month 2020.

Our collection of French Roma authors is not, as yet, as developed as it as it could be, but we hold books by some of the most prominent Roma advocates of the Roma culture and way of life in France: Sandra Jayat and Alexandre Romanès.

Sandra Jayat was born in Italy, or France, in 1939. She came from the Roma group called “Manouche” or “Sinti”. At the age of 15, she fled to Paris to escape a forced marriage. She sought refuge with her cousin Django Reinhardt, the jazz musician, taught herself how to read and paint, and soon became the muse of Parisian artists and writers. Herbes Manouches, her first collection of poems, was published in 1961 and illustrated by Jean Cocteau. In 1972, she produced a recording of readings of her poems, accompanied with original music by Reinhardt. In 1978, her semi-autobiographical novel, La longue route d’une zingarina, became a success, selling more than 40,000 copies, and being read in schools. Jayat still lives in France today. Her entire artistic oeuvre is inspired by the world and symbolism of Roma.

Jayat is also a renowned painter, and has always been committed to the recognition of Roma artists. She organised the exhibition ‘Première Mondiale de l’Art Tzigane’, which ran from 6 to 30 May 1985 at the Conciergerie in Paris. We have her Moudravi, où va l'amitié, published in 1966 and illustrated by Marc Chagall (X.908/14070.) 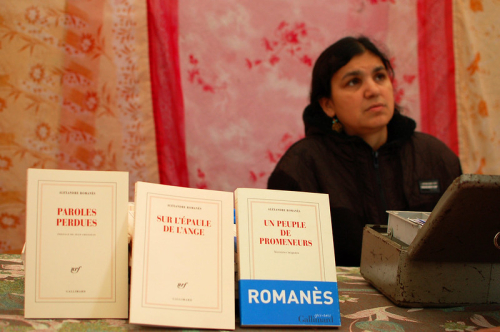 Born in 1951, Alexandre Romanès comes from a famous family of circus artists. Thinking that the circus was losing the values of the Roma, he quit in the 1970s to create his own travelling show. He met the French poet Jean Genet, who became a friend, and Lydie Dattas, who taught him to read and became his first wife. Romanès went on to create his own “Tzigan Circus”, the “Cirque Romanes”, in 1993.

His style consists of short poems, aphorisms, memories and scenes of Roma life and wisdom:

Diary of a Young Roma Traveller 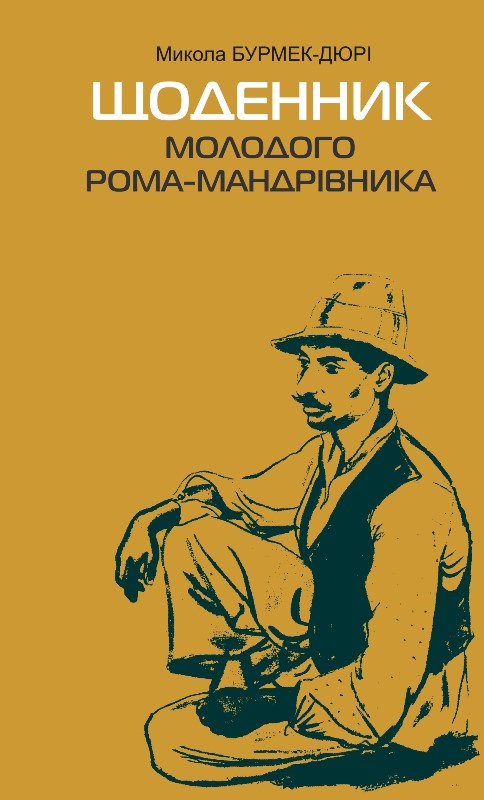 Two years ago, the Roma writer Mykola Burmek-Diuri caught the attention of the Ukrainian media following the publication of his book, Shchodennyk molodoho roma-mandrivnyka (‘Diary of a Young Roma Traveller’). Writing in Ukrainian, Burmek-Diuri provides a unique window into the daily life, culture, traditions and history of the Roma community in Zakarpattia, the region in southwestern Ukraine where Burmek-Diuri and the majority of the country’s Romani population live, through a mixture of autobiographical stories, fairytales and ethnographic sketches. Given the rise in violent attacks against Roma communities in the country in recent years, this book is particularly timely and important for its presentation of the world through the eyes of a young Roma writer. Burmek-Diuri has since published two further books: Mama kazaly pravdu (Uzhhorod, 2018; YF.2019.a.7579) and, most recently, a collection of poetry and prose entitled Honir dykoi troiandy. All three were published with the support of the International Renaissance Foundation’s Roma Programme, which works with NGOs and activists in Ukraine to involve ‘representatives of the Roma community in social processes and combating discrimination’.

In her foreword to the English edition of the book A False Dawn: My Life as a Gypsy Woman in Slovakia by Elena Lacková, Milena Hübschmannová, one of the founders of the Roma Studies as an academic discipline in Czechoslovakia, wrote: “What can I say about Roma better than the song of a lone Romani woman’s life experience?”. And this is true indeed. This book is available in English, and is a really fascinating account of Romani traditions, customs, ceremonies and superstitions, seen though the life of someone who grew up to become the first Romani author in post-Second World War Czechoslovakia. Elena Lacková (Ilona Lasko, 1921–2003), born in a Roma settlement in Veľký Šariš in eastern Slovakia, was the only girl among the 600 children in the settlement to complete primary education and in her 20s became the first author to give the Romani people a voice in literature. Many consider her to be the Roma equivalent of the writer Božena Němcová, who played a prominent part in the Czech National Revival movement. In her works Lacková transformed and refined original folk tales opening a whole new world of the people who had been almost invisible before. Her first literary work was a play written in Slovak, Horiaci cigánsky tabor (‘The Gypsy Camp is Burning’, 1947) about the local Roma’s collective experience of the Second World War. Later she chose to write in Romani and founded a Romani periodical, Romano L’il (Gypsy News).

Elena Lacková is probably the best-known name, but definitely not the only one in Romani literature. Tera Fabiánová was the first person in the former Czechoslovakia to write poems in Romani. The Department of Folk Music Research and Ethnomusicology of the University of Music and Performing Arts Vienna recorded her reciting her poems in Romani. 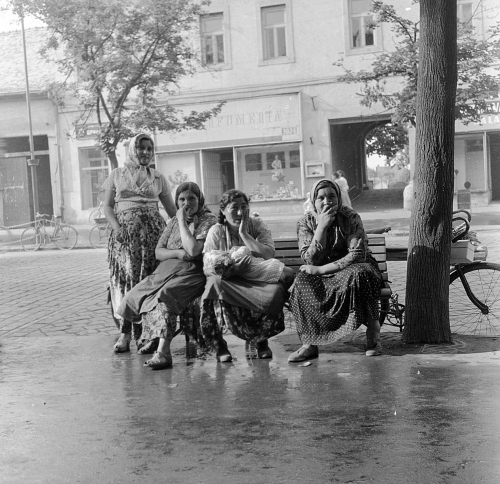 Romani women in Czechoslovakia in 1959, a photo by FOTO:FORTEPAN / Zsanda Zsolt, Wikimedia Commons

Viťo Staviarský, a well-known name in Slovak literature, is the author of the short story ‘Kivader’ (2007) and the novel ‘Kale topanky’ (2012), which are set in a Romani settlement. In 2014, the publishing house Knihovna Václava Havla in Prague published a book of Romani women authors called Slunce zapadá už ráno (‘The sun sets in the morning’). Irena Eliášová, Jana Hejkrlíková, Iveta Kokyová and Eva Danišova contributed to it. I hope that we will see more of these books translated into English, so that they can get a wider readership.

How did a tiny settlement of around 230 souls and 60 houses in northeastern Hungary put itself on the map? Bódvalenke, a community of Romani majority, became renowned as the ‘fresco village’ thanks to a remarkable initiative some ten years ago. A charitable organisation started to invite Romani artists, both from Hungary and abroad, to use the dull windowless walls in the neighbourhood as blank canvasses for giant colourful paintings.

Mural by József Ferkovics. A colourful album dedicated to the work of the artist and published recently is among our recent acquisitions. Image by Pásztörperc - Self-photographed, CC BY-SA 3.0

The aim of the project was to pull the village out of deep poverty: each house volunteered by its inhabitants was given new plastering before being decorated, but the community as a whole would also benefit in a variety of ways from any income generated by the arrival of visitors to this unique open-air display. Today, one can see 33 magnificent murals by 18 painters on Romani and Gypsy themes: old legends, traditional life, family, grief and dreams. Sadly however, with the lack of infrastructure it is proving difficult to attract tourists and the village is still struggling economically. 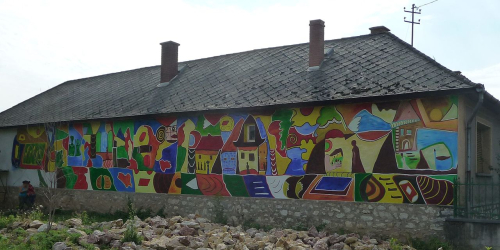