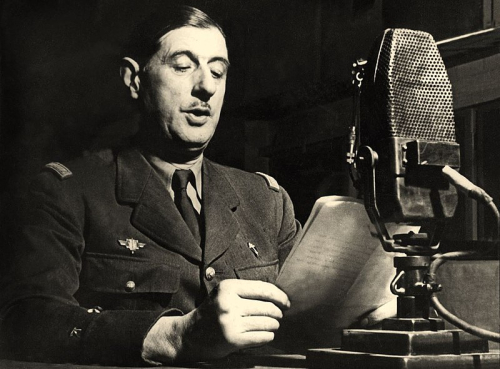 Charles de Gaulle broadcasting from the BBC in London in 1941. (Image from Wikimedia Commons)

This speech, known as L’Appel du 18 juin (The Appeal of 18 June) is often considered to be the founding step of the French Resistance, and it is extremely famous in France – many streets and squares now bearing that name – up to the point that it is often wrongly quoted: the famous rousing sentence “La France a perdu une bataille! Mais la France n’a pas perdu la guerre” (“France has lost a battle, but France has not lost the war”) is often associated with the Appeal of 18 June, but actually comes from a motivational poster headed “A Tous Les Français”, which was plastered over London on 3 August 1940. (The British Library has a copy of the Bulletin officiel des Forces françaises libres, a journal issued intermittently from 15 August 1940 to 31 August 1944. (SPR.Mic.B.150(2), which reproduces the poster exactly albeit in a smaller size.) Other broadcasts by de Gaulle, on 19 and 22 June reached more people in occupied France.

The first, famous speech, was not actually recorded, but a manuscript for internal use was later found in the archives of the Swiss Intelligence Agencies. The manuscript of the speech, as well as the recording of the 22 June speech, was entered in UNESCO’s Memory of the World Register on 18 June 2005.

Following the speech, a daily radio show called Ici la France was launched on 14 July on Radio Londres, a station broadcast from 1940 to 1944 by the BBC in London to occupied France. From 6 September 1940 the title changed to Les Français parlent aux Français. The programme was entirely in French and was operated by the Free French who had escaped from occupied France. It served to send coded messages to the French Resistance, appealed for uprisings, and counterbalanced the propaganda from the authorities in the occupied territory. Radio Londres opened its transmission with: “Ici Londres! Les Français parlent aux Français” (“This is London! The French are speaking to the French”) another quote that has become famous in France. In contrast to the  traditional formal style of French radio stations, some of the announcers introduced personal messages, songs and jokes into the programmes. The first four notes of the theme music, for instance, the opening of Beethoven’s Fifth Symphony, were stylised to represent the letter “V” in Morse code (…-), standing for the Victory sign. 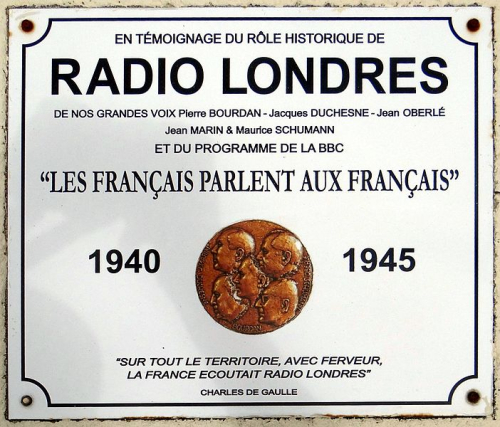 Plaque commemorating the work of Radio Londres in the Asnelles cemetery, Calvados, with a medallion showing the profiles of presenters including ‘Jacques Duchesne’ (Michel Saint-Denis) (Photo by Wayne77 from Wikimedia Commons CC-BY-4.0)

Of particular interest to us today is Michel Saint-Denis.

The British Library Manuscripts Department has recently completed the arrangement and cataloguing of the Michel Saint-Denis archive. The archive brings together almost 200 volumes of professional correspondence, papers, and other ephemera relating to Saint-Denis’s work in the theatre, as well as his personal letters and diaries.

The nephew of the famous French actor and theatre director Jacques Copeau, in 1935 Saint-Denis accepted an invitation to London, where he founded the London Theatre Studio, working with actors such as Alec Guinness, Peter Ustinov, Michael Redgrave, John Gielgud and Laurence Olivier. He soon became a renowned director. During the Second World War, he directed the French programme of Radio Londres under the pseudonym of Jacques Duchesne. Section D of the archive contains evidence of Saint-Denis’s service with the French section of the BBC during the Second World War (Add MS 81143-81166) including scripts of radio talks, reports showing uncertainty about what to talk about, what the BBC thinks the French want to hear, and material on Anglo-French relations generally. There are also lots of newspaper clippings and reactions from listeners, including internees in concentration camps asking for help. The Library also holds some audio recordings of Michel Saint-Denis from the 1960s describing how he helped Winston Churchill to make a broadcast in French during the War.

But the most moving memory is actually buried in a pile of other letters and souvenirs and is evidence of the reach of Radio Londres and of De Gaulle’s messages. When the French Curators from the Romance Collections department had the chance to go and visit the archives, we were touched to see this letter from a French family who listened to the programme every day. On paper from a run-of-the-mill French schoolchild’s notebook, such as is still in use today, the young daughter had drawn a heart and cross for the General de Gaulle, with a song titled “Heart of a Free Family” (to be sung on the melody of the Marseillaise) 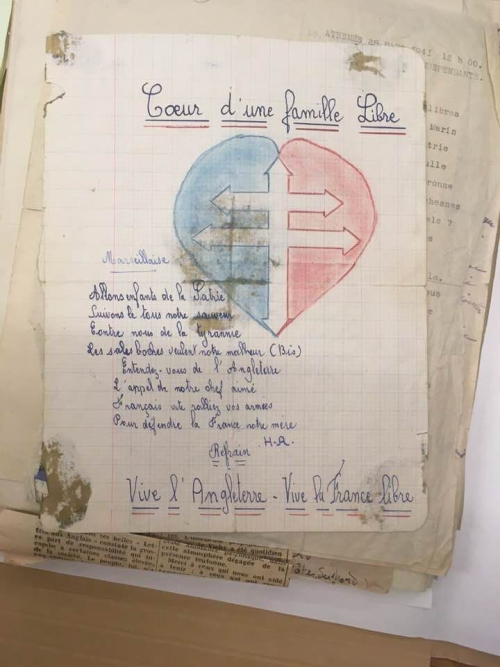 A child’s poem and drawing of a heart with the Cross of Lorraine, created in response to Radio Londres Broadcast 24.3.1, from the Michel Saint-Denis Archive (Add MS 81143-81166).

The verso only had a simple message: “Pass on to General de Gaulle”. 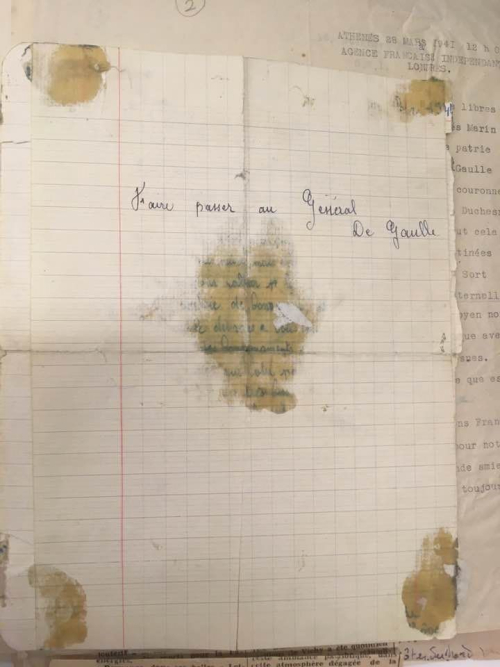 With thanks to Laura Walker, Lead Curator of Modern Archives and Manuscripts 1850 1950, and to Jack Taylor, former PhD placement student working on experiences of the Second World War in Britain.