On the night of 9 November 1989 the Berlin Wall was opened and East Berliners flooded through to visit the western sector of the city. In the following days more crossing points appeared, sections of the wall began to come down, and a city divided for 28 years began the long process of growing back together.

Among the many books in the British Library about the fall of the Wall and its aftermath, there is slim A4 booklet, reproduced from typewriting and illustrated with black-and-white photographs. It contains reactions to the events of 9-12 November 1989 from the children of a West Berlin school, written in the weeks following 9 November. The photographs were taken on a walk along the wall on 28 November, and three days later the children conducted interviews with passers-by, asking their opinion on events; these round off the booklet. 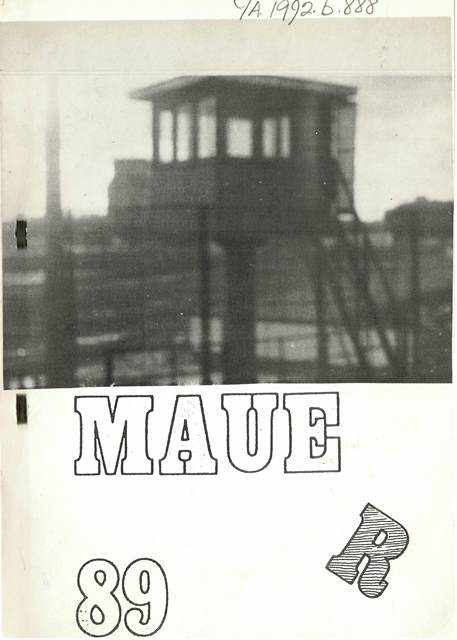 The children’s accounts of the weekend are grouped around different themes. Some just record events, others mention reunions with family members: one, whose East Berlin relatives came to visit, touchingly reveals that “I saw my father cry for the first time”. Two describe the experience of hearing the news when away from home and four children choose to write as if describing things for their own grandchildren forty years on.

Despite these slight differences there are recurring themes. Most of the children mention the 100 Deutschmark ‘Welcome Money’ (‘Begrüßungsgeld’) which the East Berliners received. Some describe the long queues at banks to collect the money, and many talk about what the East Berliners bought. Fruit is the thing most frequently mentioned, especially oranges and bananas. The idea of East Berliners rushing to spend their welcome money on fruit and clearing the shops of bananas has become something of a cliché, so it’s interesting to see that it was already the Westerners’ perception at the time. One piece also mentions that a popular brand of American jeans sold out and that McDonald's almost ran out of hamburgers.

Heavy crowds are another familiar theme, particularly in the West Berlin shopping street Kurfürstendamm or around the Brandenburg Gate. A couple of writers mention visitors going from west to east – through the divided Potsdamer Platz or to visit Alexanderplatz in the east of the city. Another form of congestion was the number of East German Trabant cars suddenly filling the streets of West Berlin. One of the children’s regular interview questions is about what westerners think of the number of ‘Trabbis’ coming through – the cars emitted higher levels of pollution than were permitted in the west, and this was of concern to some. 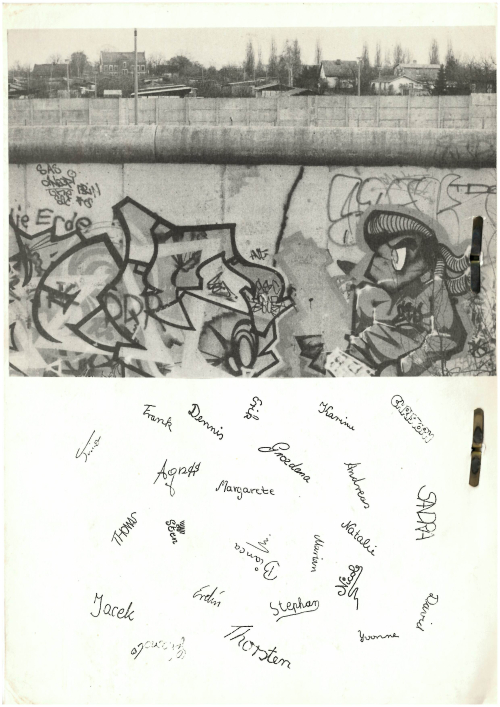 Back cover of the booklet

In some interviews the children also ask for opinions about a potential German reunification. The respondents are cautious, thinking that it needs time and, in one case, recognising the economic risks involved, but most are fundamentally in favour of the idea.

The school is named only as ‘KG 71’ and the individual pieces are unsigned. The children’s forenames are reproduced on the back cover, but no surnames. It’s not even clear how old they were, though the handwriting and the style of the pieces suggest between about 10 and 12, and if the G of ‘KG’ stands for ‘Grundschule’ (Primary School), they could have been in their last primary year. If by some remote chance one of them is reading this and remembers making the book, we’d love them to get in touch!

Posted by European Studies at 11:06 AM