This post is part of our 'Inheritance Books' series with the Americas blog, where colleagues choose an 'inherited' item that was already in the library when we started working here, and one that we have acquired or catalogued for our collections during our own time to 'pass on' to future users, visitors and colleagues, and explain why they're important to us. This week, we hear from Katya Rogatchevskaia, Lead Curator of East European Collections.

What my predecessor Dr Christine Thomas left for me was unprecedented: in a small Slavonic book, offered to the British Library by a rare books dealer, she recognised a copy of the first dated Slavonic Primer (Azbuka C.104.dd.11(1)) printed in Lviv in 1574. It was not just another copy – it turned out to be the second surviving copy of this book. The second in the world, and nobody had known about its very existence! Before the British Library acquired this book in 1982 on Chris’s recommendation, only one surviving copy had been recorded at Harvard University Library. A facsimile edition of the Primer had been published just several years earlier, and therefore Chris could match the items and could not believe her luck.

Of course, to be completely honest, this wonderful curatorial success story has been a constant source of melancholy envy for me. On the other hand, it was a real present from Chris, as it provided me with a wide variety of creative opportunities. I can proudly report that I followed in my predecessor’s footsteps by writing an article and a couple of blogs promoting and interpreting this collection item and co-organising a conference Revisiting Ivan Fedorov’s Legacy (UCL SSEES-British Library, 2014). In the digital environment it was only natural that, as part of the conference outcomes, the Primer was fully digitised and is now available via the BL catalogue. During the lockdown, when I suddenly had more time on my hands, my colleagues suggested a tool that can cope with OCR, and I decided to give it a try. This is a new and exciting skill to acquire and I am really enjoying the project. I hope the text will be available alongside the images very soon. 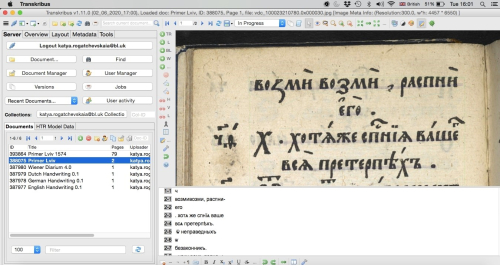 One of my memorable acquisitions is linked to one of the strengths of our collections – Russian futurist and constructivist books. There was no mystery or drama associated with this acquisition, although the story is quite sad, like many stories that originate from the period of early Soviet history.

The Soviet propaganda journal USSR in Construction (P.P.7500) is probably quite well known, not only among those who have a special interest in Soviet history. The style of the journal was visual and cinematographic, and became iconic among designers. Not only were photographs ‘constructed’ using photomontage as a major tool, but some of the issues were really ‘assembled’ containing, for example, pieces of fabric, aluminium foil or vinyl disks.

I acquired a set of the magazine that was a ‘little brother’ of the famous USSR in Construction project. This Soviet art-illustrated monthly magazine has a long and peculiar title Na stroike MTS i sovkhozov (‘At the Construction of Machine Tractor Stations and State Farms’; HS.74/2243). It did not have international editions in various languages and was quite short-lived: 1934-1937. However, despite this, full sets are extremely rare in library collections. 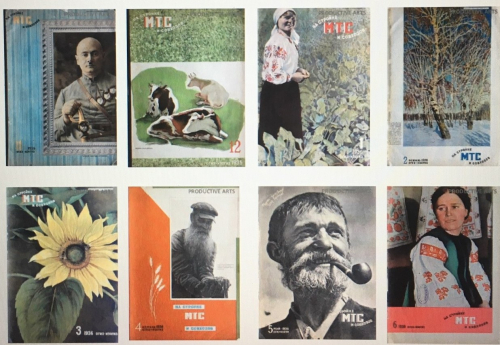 The magazine covered just one sector – Soviet agriculture. It specialized in promoting the achievements of state farms and collective farms and stood out as a separate edition of the magazine USSR in Construction. Magazine photo essays advocated ‘the best examples of honest work on the farm, the best examples of organizational activity in the MTS and state farms, and the best achievements in raising agriculture, culture and life of the collective and state farms’. Seven issues were designed by El Lissitzky.

Na stroike MTS i sovkhozov has been already researched and cited, but certainly lends itself to further enquiries.

Ivan the Terrible, primers, ballet and the joys of curatorship https://blogs.bl.uk/european/2014/05/ivan-the-terrible-primers-ballet-and-the-joys-of-curatorship-.html

E. Rogatchevskaia. ‘“A Beautiful, Tremendous Russian Book, and Other Things Too”:
An Overview of Rare Russian Books from the Diaghilev-Lifar Collection in the British Library.’ Canadian-American Slavic Studies (2017, 51:2-3) https://brill.com/view/journals/css/51/2-3/article-p376_10.xml?language=en

Posted by European Studies at 10:30 AM