This post is part of our ‘Inheritance Books’ series with the Americas blog, where colleagues choose an ‘inherited’ item that was already in the library when we started working here, and one that we have acquired or catalogued for our collections during our own time to ‘pass on’ to future users, visitors and colleagues, and explain why they’re important to us. This week, Susan Reed, Lead Curator of Germanic Collections, shares her selections.

The book I have inherited is one that I have never actually read in the form in which I have inherited it, but which was indirectly responsible for my interest in the German language and, by extension, for my choice to study German at university and the path of my career ever since. It is a 1930s adaptation of Emil Kästner’s children’s classic Emil und die Detektive, simplified for English-speaking learners of German. Why have I inherited it? It’s a slightly long story. 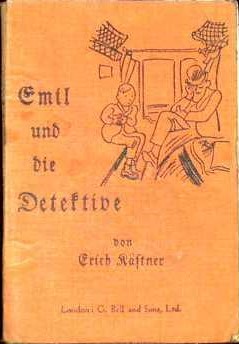 On the outbreak of war in 1939 my mother Jean, then 12 years old, was evacuated from her home in North London. Like many early evacuees, she returned home after a few months as the feared attacks on cities failed to materialise, although ironically the family house was in fact bombed early in the Blitz. Thankfully the whole family – including Tanner the dachshund – survived, but that’s another story. The point of this story is that, while Jean and others were away, the pupils at her school who had not been evacuated had started learning French. Those returning were simply given a textbook and told to catch up. It was Jean’s first experience of learning a language and she did not enjoy it. She always remembered being baffled by the teacher repeatedly saying what she heard as ‘on cauliflower’ – in fact ‘encore une fois’, the request to repeat a sentence.

So when Jean started learning German from scratch in the following school year, it was a bit of a revelation. Her textbook was the long-lived Deutsches Leben by A.S. Macpherson (first published 1931-34; 12964.de.4.) but what really stuck in her mind was that, as early as they were able, they started reading the simplified Emil und die Detektive. Even in a much abridged and simplified form it made her realise that it was possible to read something in another language that was a real story and genuinely entertaining.

Although Jean never pursued language studies beyond school, her stories of the difficulty of French and the relief of learning German must have planted a seed in me. Although I actually found French initially easier to learn at school, I was far more excited about starting German, and German was the language that I pursued and still love. In a strange and indirect way, the Second World War, with help from Emil und die Detektive and my mum, made me a Germanist.

After 27 years in the BL there are many books I could pass on, and the one I have chosen is perhaps over-familiar, having often been featured in blogs, in exhibitions and on the website, but it remains the most memorable and exciting acquisition of my career.

When I started researching the history of German-language printing in 19th-century Britain, I was surprised to discover that the first edition of the Communist Manifesto was published in London by a group of German radical exiles and immigrants in February 1848. I was less surprised (although disappointed) that the BL didn’t have a copy: it was after all a clandestine publication and none of those revolutionaries in neighbouring Fitzrovia would have thought of dropping a copy off at the British Museum Library to comply with legal deposit legislation (then not particularly rigorously enforced even for mainstream publications). Also, the Manifesto quickly faded from view after its first publication following the outbreak of European revolutions based on more moderate calls for change and largely led by middle-class liberals rather then the united proletariat. It was only in the 1870s and 80s that European socialists rediscovered the Manifesto and started to spread its message. 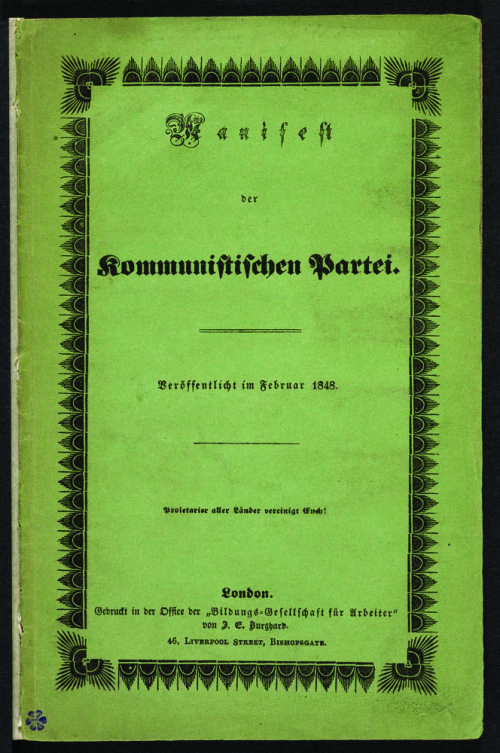 Ironically, by the early 21st century the few surviving copies of the first edition of the Manifesto were highly expensive and sought-after items – potentially luxury purchases for rich collectors. The then Lead Curator of 19th-Century British printed books and I kept our eyes open for copies on the market, and in late 2008 we spotted one that fulfilled all our requirements regarding condition, printing and provenance. It was to be sold at auction in Paris and, by a fortunate coincidence, I was travelling to Paris shortly before the auction date for a work-related visit, so was able to go to the auction house and meet the agent who was going to bid on our behalf in order to inspect the book together. Auction houses near the Champs-Élysées are not my usual stamping-ground and I had mixed feelings of excitement and heavy responsibility as we examined the book and agreed that the BL would go ahead with our bid.

On the day of the auction I was back in the office doing routine things when my 19th-century British collections colleague came rushing in to say “We’ve got it!” Uncharacteristically for two rather restrained Brits, we hugged each other for joy, and I remember feeling thrilled that this important piece of world history and Anglo-German publishing history was finally going to find a home in the BL. And I was the one who got to catalogue it!

Since then my path has continued to cross with the Manifesto. It was featured in the British Museum’s 2014 exhibition Germany: Memories of a Nation, and readers in the UK can hear me (among other more expert voices) talking about it in the accompanying radio series here. And of course it had to be part of our own Russian Revolution exhibition in 2017. There it was displayed at the start of the exhibition between two large maps showing the extent of the Russian Empire at the start of the 20th century. We wanted to illustrate the fact that this flimsy, obscurely-published pamphlet was like the pebble that started the avalanche that would destroy that vast empire. 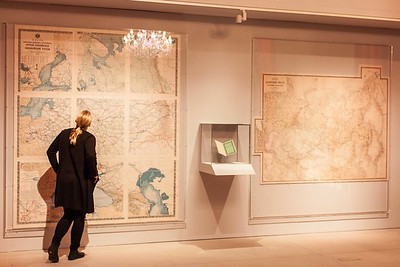 Whatever you think of the Communist Manifesto and its legacies, it was probably the most influential (for good or ill) foreign-language work ever printed in Britain, and I will always remember the excitement and pride I felt at bringing a copy of the original, London-printed edition to the BL.