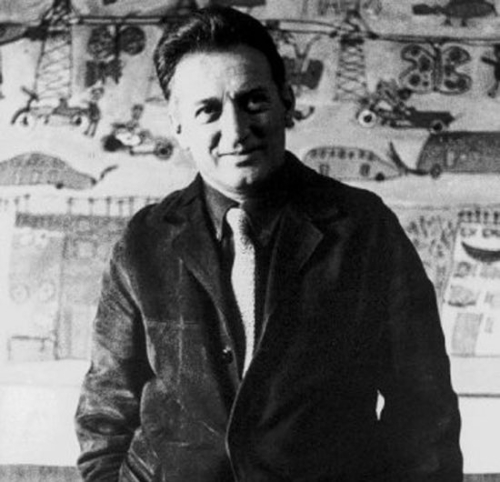 Gianni Rodari (1920-1980) is regarded as the father of modern Italian children’s literature and we celebrate his fantastic contribution to literature and education in the year of his triple anniversary. 100 years since his birth, 40 years since his death, and 50 years since his “Little Nobel”, namely the Hans Christian Andersen Writing Award, his books are still inspiring all sorts of cultural events in Italy. Last March, for instance, his iconic Favole al telefono triggered “Pronto, chi favola?”, a free storytelling service on demand set up spontaneously by actors to uplift children at home during the COVID-19 lockdown: every day from 4 to 8 pm, an actor rings a child to read over the phone one of the 70 fables included in the book. 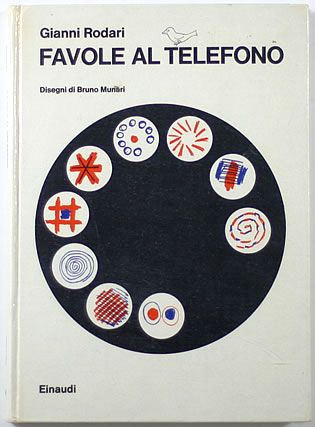 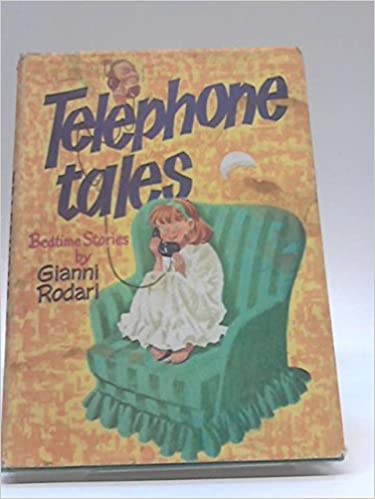 In Italy Gianni Rodari needs no introduction, but English translations of his books are few and readers in the UK are not familiar with his delicious children’s stories. Although the British Library’s acquisition policy for purchasing foreign material generally excludes children’s literature, the library fortunately holds 40 works by and about Rodari. This presence underlines the international recognition gained by the author and helps to track his legacy through translations, adaptations and critical writings. Half of our holdings, consisting of criticism on Rodari’s intellectual contribution, might serve teachers and educators as an inspiring toolkit. An interesting surprise is the existence of four musical scores inspired by Rodari’s texts, one in Italian and three in Russian. This illustrates his huge popularity in the Soviet Union, a country where his books met with massive success thanks to several translations and adaptations for schools, and that Rodari visited often between 1952 and 1979. He commented on the Soviet educational system in Giochi nell’URSS. Appunti di viaggio (Turin, 1984; YA.1990.a.3048). On the other hand, a report of his journey to China in the 1970s is available in Turista in Cina (Rome, 1974; X.709/25245).

In regard to Rodari’s fiction, the British Library holds some Italian and English first editions of nursery rhymes, fables and short stories. The most recent publication is a bilingual collection (Italian/English) Tales to change the world (Lincoln, 2008; YK.2010.a.169). Among the first editions there is also a Russian one, Chem pakhnut remesla? Kakogo tsveta remesla? (Moscow, 1954; 12843.p.54), including two poems translated by children’s writer Samuil Y. Marshak. 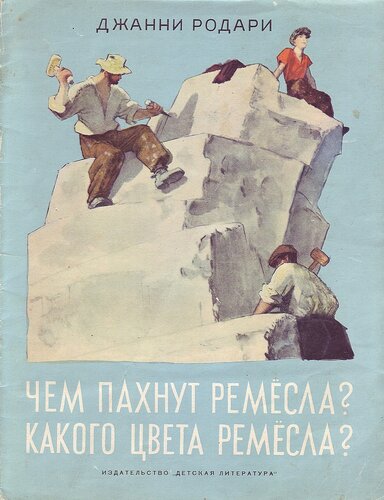 Before introducing three of Rodari’s cult stories, a brief remark on his style and preference for extremely short literary genres (aphorisms, limericks, nursery rhymes, poems, fables, etc). A supreme love of words (in sound, script and meaning), a musical ear and a witty irony are key elements in his writing, always aiming to select the exact word. His surrealist approach to linguistic invention has been compared to those of Raymond Queneau, J.M. Barrie and Lewis Carroll. Rodari’s graceful pen mastered nonsense, parody and puns to perfection. He also believed that the best literary form to educate children with courage and intelligence was the fable. 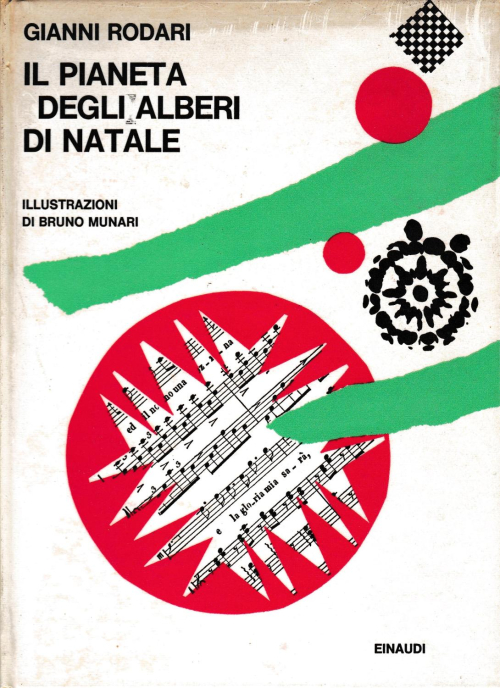 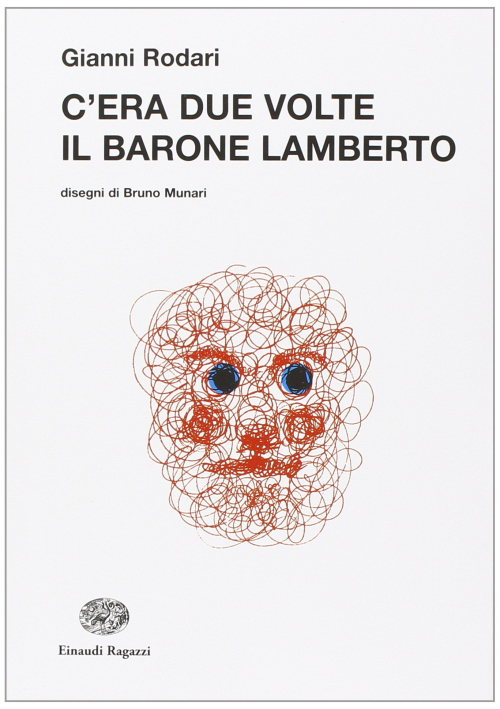 Italian and Russian children share a common literary hero in their childhood memories, Cipollino (‘Little Onion’), the vegetable protagonist fighting for social justice in Il romanzo di Cipollino (1951, retitled Le avventure di Cipollino in 1957) and its sequel Le avventure di Cipollino 2 – Cipollino e le bolle di sapone (1952). The book was an immediate success in the Soviet Union thanks to the Russian translation and various adaptations including a ballet (Chipollino; Moscow, 1977; g.1548.v), and a cartoon. Being published by communist publishing houses, it was no wonder that the book had difficulty circulating in 1950s Catholic Italy. The British Library holds one of the late anthologies Le storie (Rome, 1992; YA.1994.a.15779), where Cipollino’s story is in good company with five others (Piccoli vagabondi, La Freccia azzurra, Gelsomino nel paese dei bugiardi, Atalanta, Il giudice a dondolo). 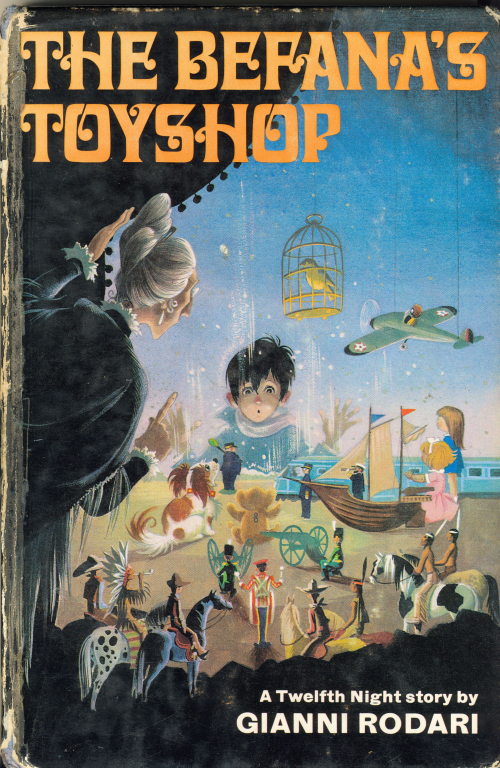 Freccia azzurra is a toy, a blue train, that little Francesco wishes to have as a gift from the Befana. In Italian folklore the Befana is an old woman who rides a broomstick and delivers sweets or presents to good children and a lump of coal to bad ones, entering through the chimneys on the eve of Epiphany. This tradition is much loved by children and is the second most longed-for holiday after Christmas. The tale first appeared as a serial in the children’s magazine Il Pioniere, then was published as Il viaggio della Freccia azzurra (Florence, 1954) and later retitled La Freccia azzurra (Rome, 1964). In Rodari’s story, the toys come alive and escape from their toyshop in order to reach poor children’s houses. The book inspired an animated film carefully crafted by director Enzo d’Alò in 1996, with stellar contributors such as actor Lella Costa and the Nobel Laureate Dario Fo providing the voices, and Paolo Conte and Miriam Makeba the soundtrack.

A pie in the sky The phrase “pie in the sky”, meaning “an unrealistic enterprise or prospect of prosperity”, is borrowed by Rodari in a surrealistic and hilarious way: the image of the metaphor is transformed into an actual gigantic pie flying above Rome. That is why Rodari’s tale La torta in cielo (Turin, 1966) sounds better in its English translation. In one of the interviews in the documentary Gianni Rodari, il profeta della fantasia, teacher Maria Luisa Bigiaretti explained how Rodari worked with her pupils at a primary school in Rome in order to co-create this story starting from the title-metaphor. The chimeric pie, which suddenly appears in the sky, is actually an atomic bomb that only brave children will be able to deactivate. Written in the Sixties during the nuclear war fever years, this pacifist tale aimed to present a difficult problem to children in order to open up a debate in the classroom and prompt their alternative solution to war.

Rodari believed that every children’s author has a duty to be as close as possible to his little readers so as to write stories with which they can connect and have an enjoyable learning experience. Reading must be a personal enriching pleasure above all, as Rodari stated: “La lettura, o è un momento di vita, momento libero, pieno, disinteressato, o non è nulla” [Reading is either a moment of life, a free, full and disinterested moment, or it is nothing (my translation)].

In Omegna, Rodari’s birthplace, the town council is keeping alive his legacy with a literary festival and a theme park, the Parco della fantasia Gianni Rodari, where children and their families are able to meet Rodari’s tales and heroes at any age, getting involved in one of the most exciting adventures that is literature.

Gianni Rodari, Telephone Tales (translated by Anthony Shugaar), to be published in September 2020

Posted by European Studies at 10:05 AM