This post is part of our ‘Inheritance Books’ series with the Americas blog, where colleagues choose an ‘inherited’ item that was already in the library when we started working here, and one that we have acquired or catalogued for our collections during our own time to ‘pass on’ to future users, visitors and colleagues, and explain why they’re important to us. This week, Marja Kingma, responsible for the Dutch collections, shares her choices.

It is a Latin edition of Rembert Dodoens’ Cruydboeck, or herbal, Stirpium historiæ pemptades sex, sive libri XX, printed in 1583 by Christophe Plantin in Antwerp. It was THE standard book on plants for almost 200 years.

We hold two copies, but my favourite copy is at shelf mark 442.i.6. 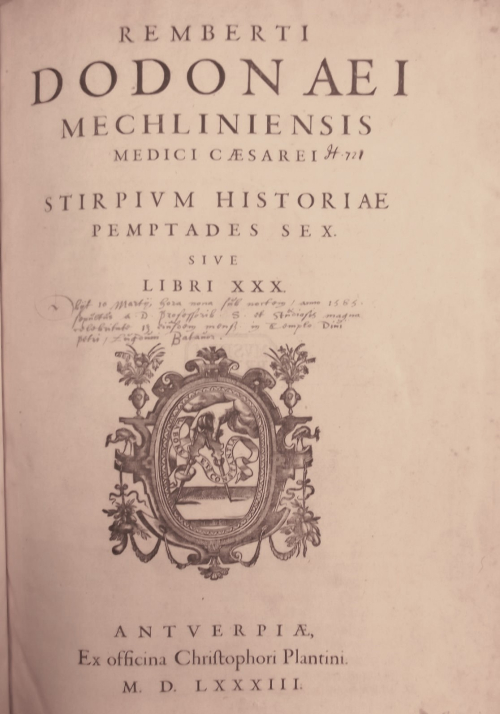 I had only just taken up my position as curator in January 2011 when I received an enquiry from a reader relating to this copy. I cannot remember what the enquiry was about, but I do remember my utter amazement and surprise when I opened the book.

It is full of manuscript notes, in the margins, in between text blocks and on inserted pages, crossed out sections, hand-coloured images of plants, cut out from some other book (another edition of his Cruydboeck, perhaps?). It had five dried plant specimens in it, now separately stored in a special case.

It was none other than Hans Sloane, one of the founders of the BL’s collections, who acquired this copy. His catalogue number is written on the title page (to the right of the words ‘medici caesarii’ on the title page pictured above).And it was none other than Joseph Banks, another founder of our collections who acquired the second edition. (442.i.7). I display both copies at show-and-tell sessions for visitors, where I lay them side by side so you can trace the changes made by Dodoens. We also hold many more editions of Dodoens’ Cruydboeck, as well as other titles written by him.

Last September BBC Radio 4’s Gardeners’ Question Time recorded an episode at the British Library. I asked the panel whether they could identify the dried plant specimens. It turns out they are all medicinal plants. I like to think they were inserted by Hans Sloane, which would make them 300 years old.

The link between Dodoens, a Fleming of Frisian descent who taught at the newly established university in Leiden, the city I was born in, with Sloane and Plantin makes this copy very special to me. The copy is digitised and will be available online via our website in due course.

The book I would like to pass on is a wonderful artist’s book, entitled Spijker-schrift, by the avant-garde artist Willy Scholte. This is also a unique book, for it is handmade and one of only six copies. Willy was self-educated as an artist and her handmade publications were usually issued in small editions 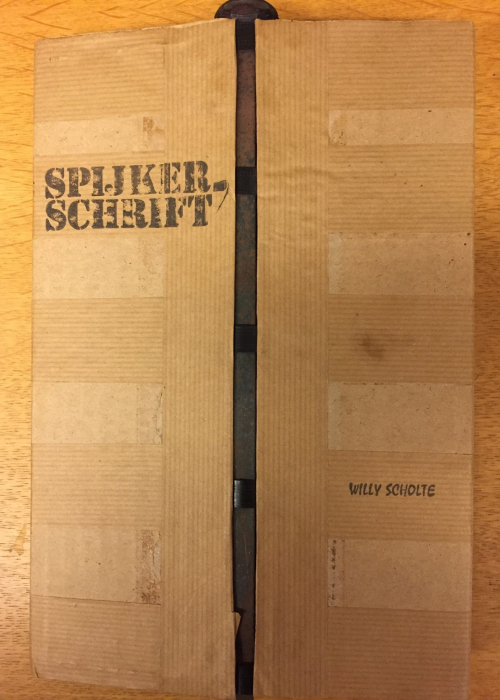 Scholte was one of very few women artists in Amsterdam working with Stempelplaats, an avant-garde printing house/artists’ studio in Amsterdam led by Ulises Carrion and Aart van Barneveld, from its beginning in 1976.

The book plays with the concept of nails. Spijker-schrift is the Dutch term for cuneiform, and there are two clay tablets with cuneiform texts, one a quote from the Assyrian period. The clay is of course modern. It is attached to cardboard ‘pages’, two of which have nails in them. The pages are wrapped in a cardboard cover, which is covered on the inside in words and texts relating to nails, produced using a stamping technique. You can watch a video about it on the @BL_European Twitter feed.

Spijker-schrift is a marvellous work and I am so happy I have been able to acquire it, thanks to a London based dealer who specializes in mail art, concrete art and similar avant-garde art forms from all over Europe. It is a valuable addition to our small but nice collection of works by concrete and mail artists from the 1970s and 1980s.

It is an art form I knew nothing about before I became curator, but I am getting to know it better and love it. I hope to write more about it in future.

N.B. Items mentioned in this blog were acquired and previously owned by figures who are associated with wealth obtained from enslaved people or through colonial violence.

Posted by European Studies at 11:13 AM